Bash from the Past: Imperial Guard vs. Crimson Fists 1500pts

(With my old haunt closing down soon, With my backup site closing soon, I'm re-posting a number of my old
Batreps here, hope you enjoy. Keep in mind when reading that some of the games were under old editions/codexes.)

After several schedule conflicts, finally managed to have my friend John over for a game.

I broke out my IG to give them a whirl in 5th ed, he brought his Crimson Fists SM. He's had them for years but I've never seen them so I was happy to get the chance.

We played on the city board I built a while back.

Lots of bling and upgrades to help make points, partly because John likes the bling and partly because he thought he didn't have some of the army packed when he was making the list (like his dread and landspeeder).

Mission was Capture and Control, Pitched battle (long table edges). He won roll off, chose to go second, so I picked the side and would deploy and move first.

On my left I placed the Ogryn and the Mortars supporting most of second platoon in a large building. The third second platoon squad was covering some fire lanes, then the tanks, then HQ and 1st platoon and HBs in a tall building that housed my objective towards the right side of the table. Sentinels decided to Outflank. 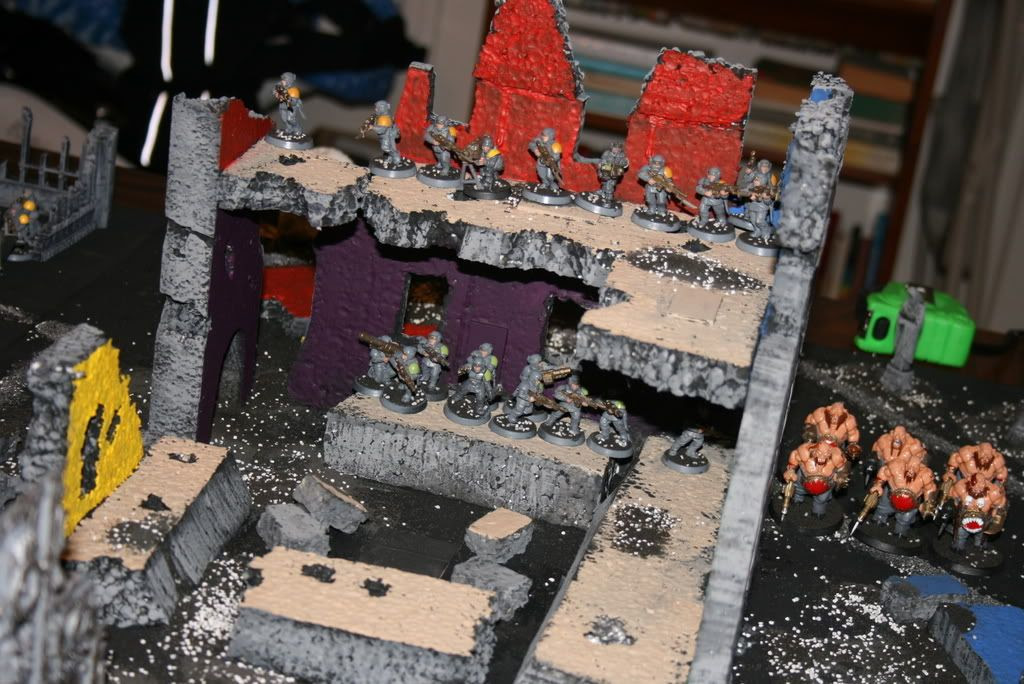 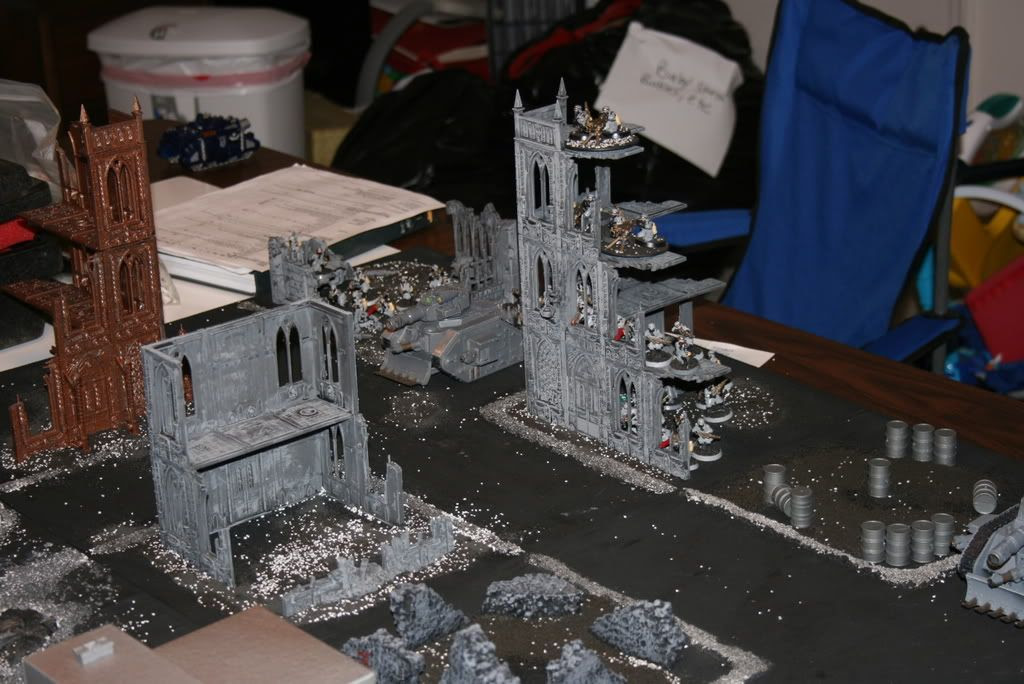 With a small elite and mostly mounted force, John took advantage of setting up second to concentrate his forces over to my left, which was also the side his objective was on (in his DZ). The devs took up high ground, foot tacs started on objective, two rhino squads positioned to barrel into my left flank. Bikes on the other end to harass me and hopefully pop some Russes/contest my objective. He forgot about his vindicator, so it started in reserve. 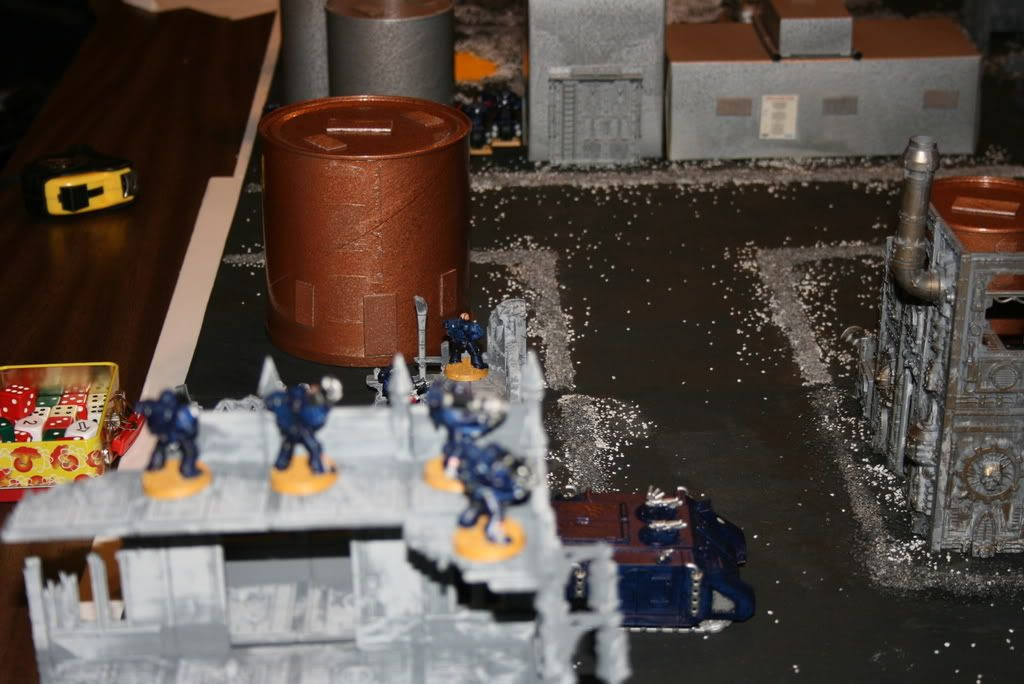 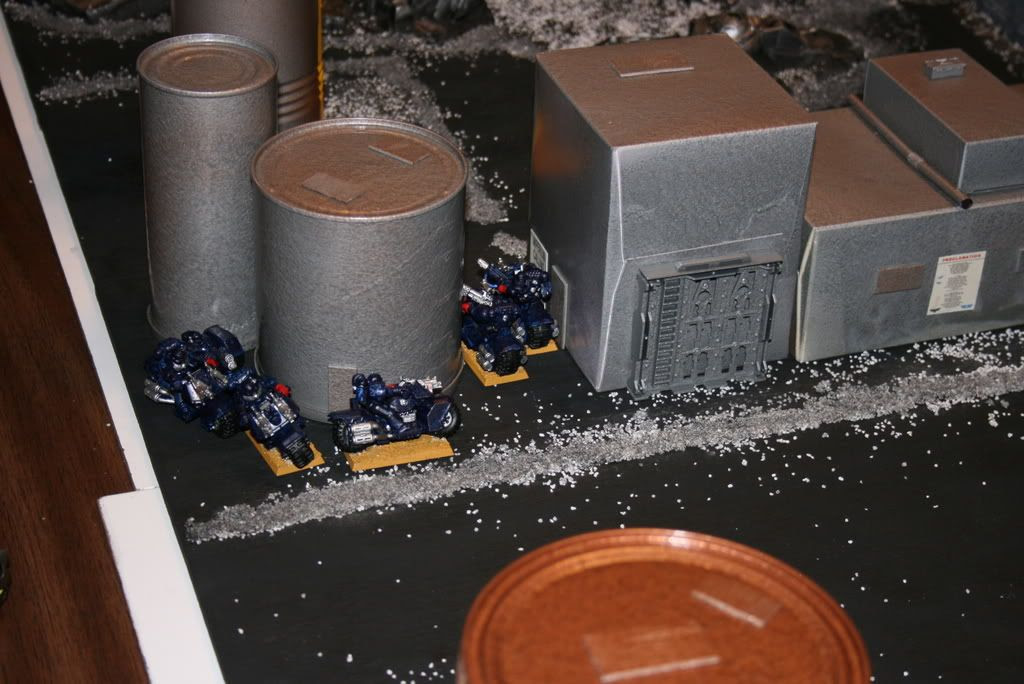 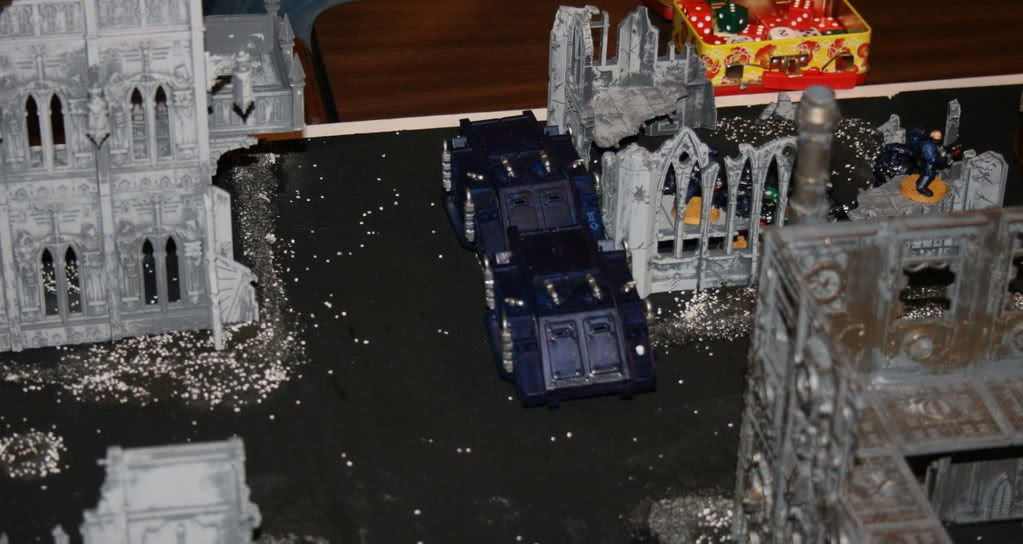 The marines tried to seize the initiative, but failed so the IG opened the show. With most of the enemy on the far side of the battlefield, units on the right flank started to shift over. The Ogryn picked their way through rubble and 2nd platoon stayed put and drew beads on the approaching Rhinos. 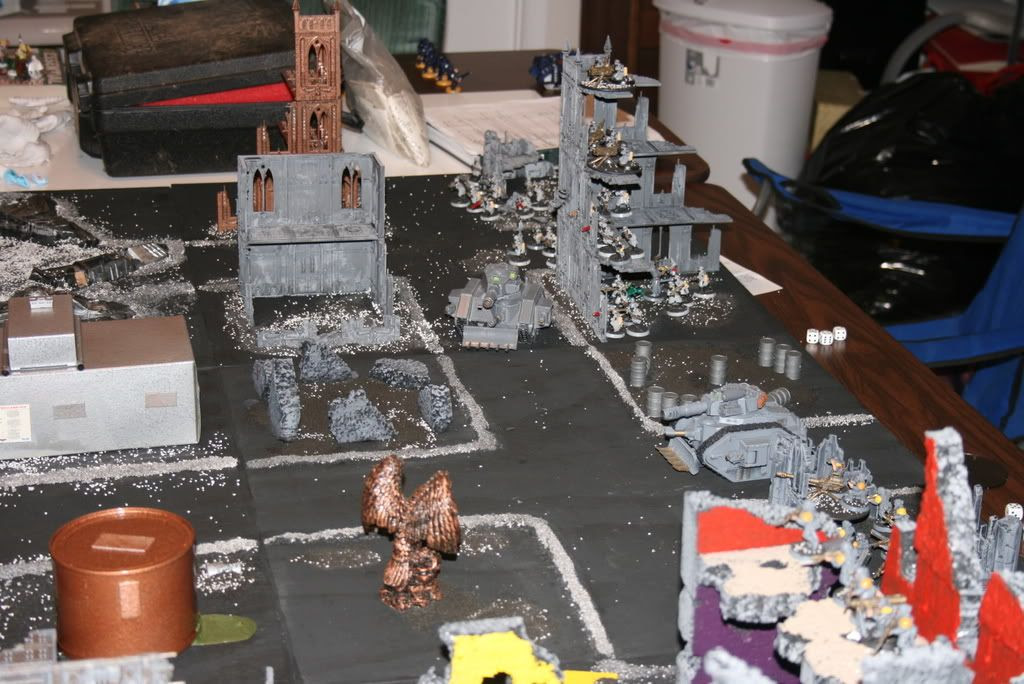 A glancing and a penetrating hit later, the lead rhino finds itself without a stormbolter and is shaken, so it can't fire it's stormbolter...that it doesn't have anymore. Hmm. Note one of the snazzy counters I made using spare bases. 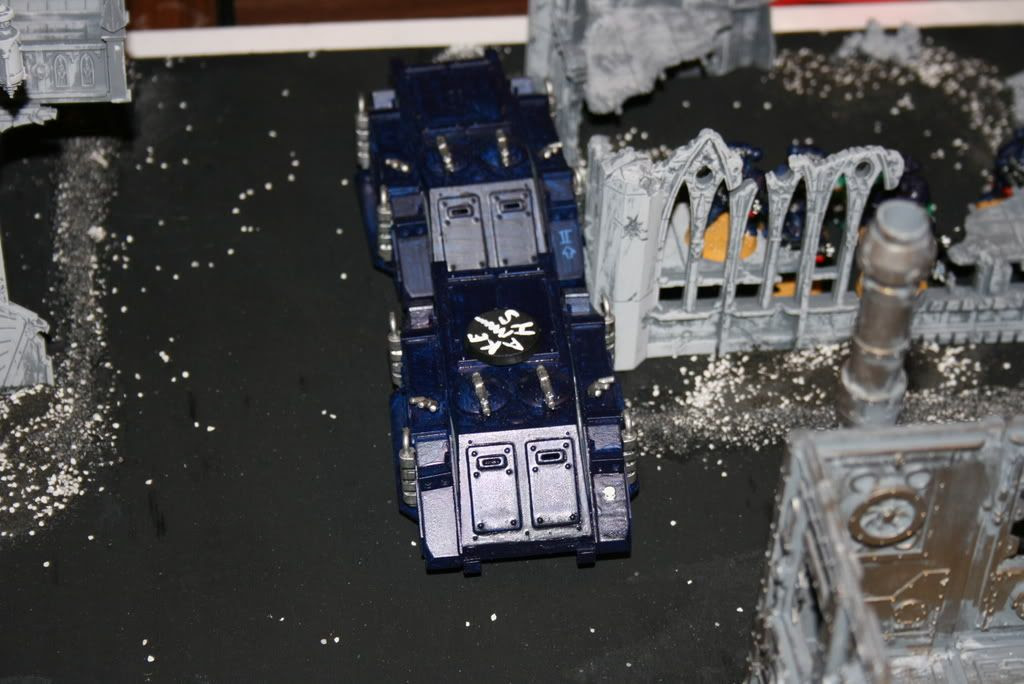 In the Crimson Fist turn, the bikes turbo boost forward to engage my right flank while the bulk of the marines surge forward on my left. Krak missiles fly out at the Ogryn, obliterating one. 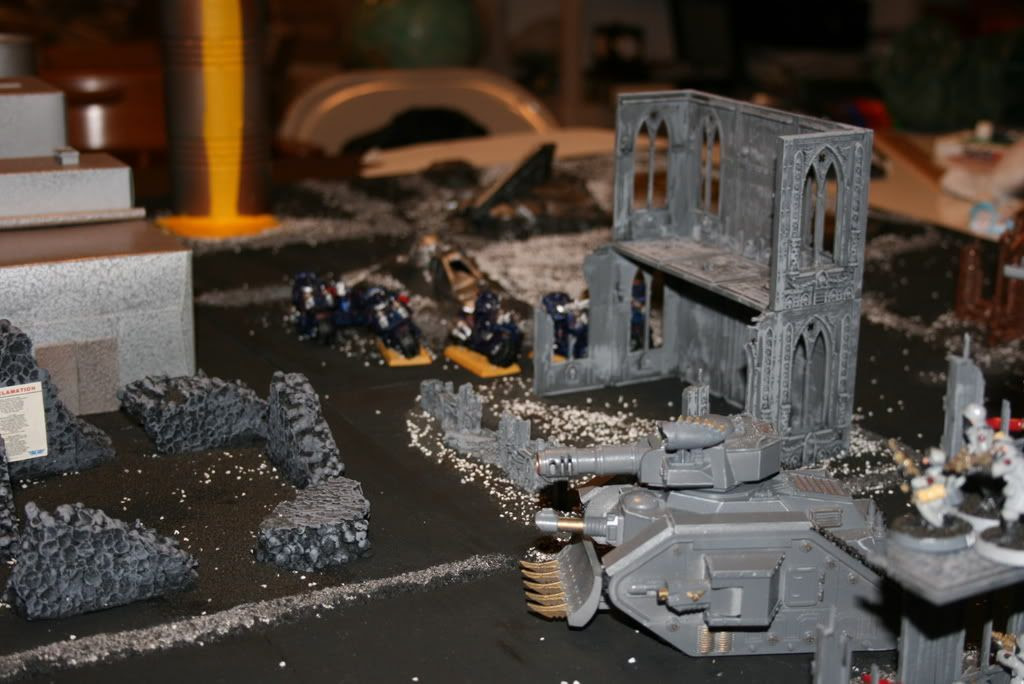 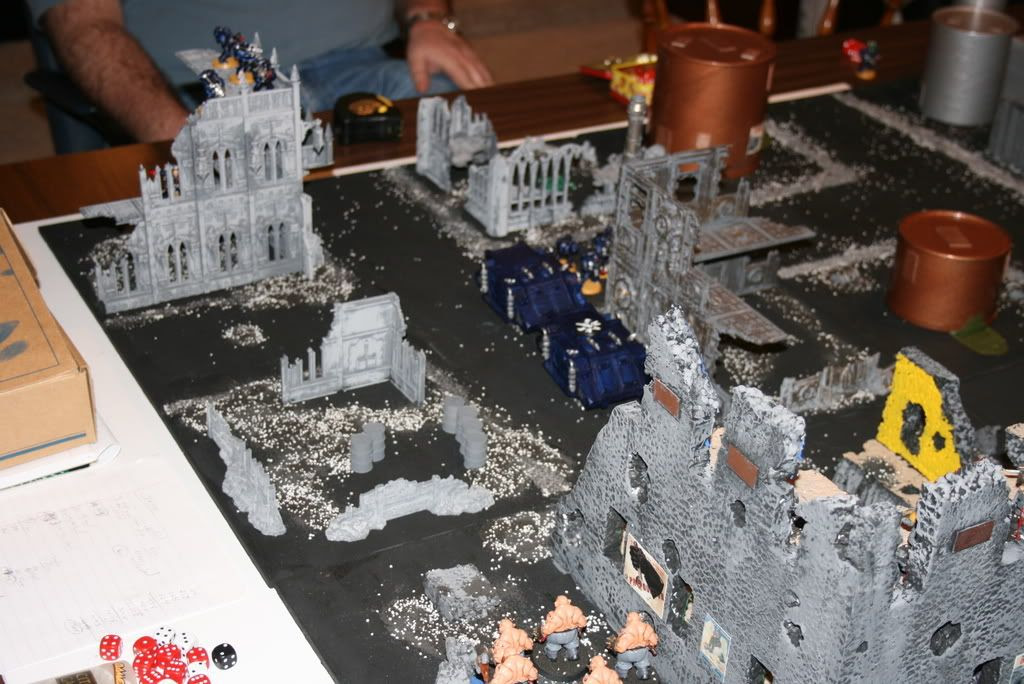 Turn two, loads of firepower dumped on the bikers, killing a few. When possible, John allocated shots on his attack bike with it's 2+ save, a practice he repeated later with artificer armor on marine leaders. Sometimes it worked, sometimes those big fat 1's came up. 1st platoon's Lt moved up to engage the bikers more directly if necessary, or at least try to draw them away from the objective. On the left, the lead rhino suffers an immobilized result, then another weapon destroyed...which flows up to wrecked. Rhino surviving four hits, not too shabby. The tac squad is forced to disembark, but pass their pinning check.

Oh, forgot to mention the mortars! For the first few turns got pretty lucky with them, getting a HIT on the initial shot or making good scatters. A lot of hits, a decent amount of wounds, but only picked off a few marines. Still, not bad, will definitely try to keep mortars around in the future. 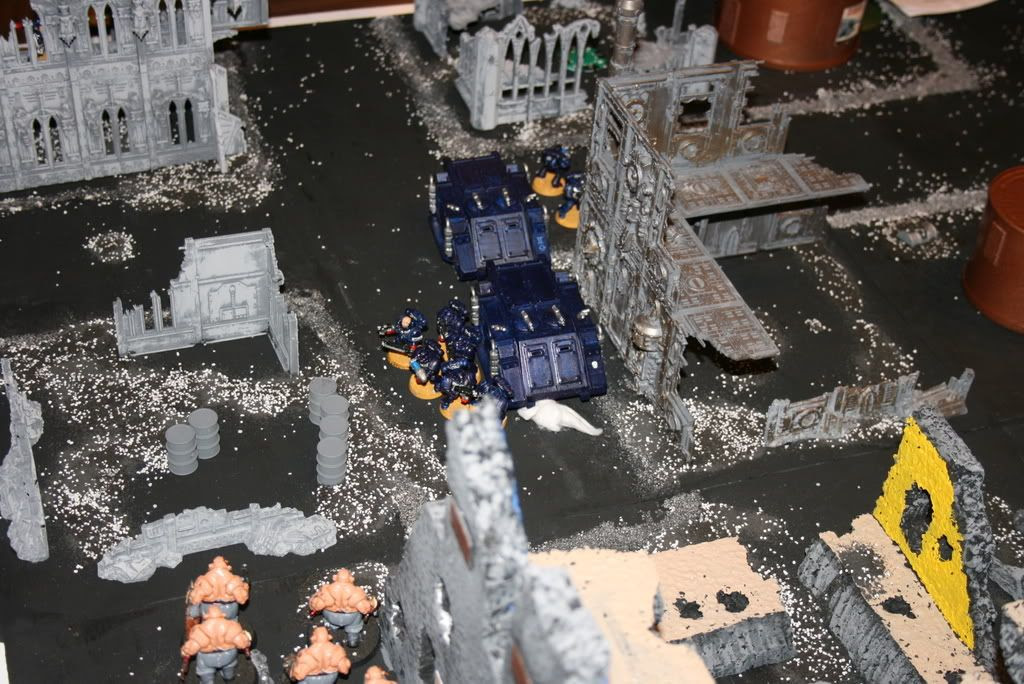 Bikes move up and flamer my right-hand anchor squad that was moving up. Allocated all the wounds to the ones closest to him, leaving the bikes out of assault range. 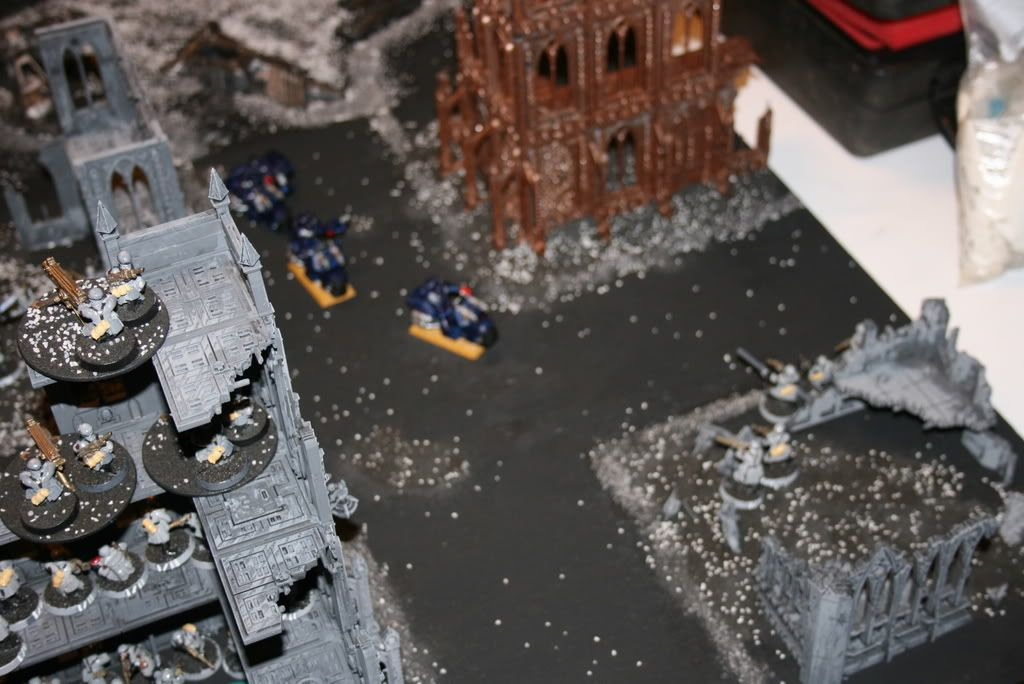 On my left, the foot tac squad moves up and command squad disembarks and joins up with the tac squad peeling itself out of burning rhino. They shoot up the Ogryn. Combined with more attention from the krak missiles of the dev squad, the Ogryn are down to three. (The green poker chip is the CF objective). 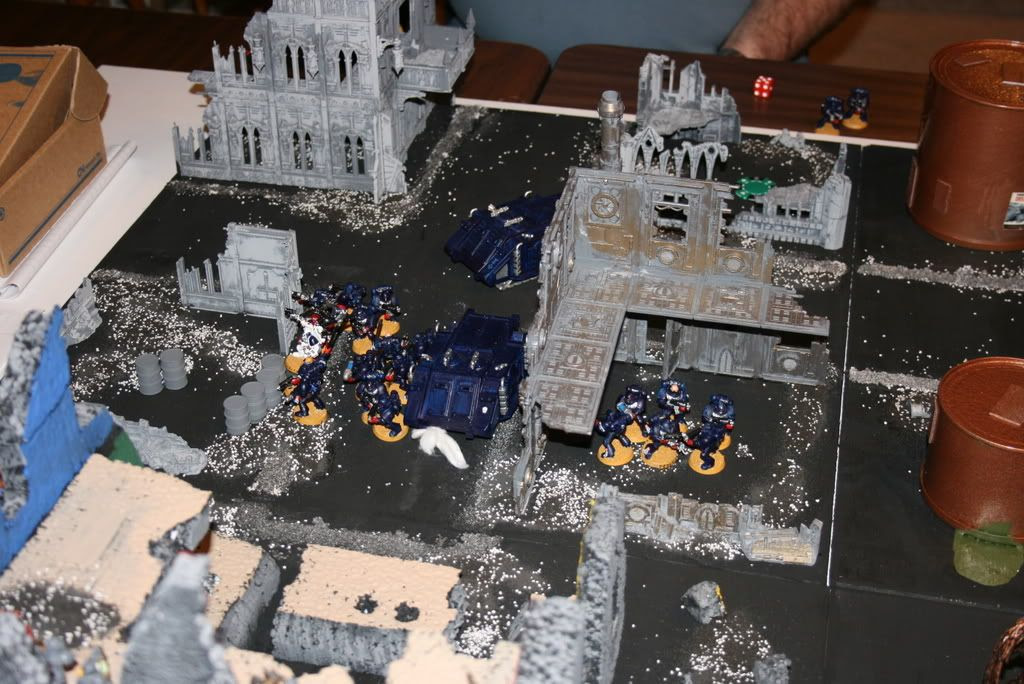 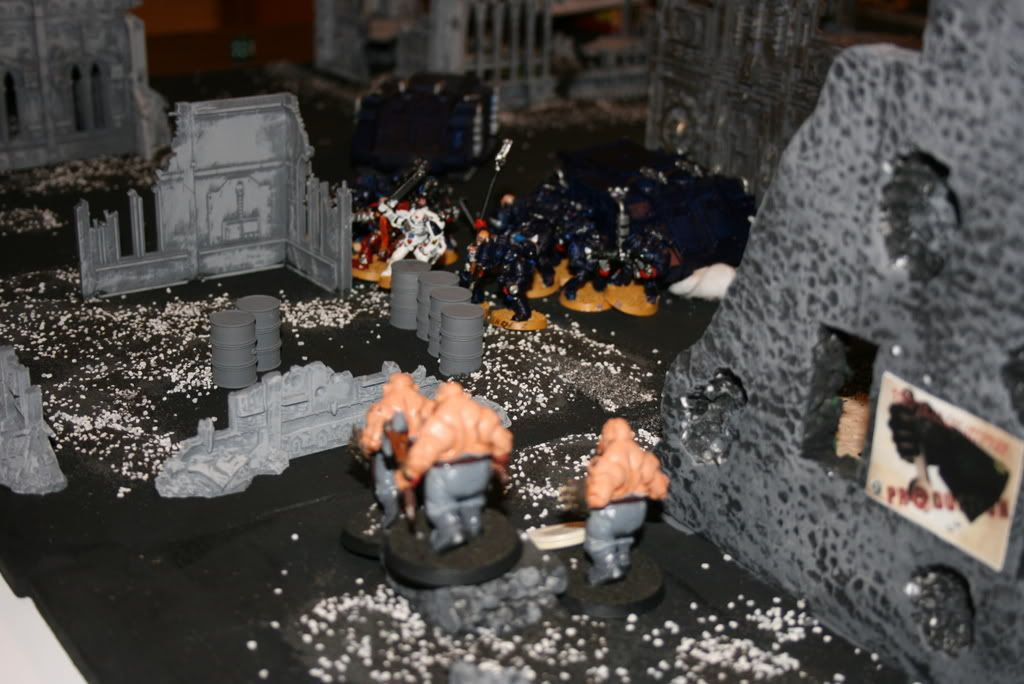 Guided to the battle by the sound of exploding Ogryn, the Sentinels arrive and start pouring multilas fire into the surprised Crimson Fist devasators. They shrug it off. 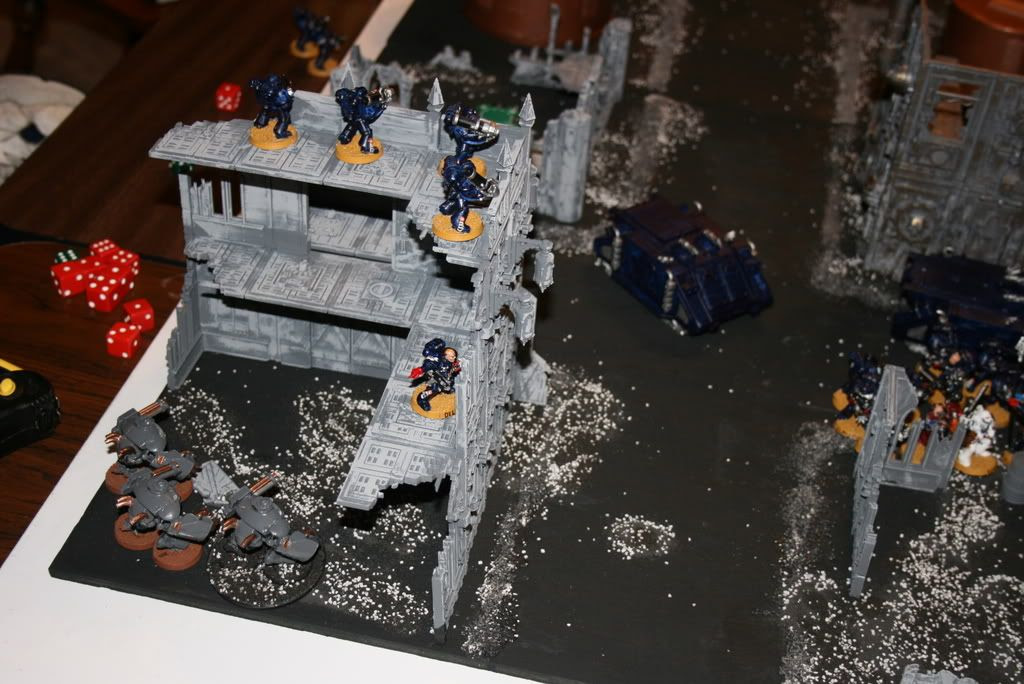 Ogryn Attack! Having been depleted by other IG fire, the CF tac squad of three is set upon by an equal number of Ogryn! 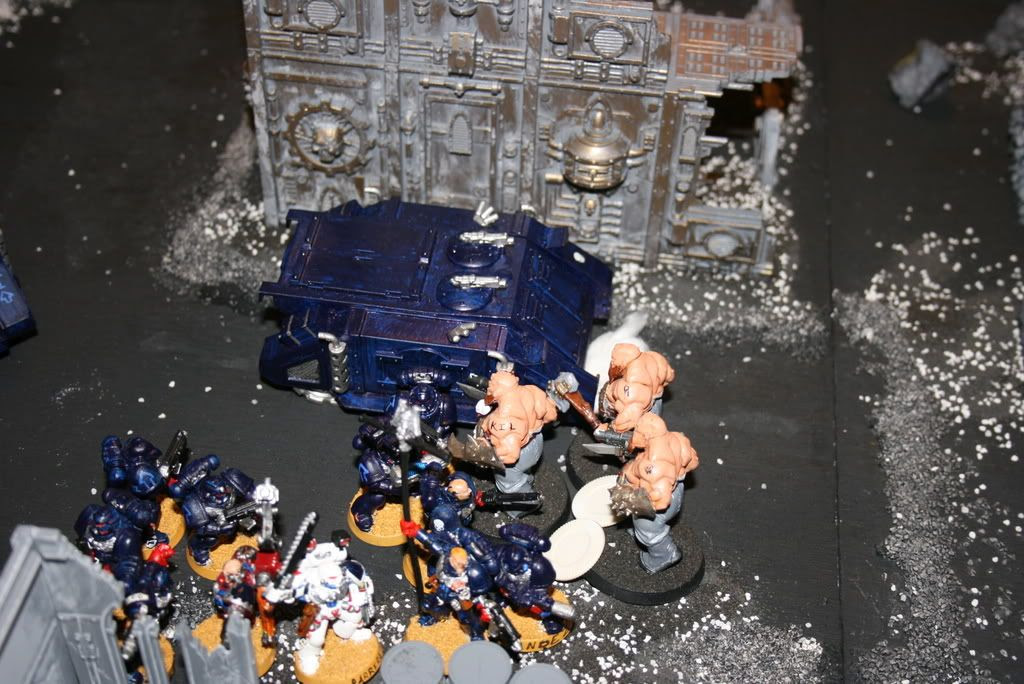 Ogryn Retreat! Three marines are more than a match for three Ogryn, especially if one of those marines is carting around a master-crafted powerfist. Bonehead high tails it away to get a change of trousers. Note another snazzy counter. 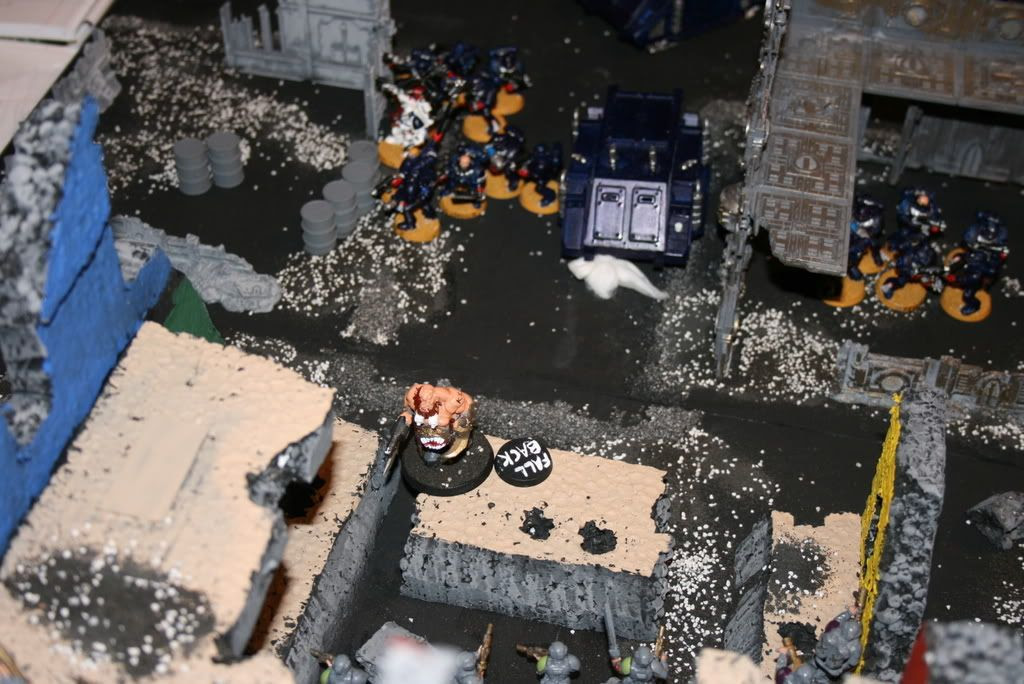 On the right, IG shooting cuts the bikers down to only the attack bike, who falls back to regroup, unfortunately too far away from the Lt's power sword. For now... 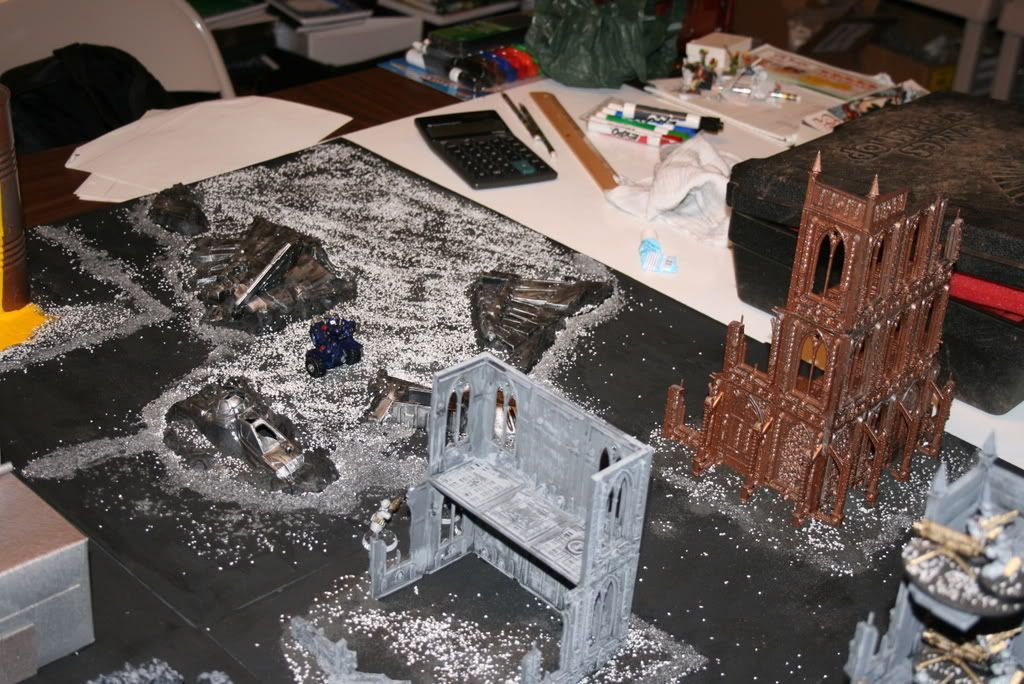 Marine Attack! Massively overpowered marines barrel into weedy IG. I don't think I even managed to get a swing in. 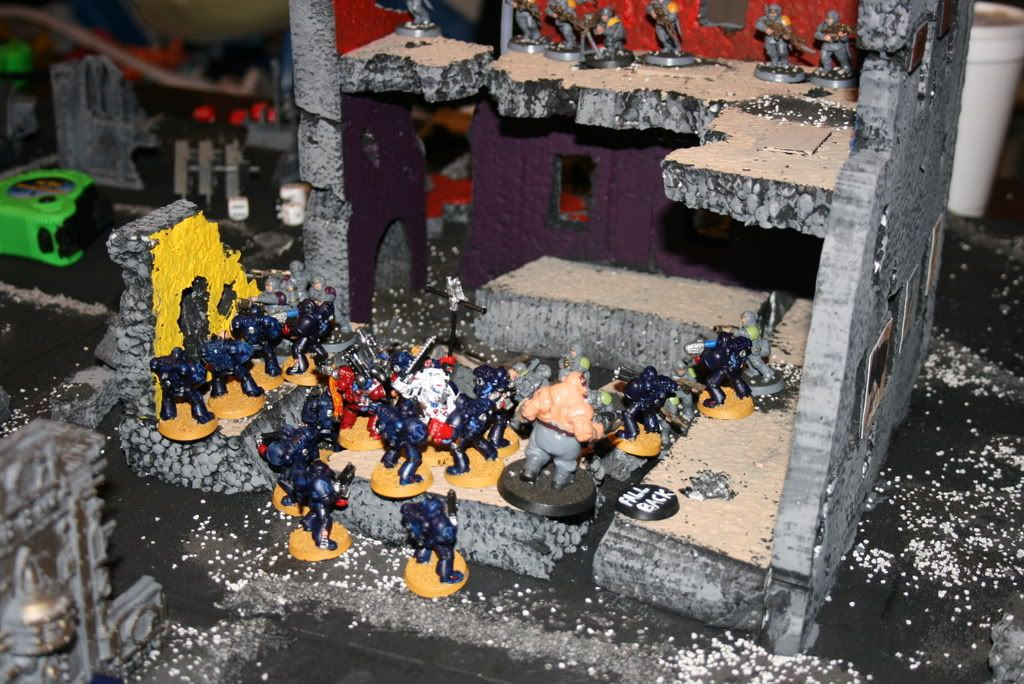 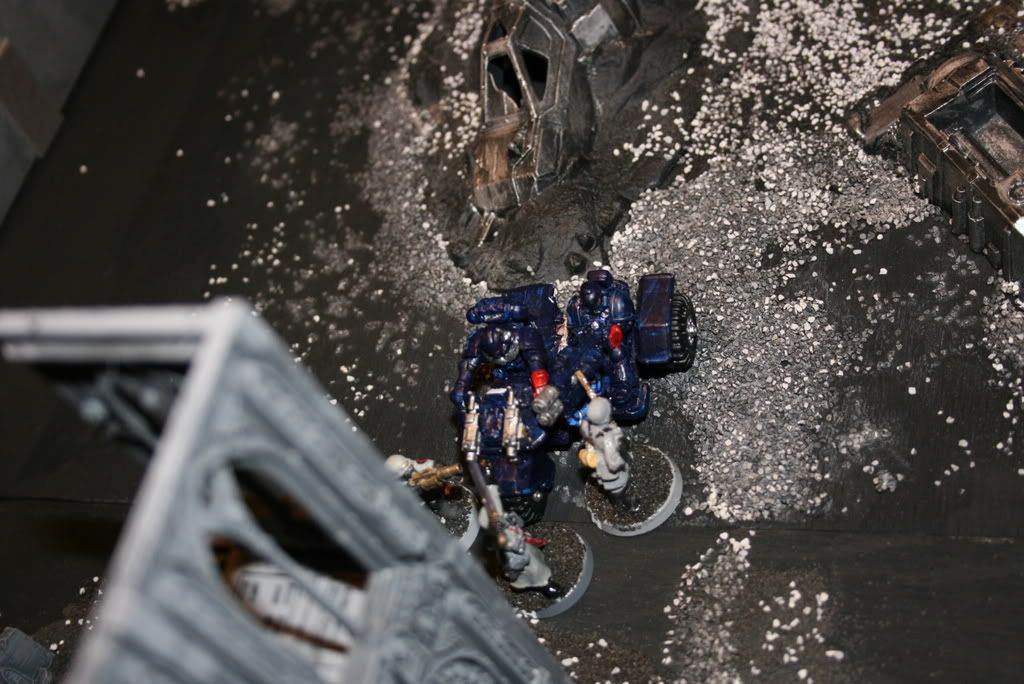 Some of 1st platoon move up to try to help the Lt! He proves capable enough on his own though, and eventually manages to get a power weapon wound in on the attack bike, finishing it off. 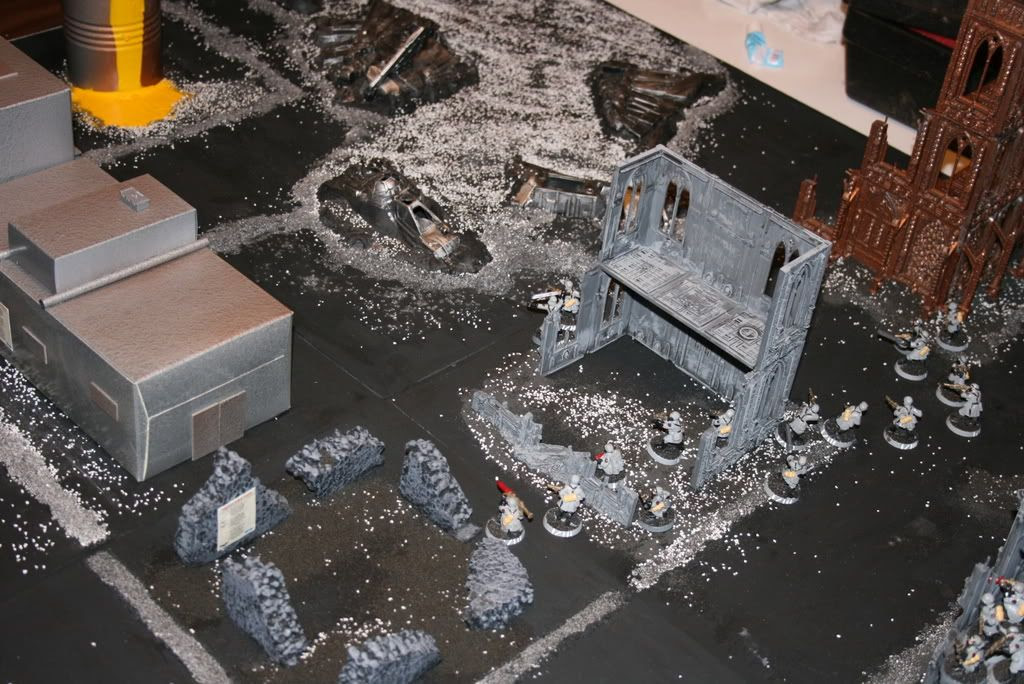 The Sentinels get rained on by numerous krak missiles and soon cease to be. While the Astartes slaughter their comrades, one of 2nd platoon's squads starts racing for the enemy objective! 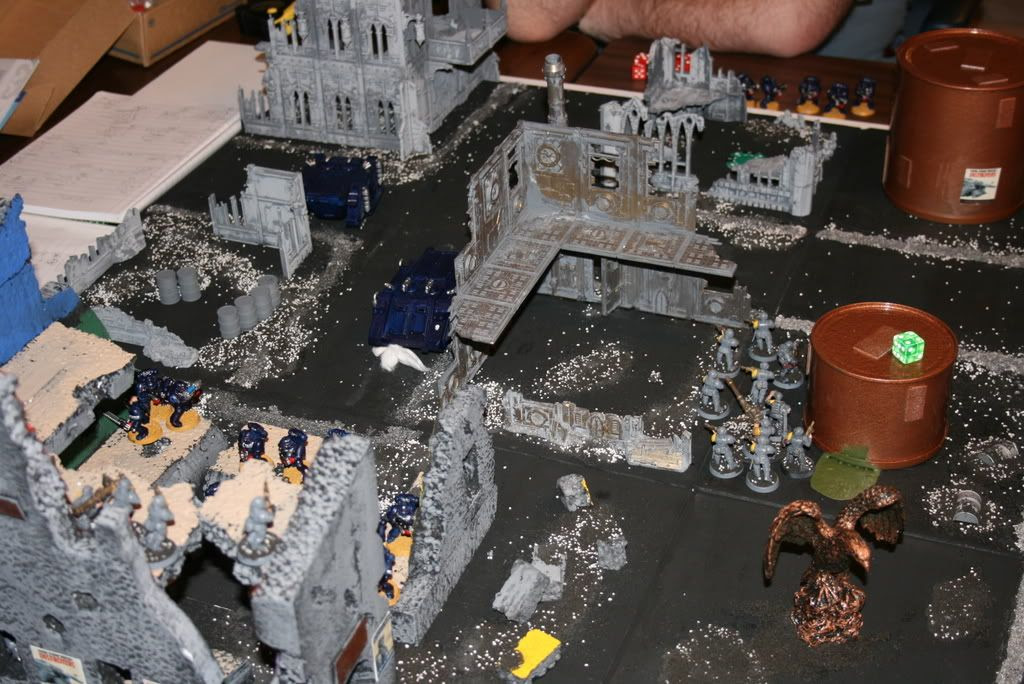 ...but it was not to be. The Vindicator showed up and killed a few of them, and the remainder got engaged by the foot-tac squad. Bayonets and some guts prove insufficient against power armor. 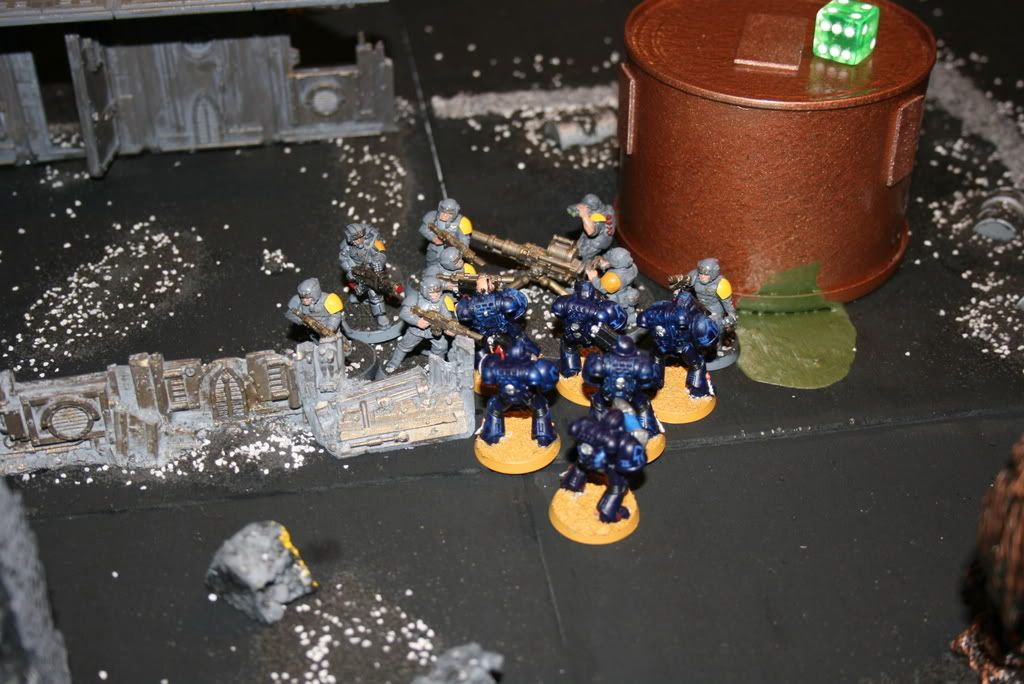 While his 400-some point command squad continued to rampage through the left hand building, John pulled his three-man tac squad back and jumped back in their rhino. They raced back to their objective, crashing through the wall at breakneck speed but avoided immobilizing themselves. Piling out they took up positions and affirmed their mastery of the chip. 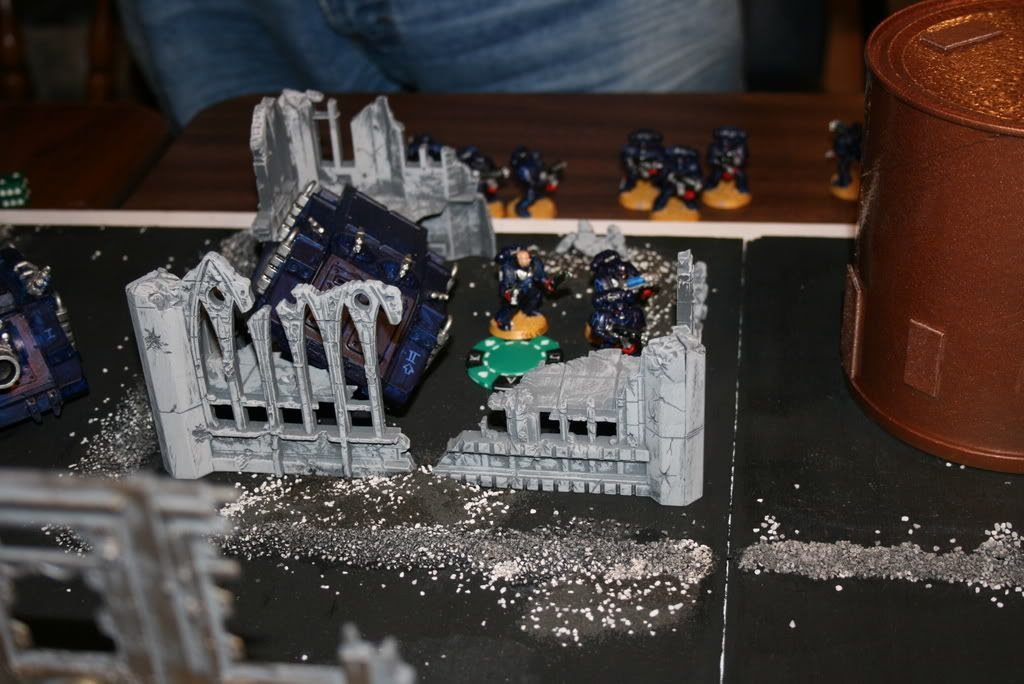 Crimson Fists wade through corrosive waste, and one succumbs to the acids. "With a name like Betcher's, it has to be good!" 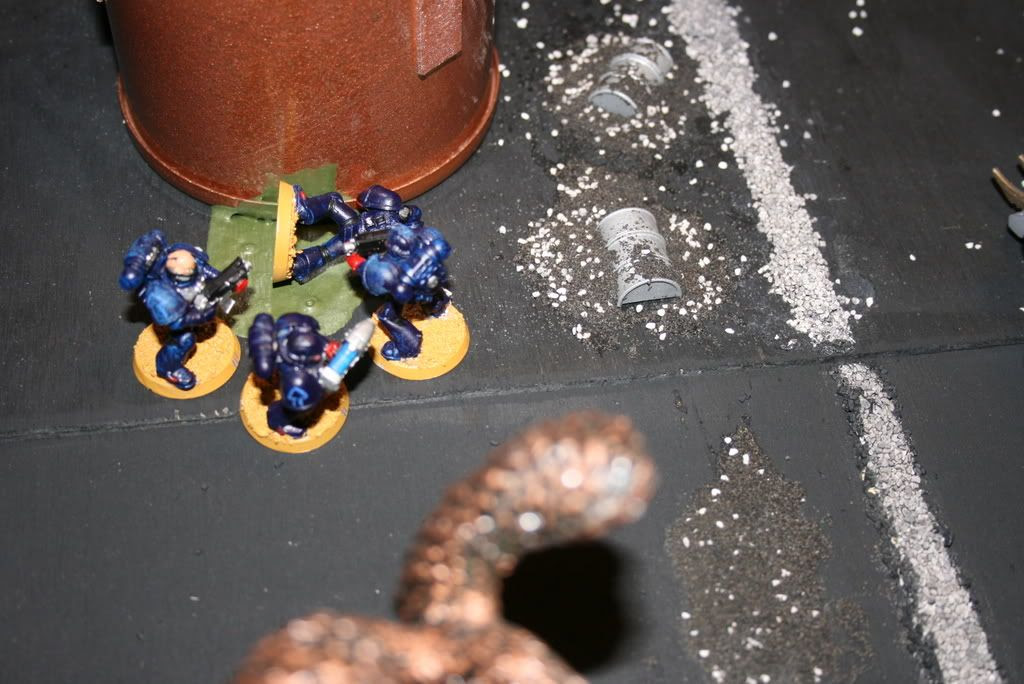 His battle-brothers that escape his end soon face their own as the IG pour it on, wiping the squad out, as a Leman Russ races up to try to contest the CF objective. 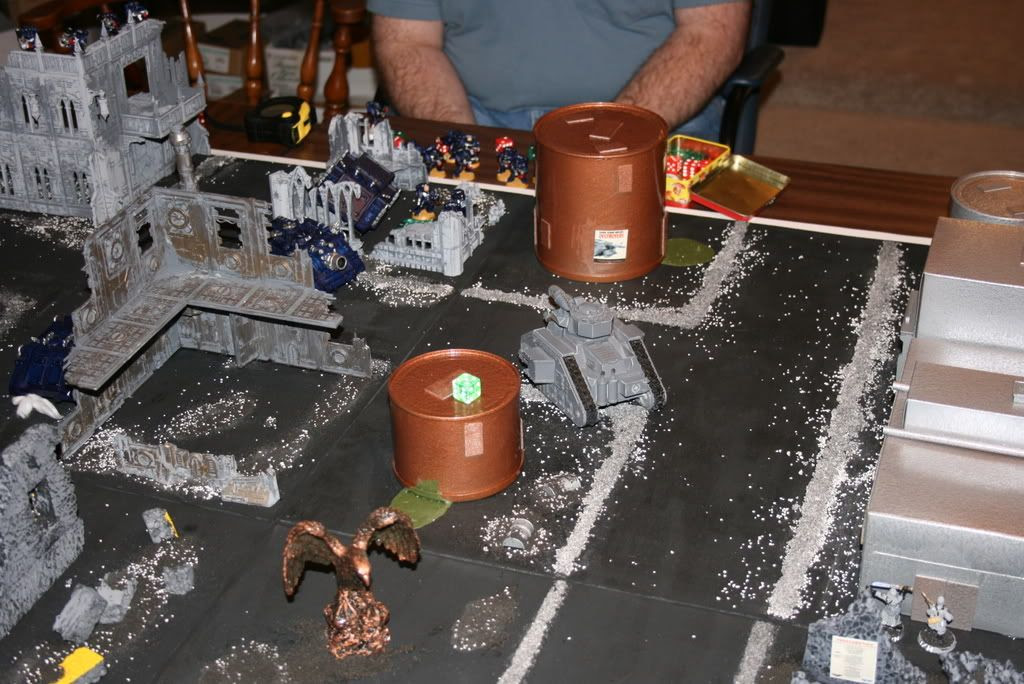 The devs fire...and manage to knock out the battlecannon. Will the tank make it?

Pulling up to near point blank range, the vindicator gives it a try. Scatter...but still on the hull! Roll to pen...penetrating hit! But will it be enough? 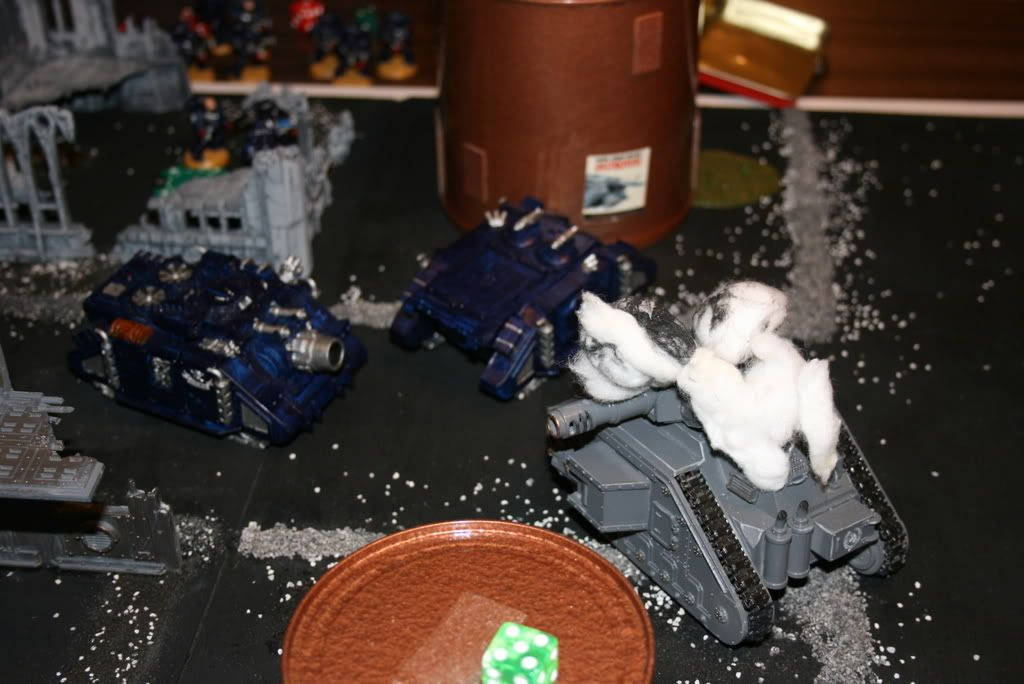 The game technically would have continued on, but we called it at that point. We each held our own objectives but didn't have anything that could conceivably contest the other one by the end of turn 7. So we ended with a draw after a fun game. I'll take that!

While setting up second was probably a good idea for John, I think he went a little too heavy on my left. He could still have easily defended his objective even with one less squad, and probably still would have rolled over that flank. If he had taken his command squad and paired them up with the bikers, I would have had a hard time stopping them from hacking their way to my objective. Might have been possible, but would have been tough.

Forgetting the vindicator actually worked out for him I think. If it had been on the table from the start, more likely would have been destroyed or had the cannon blown off at some point. As it was, came in at the right time to help fend off two threats to his objective.

My big error in-game was not taking the time to knock out the second rhino. In the end that's what enabled him to get the out-of position tac squad back to control his objective. Without it he would have been too far away and at best would have been able to contest his own with something else (like the vindi) and I would have won.
Posted by sonsoftaurus at 8:00 AM