Bash from the Past: Dining Room...of Death! Tau vs. Crimson Fists 1850pts

(With my old haunt closing down soon, With my backup site closing soon, I'm re-posting a number of my old Batreps here, hope you enjoy. Keep in mind when reading that some of the games were under old editions/codexes.)

Gave my assembled but not yet painted Tau from the Tale of the Eternity Gate Gamers a test drive with the help of my friend John and his Crimson Fists.

I won to pick sides/go first so set up first: 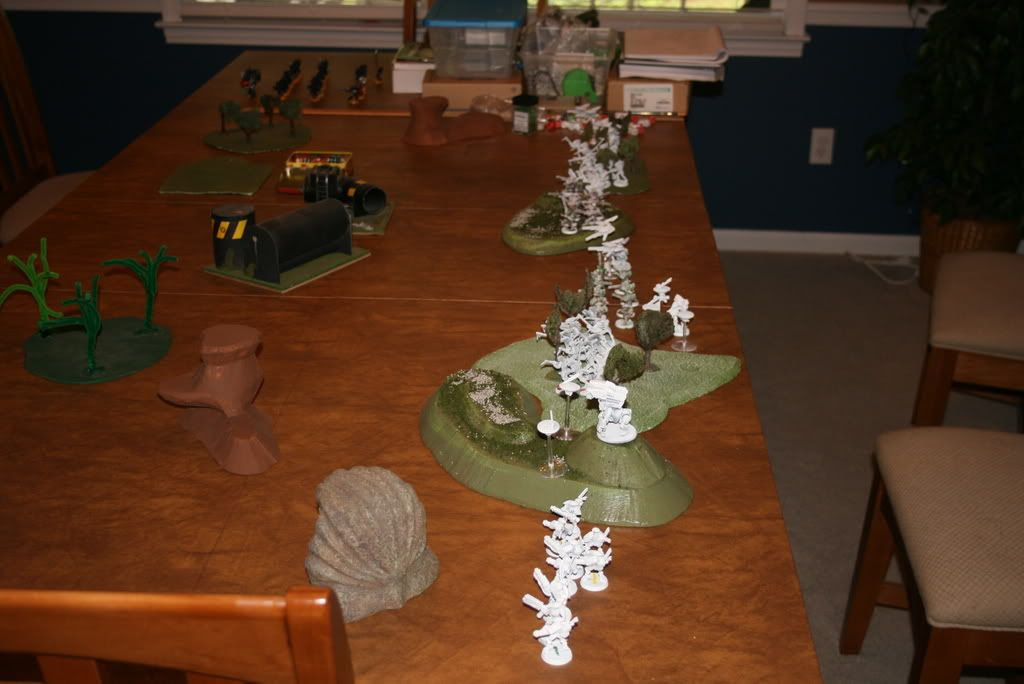 The Vespid are kept in reserve, and two Kroot squads are sent to Outflank.

Marines set up in force on their right flank. They roll to seize the initiative, and do so! Rhinos rumble forward. 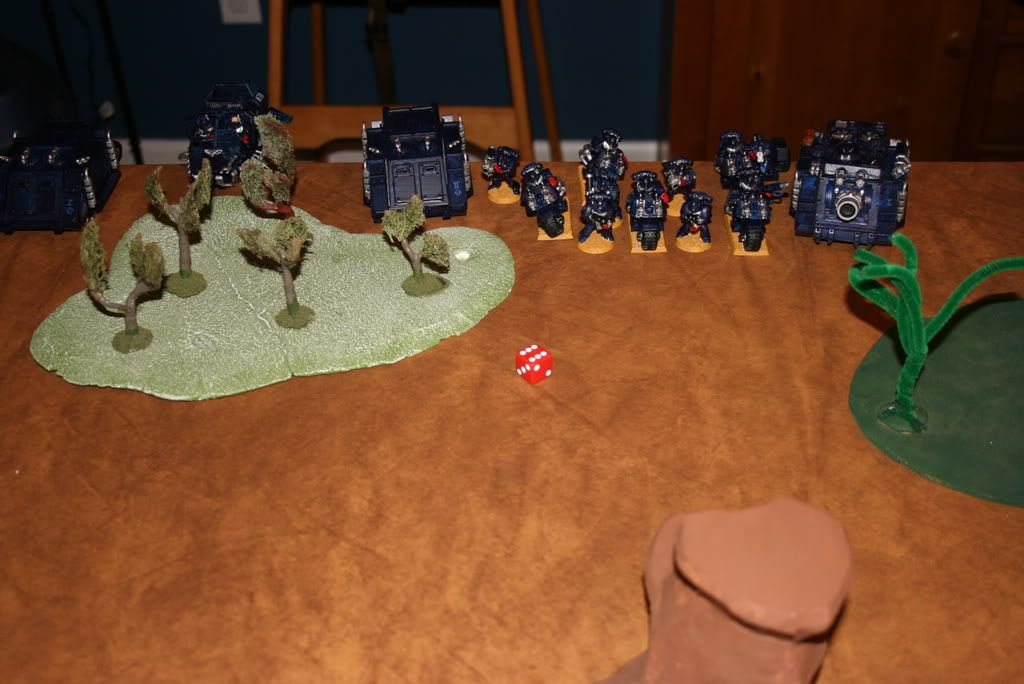 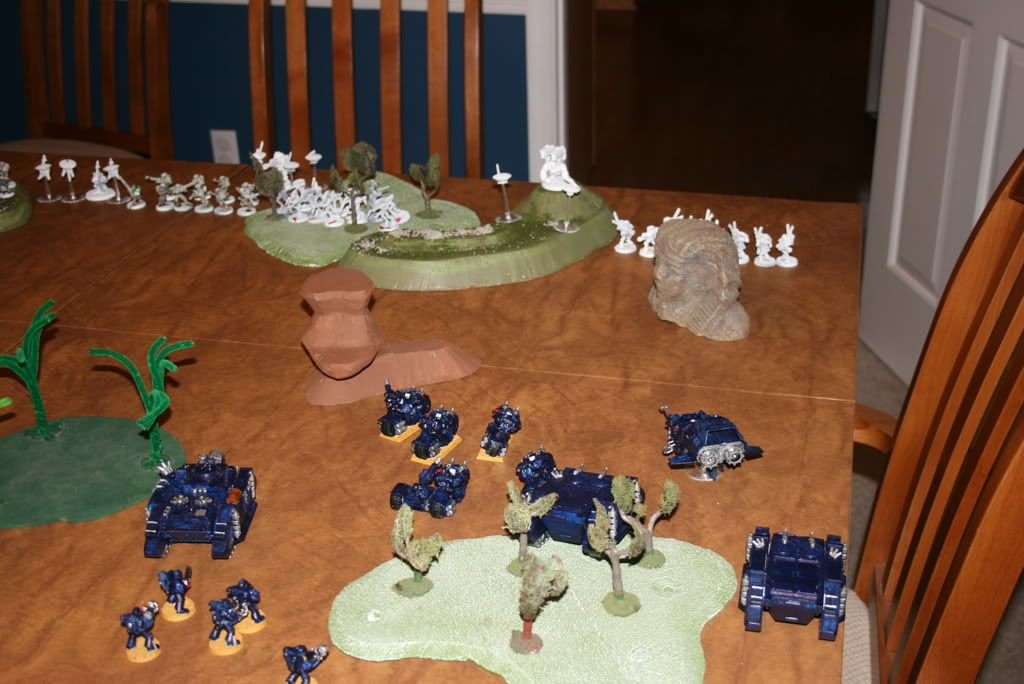 Marine firepower manages to strip a shield drone off of the Broadside on the hill. Thanks to Shadowsun being nearby, passes morale.

Tau first salvos manage to pop one rhino from a cross-table broadside shot, and stealth suits bring down the landspeeder. 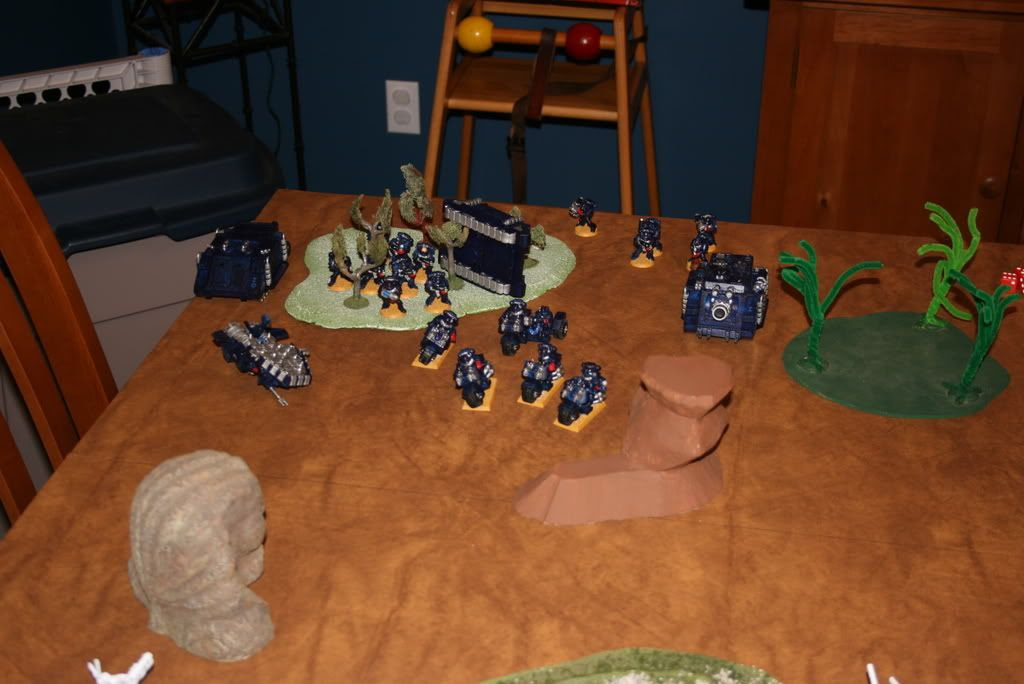 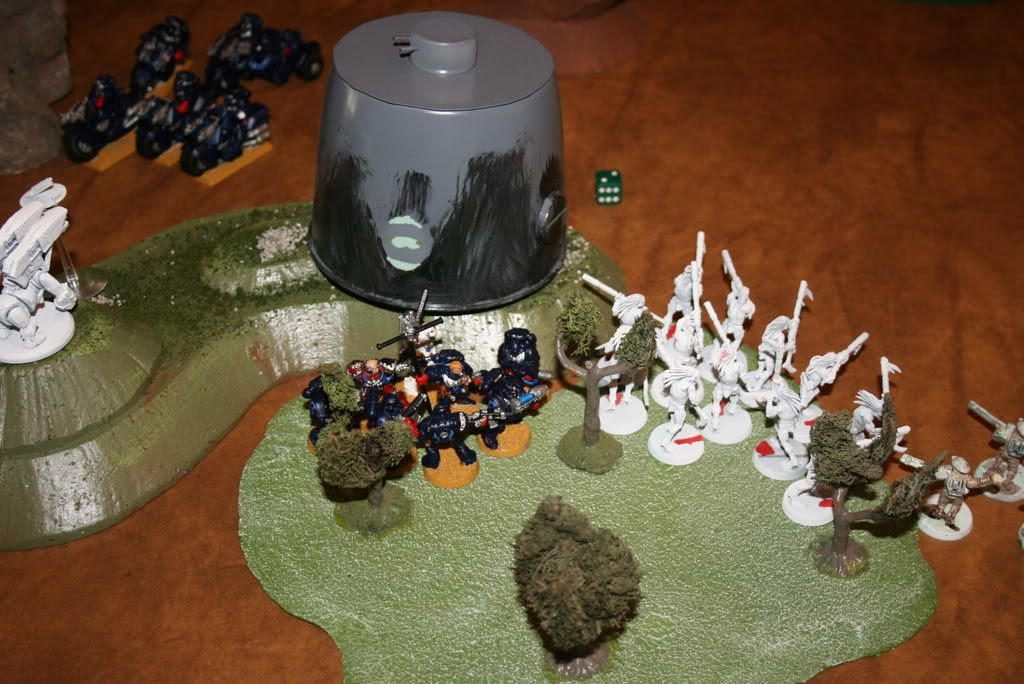 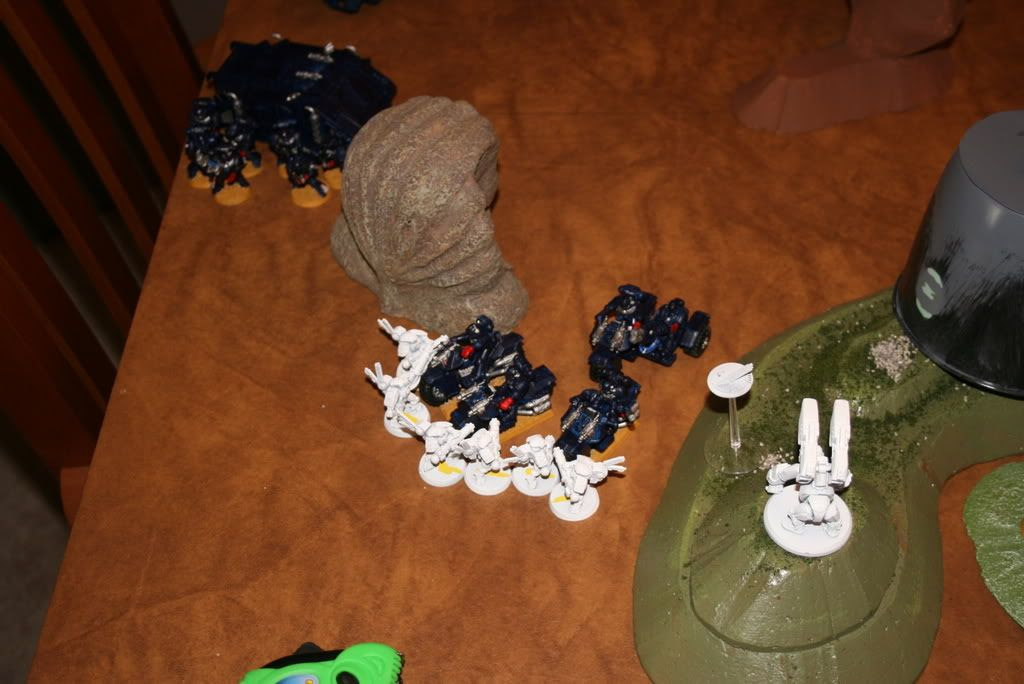 One Vespid unit arrives, kills a biker but then is quickly run off the table. 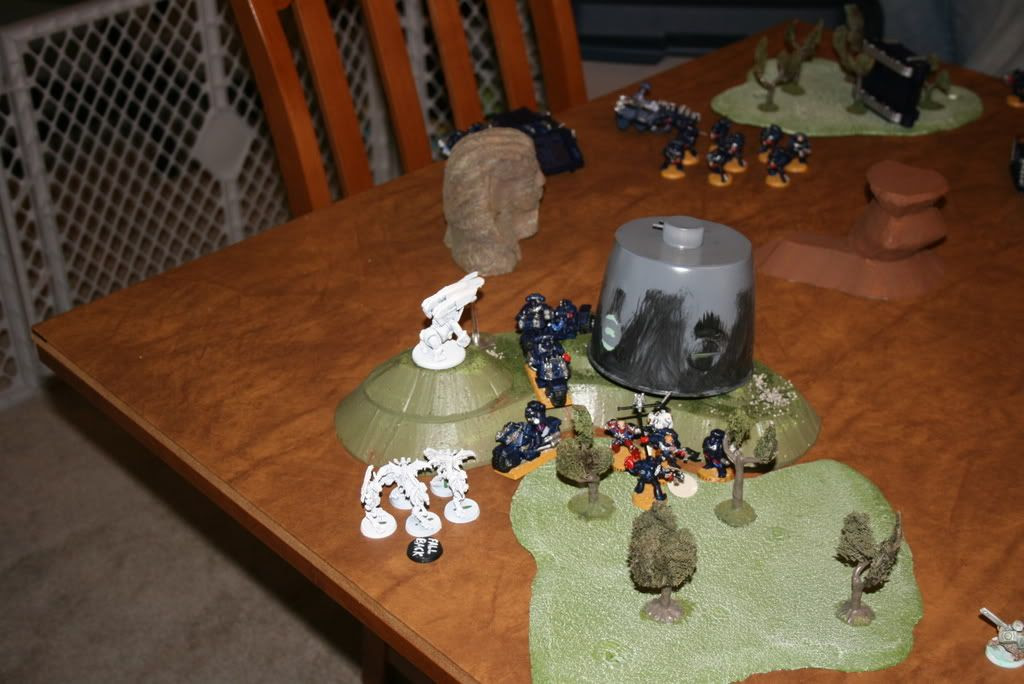 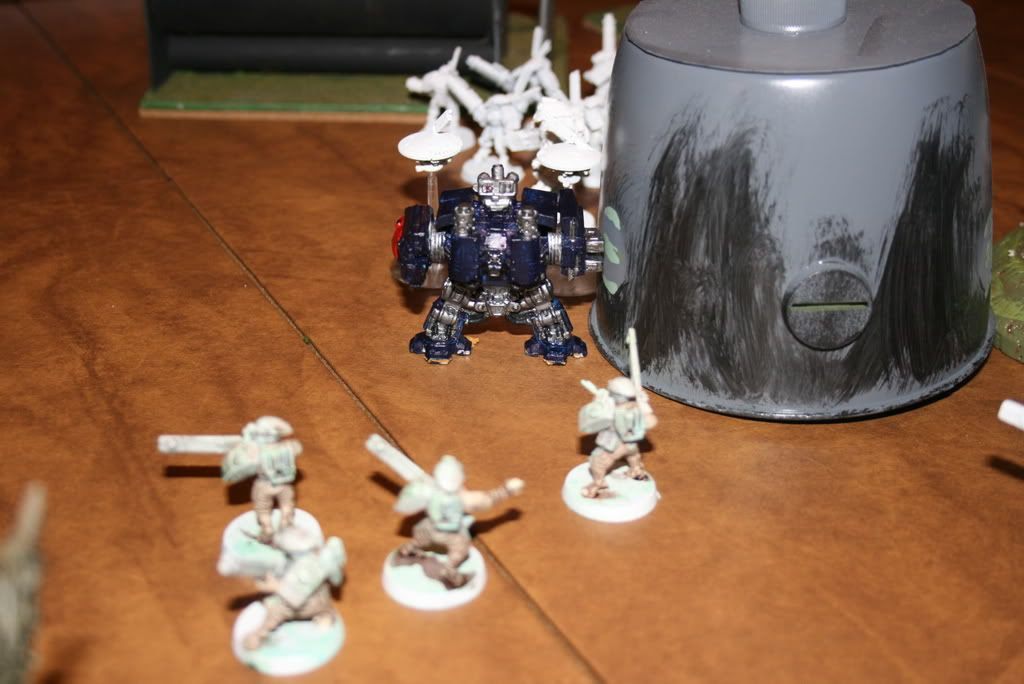 Remaining Vespid and outflanking Kroot arrive to attempt to turn the tide of the battle. Unfortunately marine resiliency keeps their impact small. 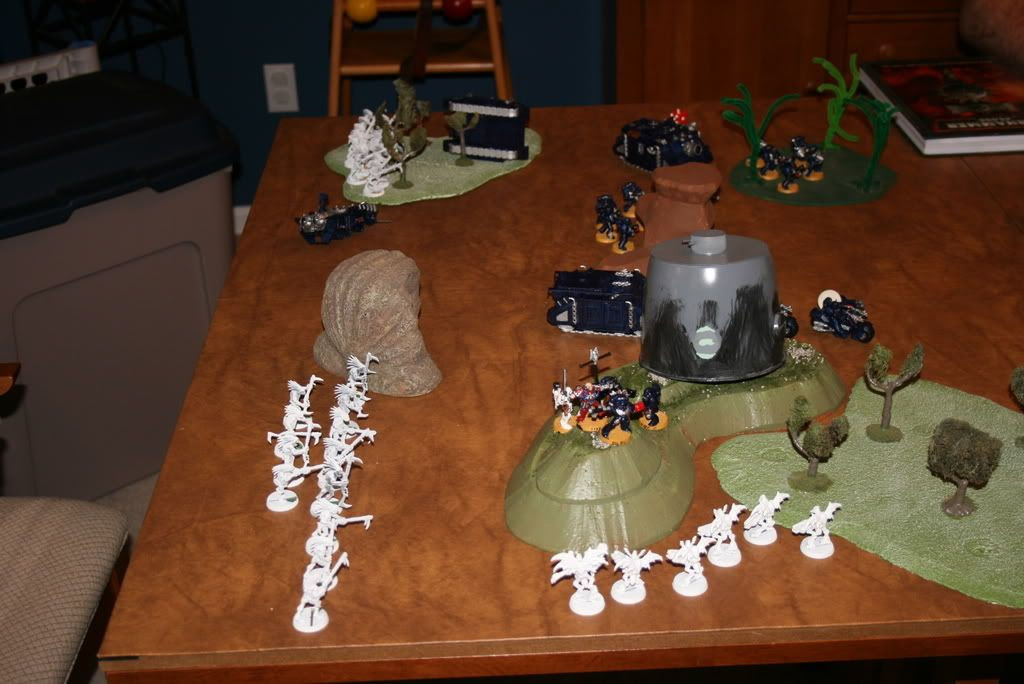 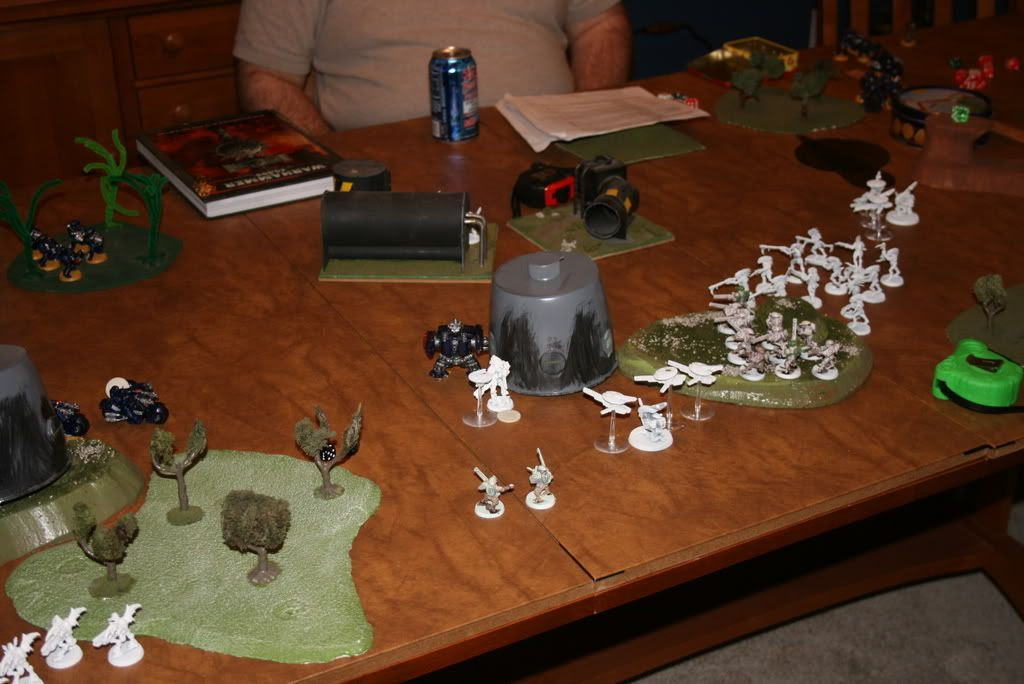 ...and proceeds to miss once, roll double 1's for penetration with the other getting a glance which is ven-rerolled down to a shaken result. <_< What's the Tau word for "Doh!"?

Meanwhile surviving stealth team starts maneuvering away from dread and towards better targets, and the marines and command squad having finished off the flanking forces leg it towards the new focal point of the battle. 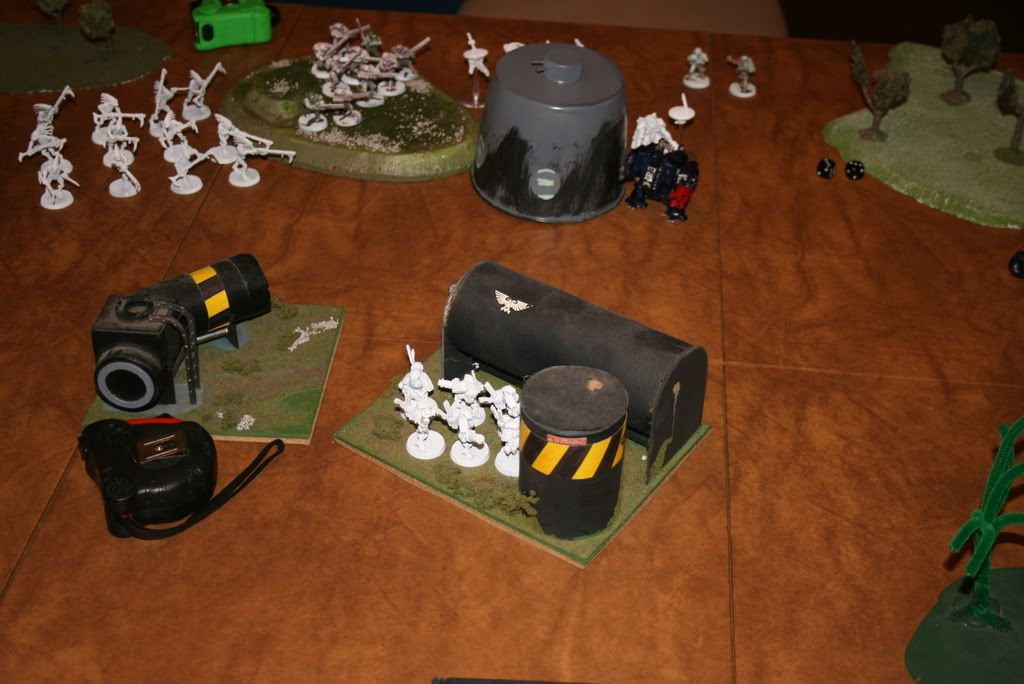 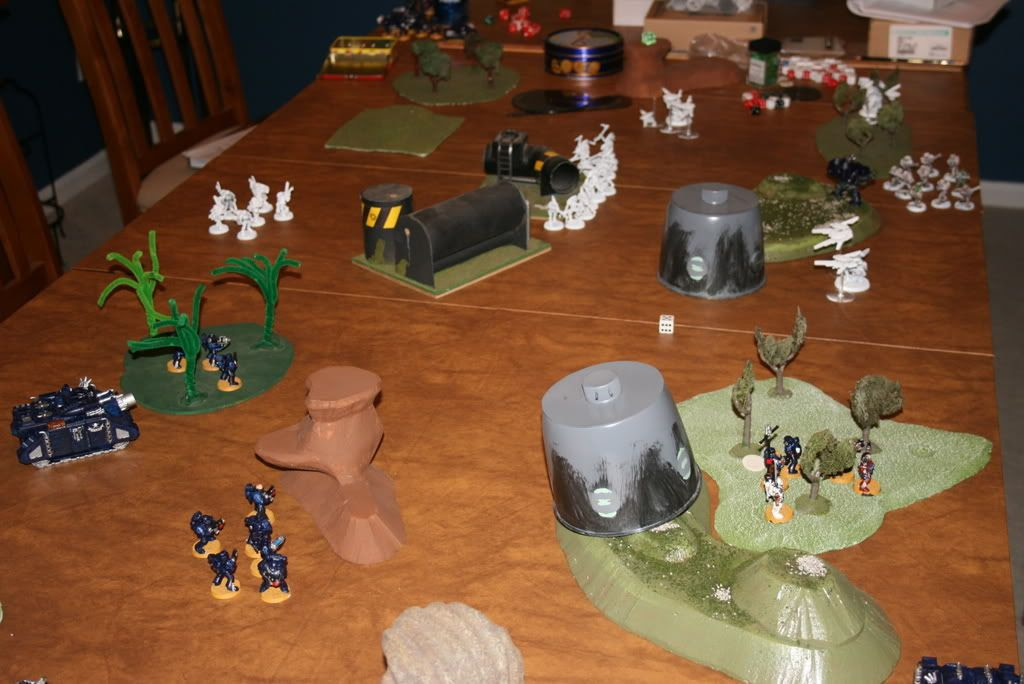 Dread manages to pulp Shadowsun who really can't do anything to it in CC, then moves on to skrag remaining Fire warrior squad that couldn't backpedal fast enough to get away.

Made a bunch of mistakes, and the series of bad rolls against the dread helped speed up the landslide.

I shouldn't have spread out as much as I did, treated set up more like an objective mission rather than a kill-em-all fest. Concentrating my firepower more would have enabled me to actually put hurt on the enemy before he closed, though the drop pods might have been even more effective.

Should have infiltrated the stealth teams rather than setting them up normally. With the marine concentrated deployment could have more easily harried their flank while they tried to close with the static fire base.

When the Kroot and Vespid arrived from reserve, should have concentrated them more and tried to put serious hurt on the command squad. Rapid fire them once, let them charge and wipe out one squad, rapidfire again with the other.