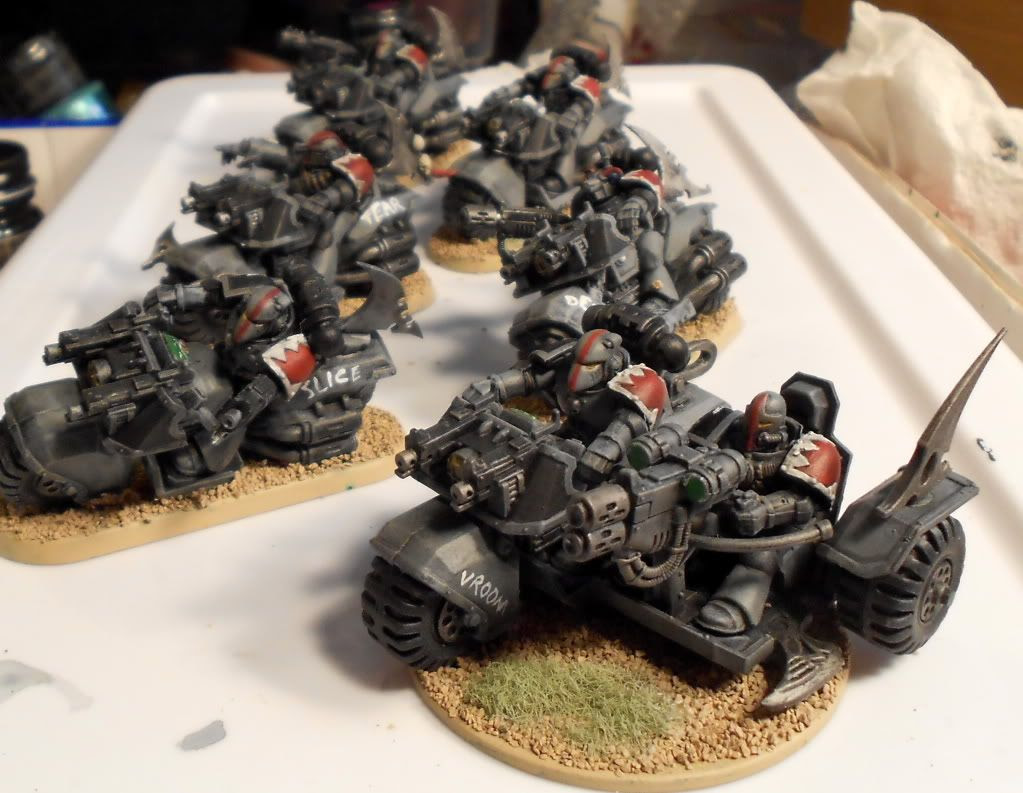 Finished my small Space Sharks biker squad yesterday, namely doing the attack bike and then basing everyone.  I also found out what my decal issue has been, using the micro set stuff and then spraying apparently causes the fuzzing.  Allegedly putting gloss sealer on the area first avoids that problem; next time I'll try doing gloss before and after the decal, then matte spray later, see if that works better.

Sunday I got in two league games at the new, higher 750pt level with the Space Sharks.  I added in the bike captain and the whirlwind to the two tac squads I already had for 500pts.

No pictures of the battles, but just as well as they weren't that exciting!
Read more »
Posted by sonsoftaurus at 9:56 AM 2 comments: 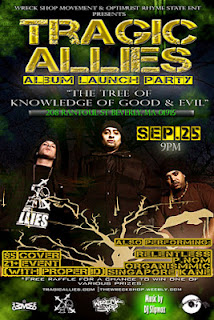 But there are certainly many more ways to use them; many more possible combinations.  But what is really interesting me at the moment are the possibilities for counts-as, whether simple or deep.  Especially for the armies that are Brothers in Arms and effectively function like one army, there are a lot of possibilities.
Read more »
Posted by sonsoftaurus at 9:33 AM 9 comments: 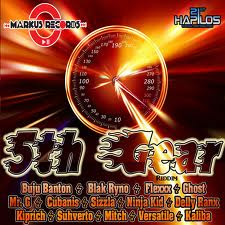 As we move from 5th to 6th edition, it's time to say goodbye to the old and ring in the new.

I greatly enjoyed 5th edition, and feel that it was the best rule set 40K has had so far.  There were some issues, but overall it was a good gaming experience for me.  This is the edition where I got out to local stores a lot more and met/played with a lot more people.  It's been the edition that the blog has pretty much been about so far.  It's been an edition with a lot of secondary releases, some of which I've managed to play, others not so much.  I've been involved with a few short Planetary Empires campaigns, played a few games of Planetstrike, but never got into any Spearhead games.

We've seen the fall of the old Inquisition with their cross-codex allies (only to see the ability apparently soon to return for most armies), much gnashing of teeth from players of certain books (though that's hardly unique to any edition), and the introduction of big flyers into regular 40K (soon to be more developed in 6th).  There have been lots of great plastic kits released, some great army re-imaginings and some flops (Finecast).

It's been a great ride, but soon we'll be moving on to 6th edition.  From the various rumors, there are some things that are concerning, but overall it sounds pretty fun.  I look forward to getting my hands on it, reading through it, oohing at all the pretty pictures and giving the rules a try.

From the recent rumors, it sounds like a lot of the ideas from the pancake/prisoner leaked rule set have made it through to the final set, though in altered form.  Reaction fire, different flyer rules vs. fast skimmers, option to bring terrain with you, etc.

If the allies rules are for standard games, I look forward to seeing those in use in most cases and using them myself.  Sounds like a good way to get some fancy daemons in with CSM armies, or make CSM/traitor guard Lost and the Damned combos (or IG/Daemon combos), or the IG armies with a unit or two of Space Marines stiffening them.  It will also be a good way for those with smaller collections of several armies to bulk up for bigger games.  I'm sure that there will be very abusive combos found in short order, but as I mostly play casually, I'm not too concerned.  For the competitive types, I don't think it will matter too much either.  If the allies are viewed as too good, I'm sure that a number of tournaments will disallow them, and even for those that allow them, everyone will have the option to take the super powerful combos (yes, you may need to get a different army/different units, but that's always been the case for the big competitors).

If the allies pan out, that may also put the last nail in for my Lost and the Damned fandex (see tabs above).  With the ability to mix and match with allies, there's a lot less need for it.  There are some unique things in it, so I may see about redoing it at some point in the future, but for a lot of LatD type forces it sounds like allies may be sufficient.

The current league I'm in is in transition as well, which we knew would happen when the new rules came out.  I'm currently pushing for us to have a "free month" where we can all just play a lot of games and learn the rules without worrying about league points or league-specific rules, and then once we get a handle on the new edition revamp any league rules that don't fit too well anymore.  We'll see!  I hope to make it out Sunday to Gaming Underground to talk about that and get a few last games of 5th edition in.

Posted by sonsoftaurus at 2:00 PM 2 comments: 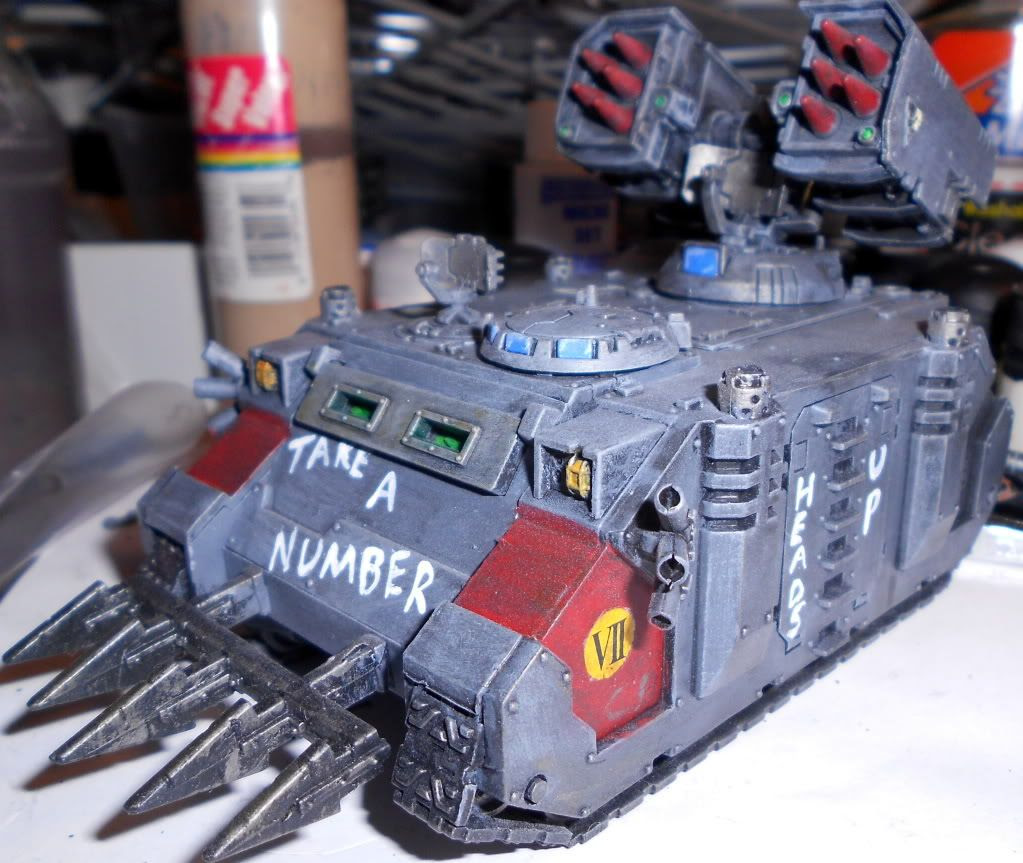 Here's the other part of my addition to my Space Sharks force for the 750pt level in the local escalation league (along with the bike captain), a Whirlwind.  Whoosh, boom.
Read more »
Posted by sonsoftaurus at 11:15 PM 7 comments:

A wraith walks into a bar... 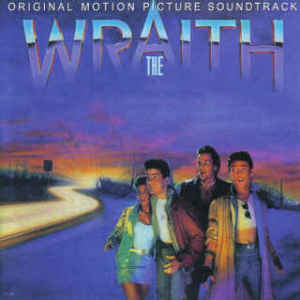 ...and goes right through it, because they ignore terrain.  Ba dum ching.  Ever since I first saw the new plastic Necron Wraiths, I knew that I had to get a box, even though I don't play Necrons.  So, if I wasn't going to use them as Necrons, could I find another use for them?  Sure...
Read more »
Posted by sonsoftaurus at 9:12 PM 7 comments: