(Part One including army lists can be found HERE)

When last we left our heroes, they were hunkered down waiting for the Tyranid Wave Assault to commence.  The commander was convinced that the enemy lictors were specifically after him, making him rather jumpy (-1 Ld from Deathleaper's special ability). 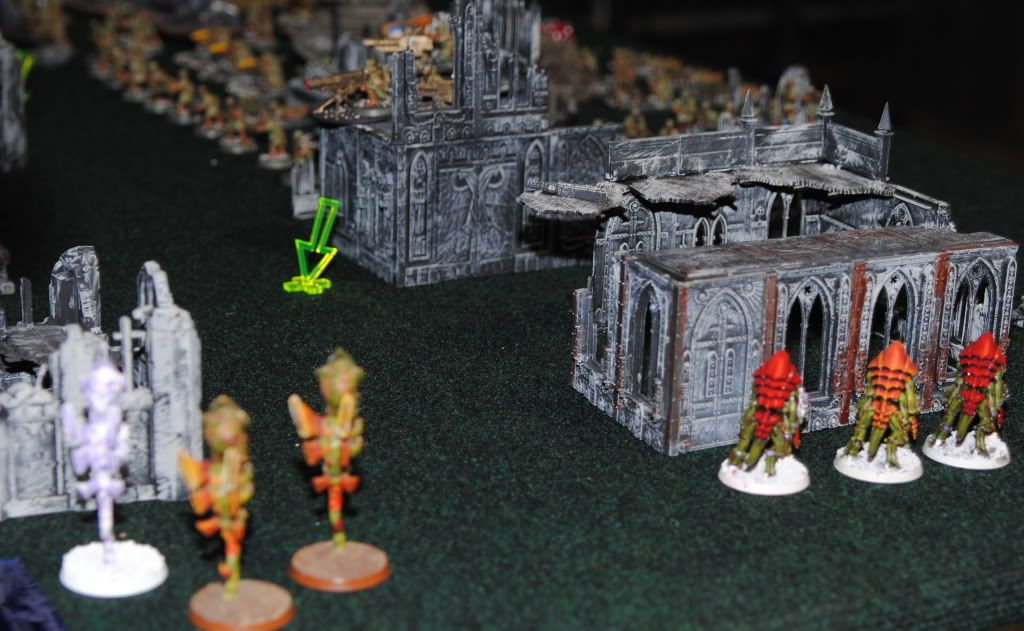 The Nid first wave arrived, coming in on my left.  Three Zoanthropes, three Hive Guard, and a Mawloc that immediately burrowed to tunnel up next turn.  The Hive Guard shots spattered off of a Leman Russ, while the Zoeys blasted a lascannon team to oblivion.  The remaining teams hold firm, an event that would be repeated many times over during the battle - the Merkans would die, they might miss order rolls, but no unit ever broke from shooting casualties.

I don't know which order Todd would have preferred to have the waves arrive in, but this wave did present some very sturdy units, minimizing the amount of damage I could really do in return early on.

Guard weapon teams light up the Zoanthropes, but warp field invulnerable saves spatter the krak missiles and lascannon shots away effortlessly.  The Master of Ordnance also calls in a strike on the Zoanthropes, but the shot goes wide...fortunately, this makes it scatter perfectly over onto the Hive Guard!  One gets killed and another wounded.


A Mawloc erupts from below, killing one missile team and a guardsman from the Company Command squad.  The Nid second wave arrives from the front, two genestealer broods and another Mawloc, that also immediately burrows.  Zoeys shoot up another lascannon team. 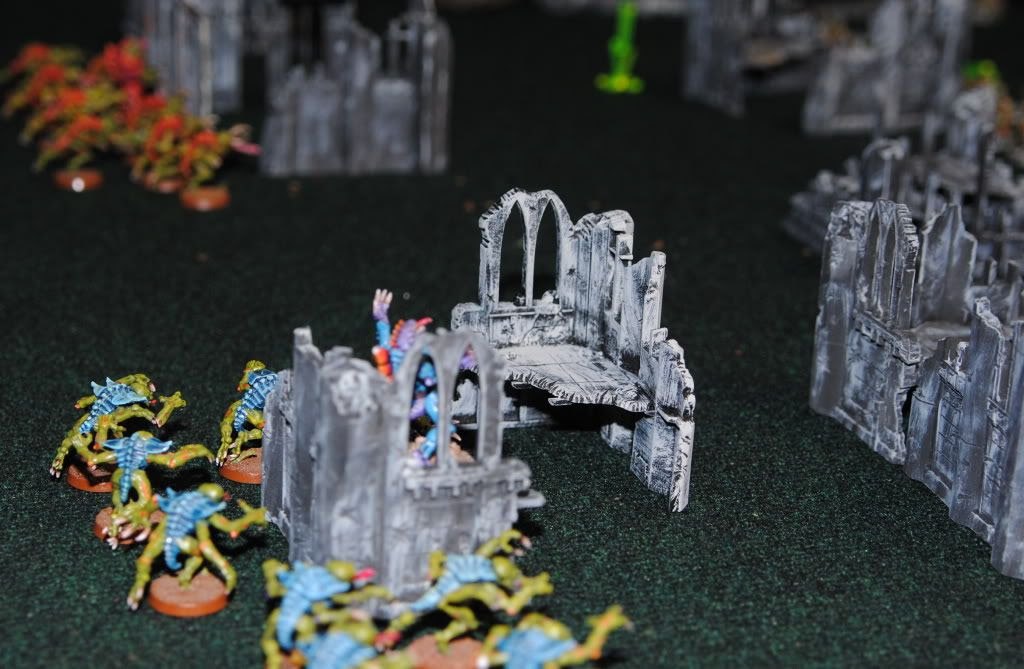 The Merkans pull towards the middle and pour fire into the Mawloc.  Some shots also head towards the zoanthropes but again bounce off the invulnerable saves.  On the left, other squads move up to shoot up Deathleaper and wound it but don't finish it off.

The second Mawloc erupts to support Deathleaper, killing seven guardsmen.  On the way up it passed through a chalk deposit, covering the carapace in a white powder. 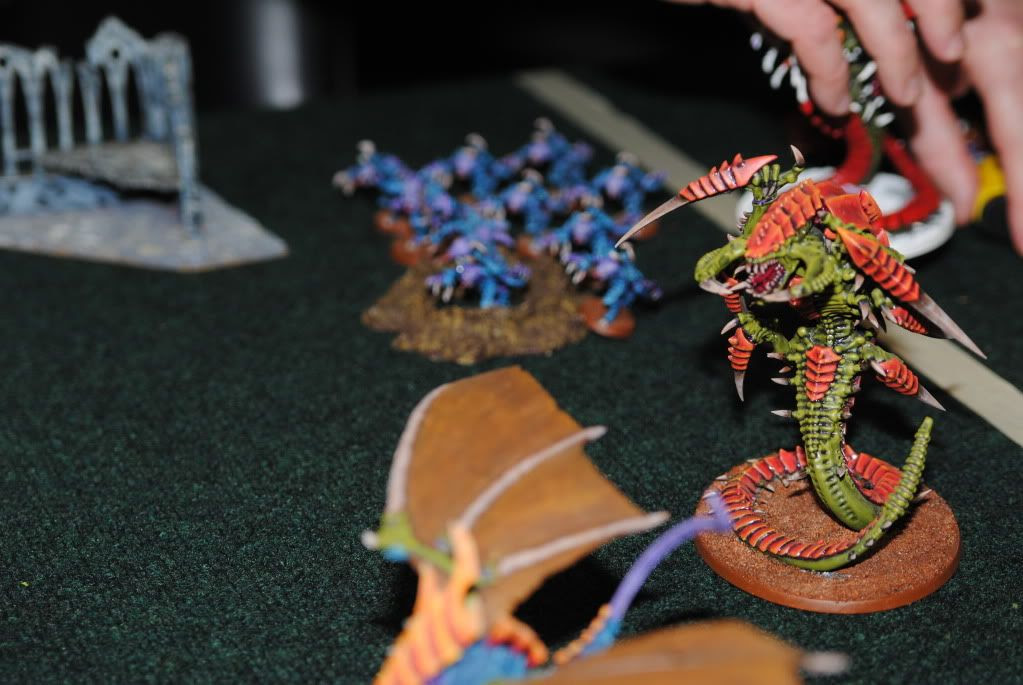 At the same time, the third wave arrives on the right - Hive Tyrant, Trygon Prime and the third genestealer squad.


Giving up on lascannons, missile launchers, battlecannons and artillery pieces to damage the Zoanthropes, the guard turn to an old standby - the bayonet!  A depleted guard squad charges the brain bugs, and manages to get a wound in.  One of their own falls as well, leaving the fight a tie and preventing the Zoeys from blasting for a turn.  The Merkans also concentrate fire on the Tyrant and blast it of the table.


On the right, Genestealers and the Trygon Prime move up, with the Trygon assaulting a squad.

All three Genestealer squads get cut down to just wounded Broodlords remaining. 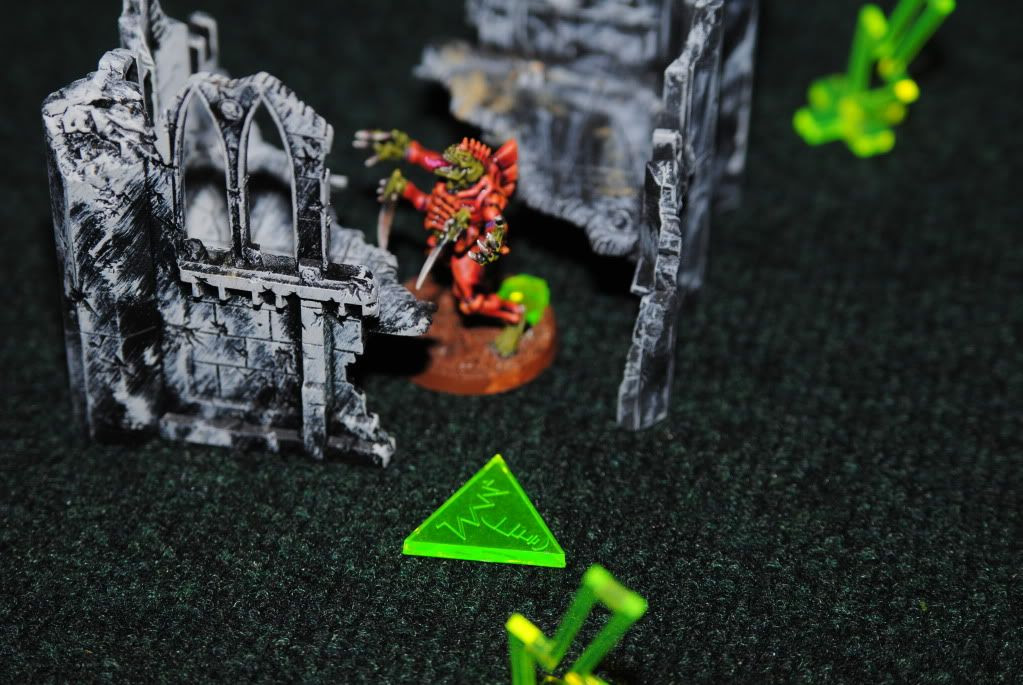 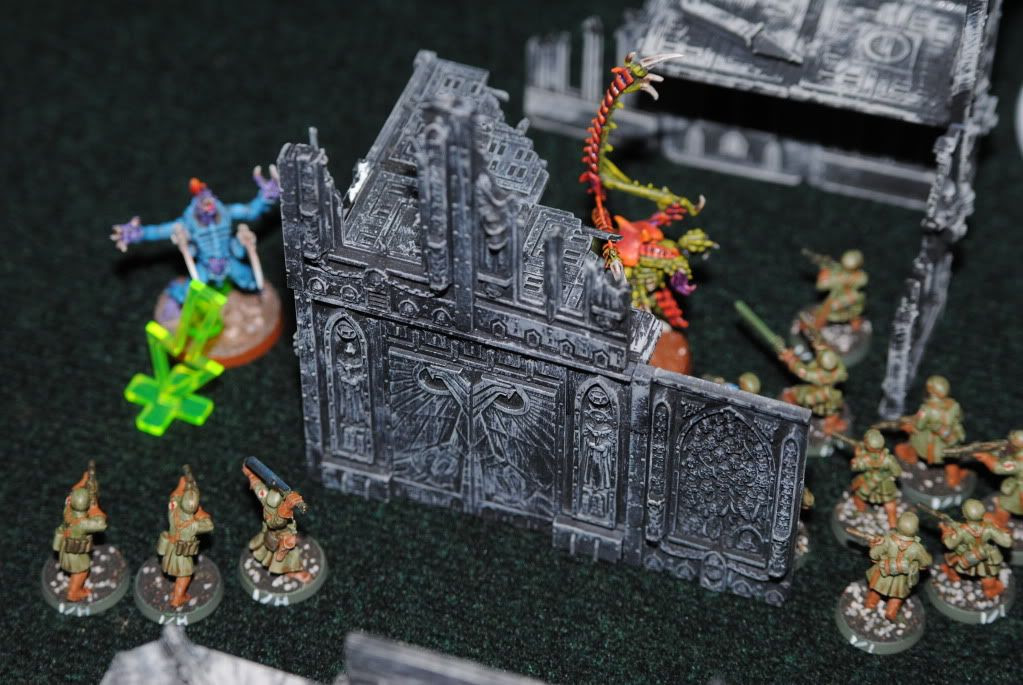 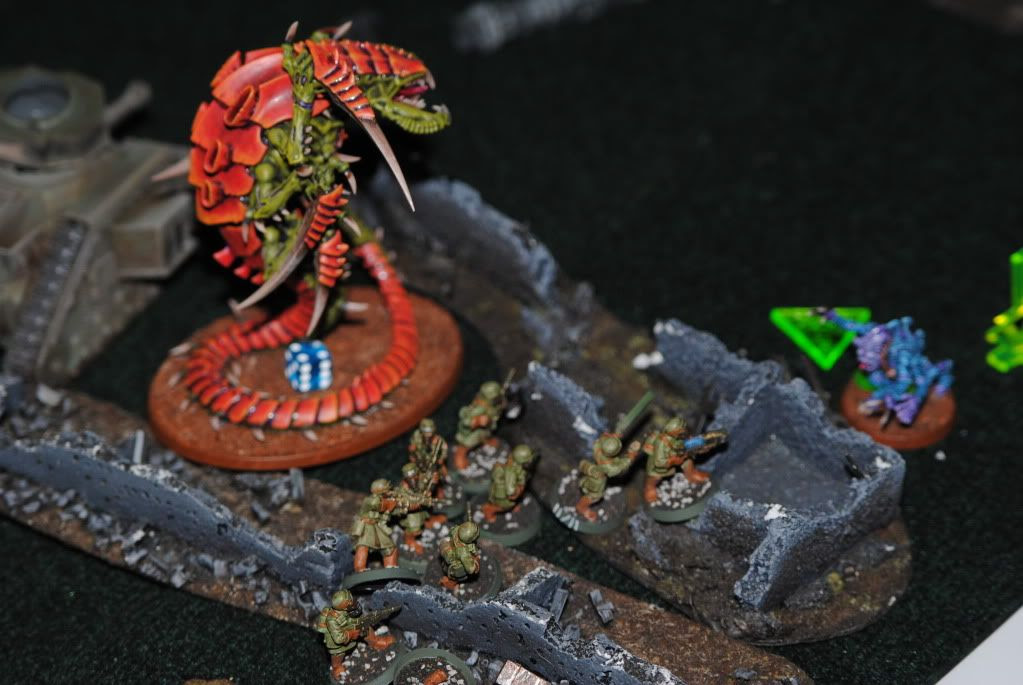 That was the state at the end of Turn Five.  We rolled to continue, and Turn Six approached.  We decided to go ahead and call it though, with the Gone-to-Ground Broodlords unlikely to survive leaving no scoring units, and the other wounded critters also faced tough prospects.  The Nids conceded; narrow decision for the Merkans.

Posted by sonsoftaurus at 7:44 AM