Sons of Taurus: Cultists and Walkers

Finished up the Sons of Taurus cultists and based the walkers. Went with browns/reds.  One, I think it looks nice, two, think it goes well with the copper of the SoT armor, and similar to the Scythiak in case I want to combine them someday as IA13 Renegades or something.

Half of the assault guys are like the guy seen here second from the left, WHFB Empire Flagellants with Pig Iron heads.  A lot of the cultists have gas masks and/or chemical injectors, thought the Pig Iron heads were a good tie-in.  I figure the masks help feed them with combat drugs as much as keep other stuff out.

I also had another league game today, against Alex and his Tau (proxied at the moment).  Way too many shots for cultists to survive, but I got the spawn and dread up into him.  He was leading 2-1 (first blood and warlord) when the game ended turn 5, if we had gone on to 6 or 7 the SoT would have won and potentially even tabled him.  Them's the breaks.

Posted by sonsoftaurus at 9:09 PM 2 comments: We've started up an escalation league to encourage new armies/new units.  I'm bringing the Sons of Taurus as that was what I was working on anyways, and it will help motivate me to keep plugging away on them.  We have a number of people nominally signed up, but have not gotten a lot of games in yet.  Hopefully that will change as more stuff gets assembled.

At least in theory we have:

We get points for battles, playing new people, batreps if you don't win, getting units finished, donating terrain.

My first outing, against the forces of Krieg (with temporary stand-ins):

I've got a dreadnought, 5 minotaurs (spawn), 20 assault cultists and 20 shooting cultists.  Scott's Krieg had a regular Russ and a Punisher (20 shots) and a two-squad platoon with platoon HQ.  We battled over the Relic. Shooting cultists move up along with dread, minotaurs rush forward, assault cultists hunker down under mortar fire (pinned due to a Warlord trait).  Krieg opens up on the minotaurs and kills one. Minotaurs charge and wreck the tanks, then move on to the infantry.  One Krieg squad makes it to the center to contest the Relic but gets beaten down.  Victory Chaos!  Screen those tanks! 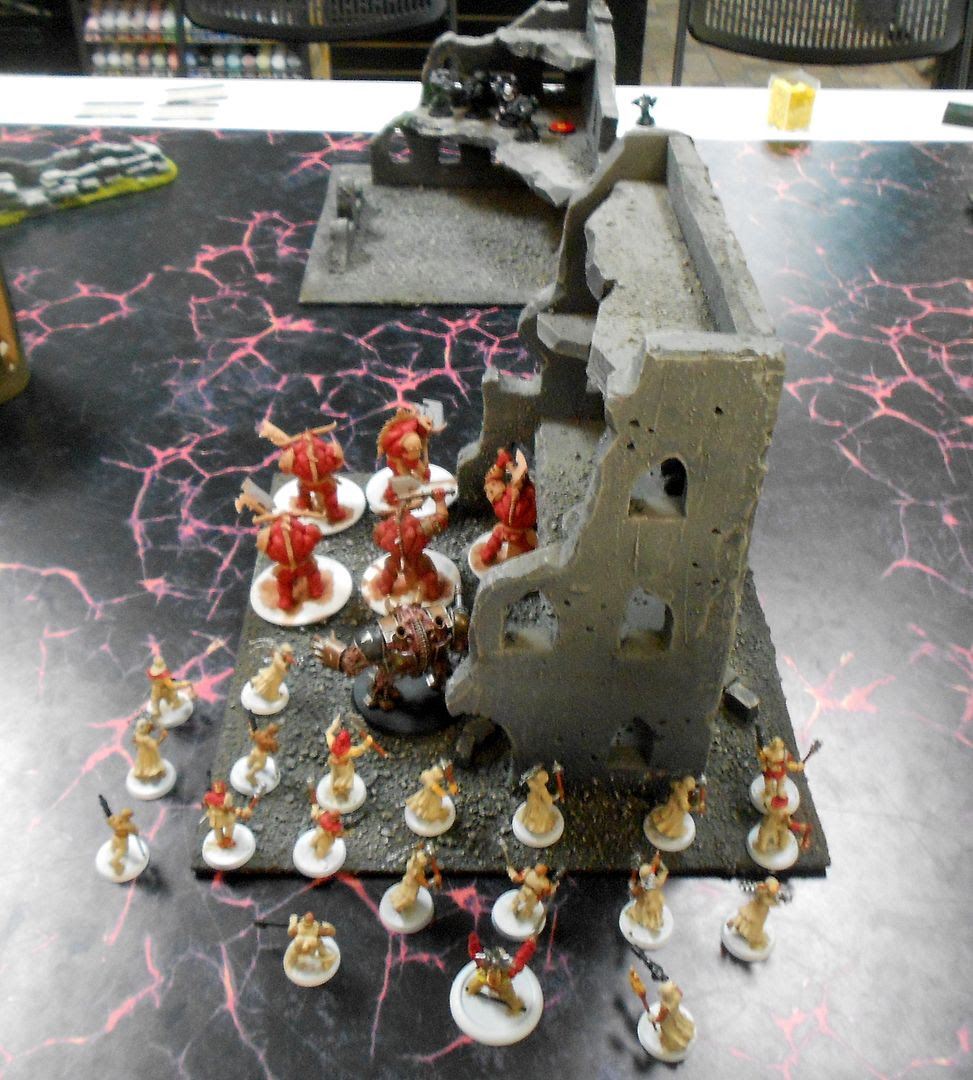 Bulk of the army pushes up the middle to head towards the devastators in the ruins ahead.  Shooty cultists on the flanks to grab objectives.  (Maelstrom mission). 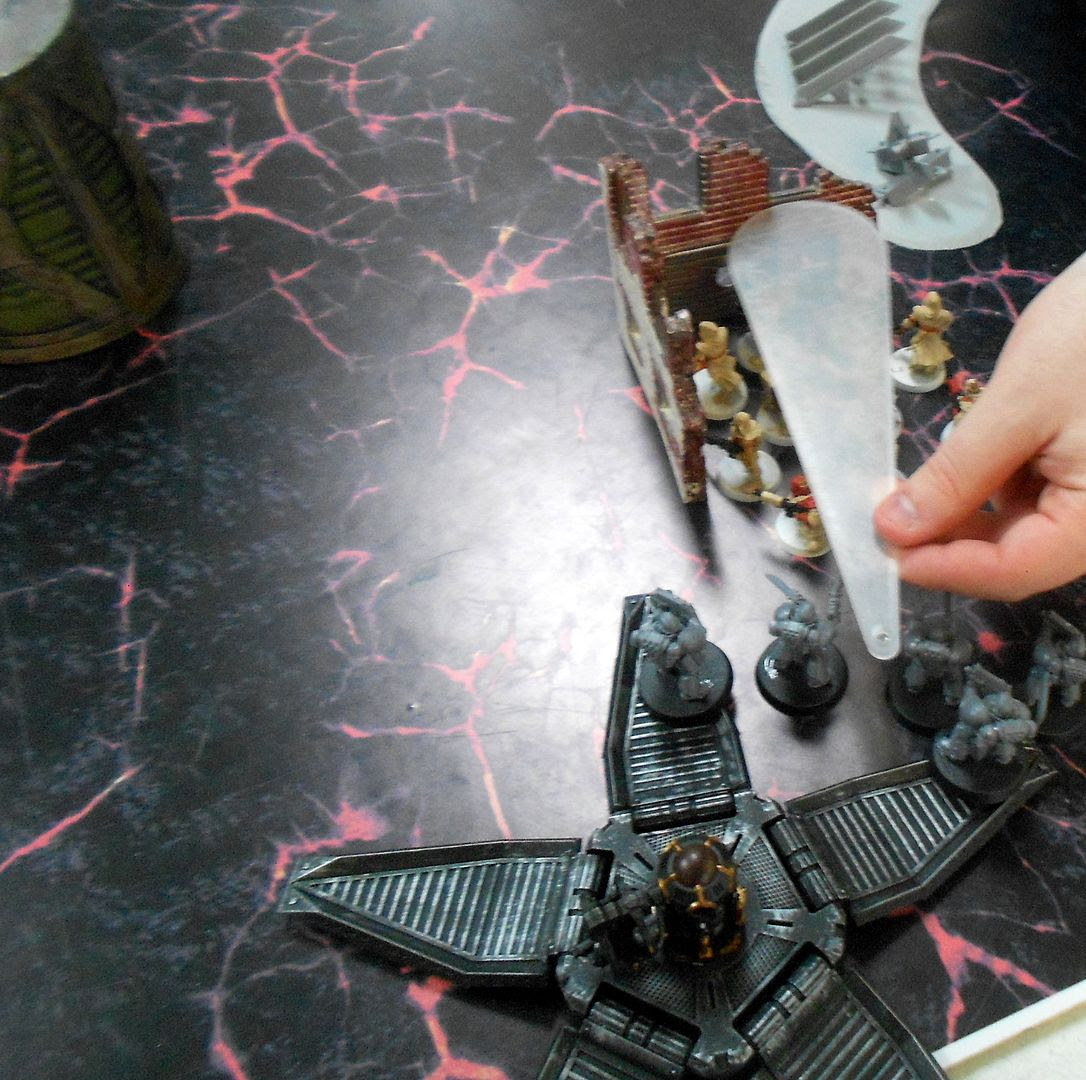 Pod drops down and wipes out cultists. 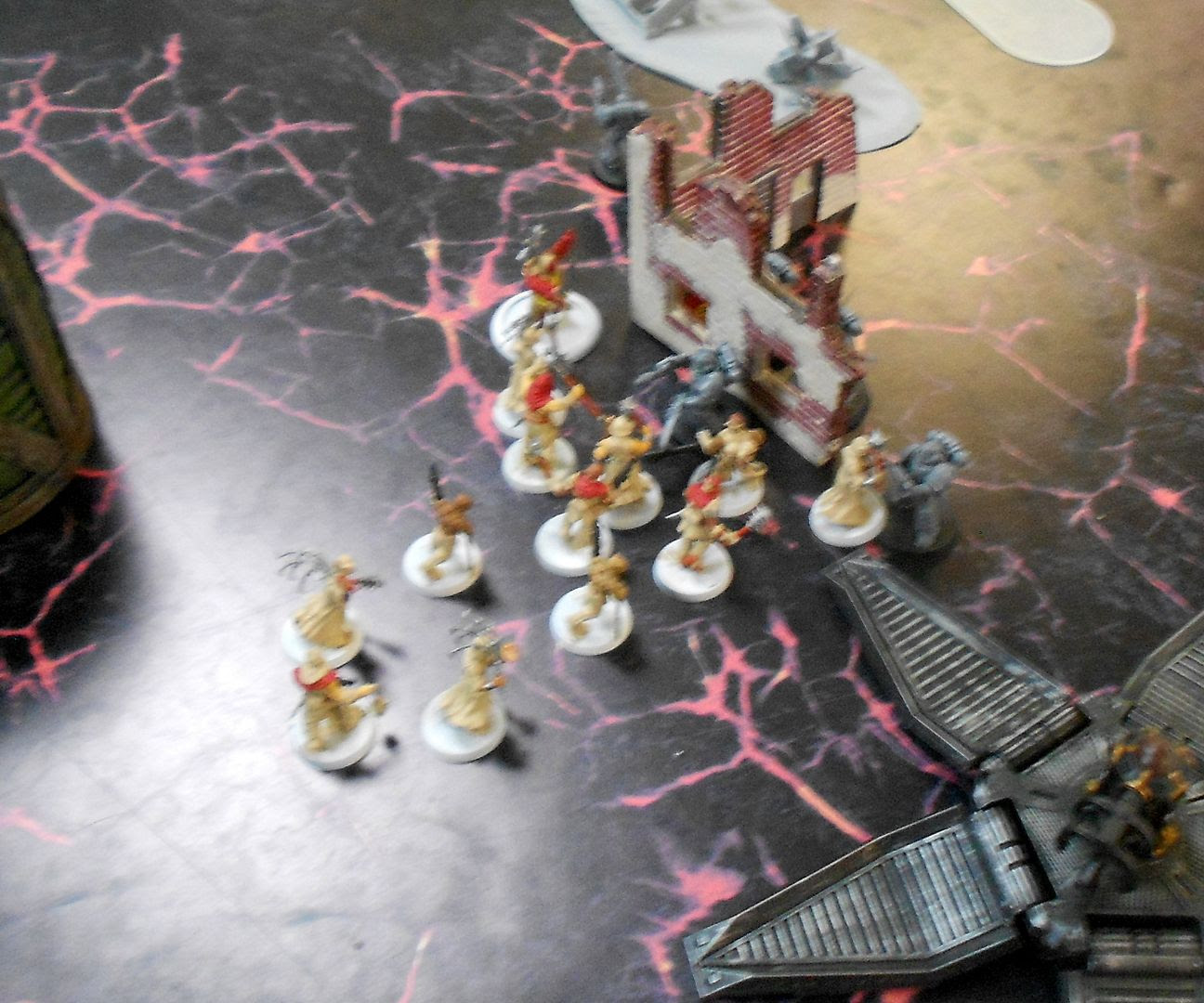 While minotaurs run down the devastators, cultists redirect to deal with the pod-squad.  They make it in a bit diminished, but gradually beat the marines down.  The cultist champion even won his challenge with the sergeant, earning +1 initiative.

Second pod squad drops down and destroys dreadnought, but are close enough for the minotaurs to charge in for revenge.  I had scored more points from the cards, and won the game.  Spawn are nasty at 500pts until you get them whittled down a bit.

I've since gotten the cultists painted, but will wait to post updated pics until they're based and more or less finished.
Posted by sonsoftaurus at 7:53 AM 2 comments: