Bash from the Past: Armored Breakthrough Chaos vs. Krieg

Had a game the other day with Shaun, who's playing a Krieg IG army in our campaign. His army was built for Apocalypse games, so his list is a bit unusual for regular 40K games - it's built to kill BIG STUFF, like Titans. Since he had a bunch of tanks, we made up a scenario that would hopefully be appropriate.

Imperial recon has detected a weak spot in the Traitor lines. Kampfgruppe Lehr was assigned to spearhead an attack on the area, breaking through and leading the way for follow-up forces. As they smash through the defenders, a force of Chaos Marines attempts to stem the tide.

Chaos – 1750pts. One Infantry Platoon chosen from Codex: Imperial Guard to represent the renegade PDF forces holding the section of line, the remainder of the force as Chaos Space Marines. The PDF forces set up second on the table up to 12” in from the Chaos board edge. All CSM forces are in Reserves.

The battle lasts for six turns.

Sections of obstacles and wire are destroyed if an Ordnance attack lands with the center hole over the base of the terrain piece. A vehicle with a dozer blade that moves through wire will clear it as well.

The Attackers:
(Given that the force was built to destroy 40K's behemoths, the tanks have names taken from the book Moby Dick and/or Mastadon songs - concept album begets concept army I guess!) 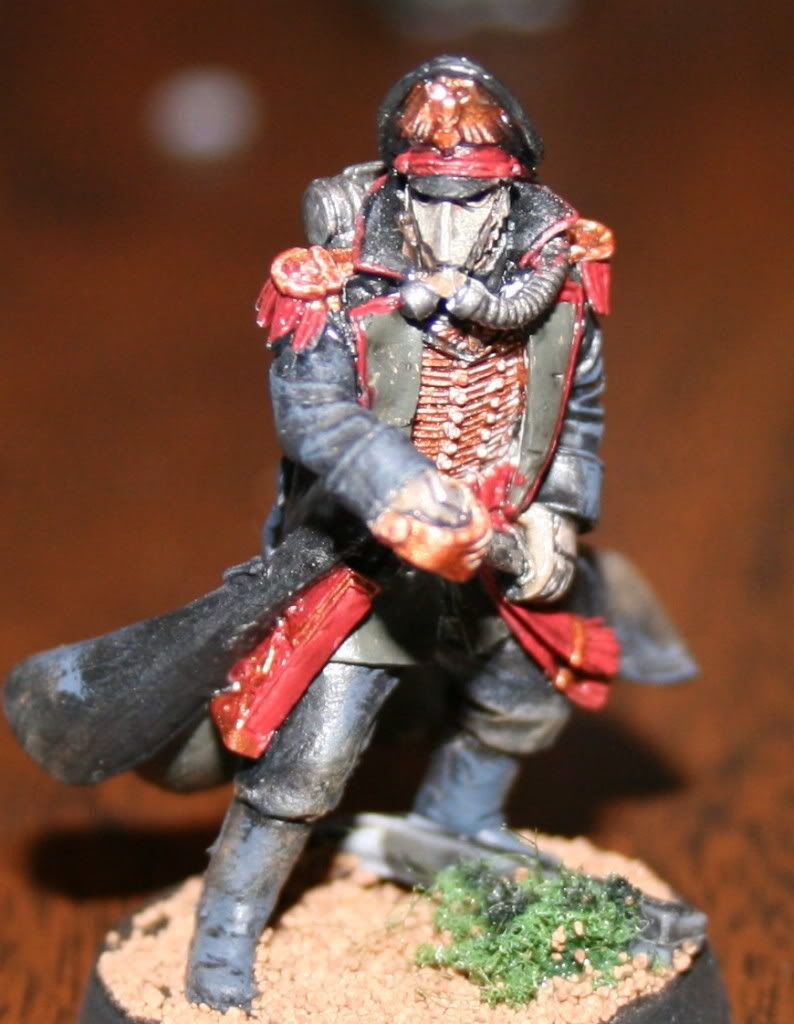 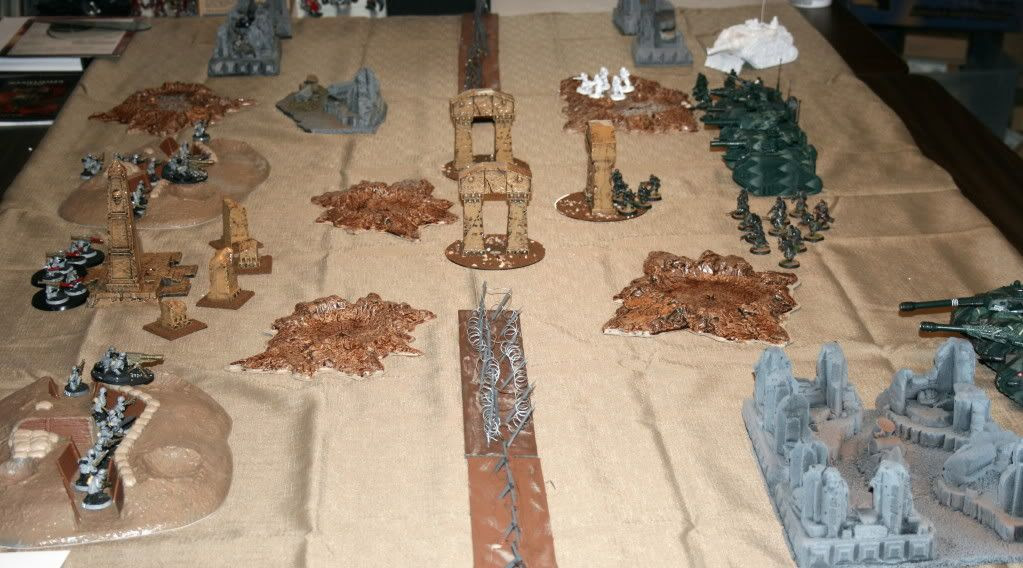 View from the Traitor center: 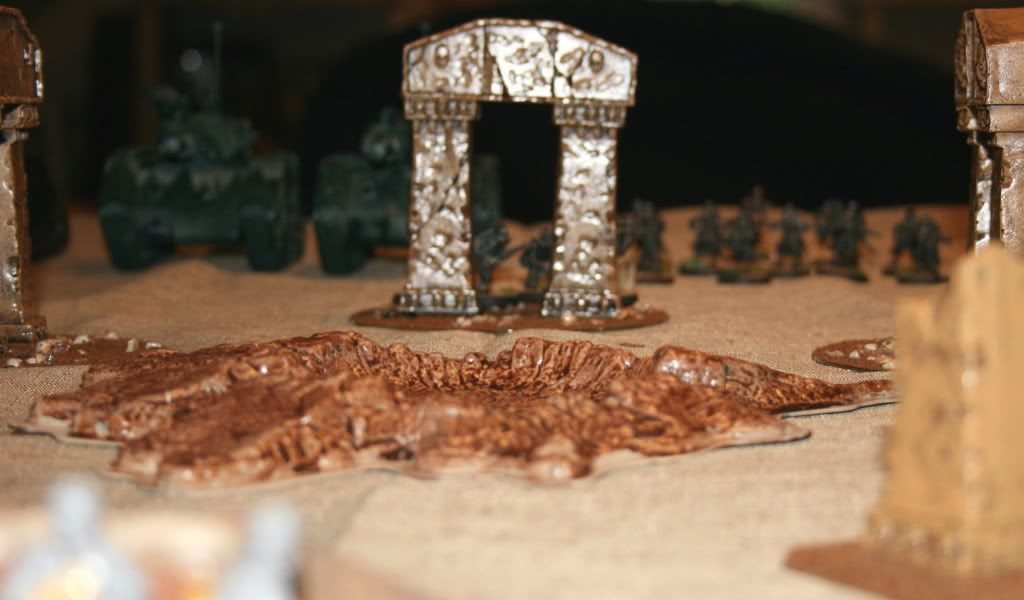 and a little to the left: 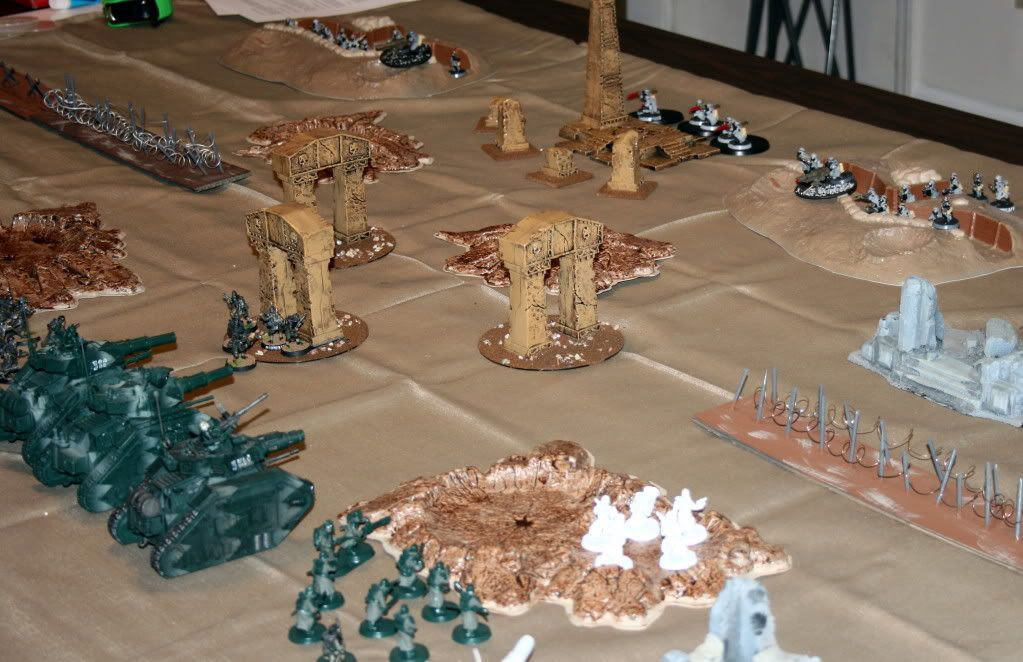 Forward! Krieg infantry forges ahead in front to protect the tanks. 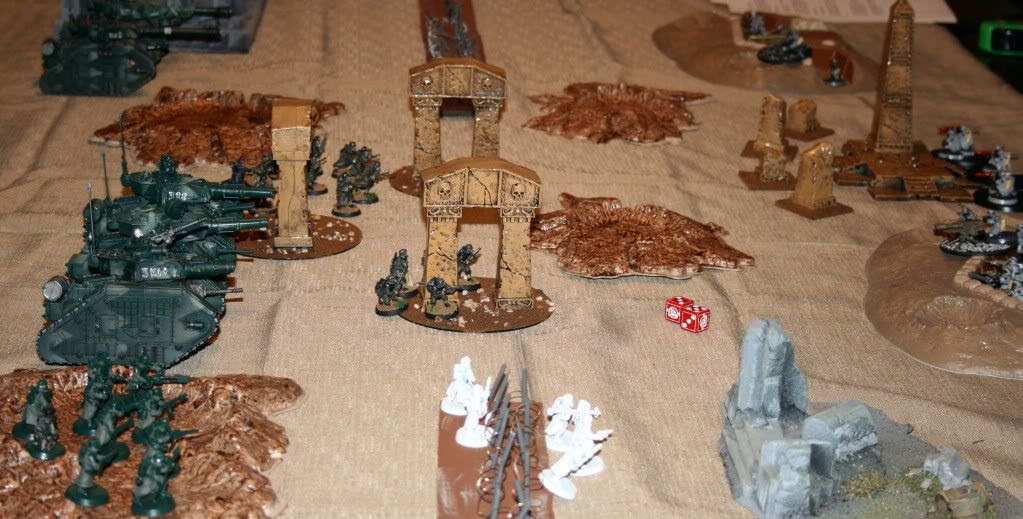 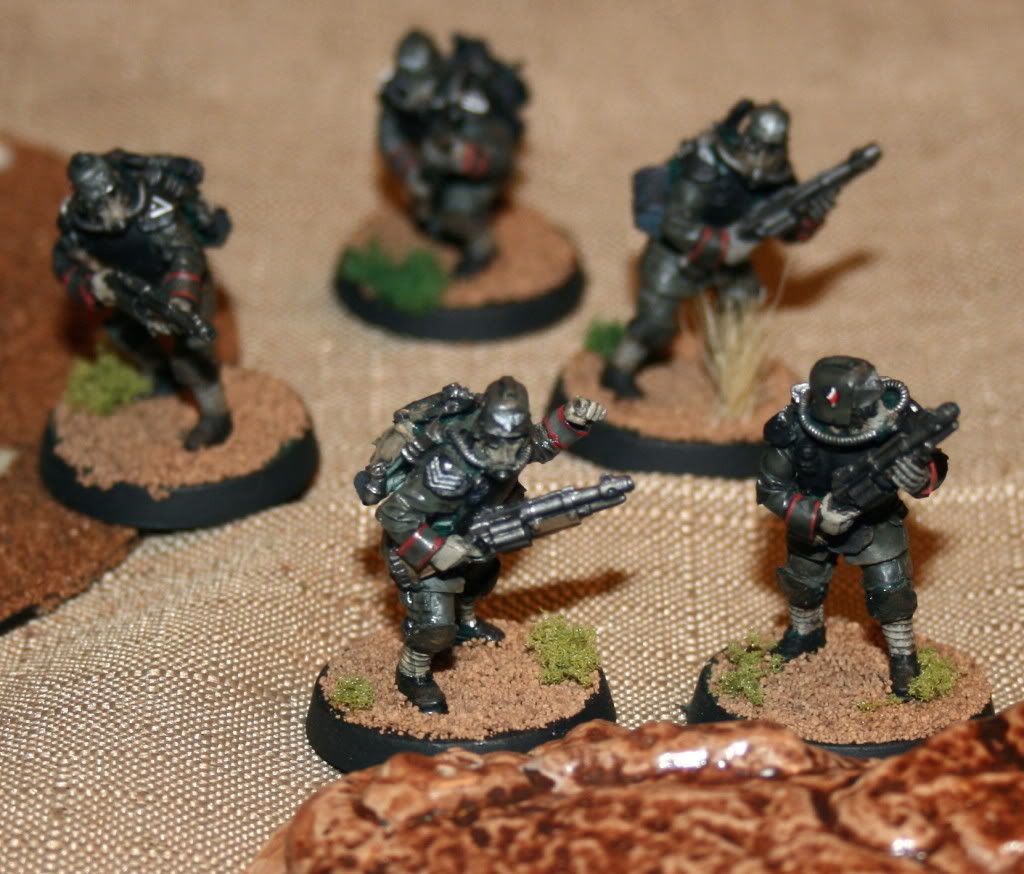 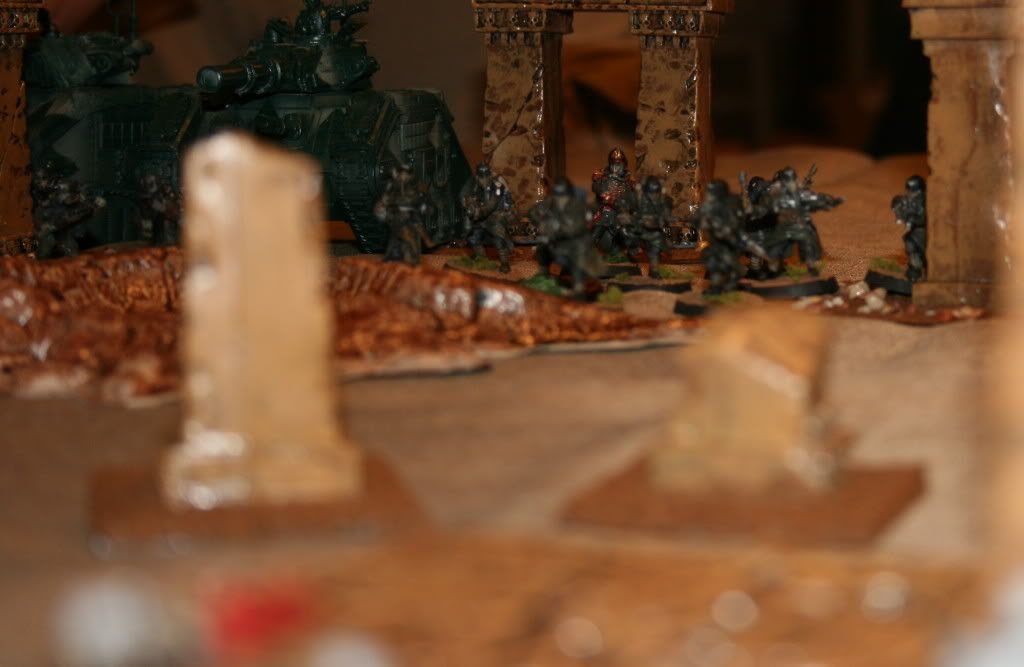 The Krieg tanks start blasting at the defenders, but 3+ cover saves a good many of them. Poor luck on Shaun's part saved even more. A lot of the one-shot weapons had trouble hitting, and when they did often had trouble wounding. I don't think the Tank Destroyer managed to kill anyone all game. When he hit, he rolled ones to wound. On the plus side for the IG, for the early part of the game the most I was able to do to any of his tanks was a shaken result or two.

Traitors hang on in the trenches. 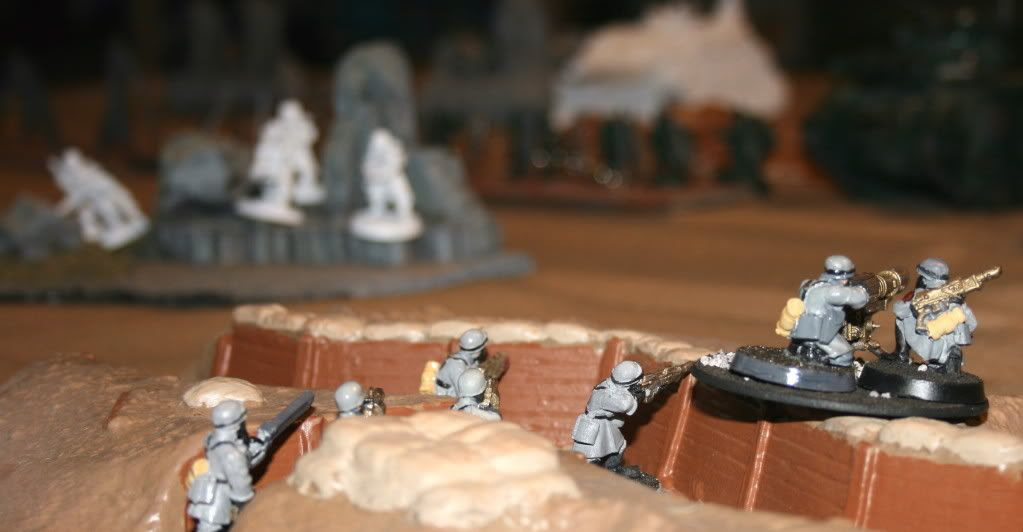 Chaos Turn 2 - start rolling for Reserves! Time to get some BS4 firepower on the table!

Or not. Out of 8 reserve rolls, managed to get one, the Defiler, to show up. Guess he Fleeted ahead.

He tries to fleet and assault the winter-camo stormtroopers, but falls short. 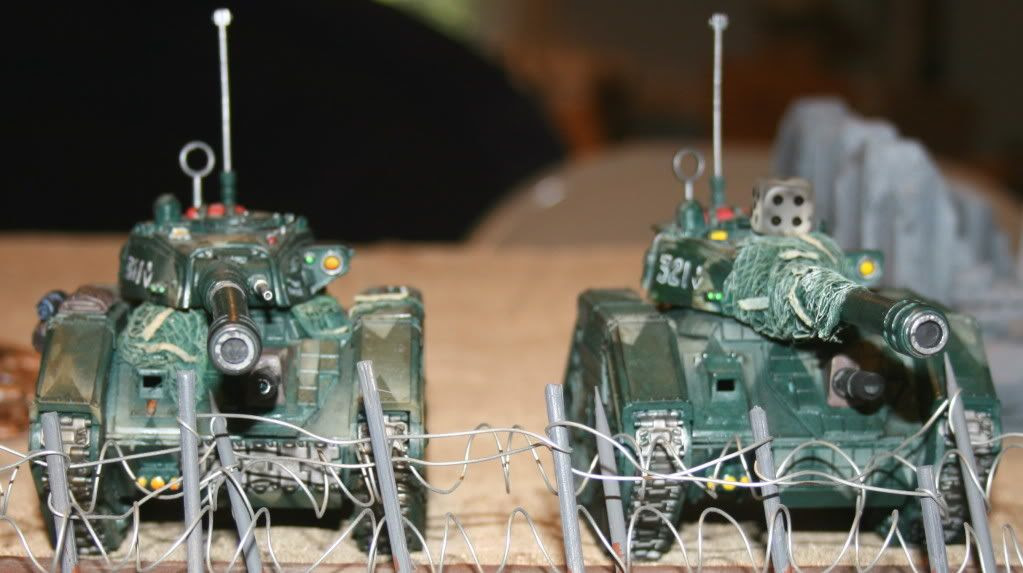 Get that Defilerschreck into position! 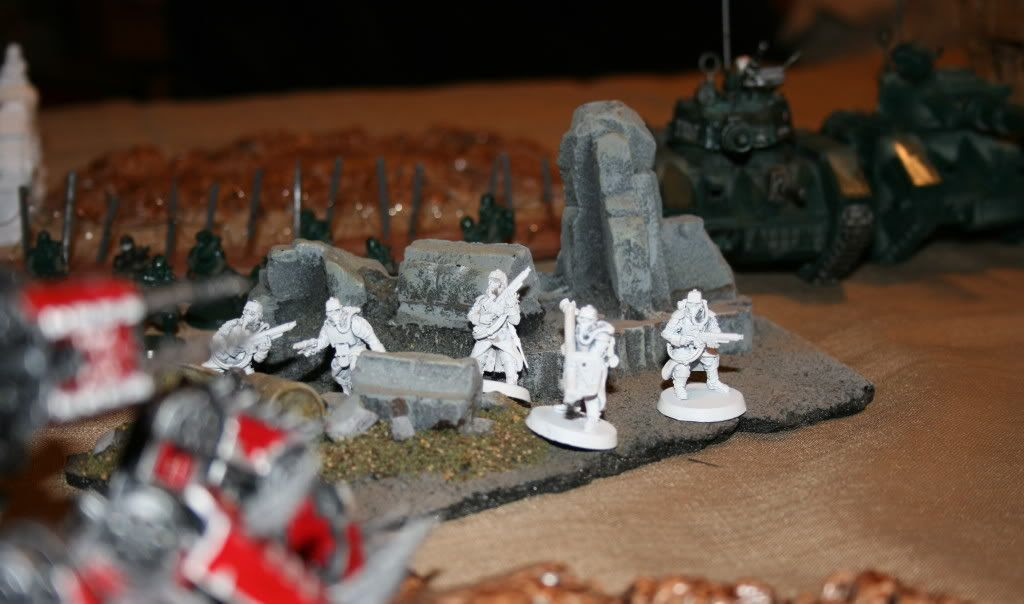 IG continue to advance in the middle

The center squad and ML squad are both run off by battlecannon and heavy bolter fire, leaving a depleted platoon command squad to try to hold the center. 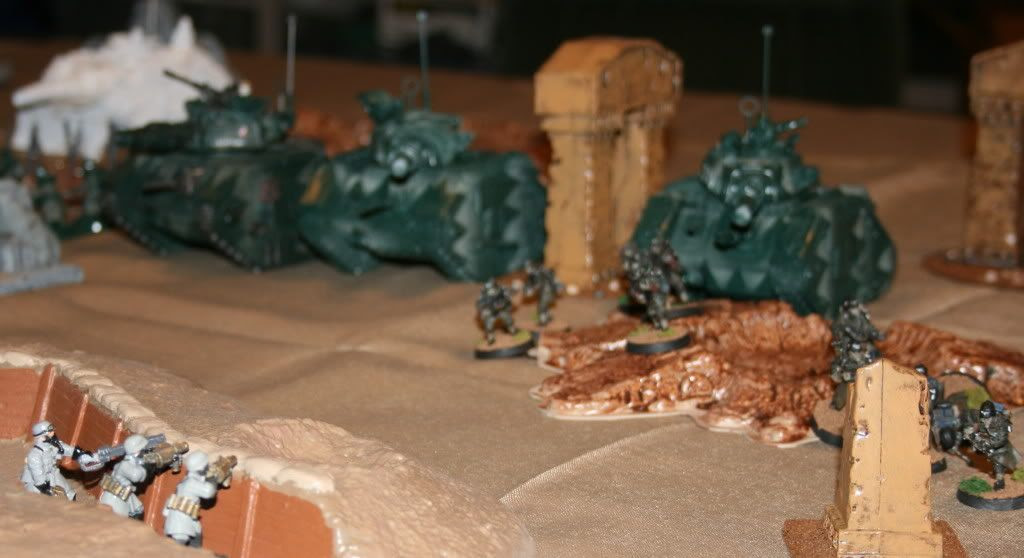 The 'panzershreck' aka meltagun and Destroyer both fail to take it out, but a Demolisher shell lands solidly on target, eliminating the CSM vanguard Defiler.

Now most of the Chaos reserves show up, ready to slam headlong into the approaching Krieg assault 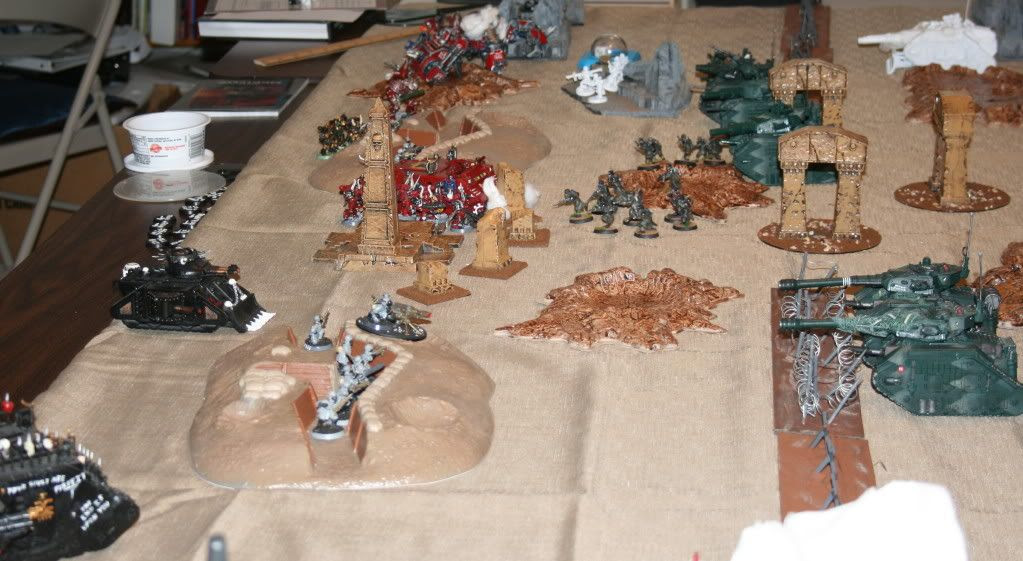 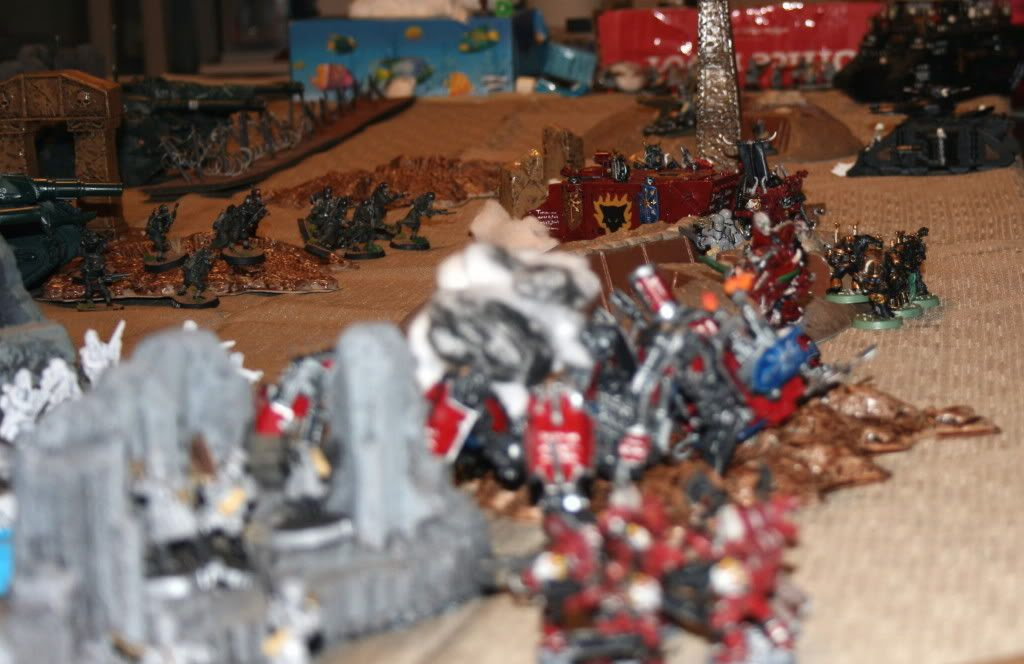 Finally, a tank is taken out, the Iron Tusk. 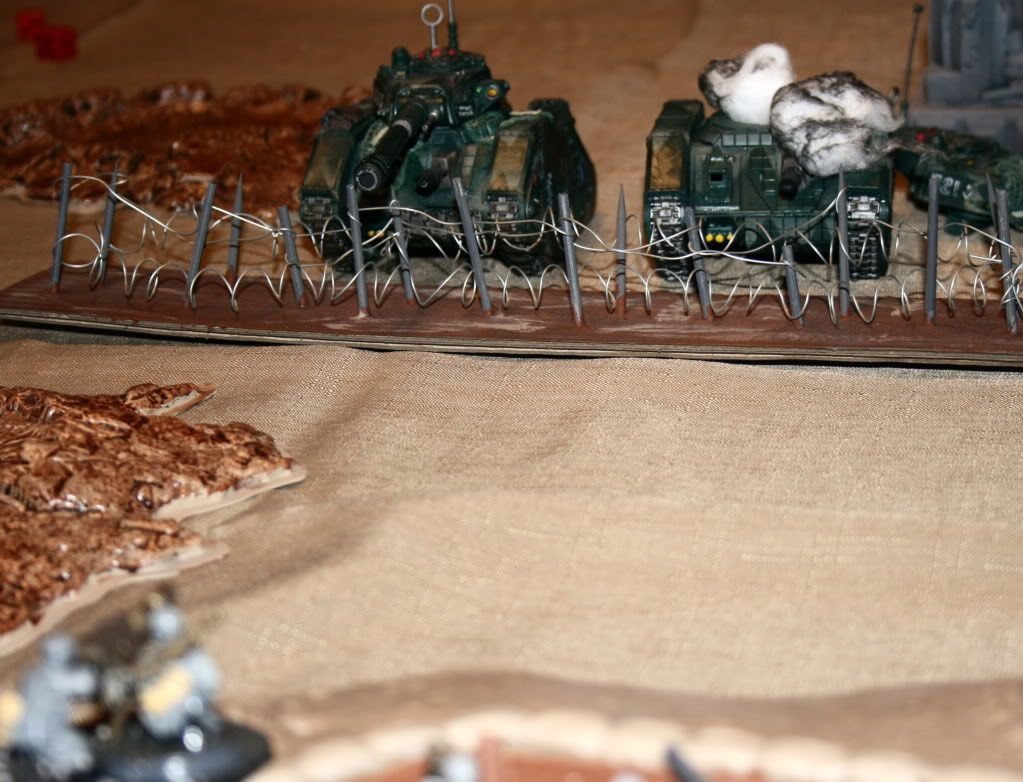 CSM move into the center trench as the tanks are almost upon them, and the Krieg infantry make some desperate assaults to try to occupy the CSM. 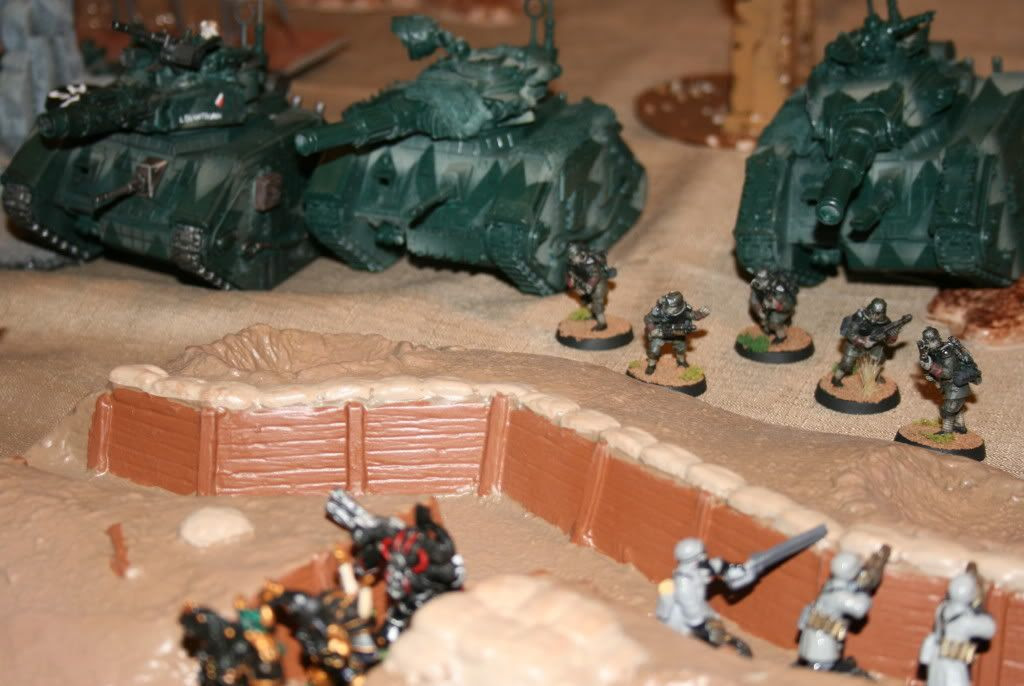 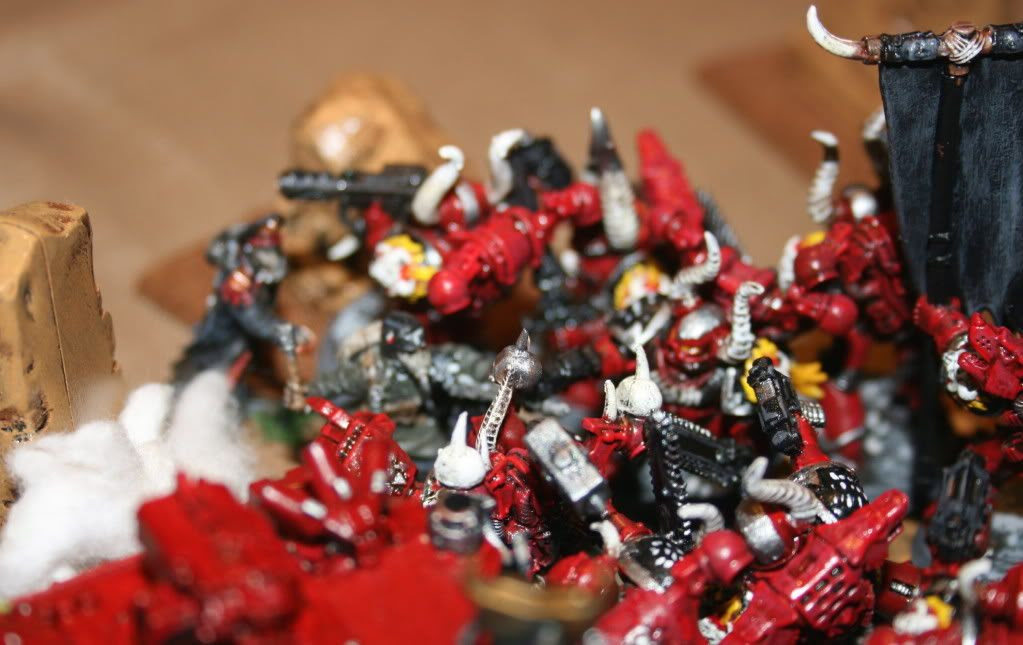 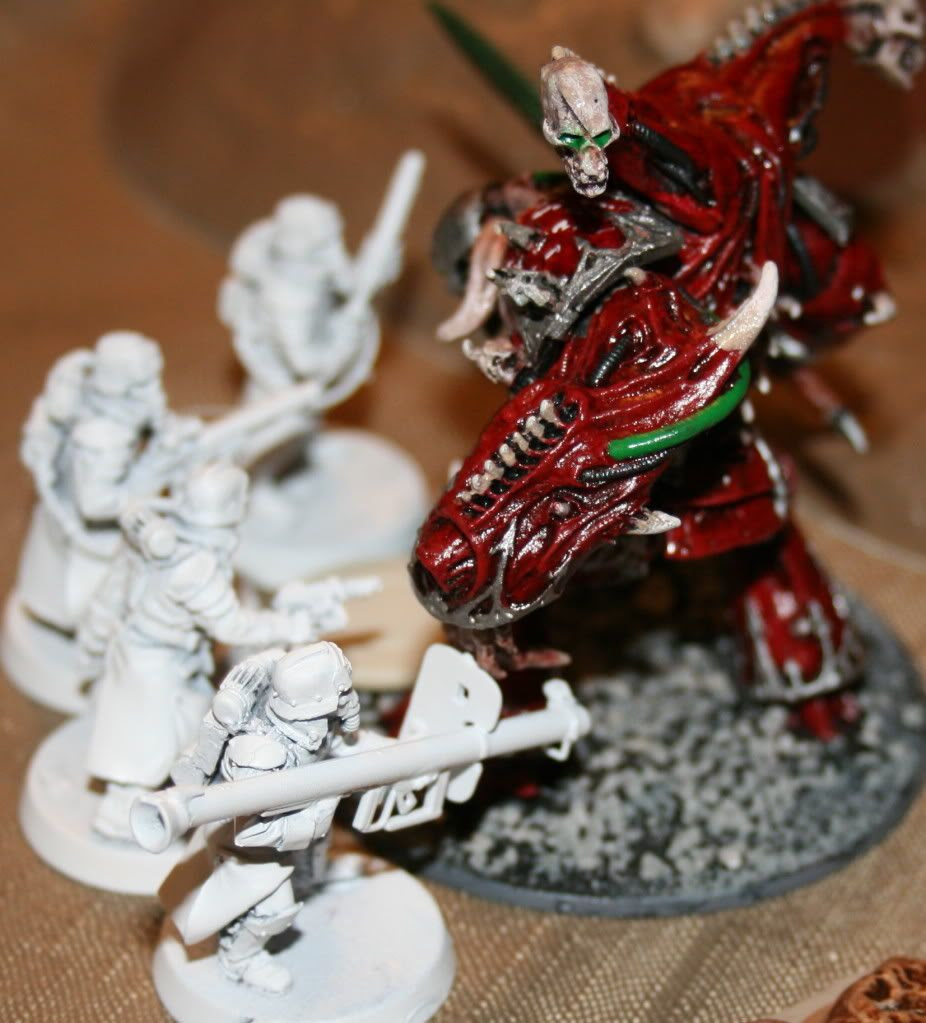 and contrasted with an example of a group of 3+ cover saves for me: 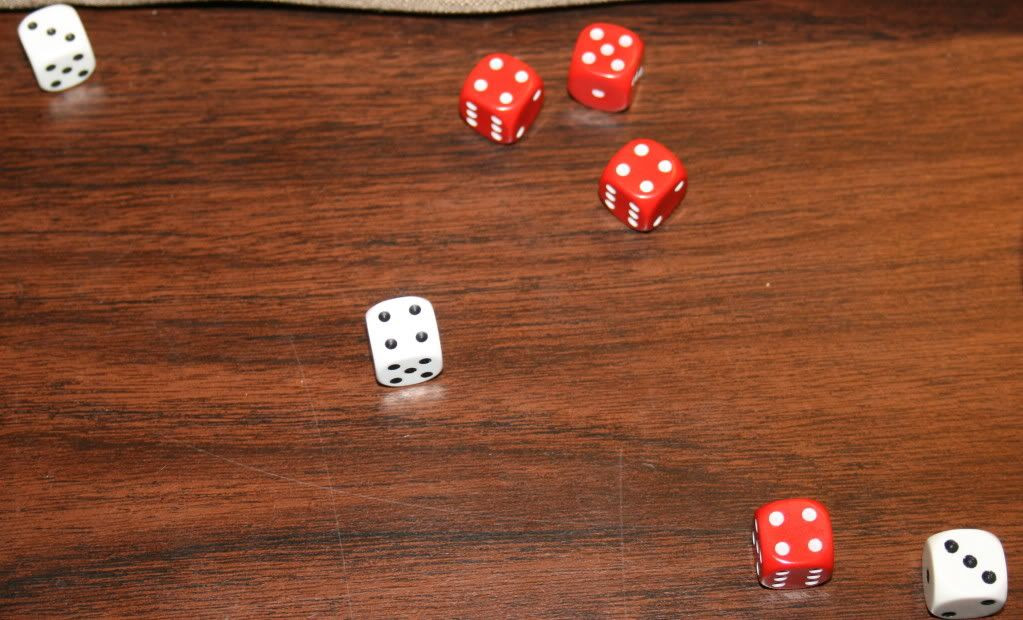 The Daemon Prince sees of his attackers though they do manage to wound him, and a CSM squad takes out a Russ with Krak grenades. In the distance you can see the turret blown off of Pask's destroyed tank too, victim of the Land Raider. 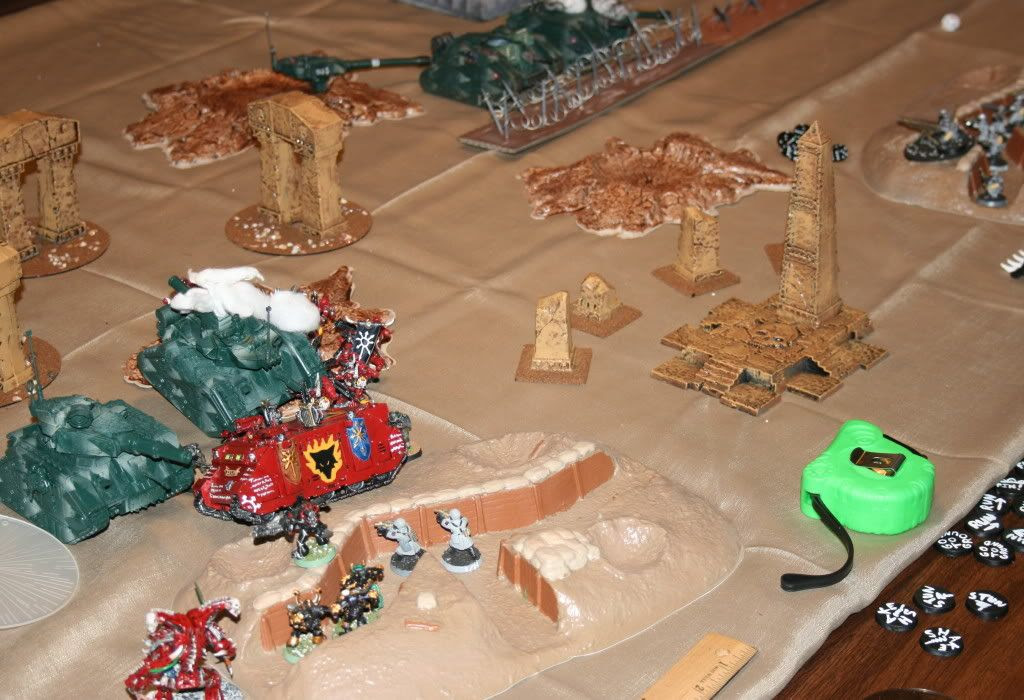 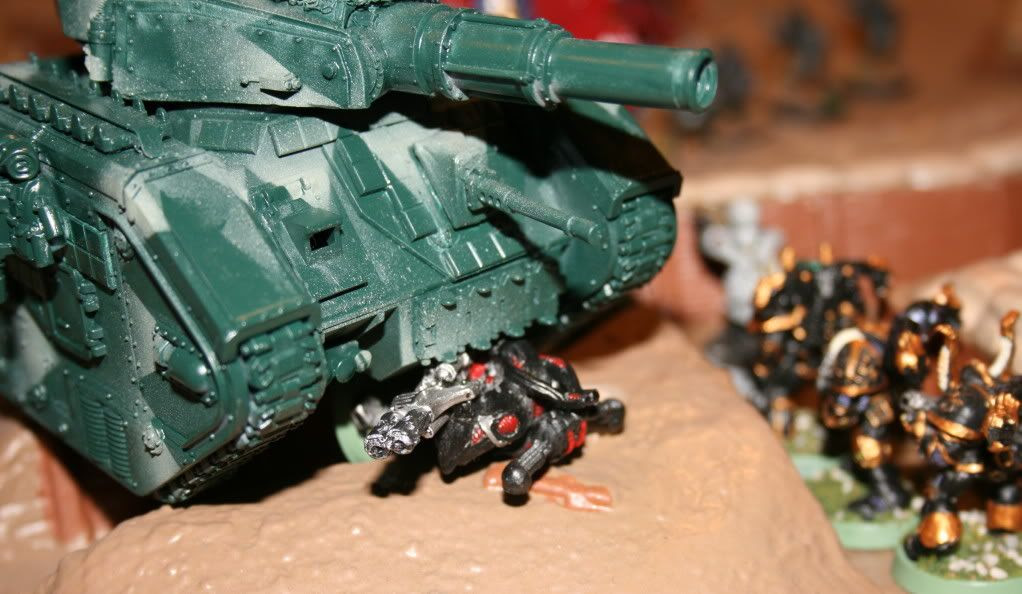 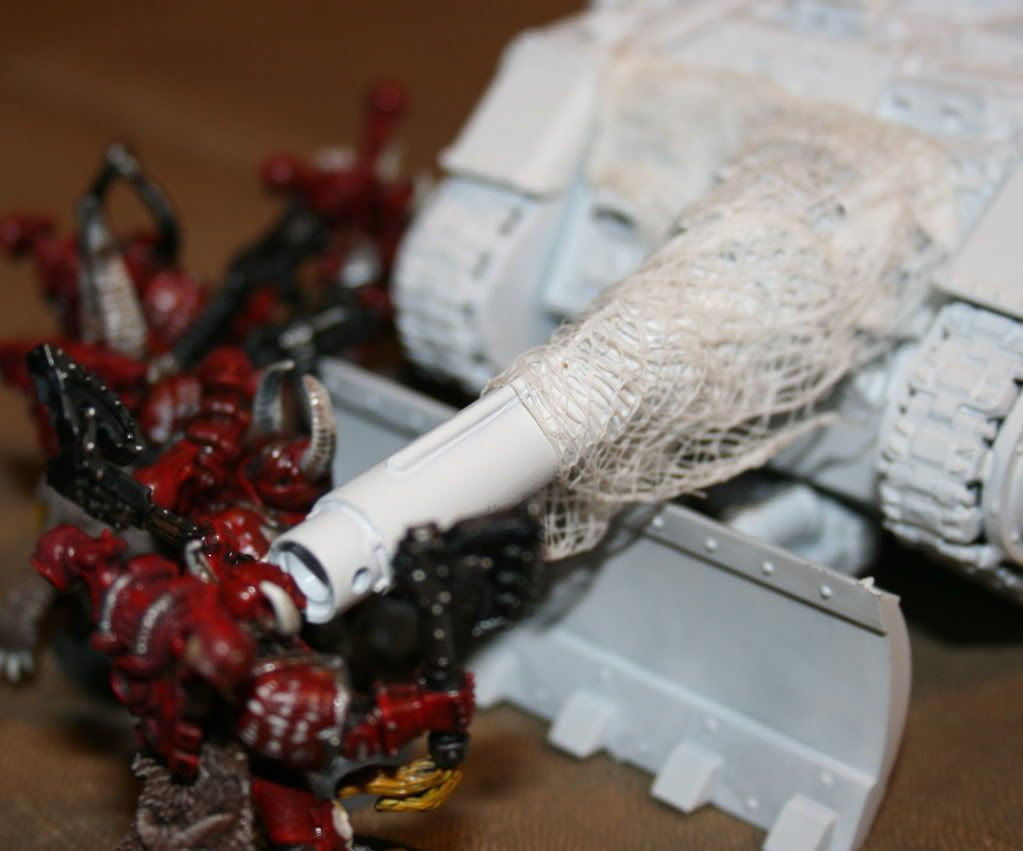 Once the CSM got into meltagun and grenade assault range, it was all over for the Krieg tanks. The Imperial assault ground to a halt. Win for Chaos.


When we worked up the scenario, thought it would be pretty balanced, didn't expect such a one-sided result. Couple of factors I think contributed:
*Poor dice on Shaun's part with a lot of his big AT guns.
*Good dice for saves on my part.

Not much the scenario can do about those.

*The Destroyer and Vanquishers aren't really built to sweep aside infantry. A lot of points also spent on things that wouldn't help in this scenario like the camo nets. An Eradicator or Hellhound in place of the camo nets and Pask would have made short work of a lot of the PDF traitors. Feel free to borrow one from me if we do this one again Shaun!

*The Chaos reserves (defiler aside) were pretty nasty. Coming on anywhere along the back line, the long-range stuff often had side shots, and they were able to move on and take shots pretty much right away. If the IG had a turn to shoot at them before they could open up, might have made a difference. Maybe add a rule like: Assess the Situation: Chaos vehicles moving on from Reserve count as having moved Cruising Speed for shooting purposes, even if they actually moved less. This represents them having to take a few moments to assess the battlefield and isolate the enemy targets amid the confusion. All Chaos units moving onto the table may not assault on the turn they enter.

*Even points for this type of scenario may not be warranted. Maybe give the defenders 2/3 of the attacker's points instead of parity.

*Some more cover in the middle area that could provide cover for tanks could be a good idea, especially from side angles.

Thanks for reading, hope you enjoyed it!