I still have one paper to revise and finish for the semester, but took today off to head over to Heroes Headquarters to get a couple of games in.  I had hoped more folks would be there and I could play some other folks, but ended up playing John's Blood Angels and Hugh's Grey Knights again.

Which is fine; they're both great guys, I enjoy playing them both and I like fighting Imperials with my Scythiak, but I hope to be able to branch out more in the future.

This is our 750pt round, and I brought in six Ogryn to beef up my horde of grunts.  They did well in both games.  Both games ended up as three-objective Seize Ground, vs. BA in Spearhead deployment, vs. GK in Pitched Battle.

The forces of Chaos were at work on the dice; both of my opponents had some bad luck at bad times, helping the Scythiak to secure victory in both battles.  John continues his tradition of Perils-ing his Librarian, and Hugh blew five out of five power armor saves for one of his GK squads very early in the game, plus his teleporting squad waited until turn five to show up, then scattered too far away to make the potential game-changing difference.  I had a good time, I think they both did too despite the outcomes. Next round is 1000pts, not exactly sure what I'm going to upgrade to as of yet.  Paper first!

The Ogryn were solid, and pretty scary at this level.  Both opponents had force weapons, but were unable to really get them in to make the difference. While they're an investment, the more I use them the more I think they're probably not as overcosted as most people think - if you have enough other stuff in your list to cover your other requirements.  They're not as efficient as Chimera-borne vets or Vendettas, but they're not shabby.

First, look at them as short-ranged shooting units rather than assault.  Their gun is 3 shots at strength 5, which is similar to a heavy bolter.  A heavy bolter squad will run you 75pts for three, so 25pts each.  Now make them Relentless (the ripper gun is Assault), drop the AP and drop its range to 12".  Probably a fair trade.  Bump them to toughness 5 and remove most of their instant death worries, probably +5pts each.  Extra wound, again probably another +5 each.  Now make them Stubborn, give them an extra attack, furious charge, WS 4 and Strength 5.  Worth 40pts?  Probably.  Now, this is assuming you think Heavy Bolters are worth 25 each, which is another issue!

Edit: I should probably also link to my Ogryn: Not Terrible post here too!

Posted by sonsoftaurus at 6:31 PM 3 comments:

40K Tournament Etiquette: Anti-Meta Tactics and Why I Don't Like Them 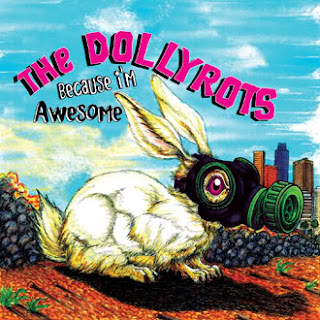 As most of you who have read my posts before know, I travel around the galaxy for Warhammer 40k tournaments, which as we all know is serious business!

I have recently noticed a new meta creeping up and I do not appreciate it at all.  I believe the tactic that I am about to describe is used to intentionally deceive experienced players caught in the cycle of alleged optimization.

With some of the money from selling my Tau army, aside from grabbing the things I need to make the Space Sharks later this year I also picked up a bit of terrain. 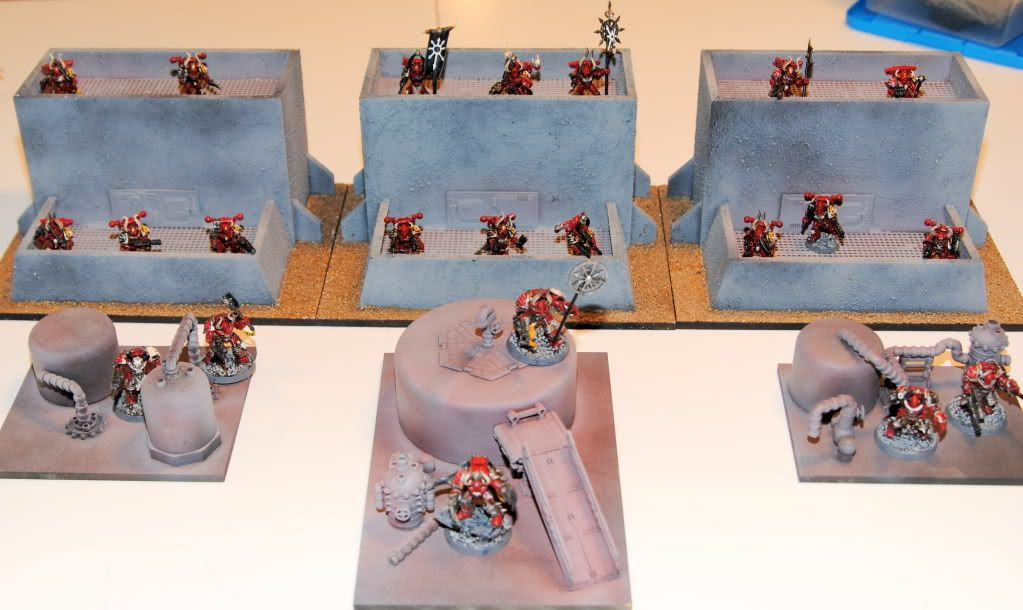 I've been thinking of throwing together an entry (with hopefully better pics) for the Conquering Elite contest GW is running at their site.  I'm under no illusions that I'll win anything, but it sounds like a fun lark.


But which Elite to choose? 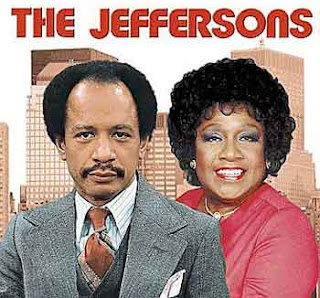 Just a quick post listing what I'll be taking for the next stage of our 40K Escalation League.  We're moving up from 500pts to 750pts.  Still no HQ needed at this point and armor restrictions, but the limitation on 3+ wound models has been lifted.

Read more »
Posted by sonsoftaurus at 9:00 AM 4 comments:

I really should be finishing up the Cultists instead, since I'm currently using them in the league, but got inspired to work on these guys instead.  Maybe fighting all those Librarians and Grey Knights activated some psyker-jealousy.  So I did more work on these guys, "overseen" by the enigmatic Mors Vaul (in black, above).

I had seen versions of this online a while back, as have most of you no doubt. I wanted to do it for a while, but just recently got around to it. 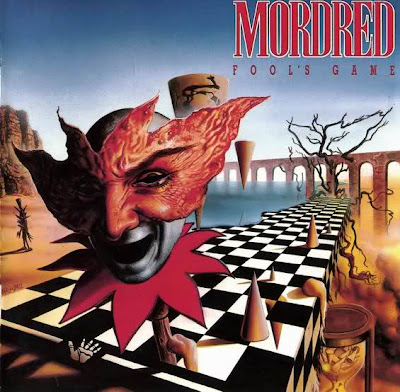 This week I managed to be a game playin' fool, getting no fewer than four 40K games in.  Rawr!  Unfortunately soon I'll need to return to the grindstone and crank out a paper for Monday, then more work on end of semester stuff, but it was a fun week.

For another participant's experiences so far in the league I'm in, be sure to stay abreast of My Little World of Dementia.  He's got a post up yesterday about his first couple of league games using his Catachans.

On Tuesday I went down to the local Hobbytown, and got an 1850pt game in with Joshua and his marines, using my Word Bearers.  We rolled up Annihilation, Dawn of War and got started.

Read more »
Posted by sonsoftaurus at 8:00 AM 2 comments: 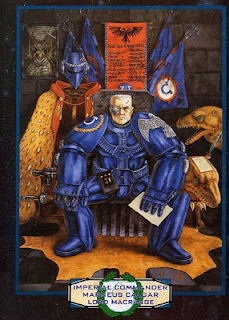 Joshua is a good guy, and a good gamer, but in the oft-judgemental group that is the 40K community, he can't always be himself.

I mean, it's pretty obvious to me.  It's obvious to everyone he plays.  But should the topic come up, he denies it.

Today I asked him about it, if he somehow had something against it himself or something, because it seemed so evident.  I tried to be tactful, as it's a pretty sensitive topic to broach with anyone, much less someone you don't know really well yet.

He said he didn't have anything against it, no, and that he'd tried letting himself be who he was fully around the other 40K players, but the negative attitude of some of those players caused him to retreat a bit into his shell and to try to avoid the topic.

You see, Joshua has a not-so-secret-secret.

Delayed post from last Tuesday's games.  Sorry for the delay, but accidents, illness and crunch time at school combined to leave little time or mental acuity for an actual post.  Apologies for the pretty lousy pictures too.  My wife keeps buying more sophisticated cameras and my pictures keep getting worse. :-/


Some rough reports on a couple of test games for the Spring/Summer league going on locally.  I brought my 500pts down expecting a number of the locals who had expressed interest to be there to get things rolling.  Early on, no such luck but Joe was game for whipping up a 500pt list with his own IG for a quick match.


Read more »
Posted by sonsoftaurus at 8:26 AM No comments: