Two weeks of pictures, some games with more than others.
Read more »
Posted by sonsoftaurus at 7:12 PM No comments:

Iron Within, Iron Without

I had always liked the idea of the Iron Warriors.  Siege warfare, trenches, ruthless application of logistics and firepower to achieve their goals.  I never got around to making them before, as I didn't really picture them as the standard Chaos Marine kits, even with the upgrade set GW released 3rd edition.  The extra ornamentation, horns and such always seemed to fit armies like Black Legion and the Word Bearers well, while the cult legions had their own aesthetics.  But it didn't fit Iron Warriors well to me.  Neither did regular marine kits, focused on Mk VI and VII armor with eagles and purity seals featured prominently.  So I waited.

Another week of mayhem and merriment hunting down the Shards of Anaris!

sonofsonsoftaurus is getting the knack for themed tables, developing a battle scene with several chaotic shrines.  My Endless Ones faced off against his Ultramarines to recover bits of information that would help lead us to additional pieces of the god-weapon, Anaris.

Read more »
Posted by sonsoftaurus at 7:31 PM No comments: 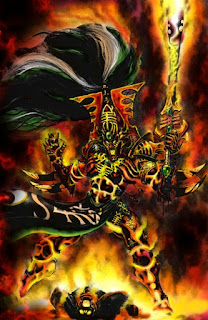 Updated campaign packet with some player feedback (some thought the spawned gribblies were too strong/went too far afield) and idea for extra mission type.

40K Campaign - The Shards of Anaris
When Khaine slew Eldanesh, he took the sword Anaris and claimed it as his own. However when Khaine was shattered in battle with Slaanesh, the sword was also splintered. Several of the splinters have been recovered and used to craft powerful weapons for Eldar champions. As both Khaine and the blade were fragmented in the same event, what effect might re-forging the blade have on Khaine himself?

This campaign tells the story of the contest over the course of decades or even centuries to recover the various Shards of Anaris scattered across the galaxy. Several forces are on the trail for their own ends, either to try to use the power or merely keep the power out of the hands of others. They will battle over knowledge leading to the shards, then over the shards themselves and may even track down where their rivals are storing their collections and try to steal them away.

Read more »
Posted by sonsoftaurus at 6:05 PM No comments:

My family and I were on vacation the prior week, but sonofsonsoftaurus and I returned to the campaign today.  Counting us we had six players and five games were played.  We also did some work on updating a few of the store terrain pieces.

My first game was with Scott's Space Wolves, fighting over one of the Shards of Anaris.  I brought a Nurgle force this time led by Typhus.  Scott had a variety of marines and a formation of rune priests.  Our fight was held on an old battleground, with several minefields scattered about.

Read more »
Posted by sonsoftaurus at 10:41 PM No comments: