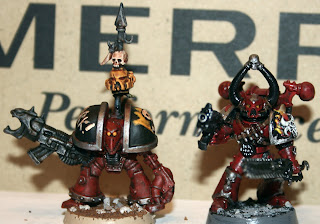 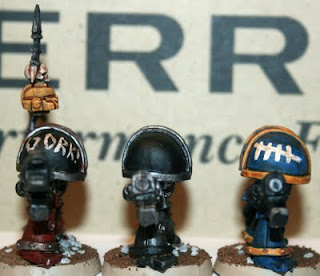 Posted by sonsoftaurus at 5:09 PM No comments: 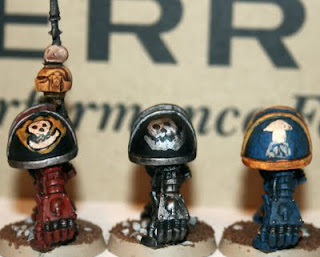 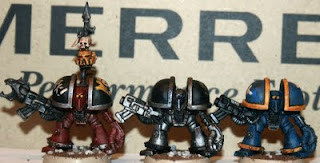 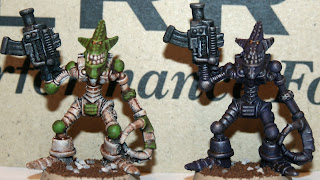 Here are my Ardboyz for my Orks list. Old RT era Orks in power armor and old tinboy/runtbot figs. Two squats in metallics, Panzee, Dark Panzee, Burny Skulls beakie (Word Bearer), Shiny Skulls beakie (Silver Skulls), and Blue Boyz beakie (Ultramarine). I did the Word Bearer and Silver Skulls knockoffs as I have those two armies, don't have a regular marine opponent to mock with the other guy so went with a generic Ultramarine.
Posted by sonsoftaurus at 4:48 PM No comments: 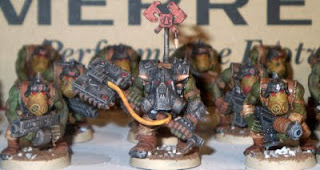 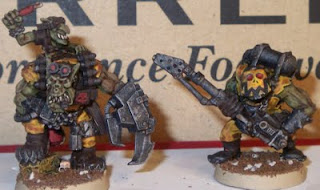 I've been able to get a little progress in on my Orks lately, and today was a good weather day to seal the fellas I've gotten done. So here are some shootaboyz and a group of Kommandos.
Posted by sonsoftaurus at 1:39 PM No comments:

For those of you not familiar with the term, it refers to using a wood stain on figures as a shading medium, a quick way to get the effects normally obtained through washes, blending and highlighting. It's loads quicker, looks fine for tabletop, but isn't going to win you any prizes. If you want a Golden Demon, keep practicing those techniques. If you just want to crank an army out, especially if that army is in earthy tones like reds and browns, dipping may be an option.

The initial technique, as indicated by the name "dipping", is to dip the figure into the stain, then shake off the excess. This is obviously pretty messy, so do it outdoors! I've been brushing the stain on instead, and it works fine that way, with a lot less mess.

Yesterday though I heard a friend talk about using a spray stain on some wood. Spray stain? That could make everything even quicker? A quick search and I found this:

Will probably try it out on some figs soon, and will post up the results. Anyone tried it yet on figures?
Posted by sonsoftaurus at 8:45 AM No comments:

After watching one too many children's shows, this came to me. Those of you with young kids will understand.

Hey dere! I D’Ork, and dis is my Gretchin, Grots. Say hi, Grots.

We’s got to figure out dis new rule, but not sure how to use it.

Who do we yell for when we don’t know what to do?

The FAQ! The FAQ!

What does the FAQ say, D’Ork?

Oh no, D’Ork! But the RAW is unclear!

I guess we should do it my way. Fluff supports.

But D’Ork, fluff isn’t a sufficient justification for rules! Dis game, not novel!

Oh no! Da Codex Creep wants to steal our good rules for their next book!

Whew, that was a close one D’Ork!

Nothing! Let’s just roll a d6.
Posted by sonsoftaurus at 8:10 AM No comments:

WYSIWYG vs. counts as vs. proxies

Warhammer and Warhammer 40,000 are games played with miniatures. Little plastic, metal or resin men, monsters and vehicles represent the forces at the players’ disposal. We spend a lot of money on gathering up the ones we want to use, and a lot of time figuring out exactly how to present them – posing, converting, painting, and so on.

Several basic concepts of imaginative play and creativity have over time taken on terms in the Warhammer community. Sometimes these ideas come into conflict, and a lot of things I’ve read online seem to confuse the terms or hold one or the other up as dominant over the others. Here’s my take on them:

• WYSIWYG – “What you see is what you get”, shorthand for the idea that if it looks like a duck, it should fight like a duck, not a crocodile.
• Counts as – substitution usually done as part of the planning for the figure/force, often to create a particular theme or do something different modeling-wise.
• Proxies – substitution usually done on a temporary basis, such as to test out alternate units/load outs before committing to a purchase or modeling job.

At first glance it would seem that WYSIWYG would indeed conflict with the others. I don’t think that has to be the case. Let’s look at each of them individually, then at their interactions.

“What you see is what you get” seems like a good basic idea for a miniatures game. You’re using the miniatures as a kind of shorthand for the abilities of the units in question, so shouldn’t they be as accurate as possible? If the person represented has a lascannon or a bolter or a power fist, shouldn’t that be shown? And shouldn’t those things be easily distinguished from an autocannon or a lasgun or a thunder hammer? With normal WYSIWYG, a player familiar with the various rules and normal miniatures for the different armies should be able to quickly look over another army and have a pretty good idea about what everything is and what it does. It saves time and helps to avoid confusion.

“Counts as” is used for when the normal official models and figures available don’t meet the needs you have for the army. Maybe there’s a particular theme you want to do, like a Harry Potter-themed Empire army, fantasy Skaven as a 40K force or Orks riding giant lobsters. Maybe there’s a particular conversion you want to do such as using wings instead of jump packs on your assault marines. Or perhaps there isn’t an official model so you need to come up with something to use for the unit, such as for a Deathstrike missile launcher. All of these are situations where “counts as” comes into play, using one visual representation to stand in for the normal Games Workshop version.

Proxies are similar to “counts as” in that they are both used to represent something else. Where counts as is a more premeditated decision trying to get a particular effect, proxies are usually temporary substitutions and may be wildly inaccurate from a WYSIWYG standpoint. Using some spare drink bottles to stand in for those drop pods you wanted to try out, using a carnifex to represent that dreadnought you forgot to pack or using that G.I. Joe tank as a Baneblade for an impromptu Apocalypse game are all examples of using proxies.

So how do these different ideas interact? Mostly it’s a matter of how counts-as and proxies interact with WYSIWYG. Some conform to a very strict interpretation of WYSIWYG, holding that if you’re going to use the rules for a particular unit, you should use the official model for that unit. Any deviation is considered confusing at best and at worst unfair.

I think that interpretation is overly strict. WYSIWYG should be about clarity, not conformity.

I’m also fine with proxies, as long as they’re reasonable. To me, using an Ork Nob with a powerklaw to stand in for a Space Marine with a power fist is an easy proxy. It’s clear that the figure with the Space Marine squad in a Space Marine army is using the stats for a marine, and not an Ork. Likewise the powerklaw and power fist have identical rules anyways so it’s easy not to confuse it with a chainsword or missile launcher. Using a dreadnought with a multimelta and saying it’s actually a twin-linked Lascannon? No problem. Using three dreadnoughts with multimeltas and saying one is a multimelta, one is a plasma cannon and one is an assault cannon? Confusing.

So the next time you see that gamer with the Star Wars, Sesame Street, or Spider-Man army ask for a game. You may even have fun. And the next time you’re planning out the conversions for your next force, take some time to look at it from a stranger’s point of view – is it easy to understand what everything is? If not, rethink some of the conversions and see if there’s another option that can still work with your theme but be more easily identified. Your opponents will thank you.
Posted by sonsoftaurus at 9:48 PM No comments: