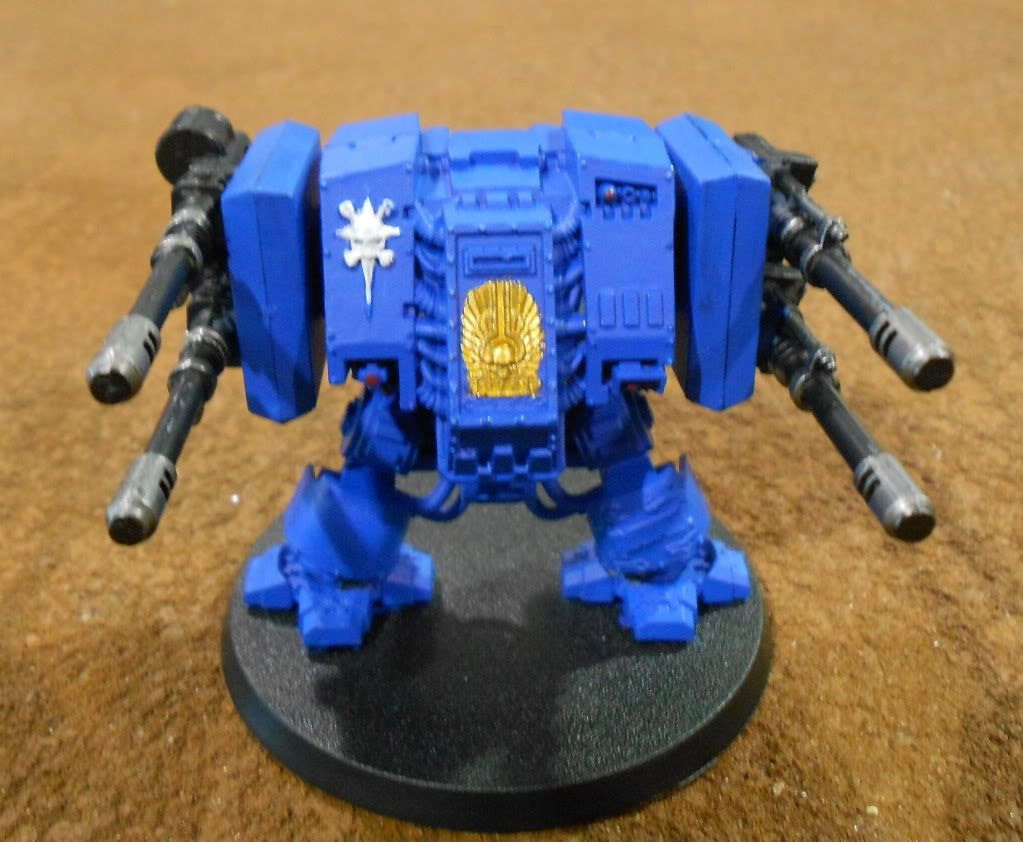 Had a game with Josh and his Ultras earlier.  He had recently worked up a rifleman dread (see left).  I think it's a neat way to make extra arms for a dread - two square bases glued together on the hollow sides, hole drilled in one side big enough to slide over the dread arm tab.  Some extra IG autocannons and done.  Only downside IMO is the need to have one set upside down due to the ammo drums.

We threw down with 1850pts, Capture and Control, Dawn of War.

Sharks it shall be!


There were a few votes for other options, but the bulk went for the Space Sharks.  So be it!  I've started sorting out bits and organizing to start construction soon.

Here's what I'm working on at building at the moment.  Mostly it's a conglomeration of stuff I think is cool (dread, pods, bikes, jump packs, speeder, whirlwind) first, with effectiveness considerations secondary.  I don't expect it to be a super list, but if I'm missing some obvious tricks, I'd be happy to hear advice on that front.  While I plan on using Codex: Space Marines, I also for grins converted that list into Blood Angels and Space Wolves to see what it would look like.

In Part One we reviewed some of the common themes in 40K names for units and groups.

In Part Two we looked at naming themes within different races, such as with vehicles and weapons.

In Part Three we'll look at some places to find inspiration for names, particularly for characters.

I should be typing up my final paper for the summer, but I'll take a break to churn out a quick batrep.

Tuesday I managed to get a game in with Chris and his Death Guard.  A third party picked a mission for us out of the Battle Missions book (Implacable Advance) and we got ready to go.  The table is divided into three parts, and you deploy from the short edges.  One objective in the middle of each 1/3 of the table, and once you hold an objective it remains yours unless the other guy takes it.  Everyone is also Stubborn, which doesn't matter for the Fearless Plague Marines, and there's no Outflanking though that doesn't matter for our armies which are both pretty straightforward.

I have a bunch of guys with guns and three Russes (two standard, one Eradicator).  Chris brings three squads of plague marines, a dread, a land raider, and a lord and sorcerer.  DG are in the role of "Necrons" for the scenario so they get to go first.

Where do we go from here?


With the Scythiak put to rest for a while, I have an opening for my next project.

But what to do?

As frequently happens, I have multiple appealing options, but obviously trying to do them all at once would get me close to nowhere.

Do you, my beloved readers, have anything in particular that you'd like to see?

Which of the options would make you more excited about coming to see and even comment on?

It didn't feel right signing off of the painting for the Scythiak project without a complete army pic, so here you are:

Scythiak Usurpation - End of the Revolt

For now at least.  It's been over a year since I officially started the revolt and it was even further in coming, with ideas and collecting figures.  But for now, I'm calling them done and will be moving on to other projects.

There's still lots to do for the Scythiak, but it will have to wait for more favorable times.  The second squad of rough riders, various tanks, and some extra infantry to sub for the Ogryn points-sink from time to time will have to bide their time.

But here's the last to be done this wave; some priests and Astrakenor with his command squad.  My RPG group had arranged a few weeks ago to come over this evening, but apparently they all forgot so I had some extra time and finished these folks off instead.

Priests with ceremonial eviscerators.  Of course, when your "ceremonies" include sacrificing your opponents in battle, they can be rather functional too.

Read more »
Posted by sonsoftaurus at 10:14 PM No comments:

If you're just joining us, you can find part 1 HERE

When last we checked in, the Imperials had a rough turn, losing a vindicator and a terminator squad.  Now the Baal Predator with flamestorm cannon shows up and joins the Dark Angels speeder in bedeviling the Scythiak heavy weapons section. 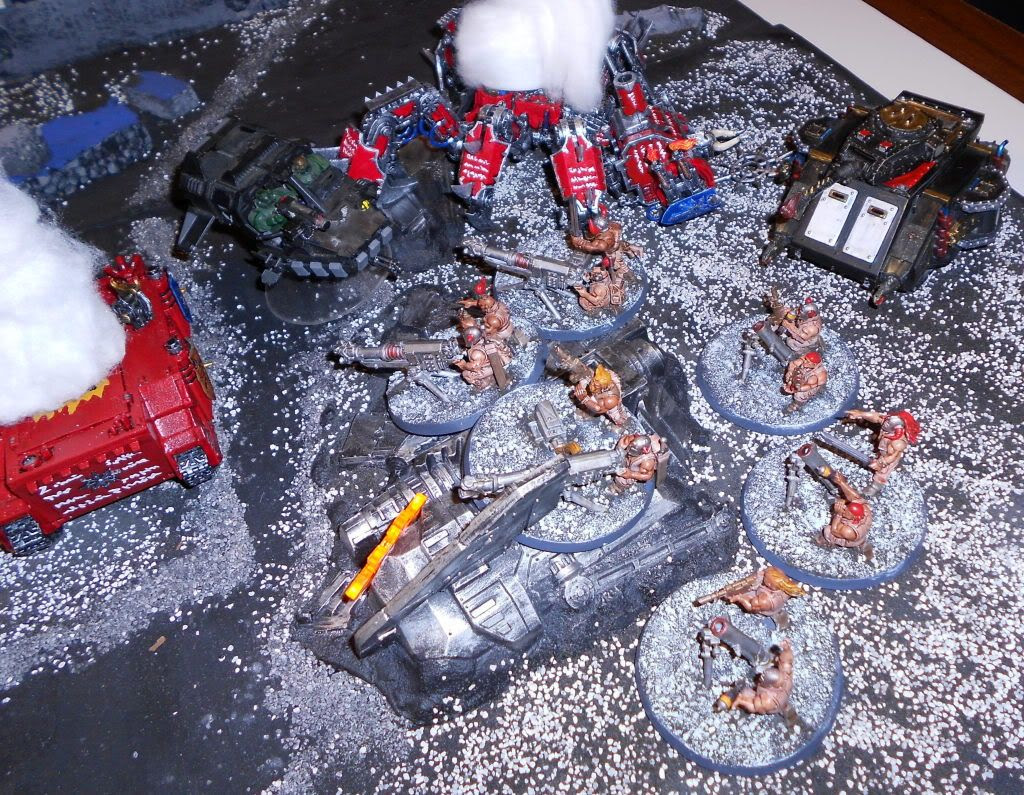 Part one can be found HERE. 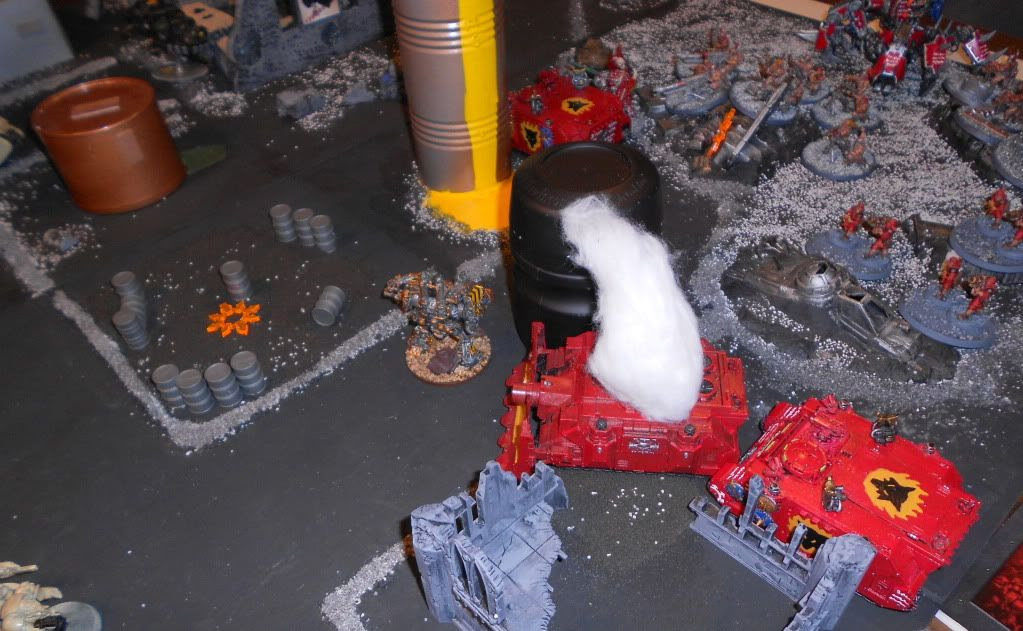 The Chaos Vindicator bites the dust from long-range fire, and the Blood Angels dread tries to take out a rhino instead, but misses.

Read more »
Posted by sonsoftaurus at 8:05 AM No comments: 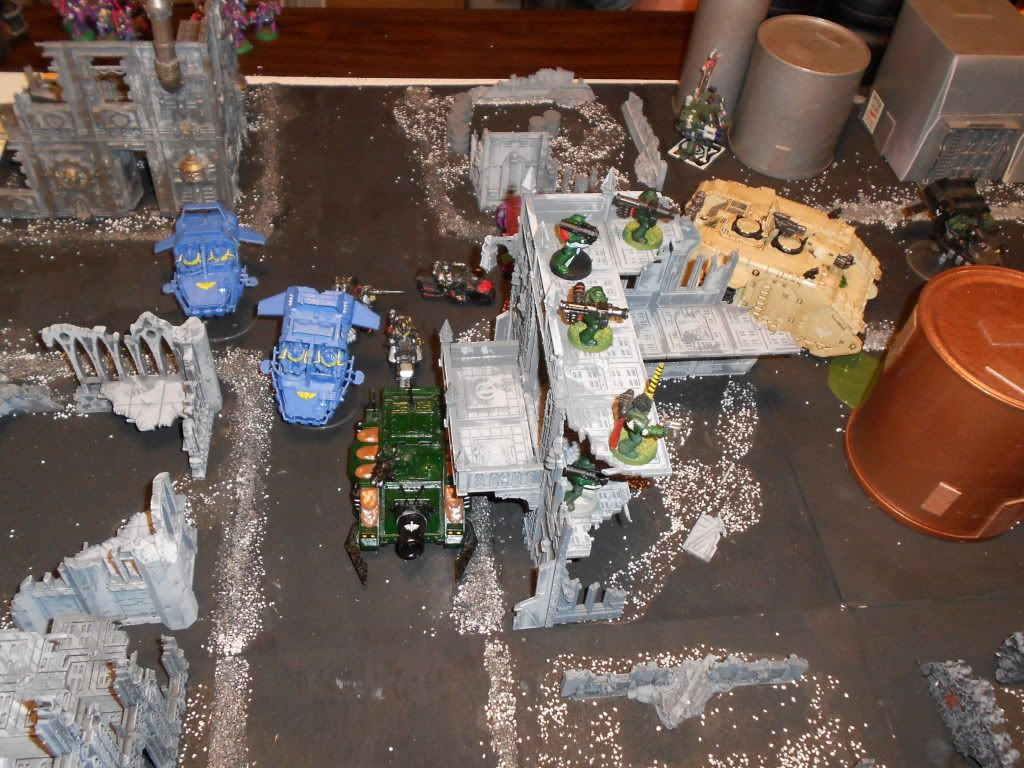 As mentioned in the previous post, we had a 3000pt battle the other night, with my Scythiak and Word Bearers staring down at Dark Angels and mixed crusade force (Blood Angels).  We went with a four-objective Seize Ground mission and Spearhead deployment.  Naturally I lost the roll to choose sides/go first, and was stuck relatively in the open, though there's not TOO much open on this board.

Read more »
Posted by sonsoftaurus at 9:53 PM No comments:


John came over for a league game last night, and had the good idea to invite Seneca along too, so instead of just our 1500pt league armies we also had Seneca's Dark Angels along for the ride, with my Word Bearers backing up the Scythiak to balance things out, so 3000pts a side.

Stay tuned for the Forces of Chaos against the Angels of Death, a three (?) part series coming soon!

Posted by sonsoftaurus at 11:07 AM No comments: 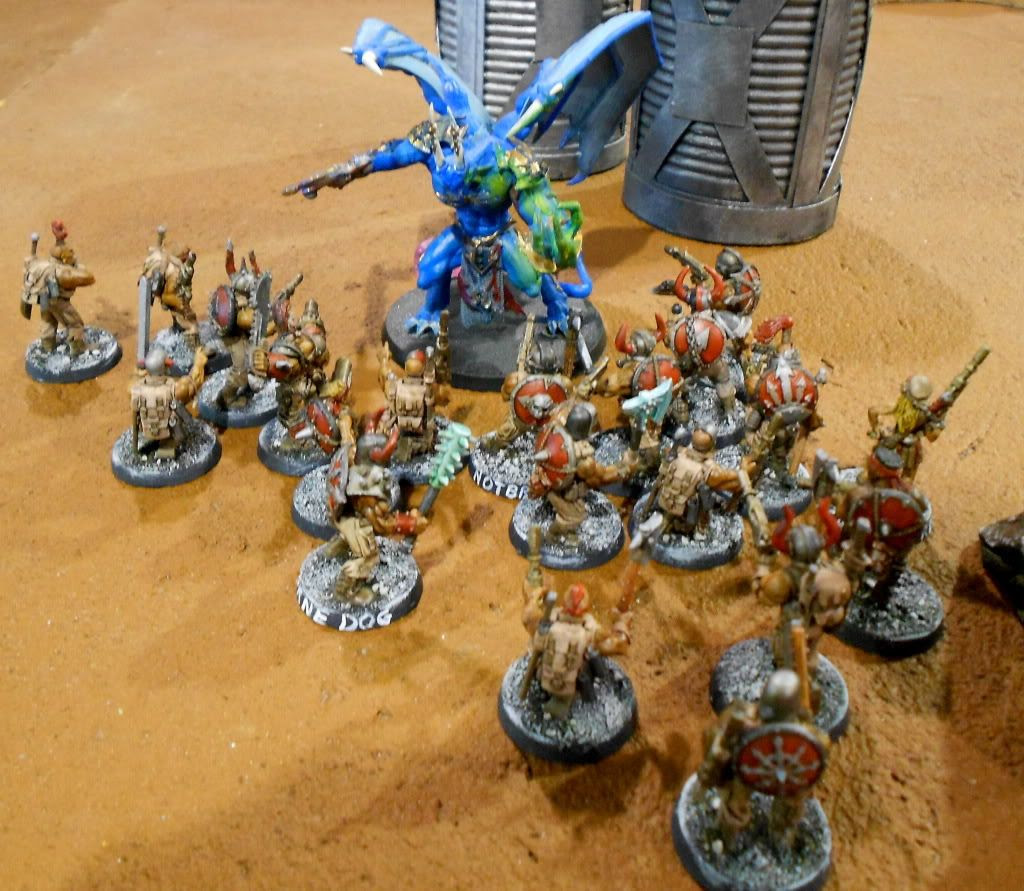 Apparently the Scythiak made some error in their recent rituals, as today found them attempting to fend off a Daemonic incursion!
Read more »
Posted by sonsoftaurus at 9:09 PM 8 comments:


Finished up one squad of Scythiak Rough Riders this evening.  Above are the first five, including Tramplemaster Gyro, center, who has recently Scythaik-ized his name a bit more to "Gyrok".


One of our local players, who I unfortunately don't get to see/play that often has finally set up his own site!

I think that the last time I actually played Chris was back during our Vogen campaign, when my Word Bearers and his Imperial Fists clashed a few times.

Chris has tons of great figures and is cranking more out all the time, such as the gent on the left here.  Sculpting, modeling, painting, gaming - he's a great all around hobbyist.  Lots of Chaos stuff will likely feature, but also Imperial Guard, Imperial Fists, Blood Angels, and likely more.

Go get in on the ground floor on this one folks, it's going to be a great one! 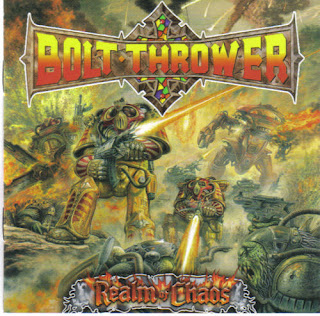 OK, a lot of compilation and typing and I've got a more complete (as far as rules) basic version ready.

Check it out HERE, and please give me any suggestions or comments you may have, either on the blog, by email, or at The Codex Project.  Thanks!

Battle Report: Scythiak Usurpation vs. Ultramarines plus other goings-on 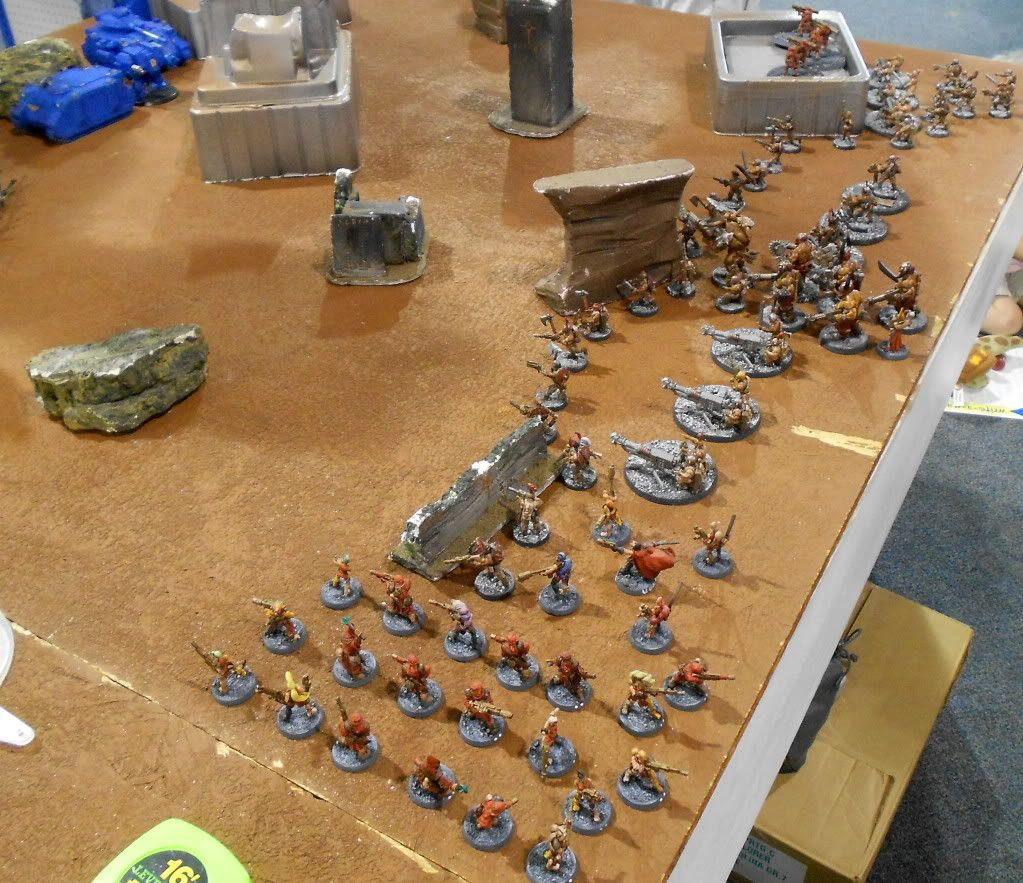 I recently squeezed in a 1250pt game with Josh and his Ultramarines.  We did Annihilation, Pitched Battle deployment to keep things simple, and crammed into a 4x4 board.


Took a few shots of some terrain I made on a whim a few weeks back.  Little pieces that can be used in WHFB as stegadon/carnasaur eggs, in 40K as alien/tyranid eggs, or in pulp stuff as dino eggs.  Plastic Easter eggs, CDs and plastic lids for bases, various flock and moss stuff, hot glue/glue, paint, sealer.  Marines for scale.  If Heroes HQ is interested these may find a home there, if not I'll add them to the woodland/jungle selection here at home.

Codex: Lost and the Damned WIP

Here's the current WIP scribblings so far. Feel free to comment here or over at The Codex Project.