Earlier this week ran across Miniature Giant and decided to give them a go. Found some nifty looking minis from the HeroQuest line, placed the order on the evening of the 26th, and on the afternoon of the 29th they were in my mailbox. Not shabby at all!

So go check 'em out! They've got Reaper stuff, including discontinued figs, as well as some other lines and it sounds like they're going to be adding more as they go along. Good discounts (generally at least 26% off), and shipping and handling in the US can be as low as only paying a 50 cent handling fee. Plus as a special bonus with their Recruit Rewards program you can get extra discounts be being referred by a friend or referring one. And since you're all my friends, feel free to enter "jimebarr" as your Referring Member when you sign up and we can both get extra discounts as a result!
Posted by sonsoftaurus at 5:31 PM No comments:

Some pics of various minis I've done over the years, from a variety of manufacturers such as Reaper, Lance and Laser, Ral Partha and Fenryll. 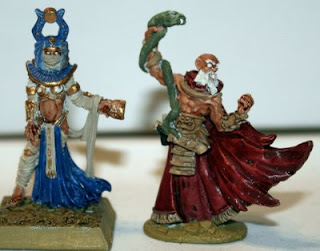 Some player characters from D&D games 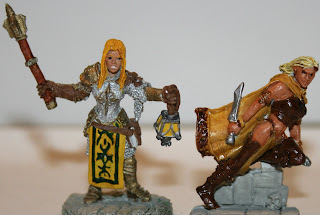 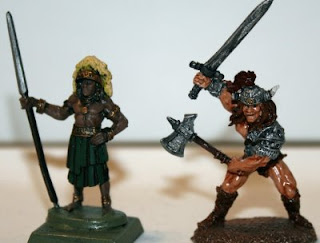 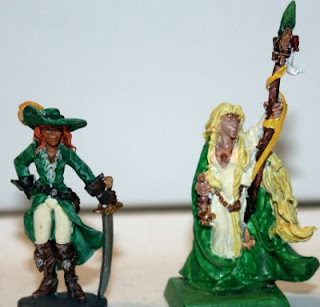 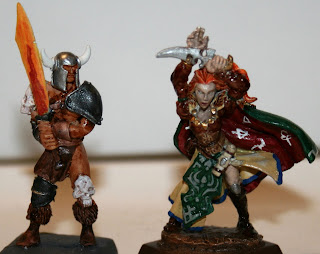 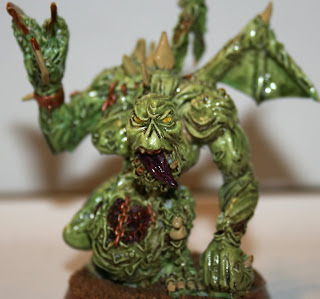 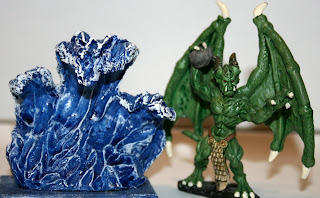 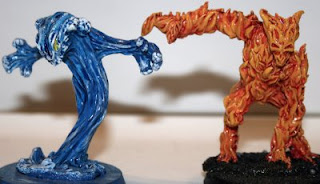 Posted by sonsoftaurus at 7:58 PM No comments:

"Know, O Prince, that between the years when the oceans drank Atlantis and the gleaming cities, and the rise of the Sons of Aryas, there was an Age undreamed of, when shining kingdoms lay spread across the world like blue mantles beneath the stars - Nemedia, Ophir, Brythunia, Hyperborea, Zamora with its dark-haired women and towers of spider-haunted mystery, Zingara with its chivalry, Koth that bordered the pastoral lands of Shem, Stygia with its shadow-guarded tombs, Hyrkania whose riders wore steel and silk and gold. But the proudest kingdom of the world was Aquilonia, reigning supreme in the dreaming west.

Hither came Conan the Cimmerian, black-haired, sullen-eyed, sword in hand, a thief, a reaver, a slayer, with gigantic melancholies and gigantic mirth, to tread the jeweled thrones of the earth under his sandled feet."

Such is the age of Conan the Barbarian, most famous of the characters created by Robert E. Howard. As great a characters as Conan is, he would not be nearly as memorable without the vibrant setting Howard created for him to inhabit, the world of the Hyborian age. A world full of wizards, raiders, mysterious kingdoms and the clash of armies and empires.

A world that thanks to a company called RSI you have the opportunity to play in, to take control of the destiny of one of those empires!

Hyborian War is a play-by-mail wargame that debuted in 1984, and has been going strong ever since. Each turn, you mail in your orders for one of the 36 playable kingdoms, the staff at RSI input everyone's orders and the computers generate the turn results, which you get in the mail shortly thereafter. Typical turnaround is 2-3 weeks, though they do have games at a slower pace available.

I played in one game back in 2001, as the sinister power Stygia. I enjoyed it, but at the time had to do a lot of overseas traveling for work and keeping up with mailed turns became impossible. With a heavy heart I backed out of the game, always meaning to get back to it but never did.

Recently re-reading a number of Conan stories I thought about the game again, and re-discovered the impressive community the players have created. While much of the nuts and bolts of the game is hidden, the amount of information the dedicated players have been able to accumulate and share over the last 25 years is amazing. For a prospective new player this community can be an invaluable resource - allowing you to get in-depth information about the various countries to help you choose which you may want to play, how the mechanics work, and providing a number of seasoned players who can answer just about any question you might have.

If you're a fan of Conan and Hyboria (and shame on you if you're not!) check the game out. In a world full of real time games that are over in a matter of hours, sometimes it can be nice to be involved in a longer-term endeavor, to feel the excitement of opening up your dispatches and seeing how your plans - and those of your enemies - unfolded.

Hope to see you there sometime!

Reality Simulations, Inc. - The company that runs the game. Check out this site for basic info and to actually get into the game.

The Hyborian Tome - Fantastic page with all sorts of compiled data, maps, and full introductory reports on all the kingdoms.
Posted by sonsoftaurus at 6:40 PM No comments:

Epic (back in the "Space Marine/Titan Legions" era) is the game that got me back into the Warhammer 40K universe after the initial Rogue Trader surge died down. Space Marines, hordes of Orks, Titans, Gargants, massive Imperial Guard tanks - all in a relatively small space. Good stuff. Before there was Apocalypse, there was Epic, getting those massive war machines and crazy rules involved at a teeny scale.

I like the big stuff like Titans, but don't especially care for Apocalypse. The old Epic rules were fun, but definitely had a bunch of holes in them. The newer versions of Epic leave me pretty cold. So how to get back into the small-scale mayhem?

Flames of War seems to be a fairly popular game, fairly fast moving and has most of the elements for a 40K type game - infantry, tanks, artillery, firepower and close in action, air support...maybe there's potential for making a "Flames of Warhammer" ruleset that folks familiar with Flames of War could easily take to?

At some point I plan to buy/borrow some FoW books to see what would need to change and what kind of stats/costs to assign to things. In the meantime, what kind of ideas might you have?
Posted by sonsoftaurus at 8:56 AM No comments:

Again, rather than try and recreate old work, just posting links to older project logs. Thanks again to the Eternity Gate for hosting them!

Tau Grand Alliance
Posted by sonsoftaurus at 8:36 PM No comments:

Rather than try to recreate everything here, for now at least I'll just link to my old Batreps. Thanks to the Eternity Gate for hosting them!

Heretics (Traitor Imperial Guard plus Adversaries vs. Sisters of Battle)

Goblins (Tournament)
Posted by sonsoftaurus at 8:12 PM No comments: 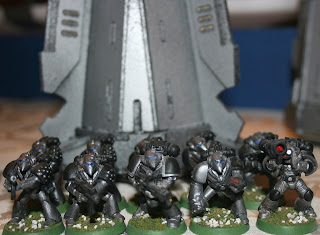 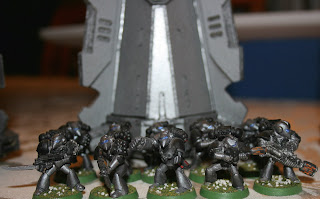 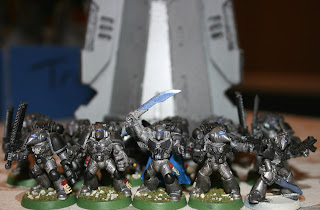 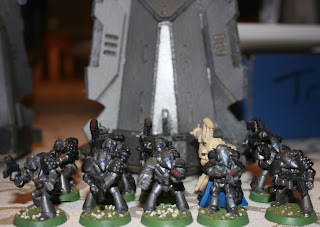 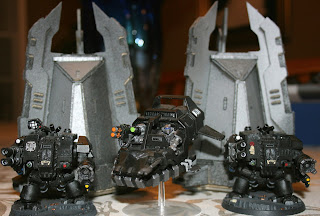 Some pics of my first army after getting back into 40K: Silver Skulls Space Marines. I built them as an all-drop pod force back in 3rd Edition, back before you had actual pods to put on the table. I don't think I actually played them during 4th ed., but reworked them to fit with the 5th ed. codex. I have since painted the couple of extra guys I need to fill out the squads.
Posted by sonsoftaurus at 12:42 AM No comments:

Thanks for stopping by! This blog will track my various modelling, painting and gaming projects, with an emphasis on Warhammer 40K.

Why "Sons of Taurus"?

When I first got back into 40K, I planned on making a renegade group of space marines called the "Sons of Taurus", a group from the Minotaurs chapter that turned traitor after the events of the Badab War. Sadly, nine years later and I still haven't actually built them. I've used the name as my handle on many 40K message boards, so it felt natural to continue to use it.

What should I expect to see here?

Army building projects, battle reports, and other Warhammer related musings. To start with I'm going to bring over logs of past projects and pics of some things I've already done as well as old battle reports. Then as I do more, I'll add newer content! Aside from Warhammer things expect to see the odd Reaper fig here or there as well.
Posted by sonsoftaurus at 9:48 AM No comments: