Over at Gaming Underground, I've been through two 40K leagues this past year.  In the first I built up the Space Sharks; in the second I played the Merkan 76th Imperial Guard, adding a few units over the course of the league.  Soon we'll be starting a new escalation league up, and I'm unsure of what to bring.  So I thought I would solicit some feedback and see what readers/other league participants might want to see in reports/on the table. 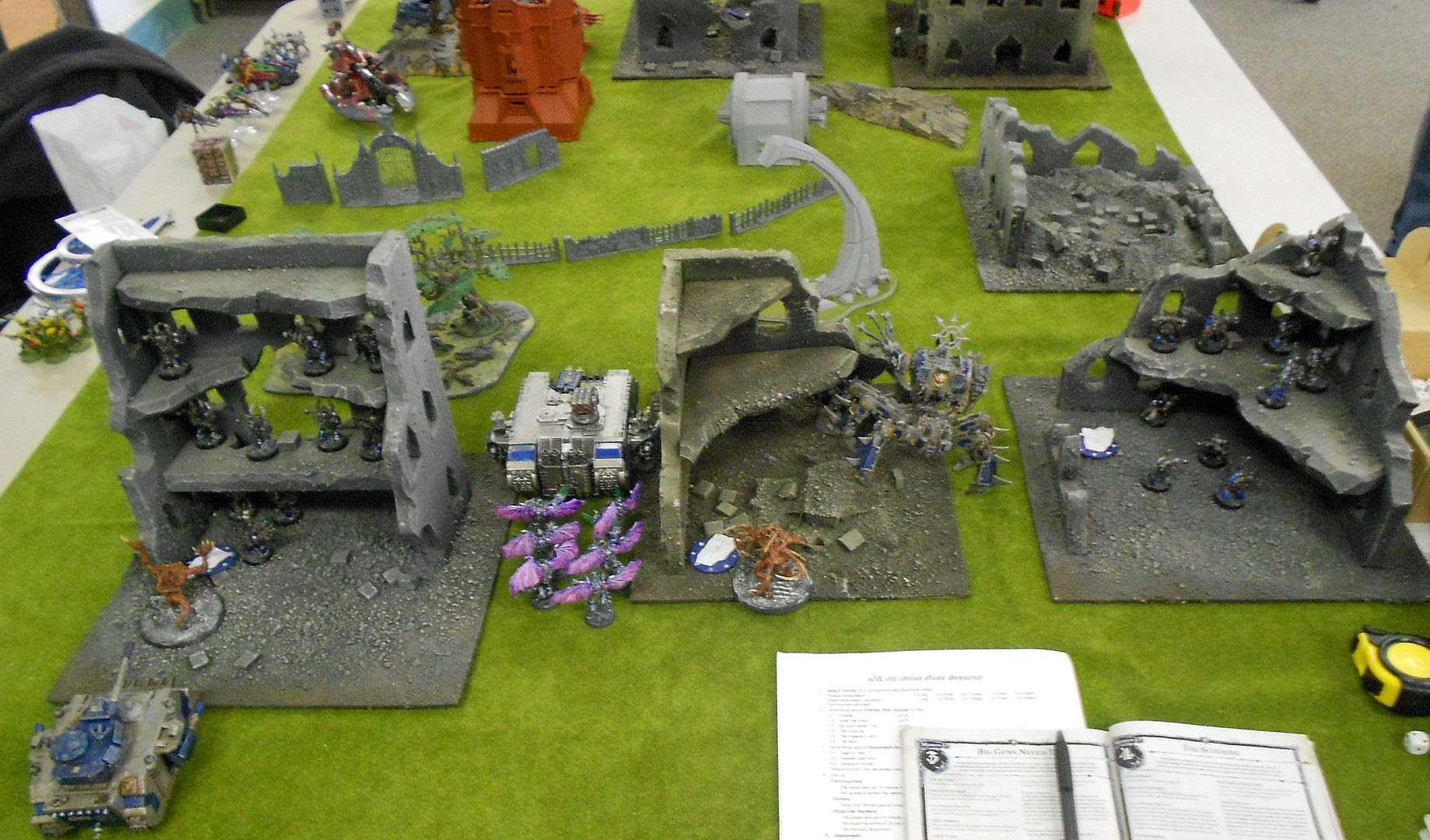 After our painting judging from the league wrapped up, I packed the IG away and broke out the Endless Ones for a game against Corben.  He wanted to play at 1999pts, so I took the list I used against the Grey Knights a few weeks ago and added another spawn and a small terminator squad.

We ended up with the Scouring (variable value objectives, fast attack scoring and extra VP) and Hammer and Anvil (short edge) deployment.  He won the roll for first turn, and set up first.  I tried to seize but failed.
Read more »
Posted by sonsoftaurus at 12:00 PM No comments:

The 40K league at Gaming Underground has wrapped up recently.  Last weekend they did the playoffs for the four tied for first, and Eddie's Grey Knights emerged victorious!  I ended up tied with Vinnie's Tyranids for second place.  Given the four way tie for first, there are those who would call that tied for 5th, but those are just petty.  ;-)

Today we did the army parade/painting competition segment of the league.  Unfortunately only four of us showed up for that, but I took pictures of the participants who did.  I had hoped to be able to see/take pics of everyone's stuff, but c'est la vie.
Read more »
Posted by sonsoftaurus at 9:41 PM 3 comments: 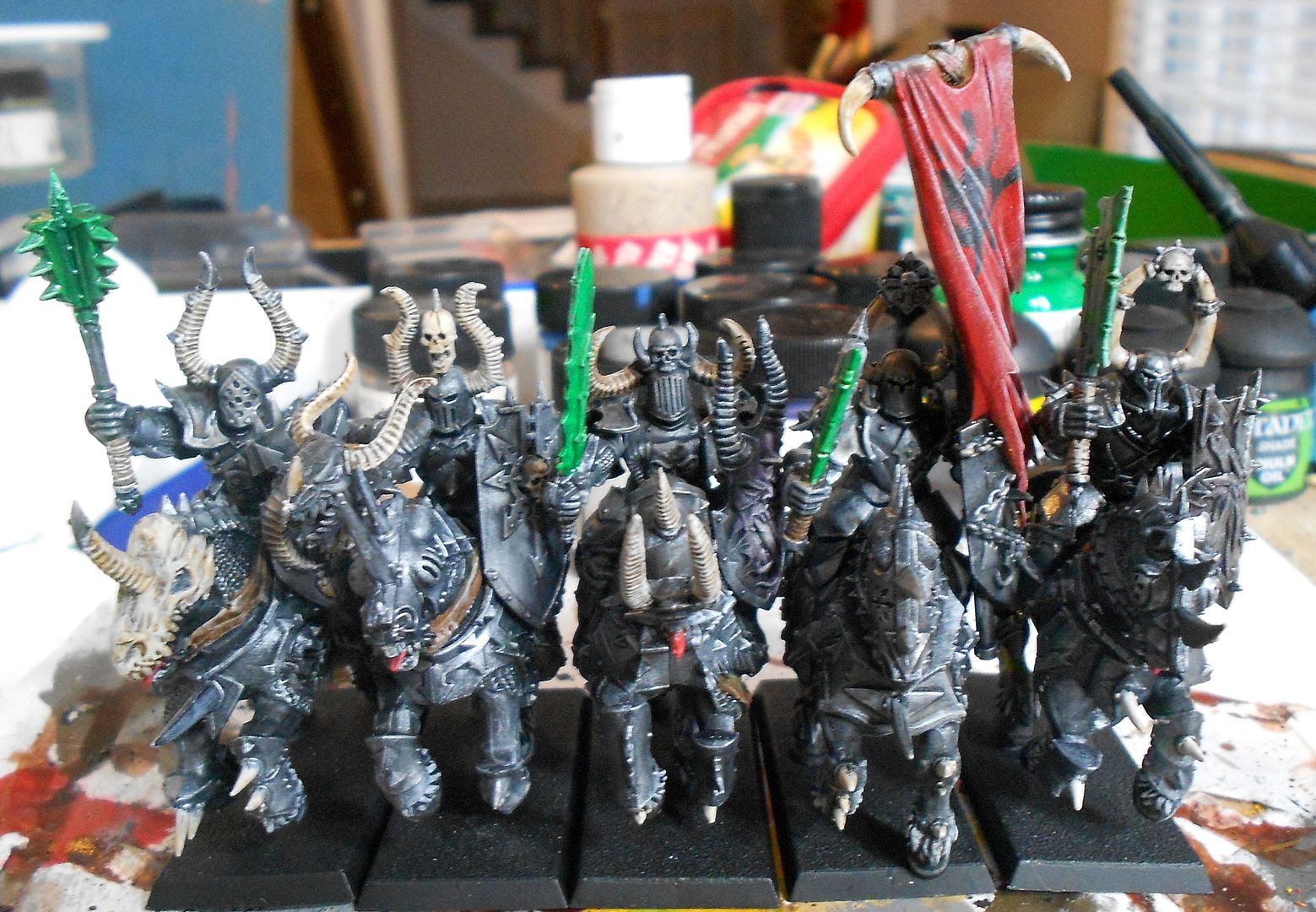 Some more pics of the painted but unbased knights.
Read more »
Posted by sonsoftaurus at 5:42 PM 3 comments: 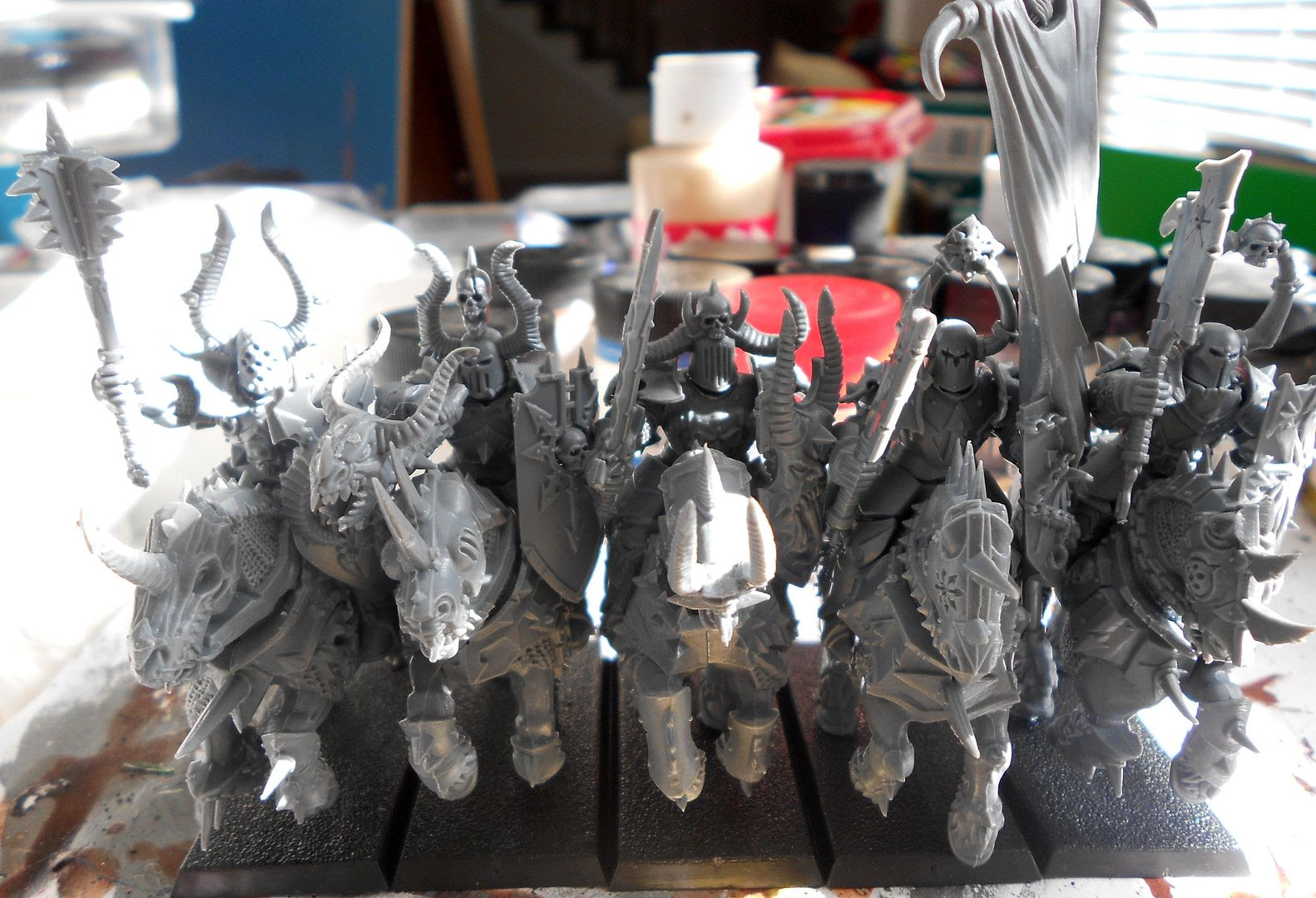 Just some early stage pics of the Chaos Knights I'm working on.  These guys will go along with the Chimera to bring the army up to 1000pts.  Above, built bare plastic, below basic armor paint slapped on.

Read more »
Posted by sonsoftaurus at 2:08 PM No comments:

I got a test drive in with the Endless Ones yesterday, taking 1850pts against Josh, aka "Bean" and his Grey Knights.  This was my first game against Josh and I found him to be a fun, easygoing opponent who persevered even in the face of some atrocious rolls and my constantly having to look things up for the unfamiliar new Chaos book.  Just how does Gorechild work?  What counts as a daemon?  How do Beasts work?  By the end of the game I had a better handle on a lot, but I appreciate Josh putting up with me and the first time using the new Chaos Marines.  I'd faced them a few times, but using them yourself is a bit different.

Read more »
Posted by sonsoftaurus at 7:46 AM 3 comments: 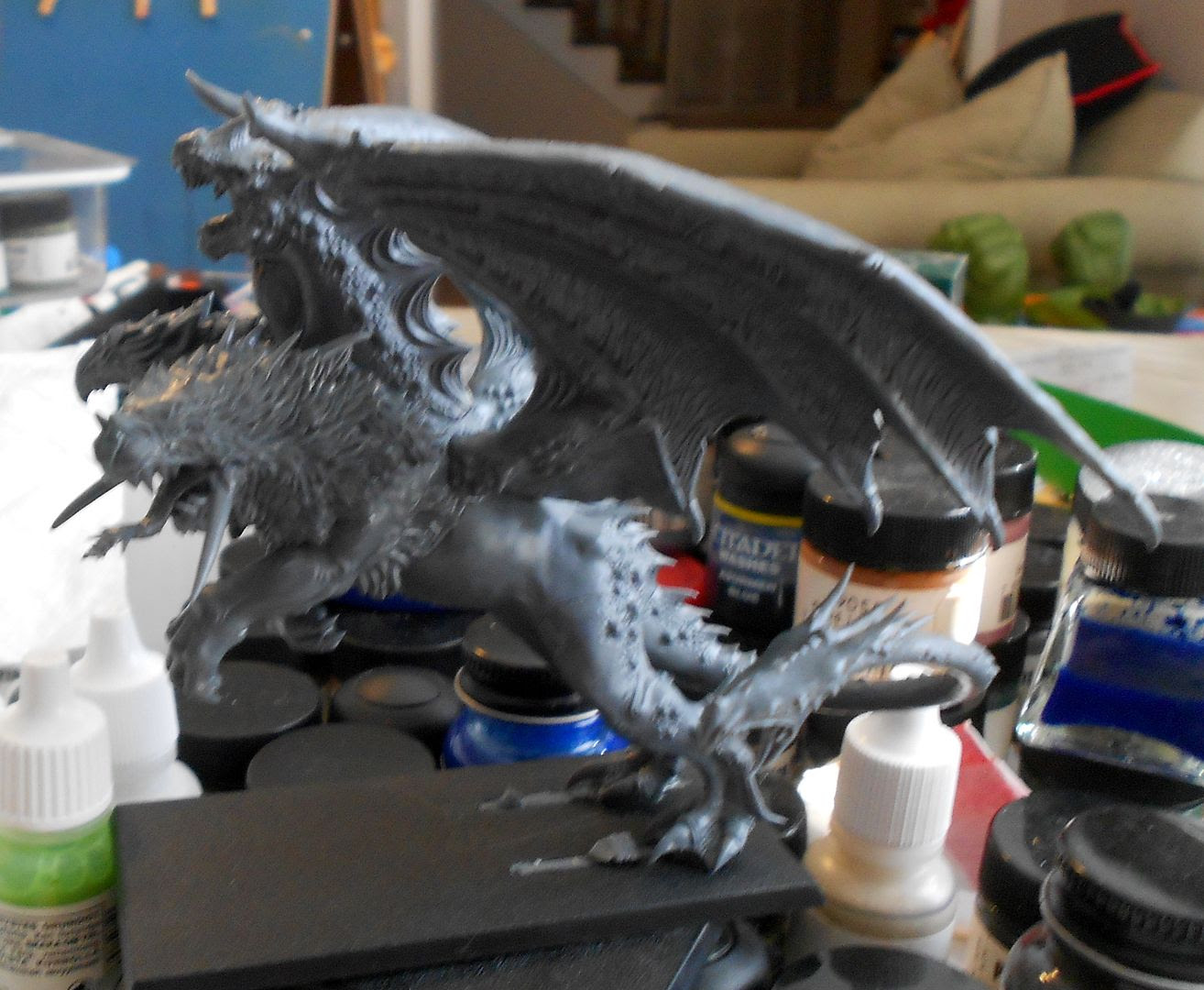 Rahr!  I've had this Chimera for a while (along with a Manticore and lots of other Chaos stuff) but being able to use it in the new Warriors of Chaos book prompted me to put it together.  There are also some Chaos Knights that I'll be putting together soon to go with the Chimera and bump my 500pt campaign army of Bargarians up to 1000. 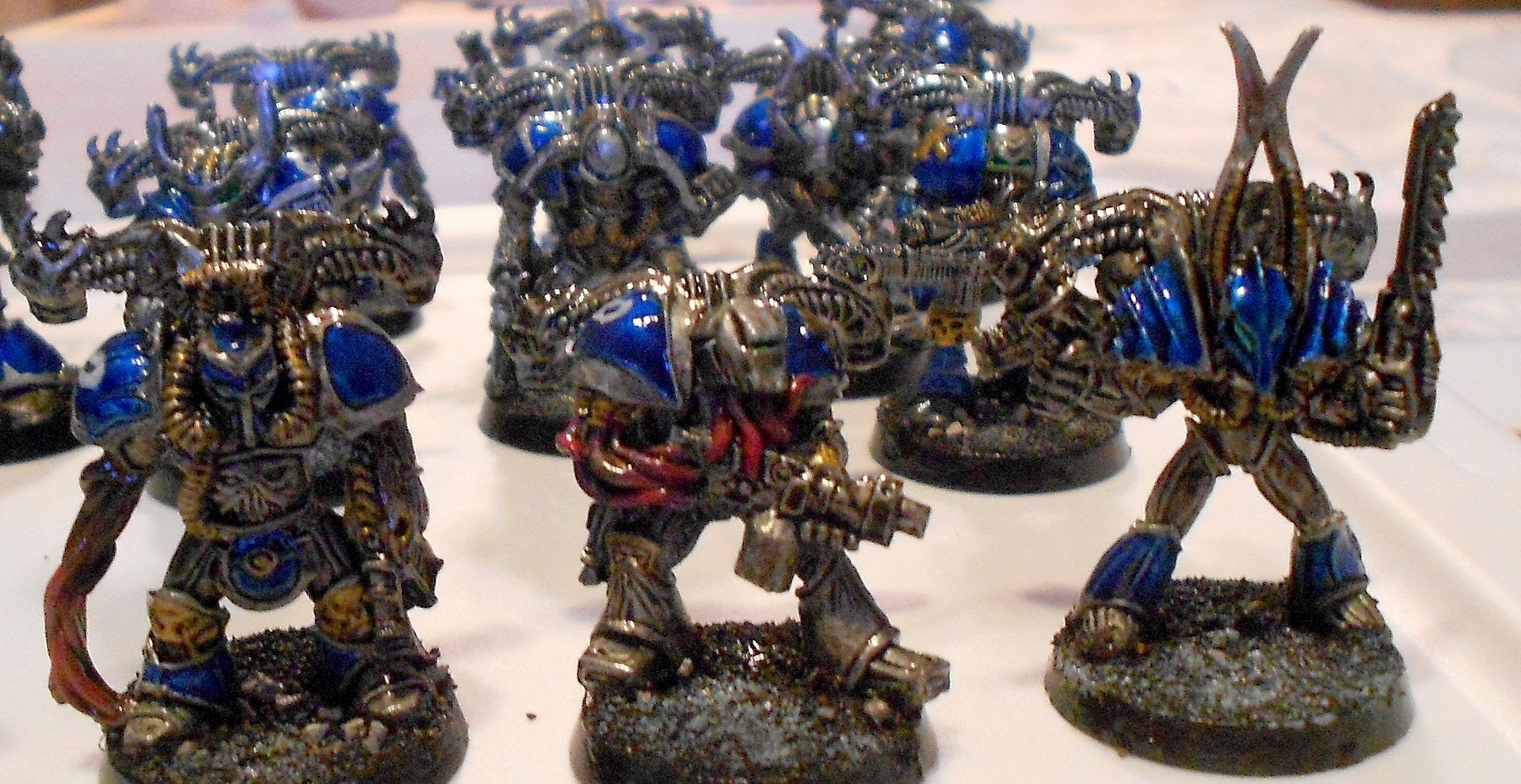 Some finished pictures of the recently worked on Endless Ones.  It was nice enough outside today to spray, so I rushed through the bases for the guys I was working on and sprayed them and the other guys I'd been working on lately.  Oh!  Forgot my recent IG guys, will go dig them out and spray them when I get done posting this.

Sunday I played what may be my last game of our recent 40K league, against Will's Chaos Marines.  The top four scorers will go on to a playoff.  I have no idea of my score or relative standing, but with something like a 50/50 record if I do make it to the playoffs it will likely be as the fourth out of four.

This game was at 1750pts.  Since it was going to be the big points value, I wanted to bring in my big commander so General Starken (aka Iron Hand Straken) made an appearance as well as the things I'd recently painted, an autocannon squad and the Hydra.  We rolled up Purge the Alien (Kill Points) with a Hammer and Anvil (short edges) deployment.
Read more »
Posted by sonsoftaurus at 12:47 AM 3 comments: 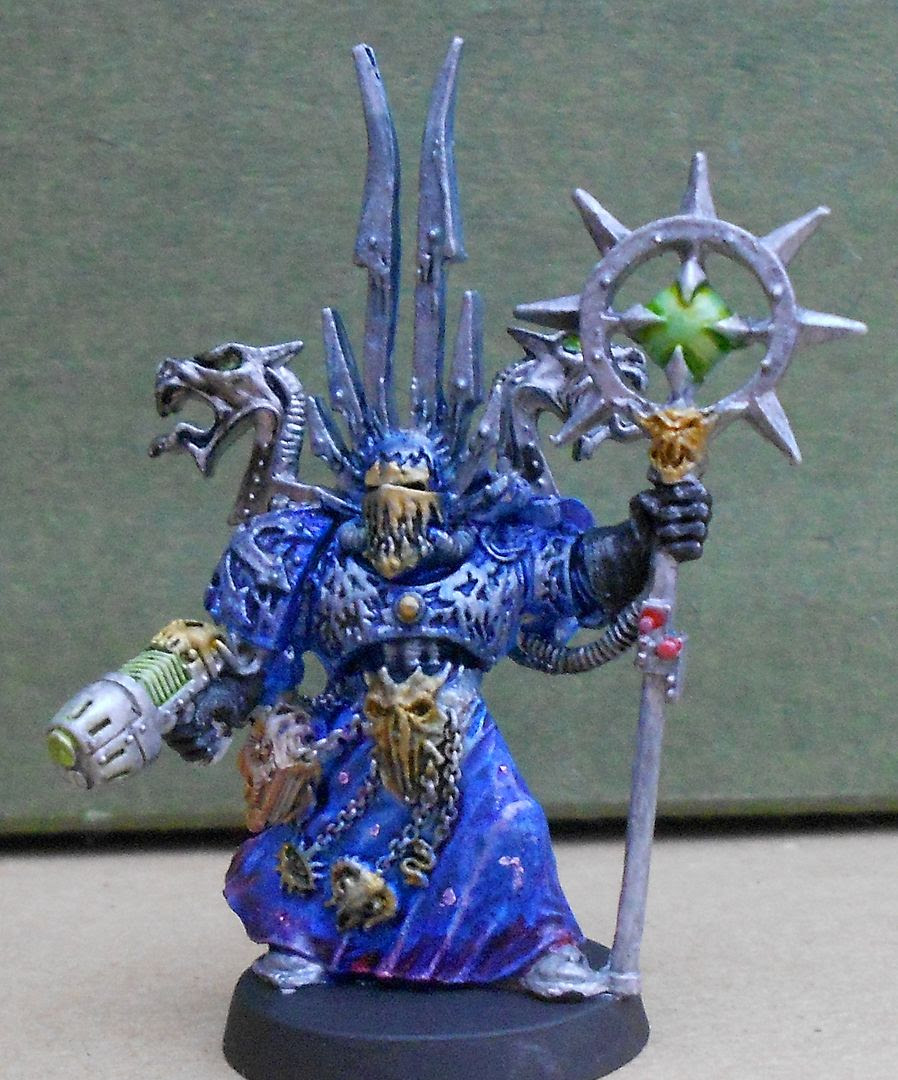 Some more WIPs of some Endless Ones.  A little more work done on the sorcerer, above.

Read more »
Posted by sonsoftaurus at 10:45 PM No comments: