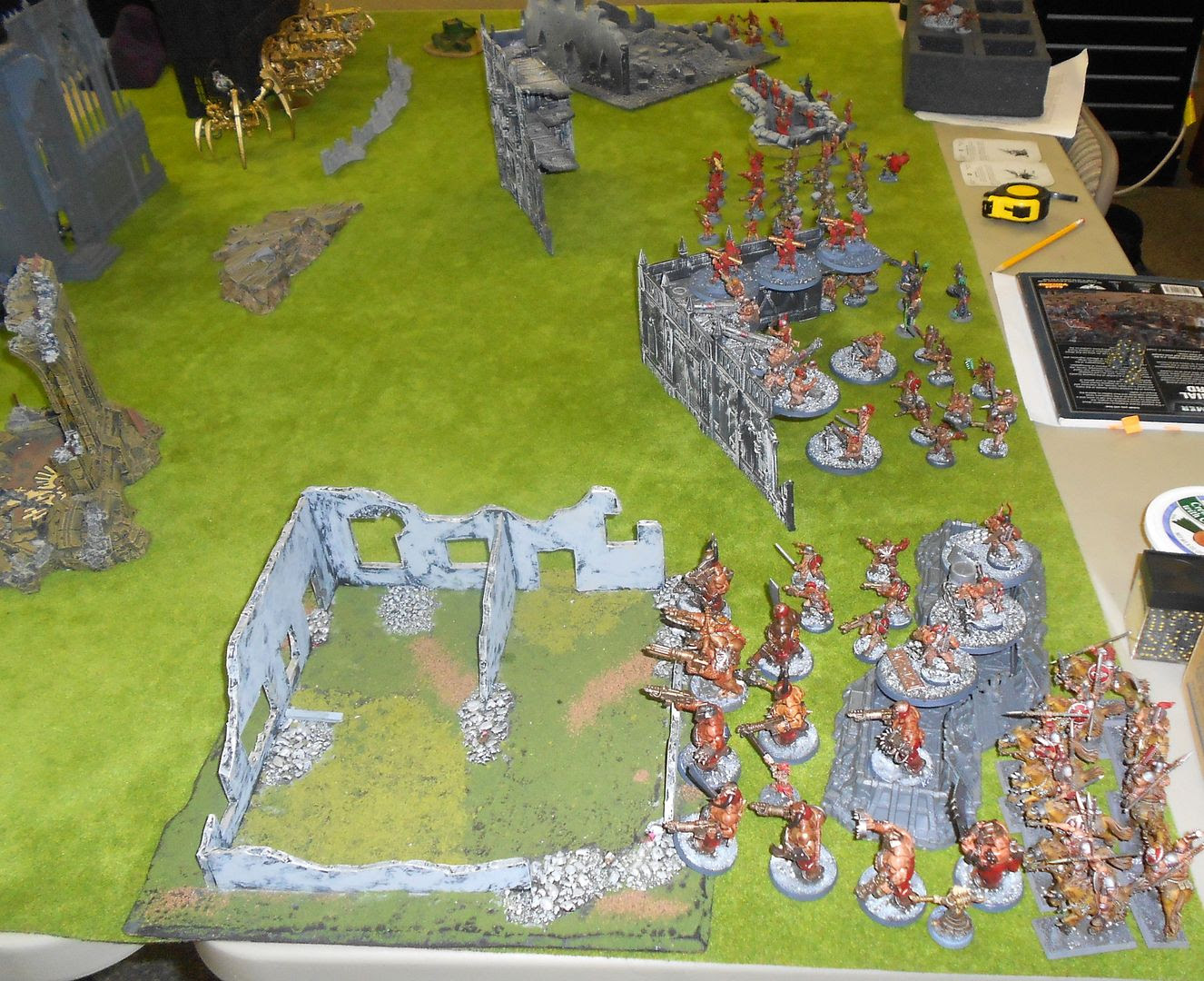 Down at Gaming Underground today, got in a couple of games with the Scythiak Usurpation.  First against Patrick's Necrons at 1850, one objective each, with 50 warriors, a bunch of AV13 skimmers and some other stuff.

The highlight for me was getting the powers I wanted for the Primaris Psyker, namely Endurance and...whatever that Telepathy one is that makes your guys Fearless.  Great options for the Ogryn mob, who led the advance on my left, while other units scampered up to occupy the annihilation barges.

So we've gotten past a fried hard drive and a vacation - I'm home, computer is repaired, new pictures loaded up and here we go!  More Eldar Corsairs for your viewing pleasure.  Above are some Kabalite Warriors in old-school outfits, ready to unleash a ton of poison shots.
Read more »
Posted by sonsoftaurus at 4:32 PM 7 comments:

My computer is fried, so my ability to get pics up is a bit limited at the moment, apologies.  I'm sure there are ways, but hopefully it will get fixed soon enough that I will not have to fool with figuring it out.

I have had time to get work in on the Void Phantoms, both assembly and painting.  I stuck with the basics from the test model, with green added for hair, gems and the like, and white robes for seers.

I am pretty far along with 20 kabalite warriors, duke sliscus, ten rangers, autarch, farseer, warlock, and have warwalkers and bikers assembled.

Posted by sonsoftaurus at 6:09 PM 2 comments: 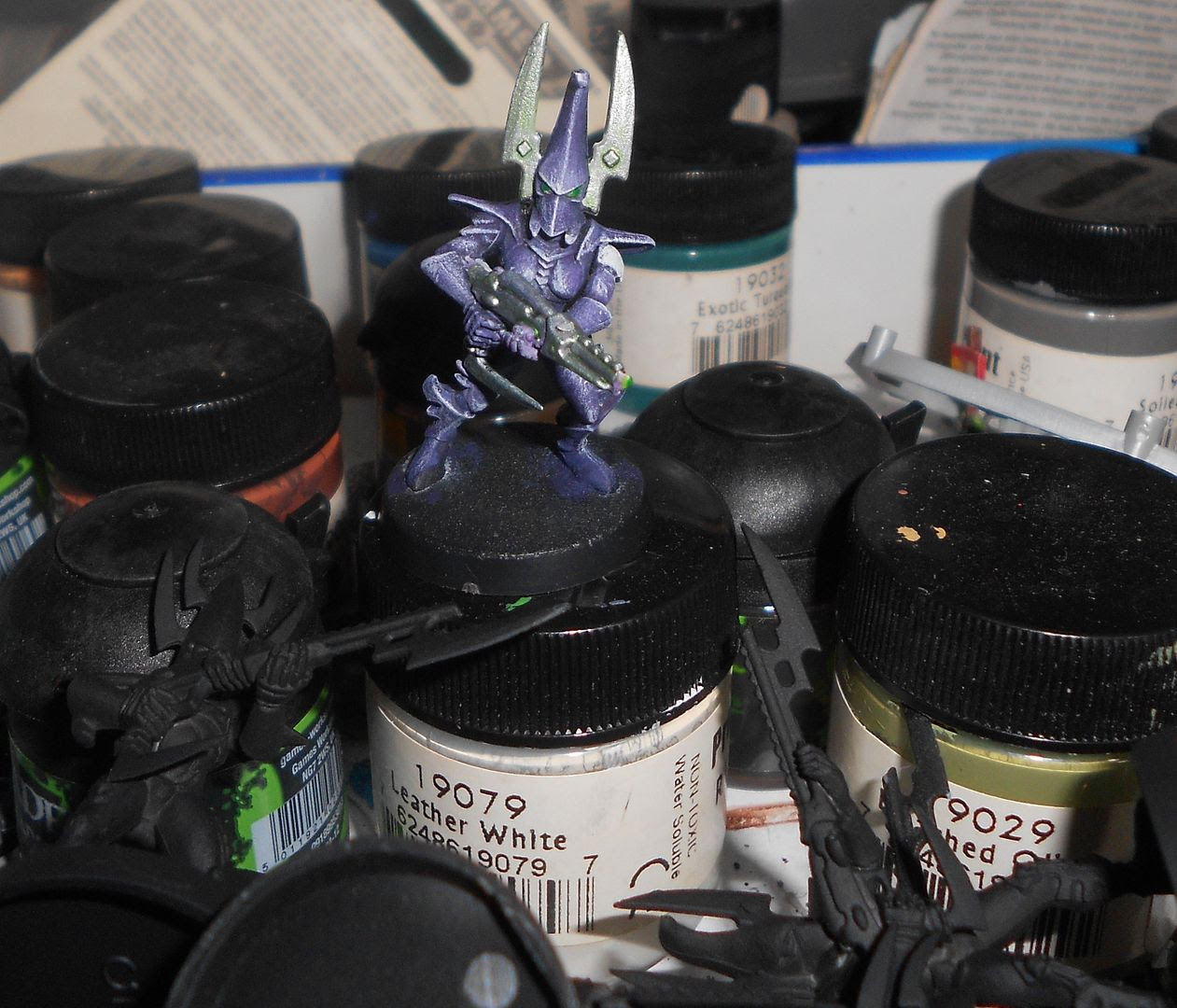 I should really probably start with some actual Eldar units, but I had some of these old 3rd ed plastic DE warriors already assembled so thought I'd try things out with them first.

Planning on a mostly Guardian/Warrior type force, with infantry, warwalkers, bikes, rangers, flyers, support weapons and some small aspect warrior squads.  Also have a ton of harlies I'd like to use and may try to fit in to lists from time to time.

Posted by sonsoftaurus at 6:48 PM 3 comments:


I had some free time this Sunday afternoon and headed down to Gaming Underground, Space Sharks in tow in case someone wanted a game.  As fate would have it, as I turned up Patrick and Landon were finishing a game, and Patrick was up for another.  We left the terrain as it was, he kept his list and I added some Terminators to mine to come to 1850.

The recent Robotech Kickstarter helped get my Battletech fires burning again, so I dug out some 'mech figures and gave them a quick makeover.  Up first is a Fire Lance, designed to pound the enemy at range, with two Archers, an orange Crusader variant and a Rifleman.

Next a lance to close in and finish the job - two Battlemasters, a Hunchback and a Phoenix Hawk, done up as the Steel Tiger, the 'mech of my character in our last Mechwarrior campaign.

Aside from the Kickstarter figs which will arrive sometime next year I have a set of the original unseen figures coming, so more pics are likely forthcoming in the next few weeks.  Hopefully at some point we'll get some more Battletech/Mechwarrior going on. 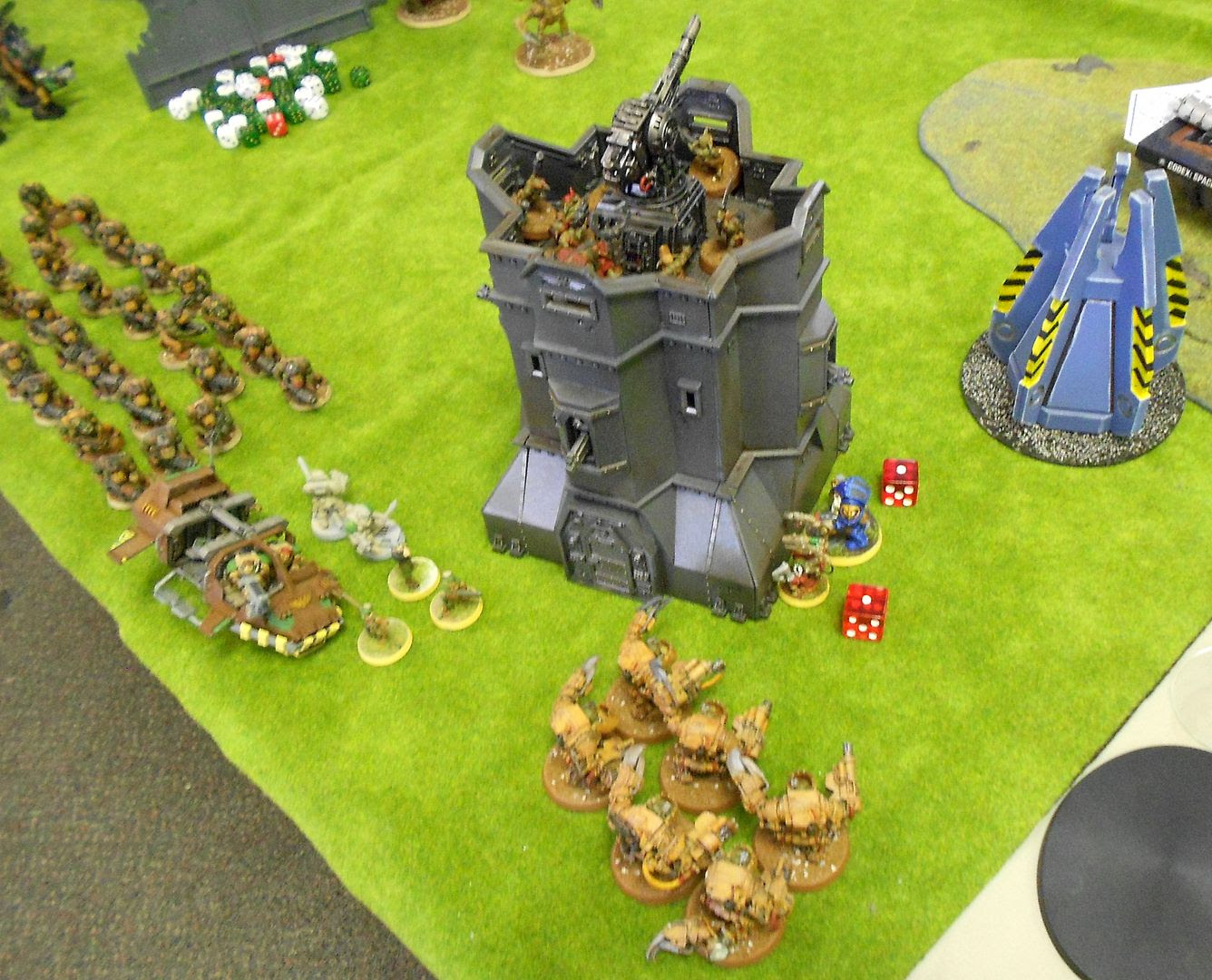 It's been a while since the games, so I don't really want to do full reports, but will share some pictures.  The Orks lost a lot, partly due to mistakes on my part, partly due to problems dealing with various units.

I did have some fun with the Shokk Attack Gun.  My previous hesitancy to use it mainly revolved around the  Mek's vulnerability, but by sticking him inside a bastion he couldn't be picked out and could fire without much problem.

Read more »
Posted by sonsoftaurus at 11:36 AM No comments: