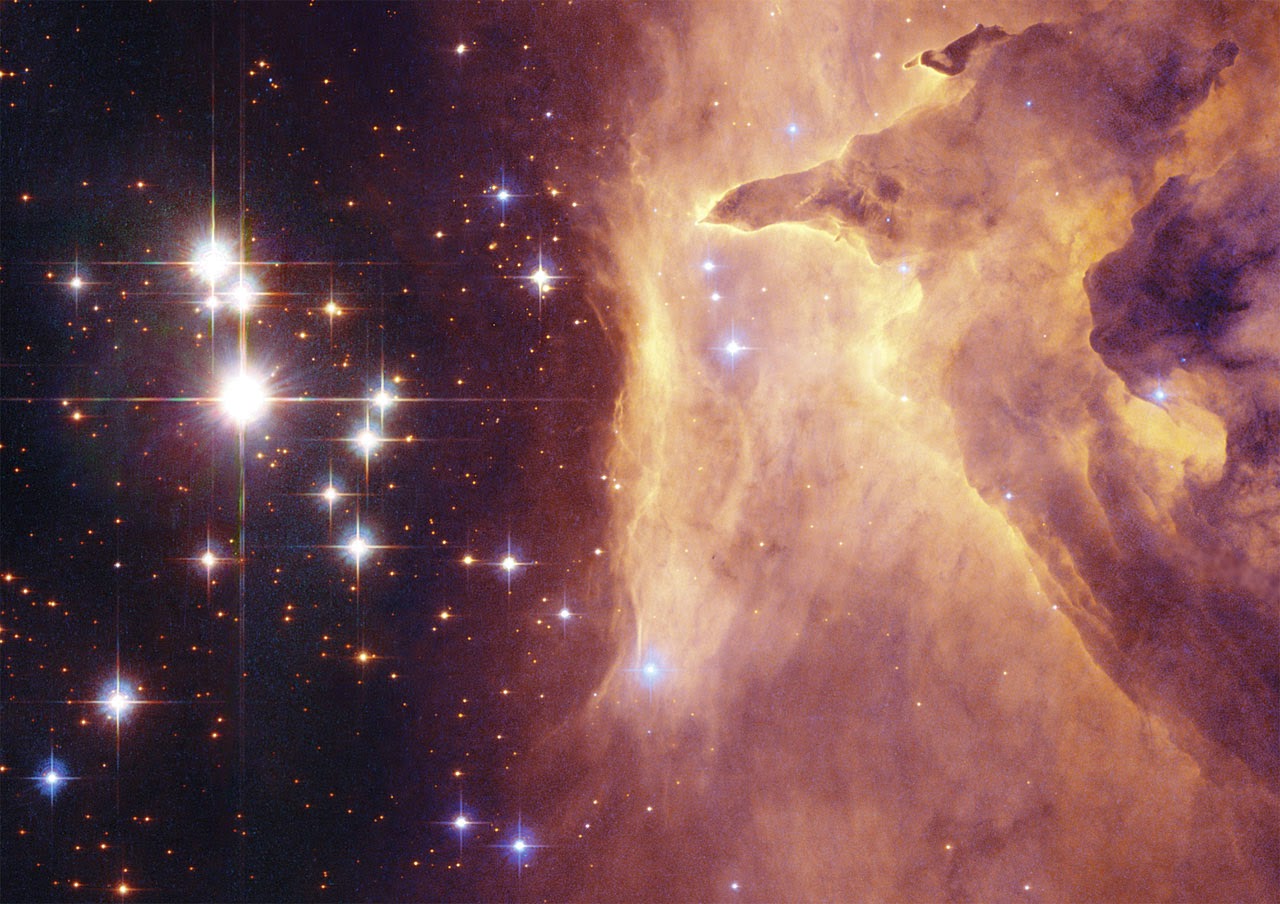 AS YOU ARE DOUBTLESS AWARE, THE TRIAD CLUSTER HAS LONG BEEN A SCENE OF CONFLICT WITH VARIOUS XENO RACES, NOTABLY ORKS AND ELDAR.  FOR SOME TIME THE CONFLICTS HAD REACHED A ROUGH EQUILIBRIUM.

RECENTLY HOWEVER A SERIES OF EVENTS HAVE DISRUPTED THAT EQUILIBRIUM.

HERETICAL INFLUENCE AND WARP INSTABILITY HAVE BOTH BEEN ON THE RISE.  IT IS UNCLEAR IF THERE IS A DIRECT CONNECTION AND IF SO WHICH GAVE RISE TO THE OTHER.  THIS INSTABILITY IN THE WARP HAS APPARENTLY ALSO SERVED AS A BEACON TO OTHER MALIGNANT FORCES – AN INFLUX OF ORKS IS GIVING RISE TO A NEW “WAAGH”, A TYRANID HIVE FLEET IS ENCROACHING ON THE CLUSTER FROM THE GALACTIC EAST, AND MONITORING STATIONS NEAR LONG-DORMANT NECRON TOMB WORLDS ARE REPORTING INCREASED ACTIVITY.  ALSO OF NOTE IS A TAU EXPLORATOR FORCE THAT HAS BEEN OBSERVED MAKING COMMON CAUSE WITH THE ELDAR ON SEVERAL OCCAISIONS.

ALL IS NOT DARK HOWEVER MY LORDS.  WE HAVE MANY ENEMIES BUT THEY ARE DIVIDED WHILE WE STAND UNITED WITH THE FULL IMPERIUM BEHIND US.  EVEN NOW, FORCES FROM SEVERAL SPACE MARINE CHAPTERS HAVE ANSWERED OUR CALLS AND HAVE BEGUN TO DEPLOY – THE DARK ANGELS, SPACE WOLVES, AND FLESH TEARERS WILL SOON BE ENGAGING OUR FOES.  WE HAVE ALSO BEEN RECEIVING ASSISTANCE FROM THE ADEPTUS SORORITAS IN DEFENSE OF THREATENED SHRINE WORLDS AND IN PURGING HERETICAL AND GENESTEALER CULTS.

++ FAITH IS MY SHIELD ++
In a few weeks we'll be starting up a semi-narrative 40K campaign.  At the moment we have sixteen players (currently grouped into teams as follows):

40K Campaign
Players will be split into different factions (Imperial, Chaos, etc) and play against other factions for control over the sector.  Each victory will get your faction closer to victory.  How many points each faction starts with and how many are needed for victory will be finalized when we finalize factions.

Unit advancement
*Units can earn Glory Points (GP) by doing well and performing great deeds.  With enough Glory they can earn upgrades.  Warlords, Independent Characters, unique units, Super Heavy Vehicles, Gargantuan Monstrous Creatures, units destined for destruction such as Spore Mines and Lone Wolves and other units determined by campaign/organizer are not eligible for Glory Points.  Other units including vehicles and Monstrous Creatures can earn them and will have several tables to choose from.
*Units must remain the same to continue to accumulate Glory Points.  Especially once units start to earn points it will help to name them to help make tracking easier.  You can leave a unit out of a battle to fit in something else if desired, just keep track of their points for when they return. (Example: my Whirlwind earns two Glory Points.  I name it “Chum Bucket”.  Next battle I leave it out of my list.  When “Chum Bucket” returns, with the same build, it can add to the two Glory Points it already earned.)
*You will need a way to accurately track your units’ Glory Points and upgrades.  An index card for each unit noting the name, build and any upgrades on one side and what it has earned points for on the other, or a notebook with a separate page for each unit are two options.
Glory Points
+1GP Fully painted (earn once)
+1GP Destroyed 2+ enemy units and survived battle
+1GP Hold objective or the Relic at end of game (one unit only per army per battle)
+1GP Destroyed enemy Legendary Unit
-1GP Destroyed friendly unit (blast scatters, exploding vehicle, kill self with Gets Hot!, etc.)
+1GP Victory! If win game, +1GP to Legendary Unit if alive & was in battle.  If Legendary Unit is dead or was not in the game, assign point to a surviving unit.
Legendary Units
*This unit is among the most famous to emerge from the campaign, great heroes or villains, lauded by their allies and feared by their enemies.  Same restrictions for Glory Points – if a unit is not eligible for Glory Points it cannot be your Legendary Unit.  Your Legendary Unit must be from your Primary Detachment.
*Nominate an eligible unit.  A Legendary Unit must be painted and be clearly the unit represented – it would not do for the unit of heroes to be proxied bare plastic!  Unit must remain the same – if it starts out as ten marines with a meltagun and a sgt with plasma pistol and power fist, it has to be the same build to count as your Legendary Unit.  Different transport options are acceptable.  As with any unit earning Glory Points, it should be named, to help track points and to allow your opponents to curse it more accurately.
*A Legendary Unit starts with one upgrade.
*Legendary Units all have Objective Secured.  A Legendary Unit that would already have Objective Secured (such as a Troops unit in a Combined Arms Detachment) has Objective Really Secured, which trumps regular Objective Secured.

Building armies
For the first month of games, armies will be built to 1500pts.
For the second month, 1750pts.
For the third month, 2000pts.
Armies should be “bound” armies.  Regular combined arms detachments, alternative detachments, allies, dataslates, lords of war, Forge World units and army lists are available.  Operate on the primary rule of “don’t be a jerk” – if bringing something very unusual or powerful such as a super heavy, be sure to give your opponent advance notice.  Bring any rules you intend to use for your opponent to look over as desired, and give explanations as needed.
Each game play someone from a different faction.  Try to play as many different players as is practical, and preference should be given to players who have yet to play each other.  Most games will likely be one-on-one, but team games with one faction vs. another are acceptable.

Optional Terrain Generator
1 – Natural features
2 – Battlezone
3 – City Fight
4-6 Standard/Mix
Natural Features – focus on woods, hills and other natural terrain types.
On a further roll of a 1, the battle takes place on a death world and all terrain features count as Dangerous Terrain, host to all sorts of dangerous flora and fauna.
Battlezone – focus on trenches, fortifications, craters and the like.
On a further roll of a 1, automated defenses and minefields are still active.  Any unit that has a model that moves over 6” in a single phase may trigger the defenses.  On a roll of a 1, models in the unit that moved over 6” must take Dangerous Terrain tests at the end of their move.
City Fight – focus on ruins and buildings, and lots of them.
Any ruin hit by a blast or large blast of S8 or higher has its cover save reduced by one after the attack is resolved.  If reduced to worse than 6+, the ruin collapses.
Any unit in the ruin at the time it collapses takes a S6 AP- hit for every model in the affected unit, allocated by the controlling player.  Vehicles are hit on the rear armor.
After any damage is resolved, remove the ruin and mark the outline.  Replace surviving models in their approximate prior positions.  The former ruin is now scattered rubble with a towering column of smoke and dust.  The area is difficult terrain that completely blocks line of sight past 3” but provides no cover.
Alternatively (or in addition) if players agree they can use extra rules/stratagems from rules like Cities of Death.

Combat Squads – If a unit with upgrades splits, each part keeps any previously earned upgrades.  For purposes of earning new Glory Points in that battle, only track for the part of the squad that contained the sergeant.

Independent Characters – Independent characters that are attached to a unit with an upgrade only get the upgrade if the rules specify.  Example – Fearless would confer to the IC, but +1 T would not.
Actions solely by the IC will not count for the unit earning Glory.  Examples – character destroys unit with psychic power or in a challenge.
Actions in concert with the unit will count.  Examples – unit shooting at enemy, character contributes to fire, or unit and character both participate in assault, OK to count.
If in doubt, consider if character is acting on its own or as part of the unit.

Posted by sonsoftaurus at 9:36 PM