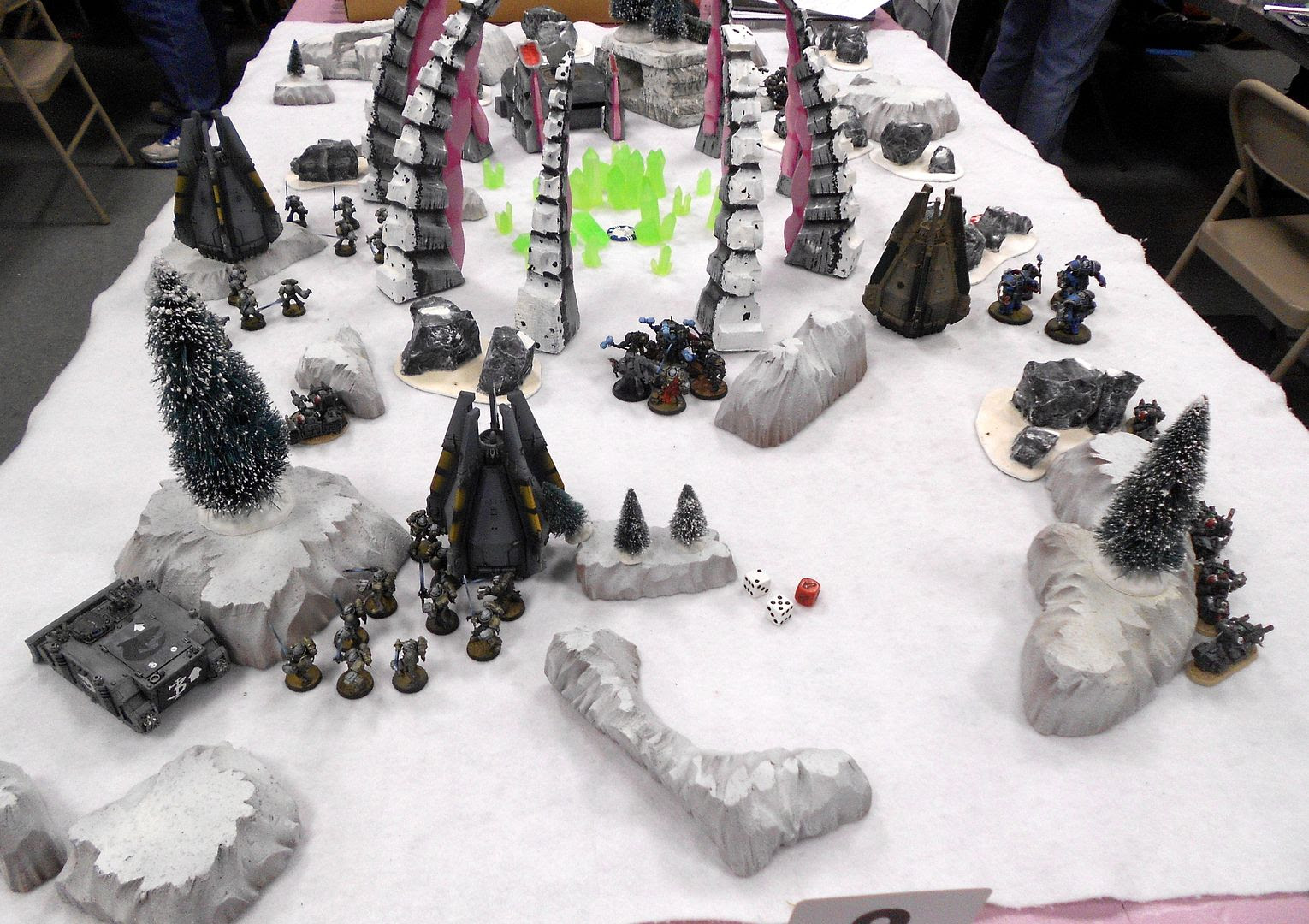 (Part one can be found HERE)
Round one I was on the snow table with the Grey Knights/Space Wolves/Space Marine/Inquisition army, bunch of purifiers, squad of TH terminators, squad of centurions, bunch of psykers with various gimmicks, some mandatory chaff squads of blood claws and scouts.  Space Wolf pods turned over to the Grey Knights and the marine centurions.  I set up with the terminators delayed until turn two, hoping to have his guys committed then deploy termies away from the big threats and clear up his chaff, or be able to use the teleport homers on the bikes to all come in and deal with the threats one at a time.  They took out the attack bike and shot up the other on-field guys a bit. 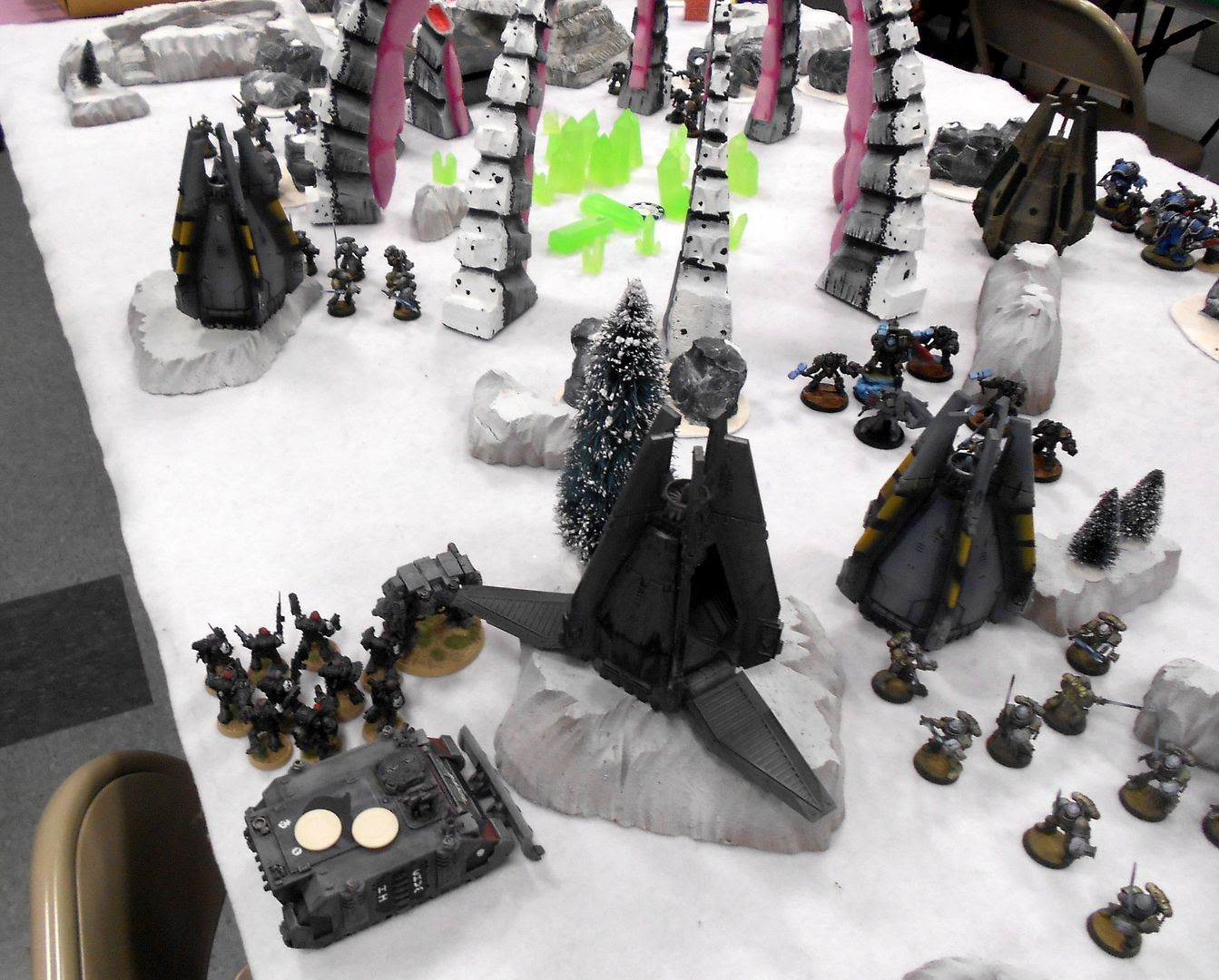 Tac squad and dread take out a combat squad of purifiers and try to lure the TH termies over to the edge. Bikers manage to get up and engage the centurions.  I hope to have them survive long enough to bring all the termies in right there and be able to PF the centurions away before grav cannons can really come into play, but the bikers blow their saves and end up dying right before the termies arrive. 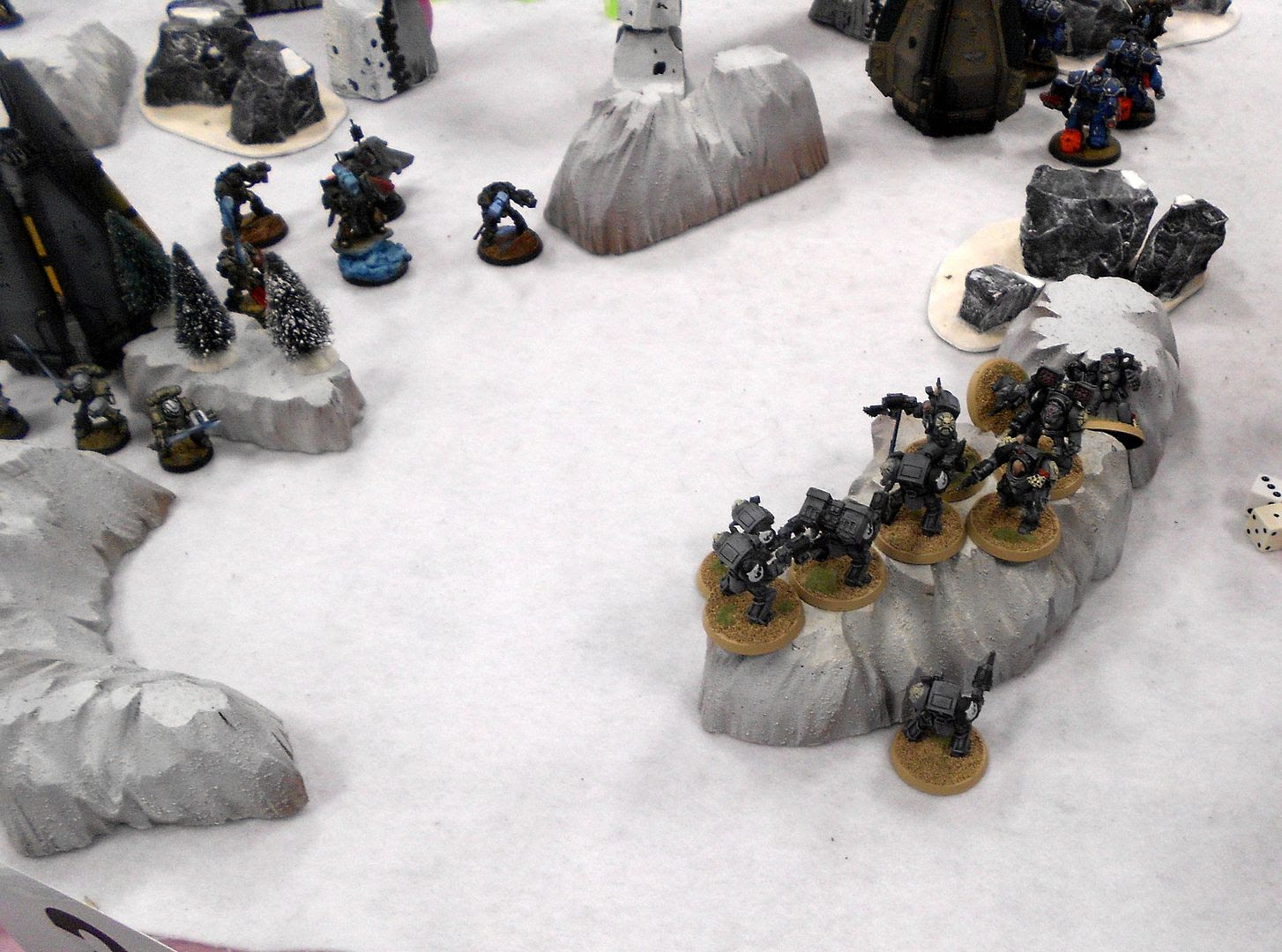 Bereft of homers on a cluttered field, two squads mishap and are placed up here by my opponent.  I do some damage but grav, vortex, and a plethora of rending hits courtesy of multiple Misfortunes tore me up.  Victory to the seven-layer dip army. 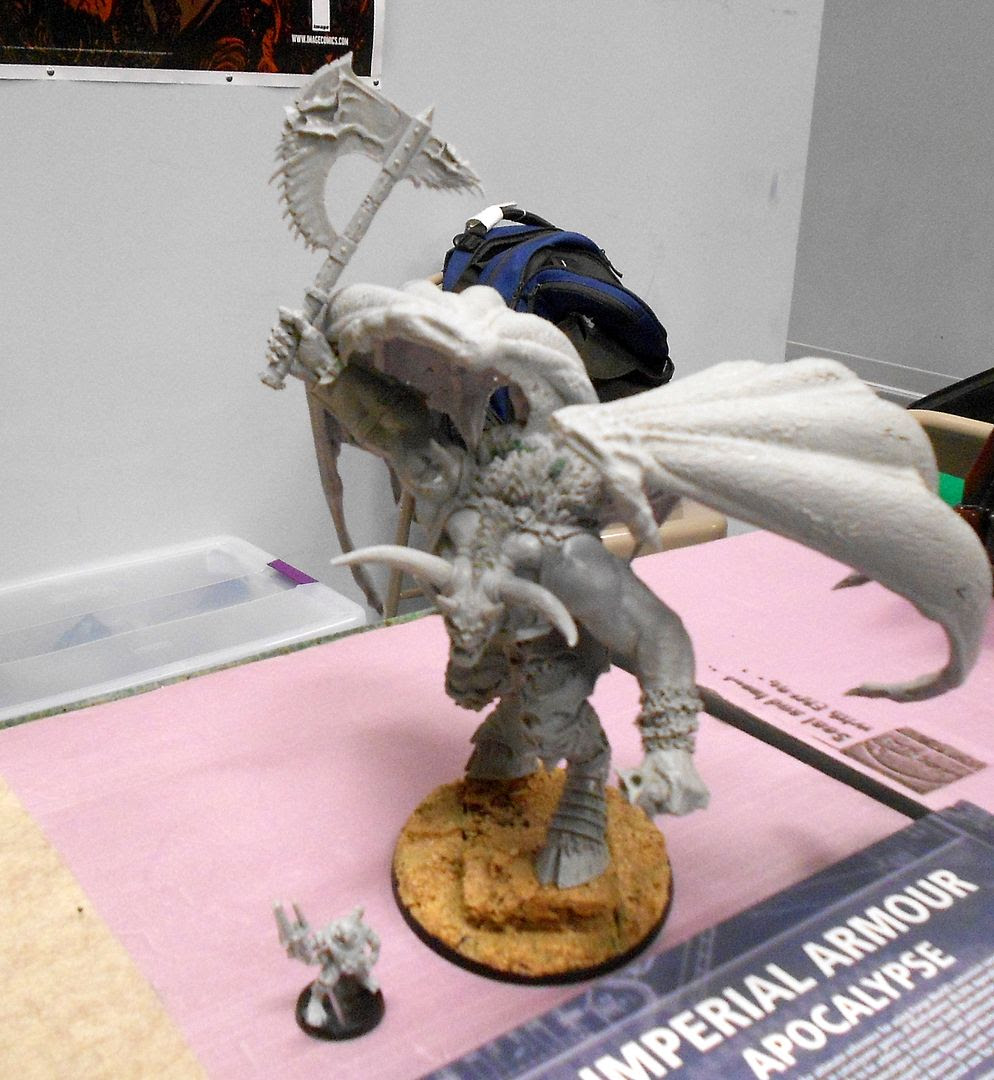 Round two I was up against Space Wolves/Daemons, featuring this charming fellow's 888 points, a big squad of thunderwolves and thunderwolf characters and some chaff.  Fortunately the mission required Mr. Big to start in reserve, giving me some breathing room. I teleported in turn one, mostly using bike teleport homers though one squad scattered off into the rocks on the right.  We stayed away from the wolves and poured fire into them, whittling the unit down. 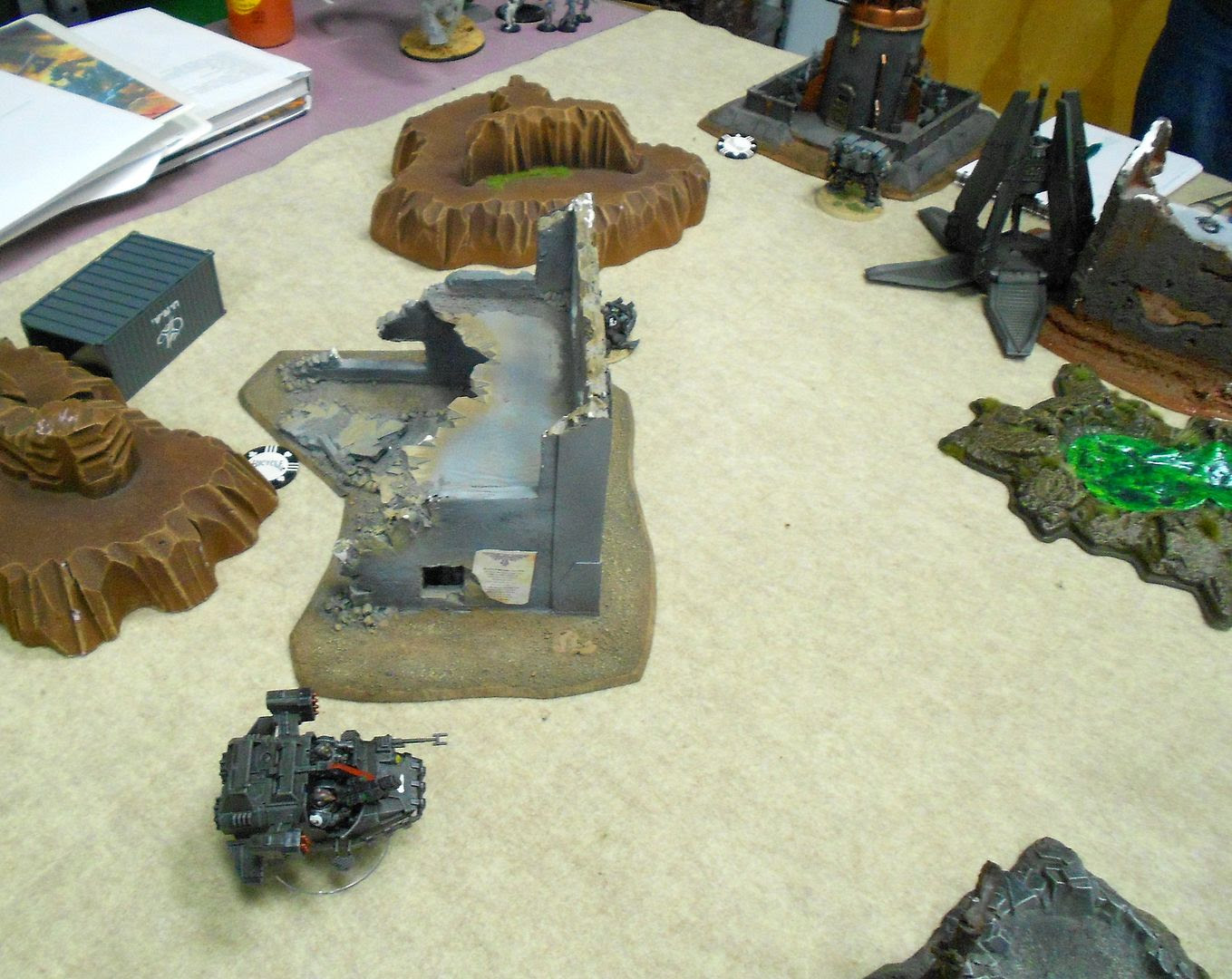 Speeder helps shoot at wolves, while attack bike and dreadnought tackle some daemonettes.  Dread would end up in a slap fight with them until near the very end of the game. Much reduced TW unit comes around the corner. Mr. Big flies on, clipping the dread with a vector strike but not killing it and whipping a point off of the speeder. Wolves fail a charge. Tacticals arrive and add their firepower against the wolves.  The tacticals have their aim thrown off by my dropping my rather heavy tape measure right on them, but come through with only a bolter knocked off one hand.  Hurrah for power armor! 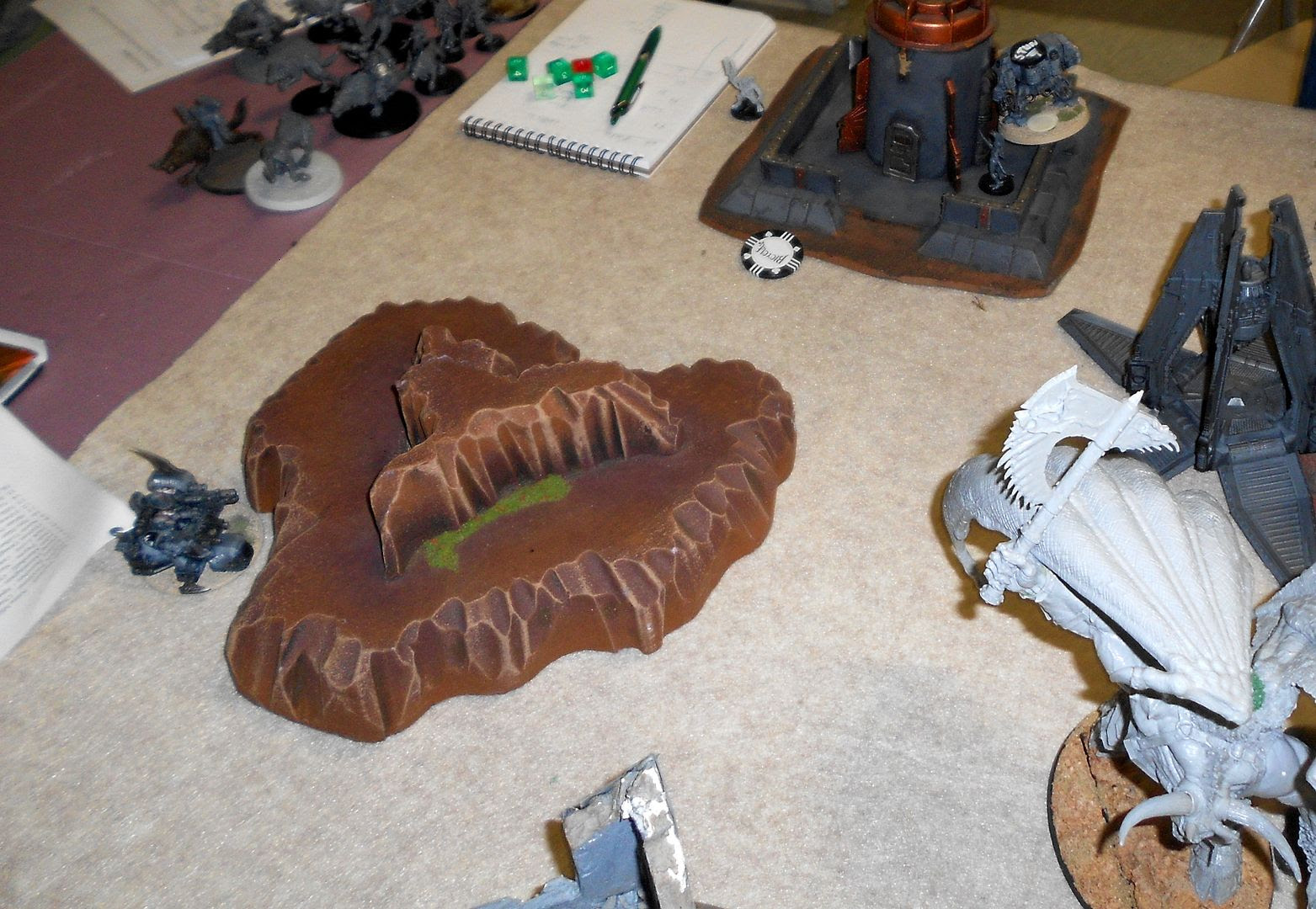 Attack bike gets the heck away from Mr. Big while dread fights little daemons. 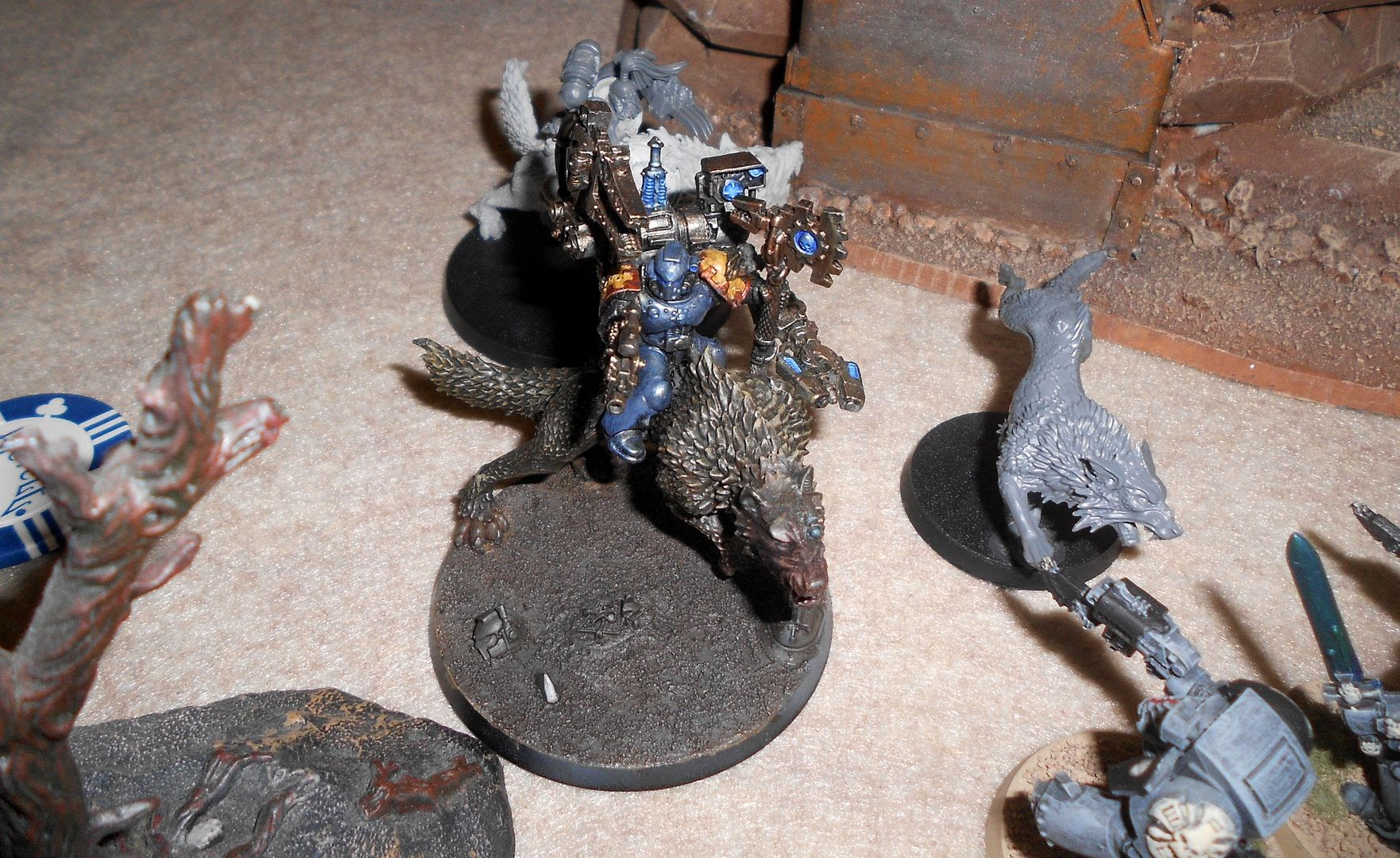 Close up of cool Iron Priest on wolf.  I wonder how much time Iron Priests have to spend picking hair out of sensitive equipment. 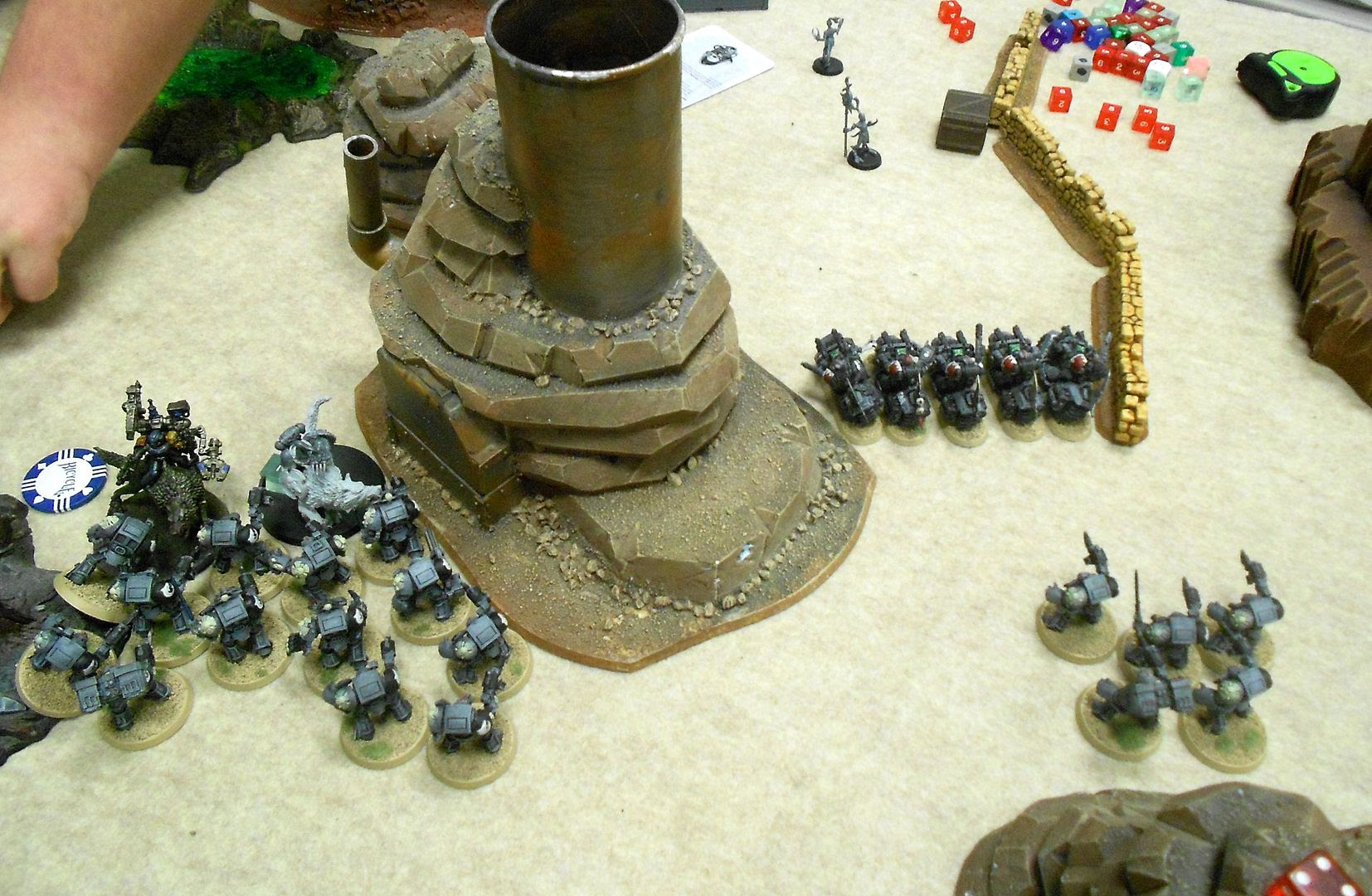 Shoot up other daemon squad while mass of fists take down wolves.

And then Mr. Big comes and smashes all the terminators with his 8+d6+whatever attacks each round.  I managed to put three wounds on him early from lucky shooting, but never got a wound on him in combat.  Tac squad cowers in rhino by objective. 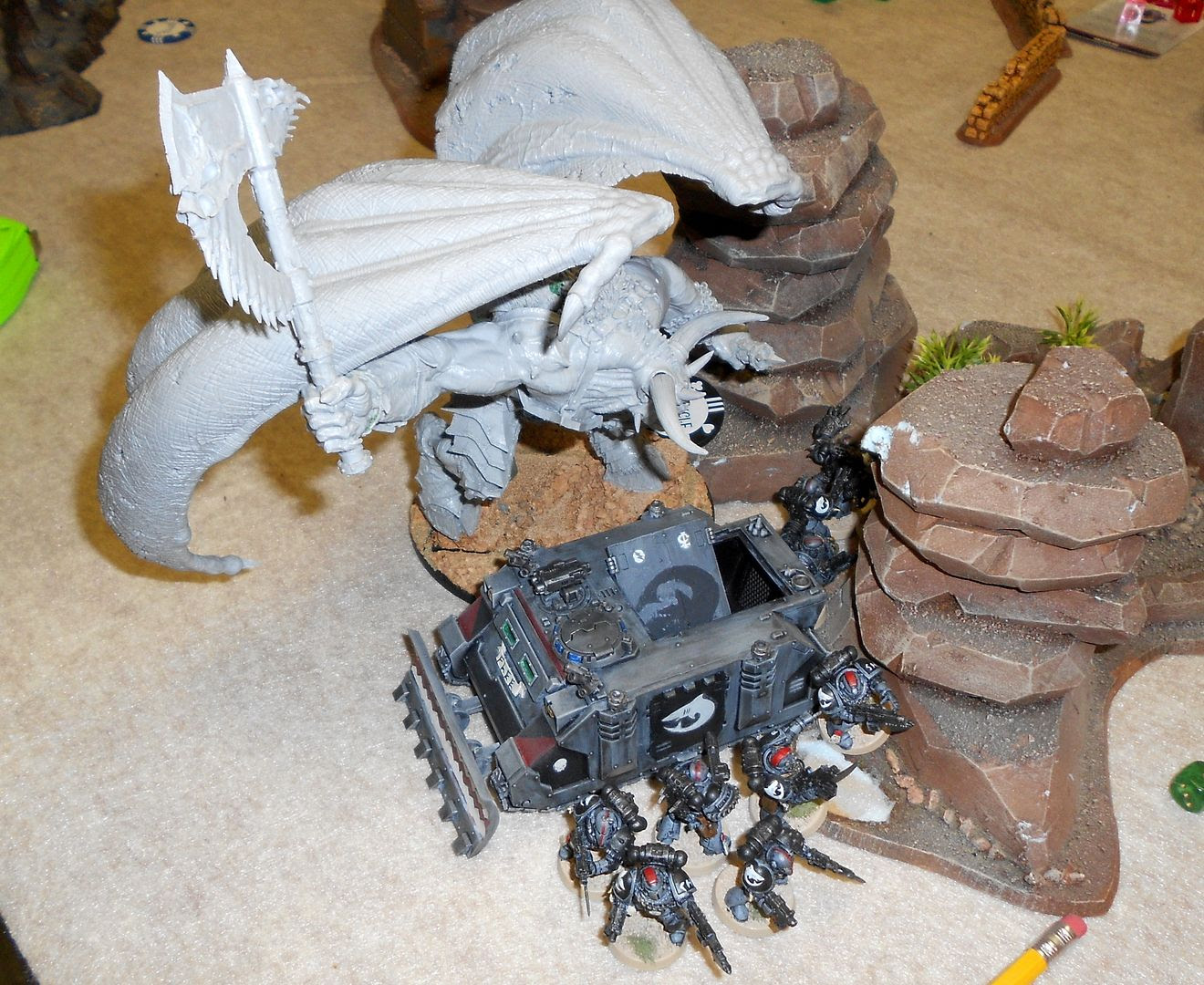 Mr. Big wrecks the rhino, but objective secured survivors still score the objective at the end.  I lose all my terminators but end up winning the game, just too many mobile units able to cover objectives while Mr. Big could only be at one place at a time. Round three on an urban board against Doug's Sisters of Battle.  Doug is a local player I recently met who will be in our upcoming campaign.  Note Hab Block 1138, cute THX-1138 easter egg.

I set up with just the speeder on the table, everything else in reserve. Dread drops in and multi-meltas an Exorcist off the table.  Unfortunately, that still leaves two, one right in front of him. Some of Doug's motor pool. 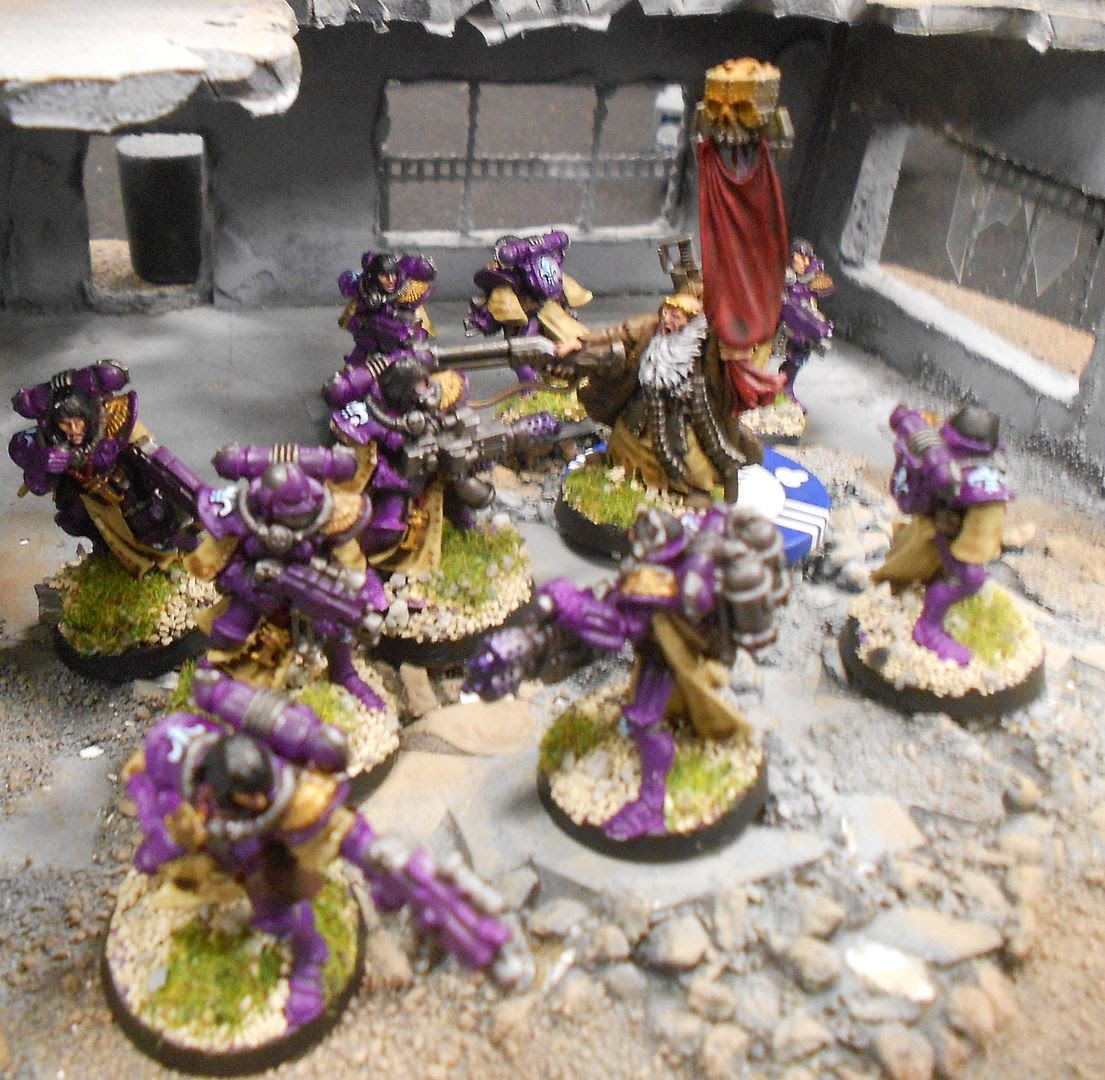 Sisters and super-priest in ruins. 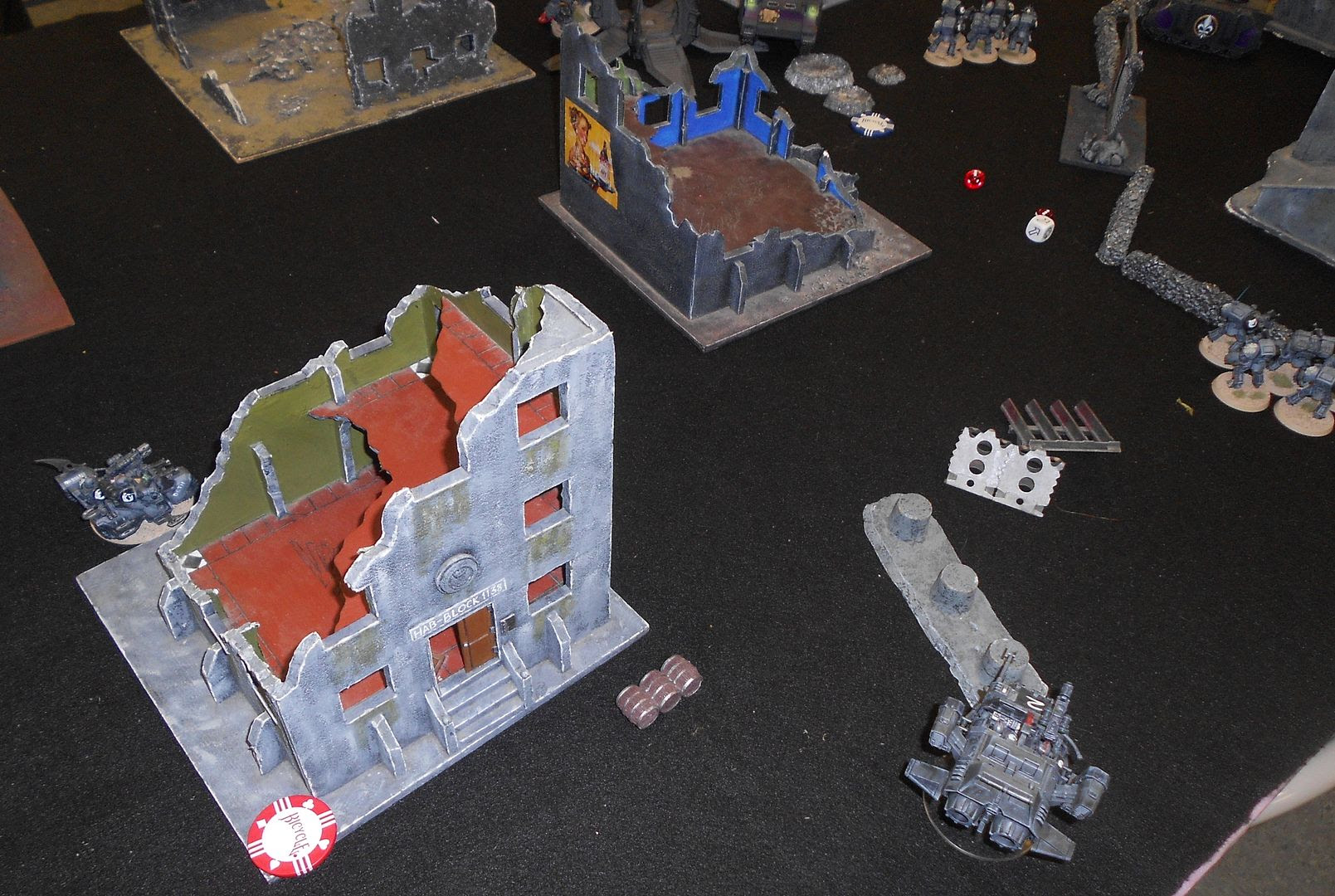 Termies arrive and sharks move out to take shots. 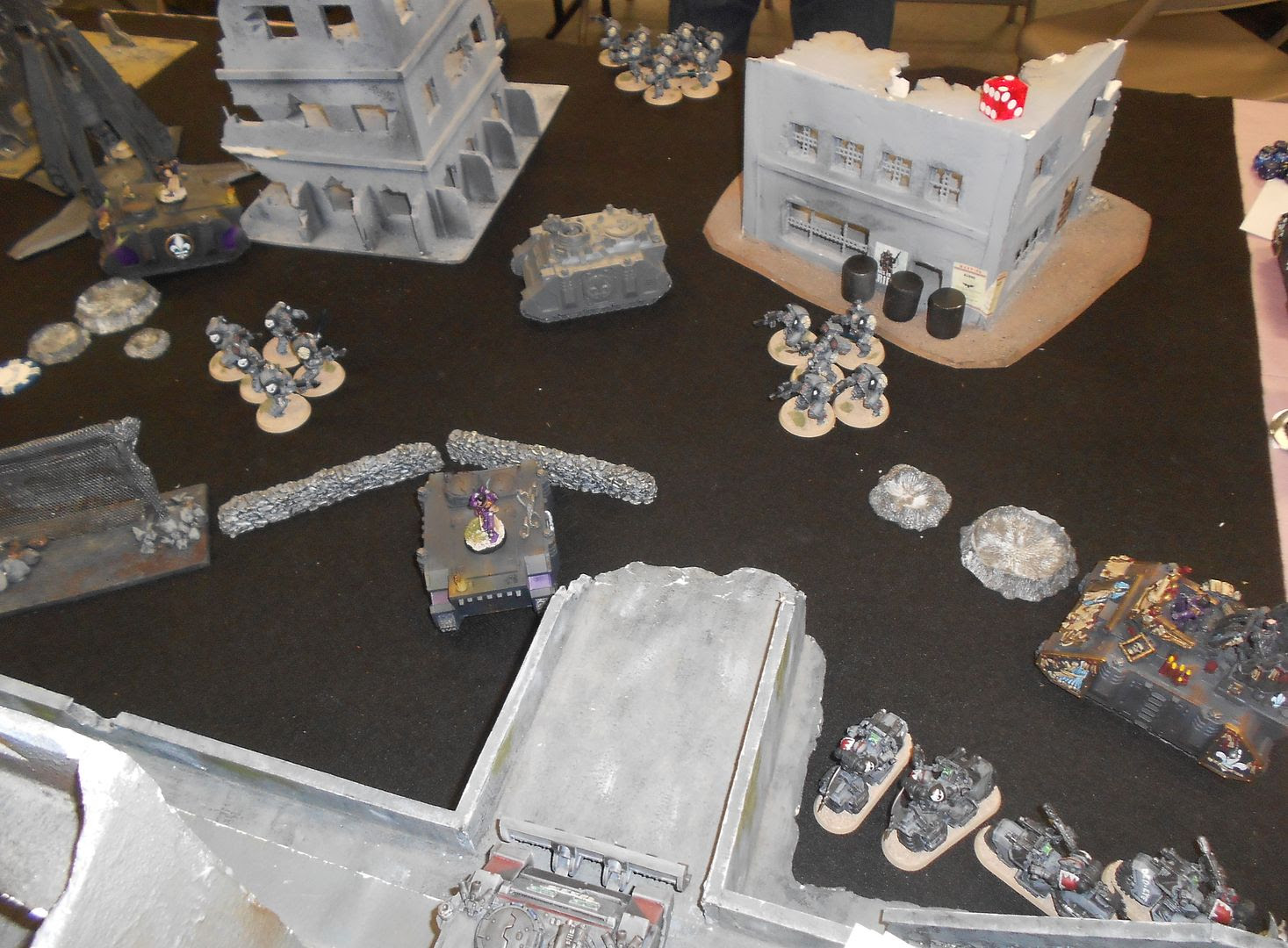 Chaos.  My dread is immobilized, but the exorcists get shaken or stunned, easing up on the firepower headed my way. 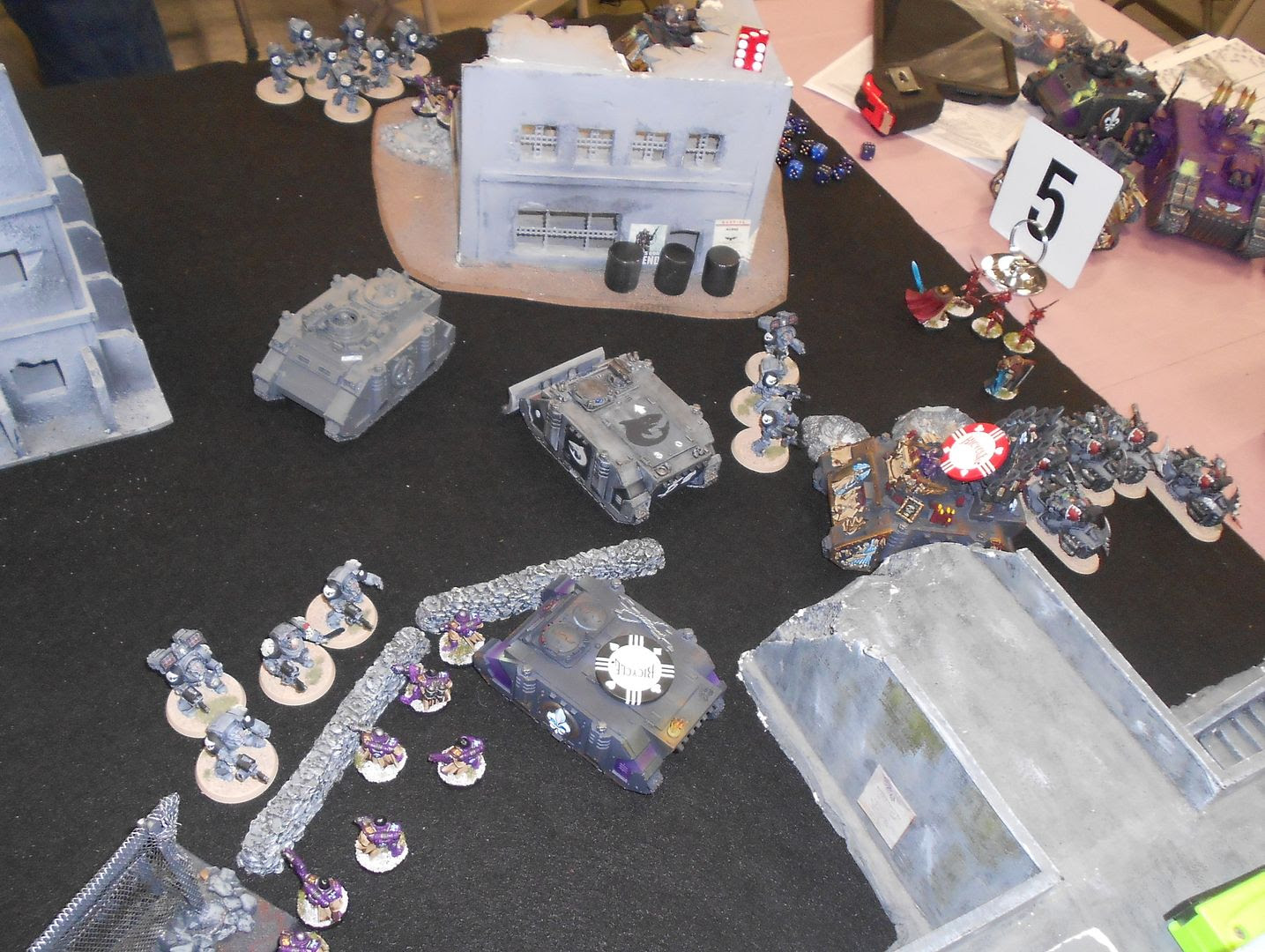 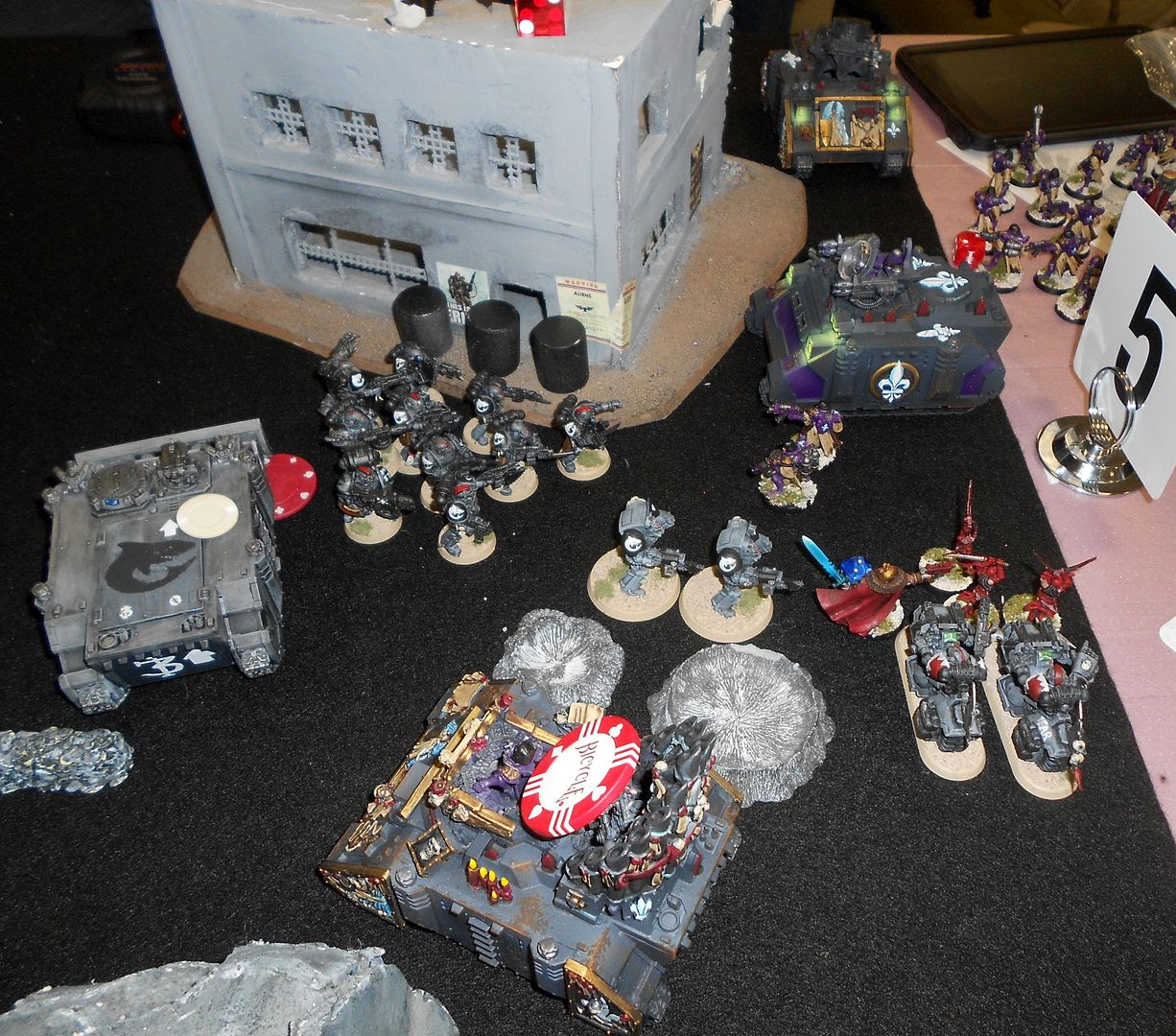 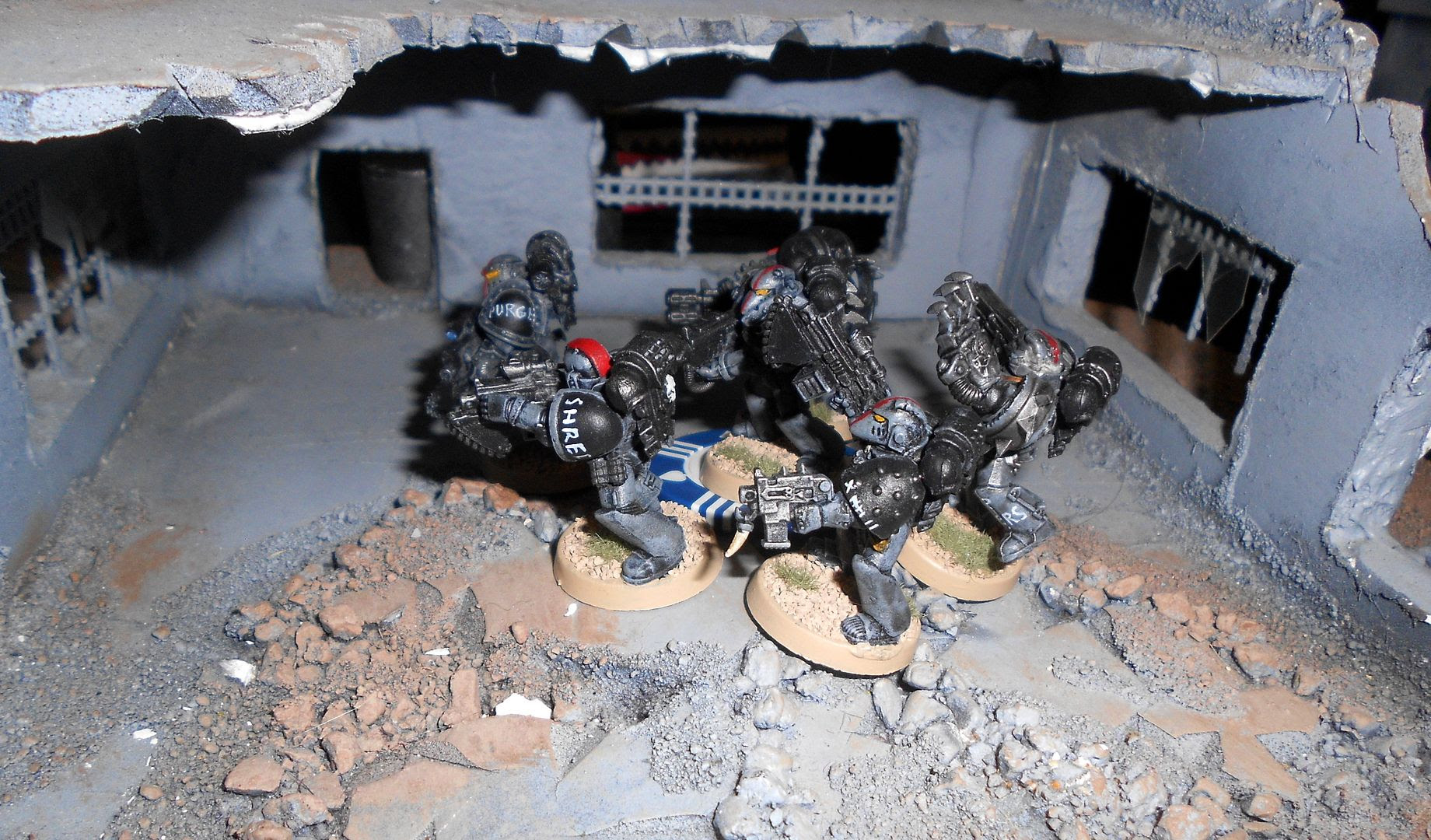 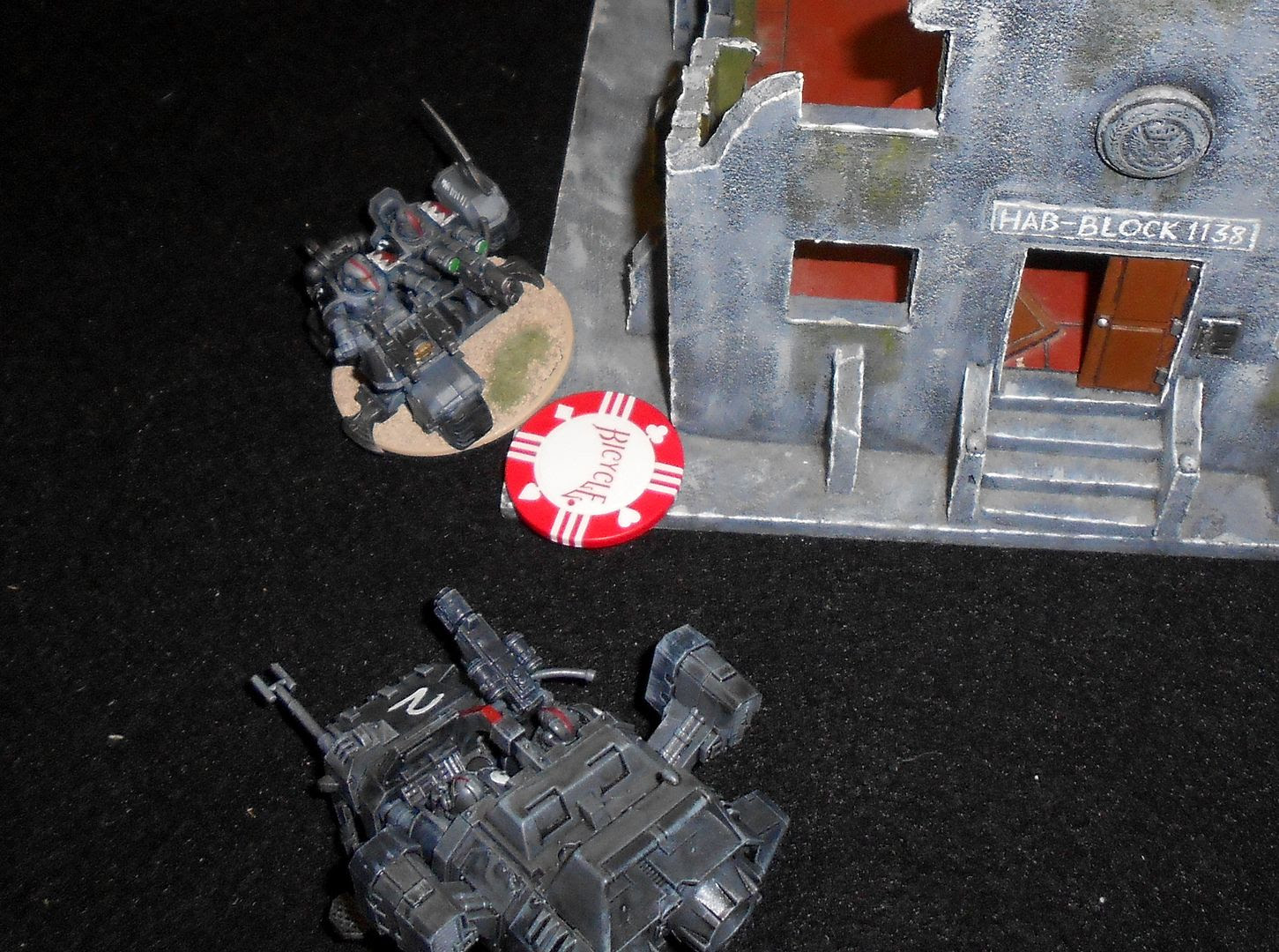 On my end, speeder destroyed but attack bike managed to defeat sisters squad over several turns, securing my own objective.  In the middle, terminators cleared out other sisters to secure middle objective, leading to a Shark victory.

Overall had a good time, lots of good folks and a great store.  If you're ever in the area definitely worth stopping in!  I know I'll be back!
Posted by sonsoftaurus at 10:46 AM