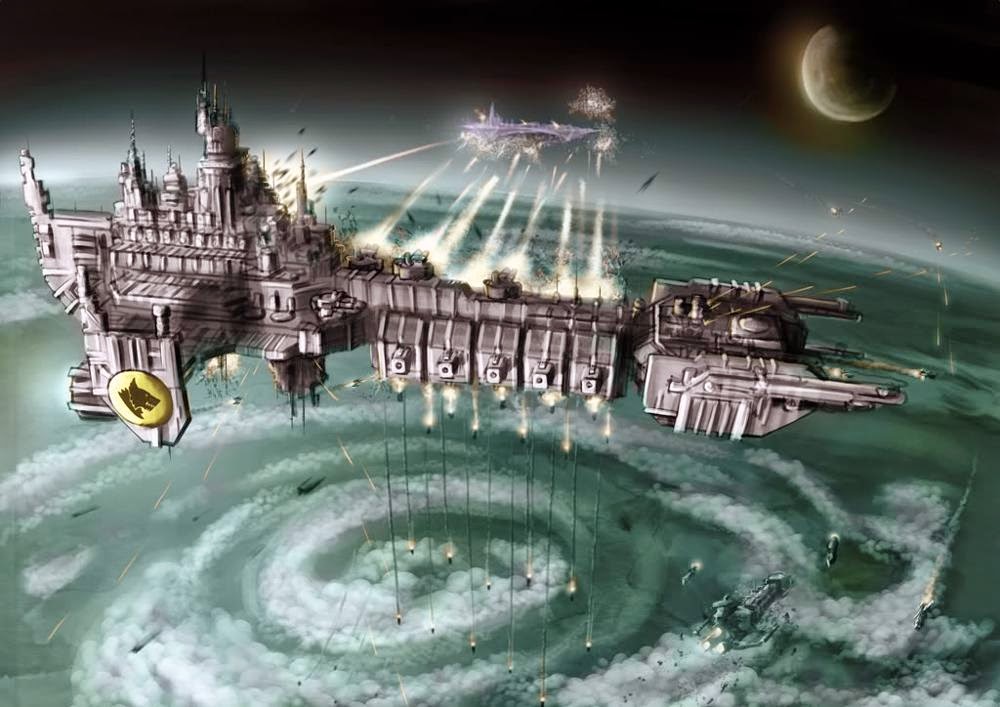 Some tidbits as we get closer to starting the Triad Cluster campaign:

As the transmission ended Lord Tyr turned to his helmsman, "Set coordinates and prepare for jump"………..

The fleet came out of warp, screaming and tearing at the very fabric of reality. The jump had brought them in close to the planet, a calculated risk given the circumstances but one the crew had performed many times. The feel of real space suddenly jolting everyonebut there was no time to recover.

“ Enemy ships closing on the starboard side”came the defense operators voice. The gamble had paid off. The battlebargeAsland and strike cruisers Durst's Shield and Ruewyn along with their escortshad managed to jump inside the ring of defenses. Even now thunderhawk gunshipscould be seen pouring out to screen the mission ahead.

The launch bays were a blur of activity. The Vika Fenryka, the sky warriors, warriors of the Emperor’s sixth legion. The SPACE WOLVES. Row upon rowof drop pods could be seen. Each one carrying a package of death, a unit ofgrey hunters with their cunning and patience, bloodclaws impatient to get togrips with the enemy, ancient dreadnaughts wise and experienced awaken fromtheir slumber. All know their role and their part to play. The thrum thrumthrum of the barges guns sounded throughout the bay when every comm linksuddenly cut on. Lord Tyr’s voice came across “ For Russ….For the Wolftime….Attack”And the reconquest began………..

And a little bit about my Orks:

When Blood Axe warbands form, the boss goes around and evaluates his orks.  He finds the biggest, toughest, strongest, meanest, most cunning orks he can.

Those become nobs.  This is not their story.

This is the story of the next rung down.  Not quite nob material but well above the average ork.  These orks are formed into units, equip themselves with the strongest armor they can and load up with all the weapons and stikkbombs they can carry.  They usually then beat up some weaker mob for their ride and embark into battle as full Shokktroopahs!

In the wars of the Triad Sector, the Blood Axe Shokktroopahs named themselves after fearsome warriors they had heard tales of…ded ard fighters that stopped even the mighty Ghazkgull Thraka cold.  Thus the Steel Leejun took to the field!


Some of the Legendary Units that will be taking the field:

The Outcast of Vior'La - Riptide

The Chosen of the Prioress, aka "Bolt .45" - Ten battle sisters ready to roast with flamer and heavy flamer.