We can survive bolters and flamers half the time!

But just to be sure, push the weedier gits up front.

I experimented with some different basing, giving the newish GW Agrellan Earth stuff a try.  Painted the base, put the Agrellan Earth on, after it dried drybrush, washed and drybrushed again, added some static grass.  I think it looks OK.  Doesn't look like much from a distance, but closer in you can see the various cracks.  Painting over it was pretty easy, look forward to trying it for some damage/wear to vehicles. 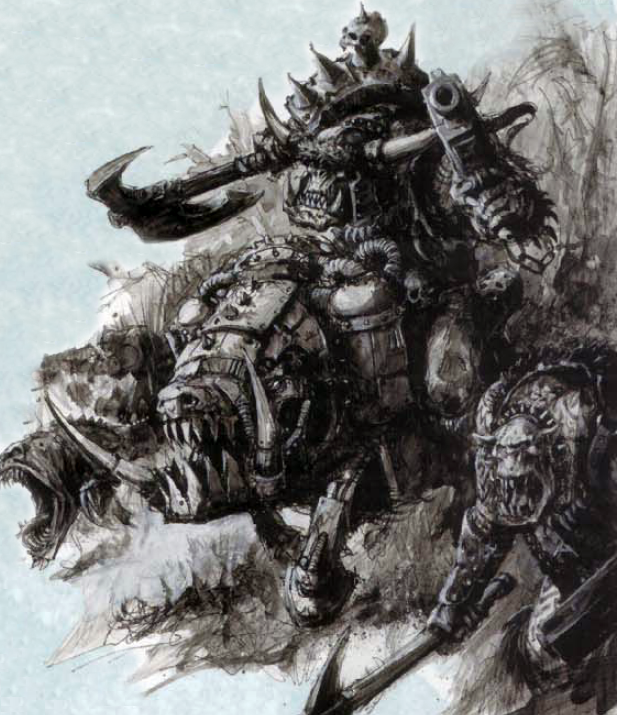 In other campaign news, one of my fellow ork players has nominated his boar boys (count as warbikers) to terrorize the battlefields.  Ten warbikers, nob with klaw/bosspole.  Cyborg boars with laser eyes, what could go wrong?  No firm name yet, but suggestions of The Hawg Wild Riderz and the Sons of Anorky have been floated.

And a story of the Sisters preparing for war:

The remembrancer’s first emotion as he passed under the vaulted archway and into the ship’s cavernous reliquarium was fear – fear that he might fall straight through the expansive transparent floor that stretched before him, and plummet to the surface of the pale blue globe far below. Visible underneath the filigreed glass, the sight of the agri-world and its stunning pastoral calm quelled his vertigo – or maybe it was the wine of the welcoming ceremonies, he thought. Either way, he felt a warmth wash over him as he entered the sacred chamber. The cruiser Faith’s Redoubt was known in the fleet as a design-magus’ dream, and he marveled at how beautiful she must have looked to the observers in the thirty-three other ships of the Convent’s mission as they glanced through their portals and glimpsed her, framed by the blackness and the globe. The thought occurred to him that he’d be an unusual sight were they close enough to spot him on the deck – he was, now that the priests had been dispatched to the planetary capital, the only male aboard any ship in the fleet.

As he pondered, the system’s star began to set brightly behind the smallest of the three continents. “Magnificent…” he whispered, inaudibly, he thought...

“It is.” said a woman’s voice behind
him, and as he turned, startled, her tall presence passed. By insignia a superior in the Order of the Zealous Flame, the woman was not admiring the sunset as expected, but had locked her gaze on a small
boxy object at the far end of the chamber, towards which the ornate decor seemed to be leading. He hesitated, but followed her clinking ceramite steps as a choir far-off in a high pulpit beside them began a song. She continued to speak as they walked without ever looking his way.

In large strides they walked, and soon reached the box, a gilded reliquary coffin that formed the chamber’s altar, over which was carved SANCTUS CELESTINA ETERNAE and which seemed to fill the remembrancer with a buzzing stir.

More voices had joined to the choirs around him, and as he watched he was shocked to see the bones within were glowing and pulsing with the ebbs and flows of song. The harmony intensified, and as the sacred words of the Superior continued, he saw cloth, gold, steel, afterimages on his eyes, but he could not blink them away now!

The Sister turned and locked gaze with him for the first time. “I permitted your presence in the sanctum today, Remembrancer, to ensure beyond any doubt that my Order recalls for millennia with righteous pride the Resurrection of the Saint to lead this crusade.” As she spoke, the hymns reached a brilliant peak of resonance, and golden light poured forth from the reliquary, blinding the Terran remembrancer as he staggered and fell to the floor. The beat of great wings filled the air, and a rush of wind over his face – he opened his bleary eyes, and hovering above him was an angel, a massive
angel of light, in gilt armor, her blonde hair like the Sun, and wielding a great sword of fire. The remembrancer was stunned, filled not with
fear but with fervor – in all his visits to the holiest of the Emperor's shrines, nothing ever like this!

The Superior, with the Living Saint Celestine now above her, walked calmly to a nearby glass portal-wall, looking out into the
darkness, the final light of the star’s setting falling away behind the
planet. Lit from behind now only by the burning glow of the angel, her head dropped, and her voice was unexpectedly quiet as she spoke her last words of the night.


“This planet will tomorrow be our pyre for the xenos. This
system will burn, and they will not pass by. The xenos expect war and will find damnation. There is no clemency, no tolerance
for their vile sin."

She raised her head, her face shrouded in darkness. "Let us be ready for the morning’s endeavor.”

She turned, and her visage was fury.
“LET US NOT SUFFER THE WICKED TO LIVE!”

Posted by sonsoftaurus at 9:31 PM