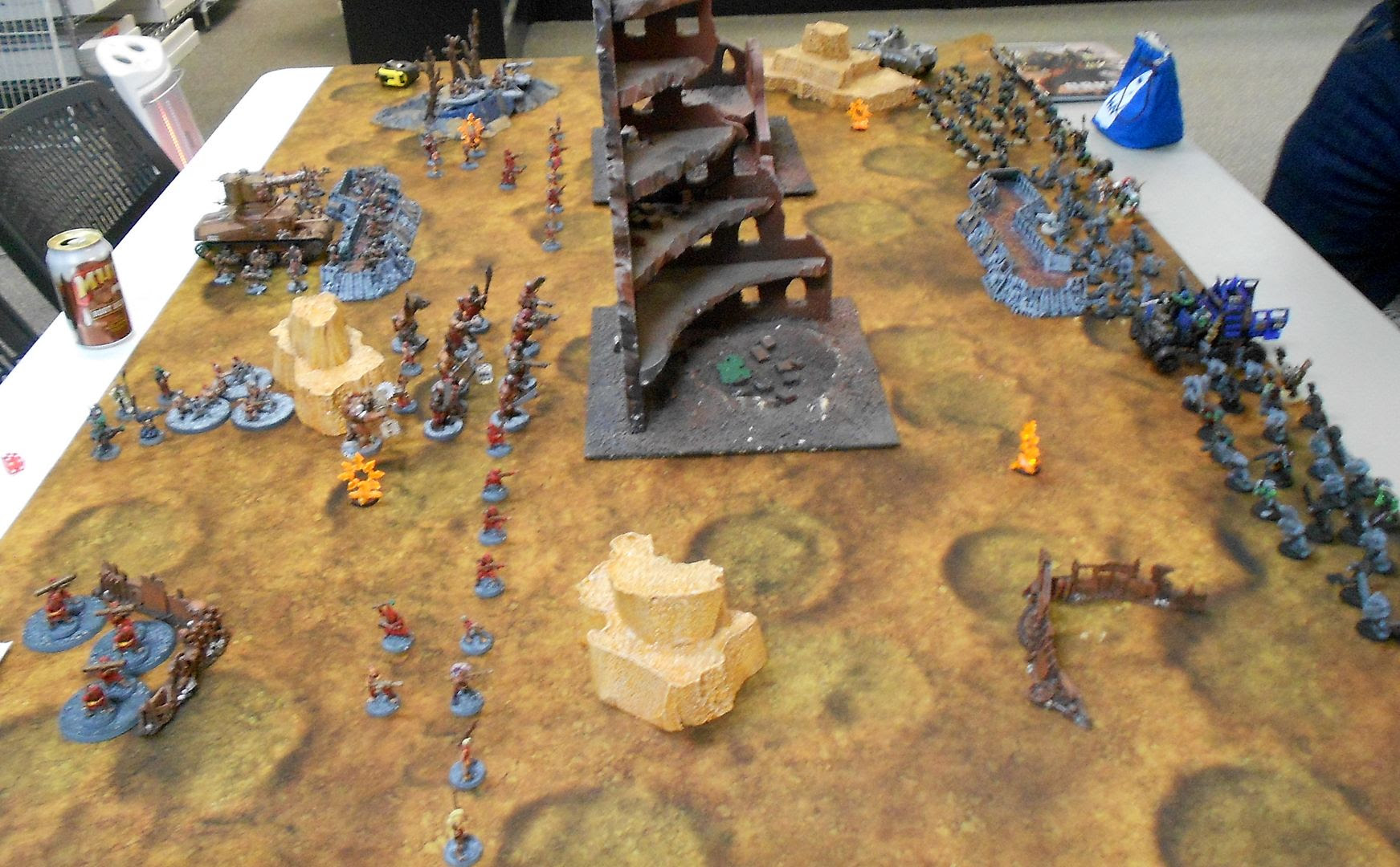 League game against Leonard's orks, my 1400pts against his 1100.  While I had been getting pummeled by various marine armies Leonard has been on a good run, hence our point disparity (for those just joining us, for this league we started at 1000pts and when you lose a game you get +100pts).  We used missions James M had written up, and our combination led us to a very heavy board control mission, with objectives in each quadrant and quadrants as objectives themselves, plus the normal first blood, etc.

The hills were some I had recently finished and brought in for store use.  I had originally done them up a few weeks ago, but hadn't coated them as thoroughly as I thought when I went to spray seal them, and paid the price.  I decided to make lemonade though, and incorporated the extra texturing that resulted for a repaint - and a sealing by hand! 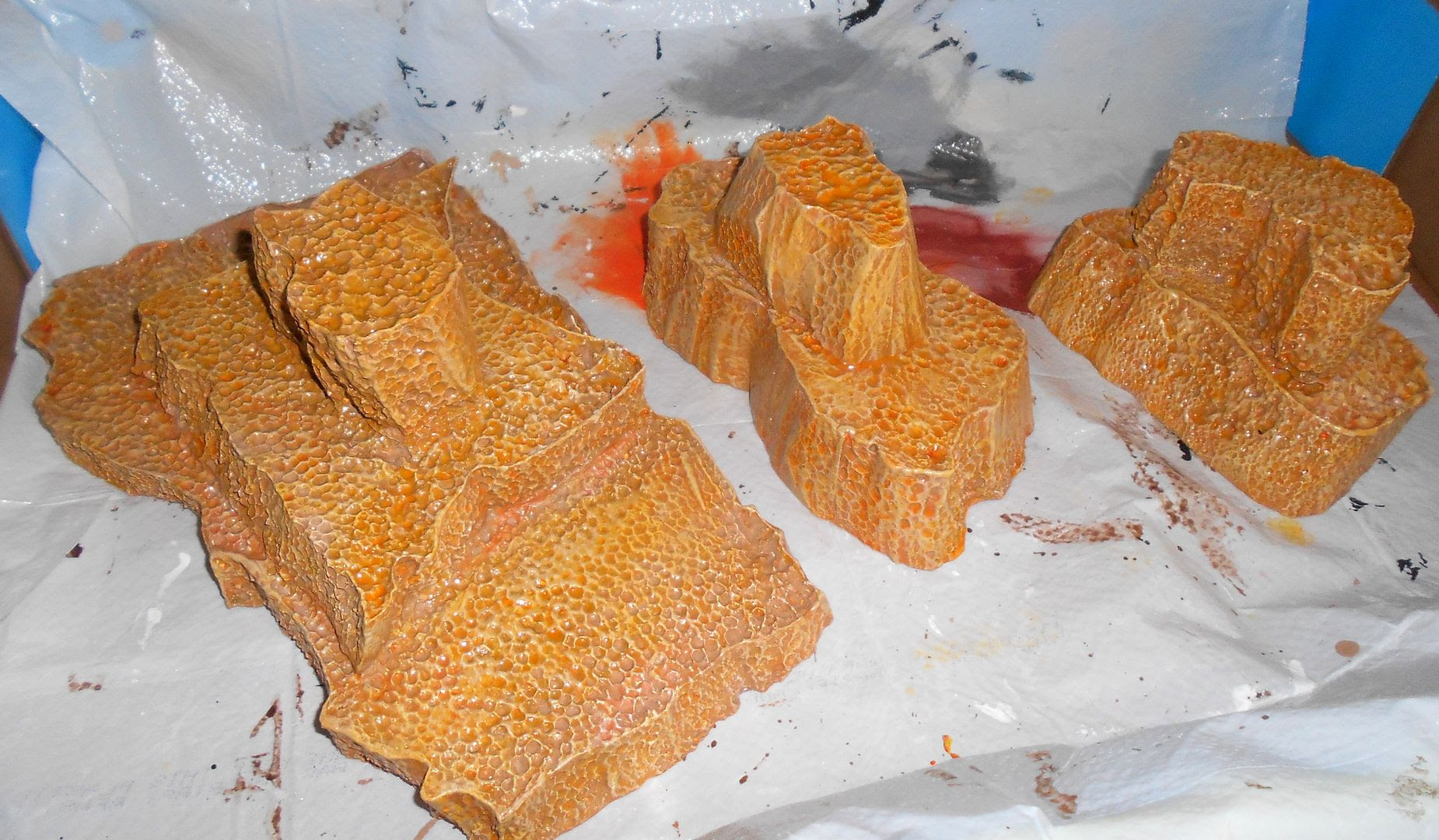 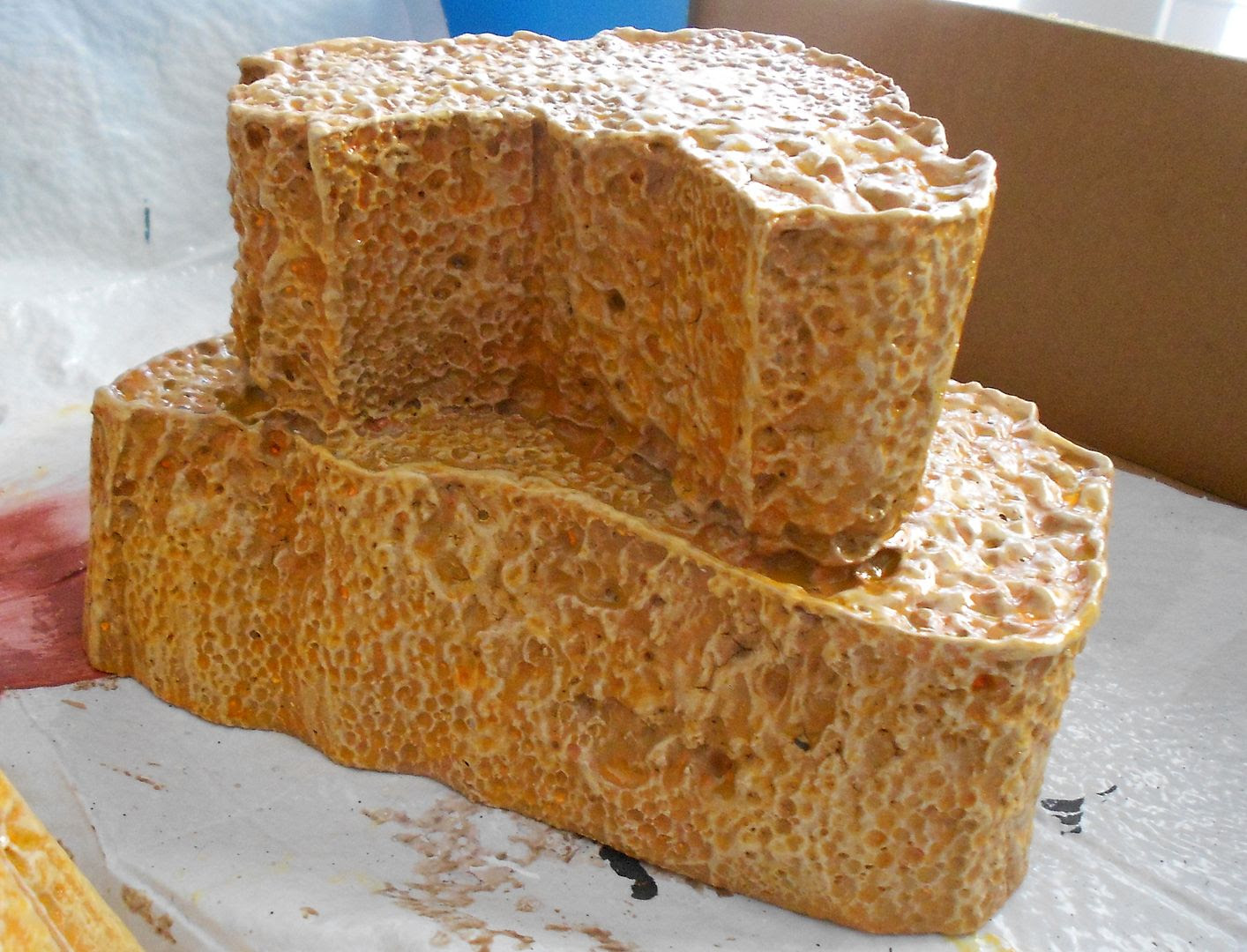 But back to the battle!  The orks stole the initiative and pounded my weapons teams, running off the lascannons and taking the missile launchers down to one team.  Stormboys and foot mob pound forward.  I blast away at the stormboys, taking out a little over half but the survivors hardly notice.  (Trukk in the picture is a battlewagon loaded with lootas.) 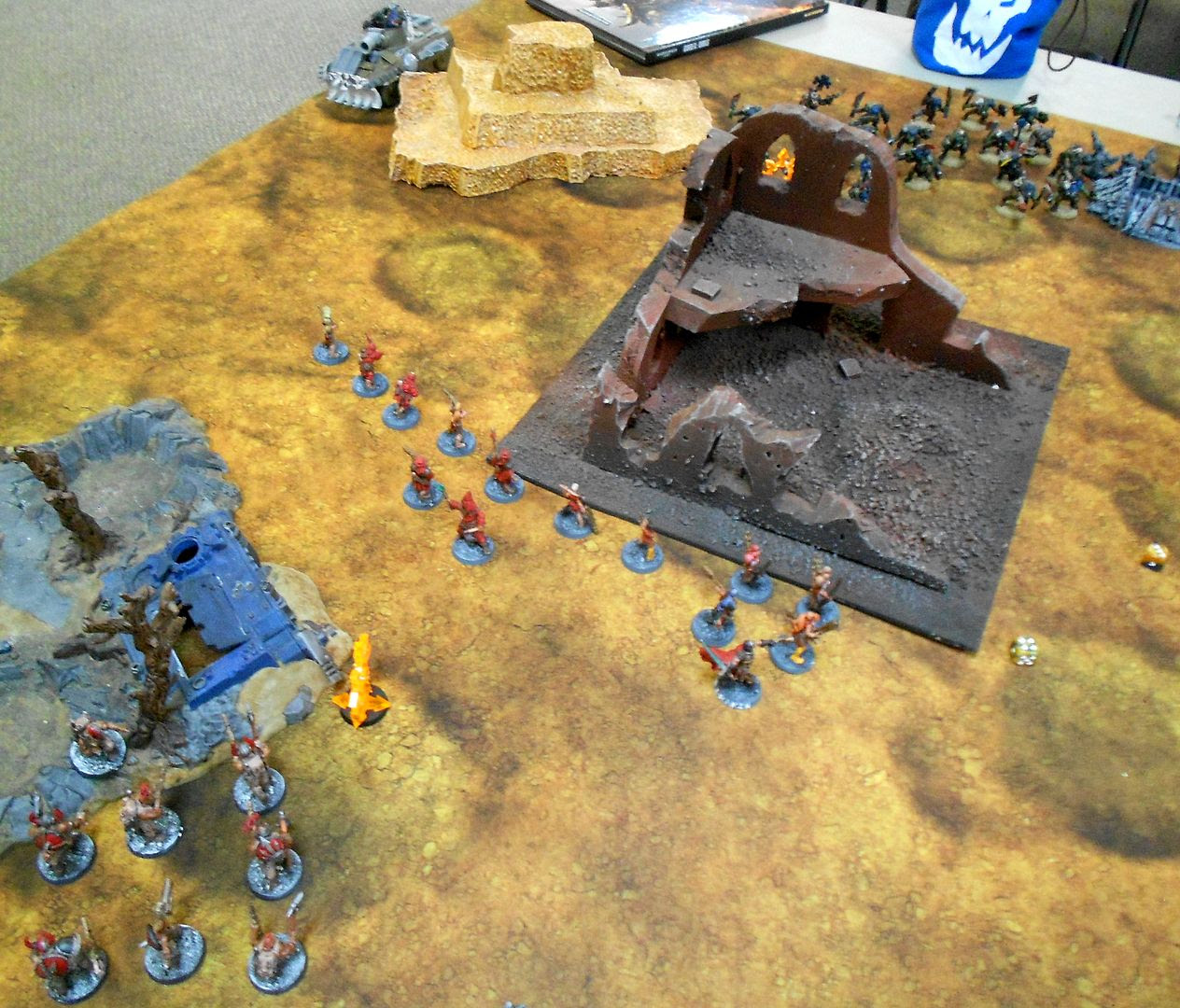 Scythiak forces shift left to try to get a meltagun on the looted wagon while flamers lurk behind to torch advancing boys. 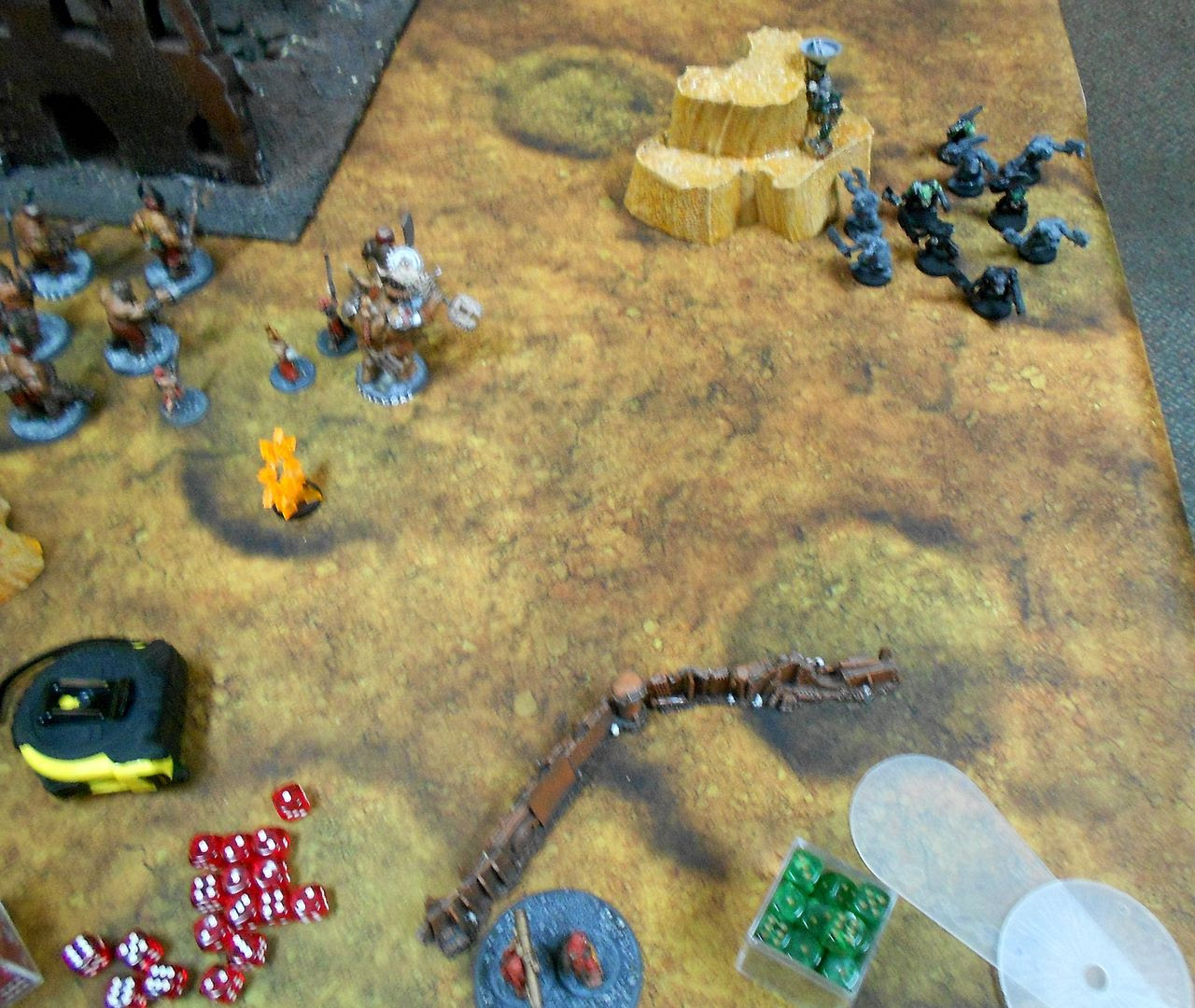 Stormboys take out a cultist squad, but the cell leader managed to take out the nob in a challenge.  Where's my chance to turn into a Daemon Prince? 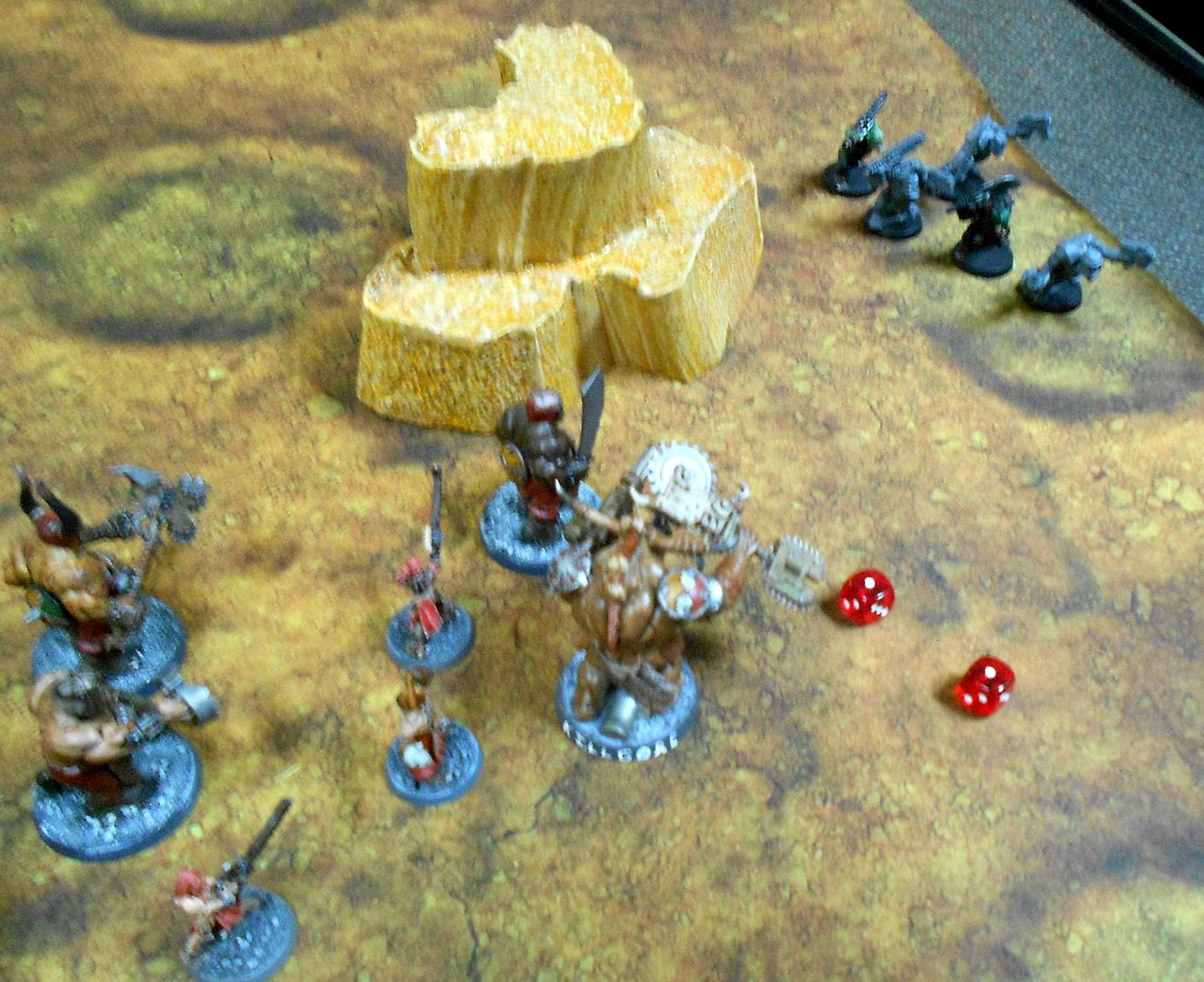 Ogryn move up and whittle the stormboys down, but fail the charge, taking some hits from their asthma inhalers instead. Stormboys move around and take out the remaining missile launcher. 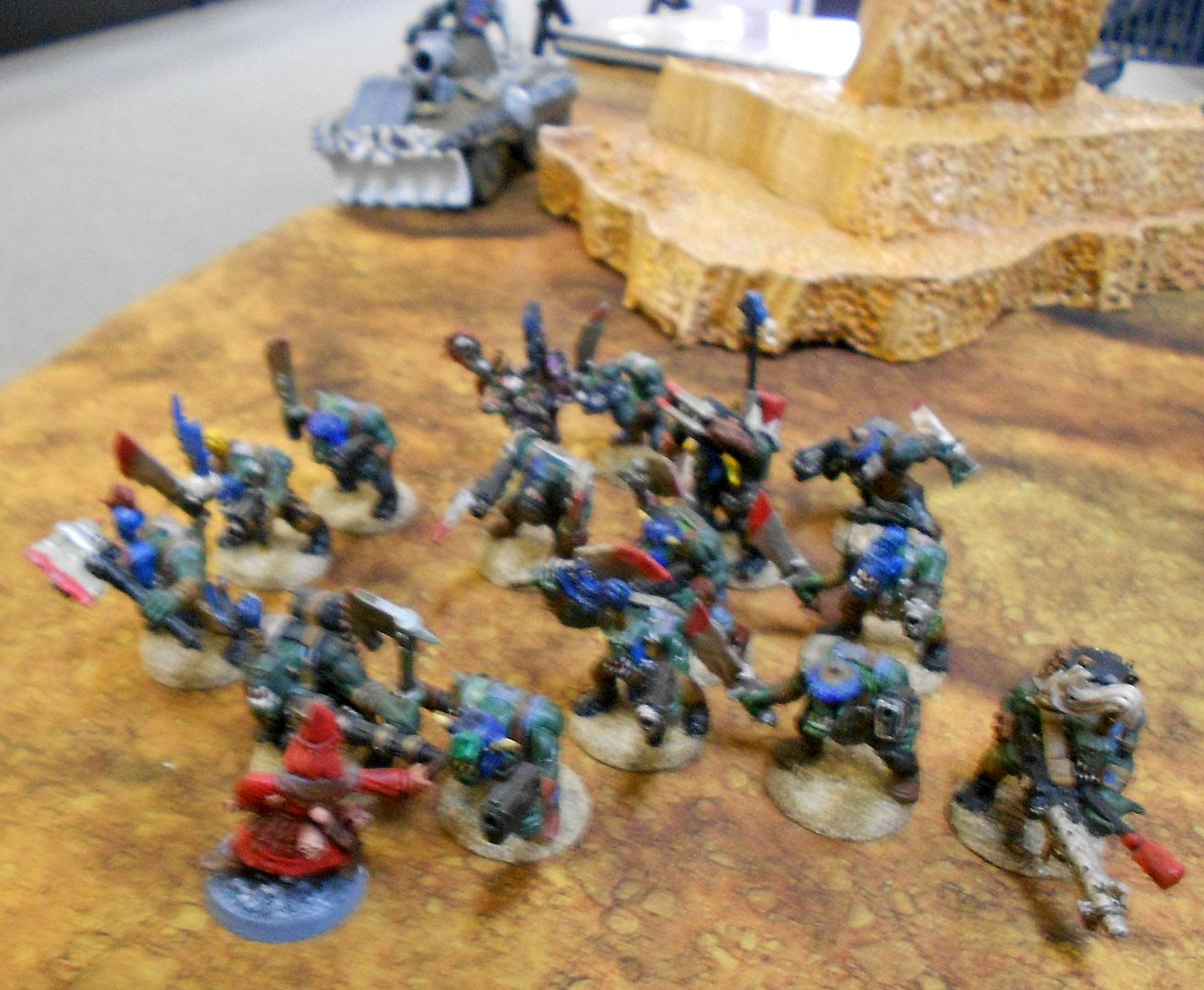 Foot mob takes out the meltagun cultist squad, but the cell leader holds on.  Mistake.  I should have let him die and left a standard trooper, as I made my morale roll exactly on his higher leadership, leaving me unable to flamer/nova cannon/mortar the orks in my turn.  :-( 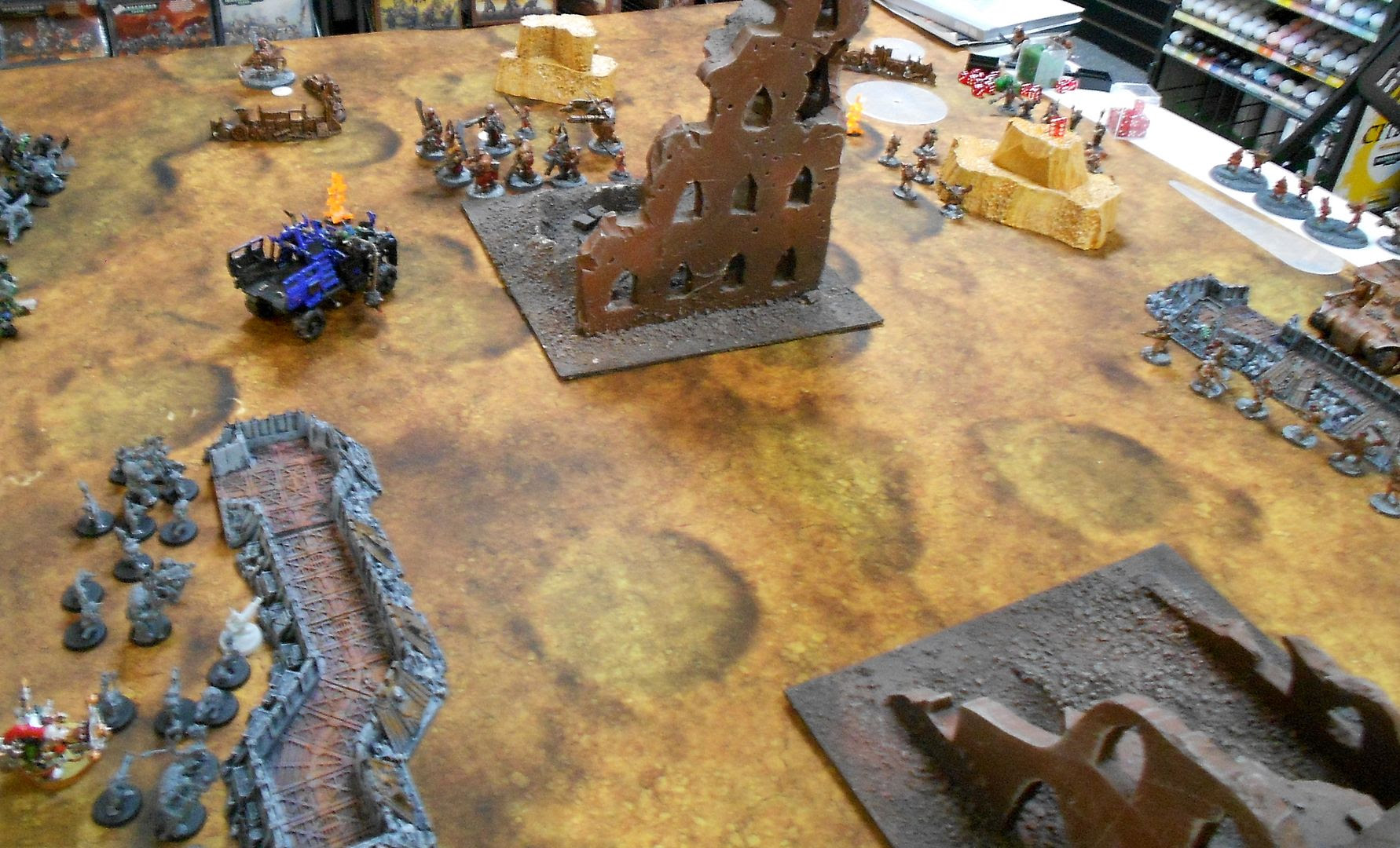 The shokk attack gun killed as many orks as Scythiak this game, not terribly effective.  Here Ogryn turn the corner and get close to the battlewagon and lootas while command squads move to deal with stormboys. 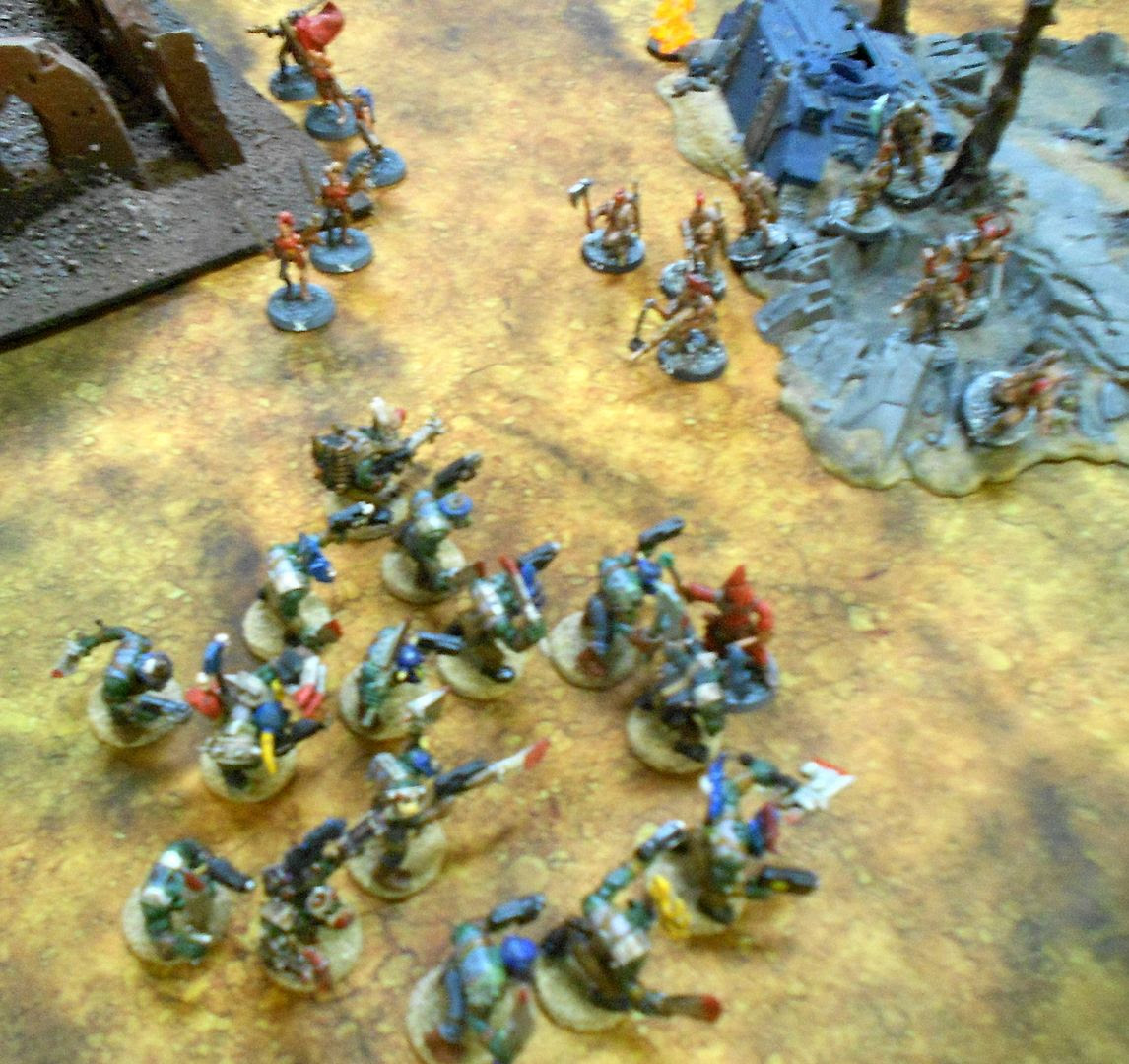 Since they couldn't shoot the orks, support squads move in to counter assault. 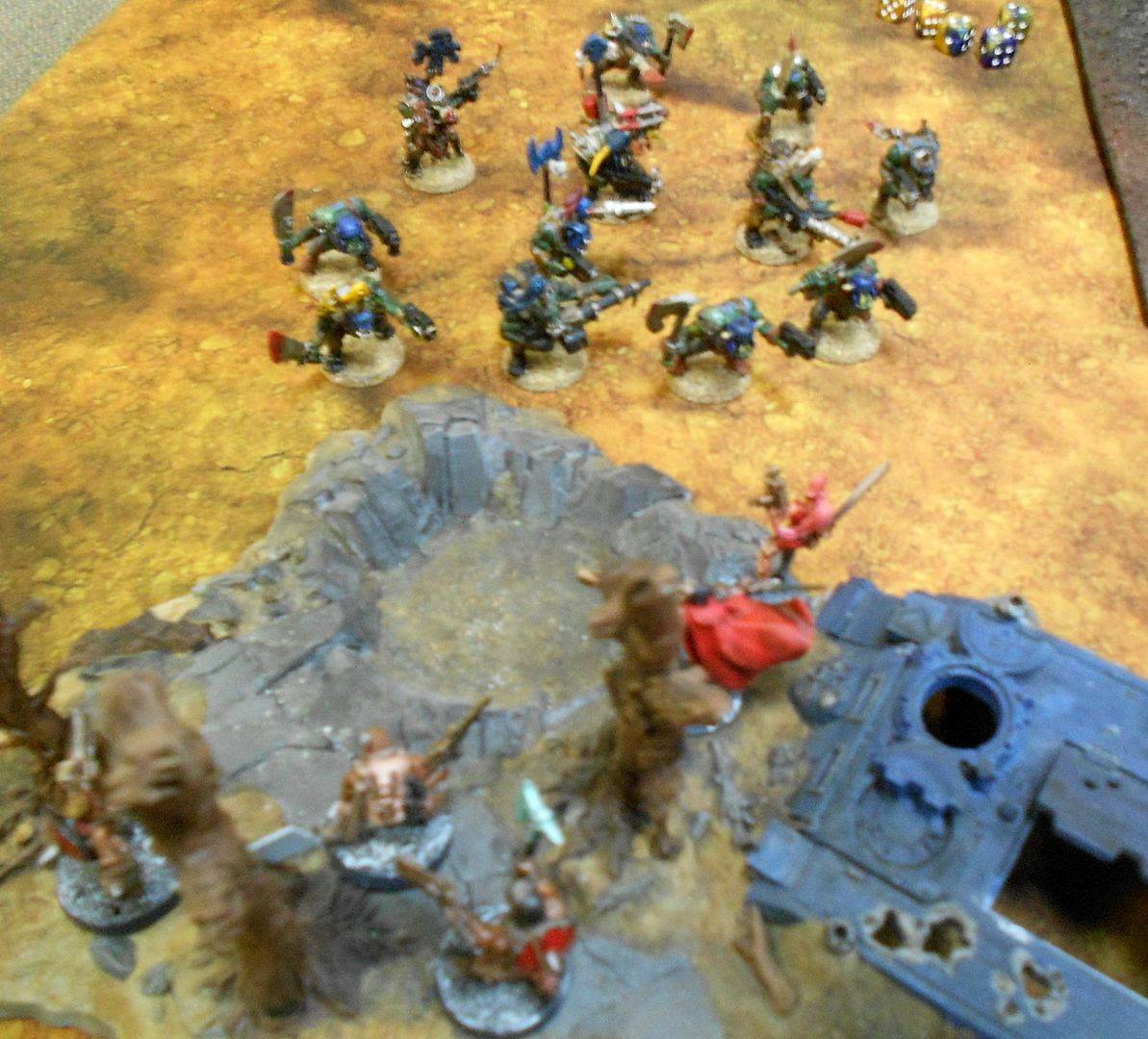 Didn't work out too well.  Survivors break and run away.

The boys continue on to munch another squad.  Go go painboy saves! 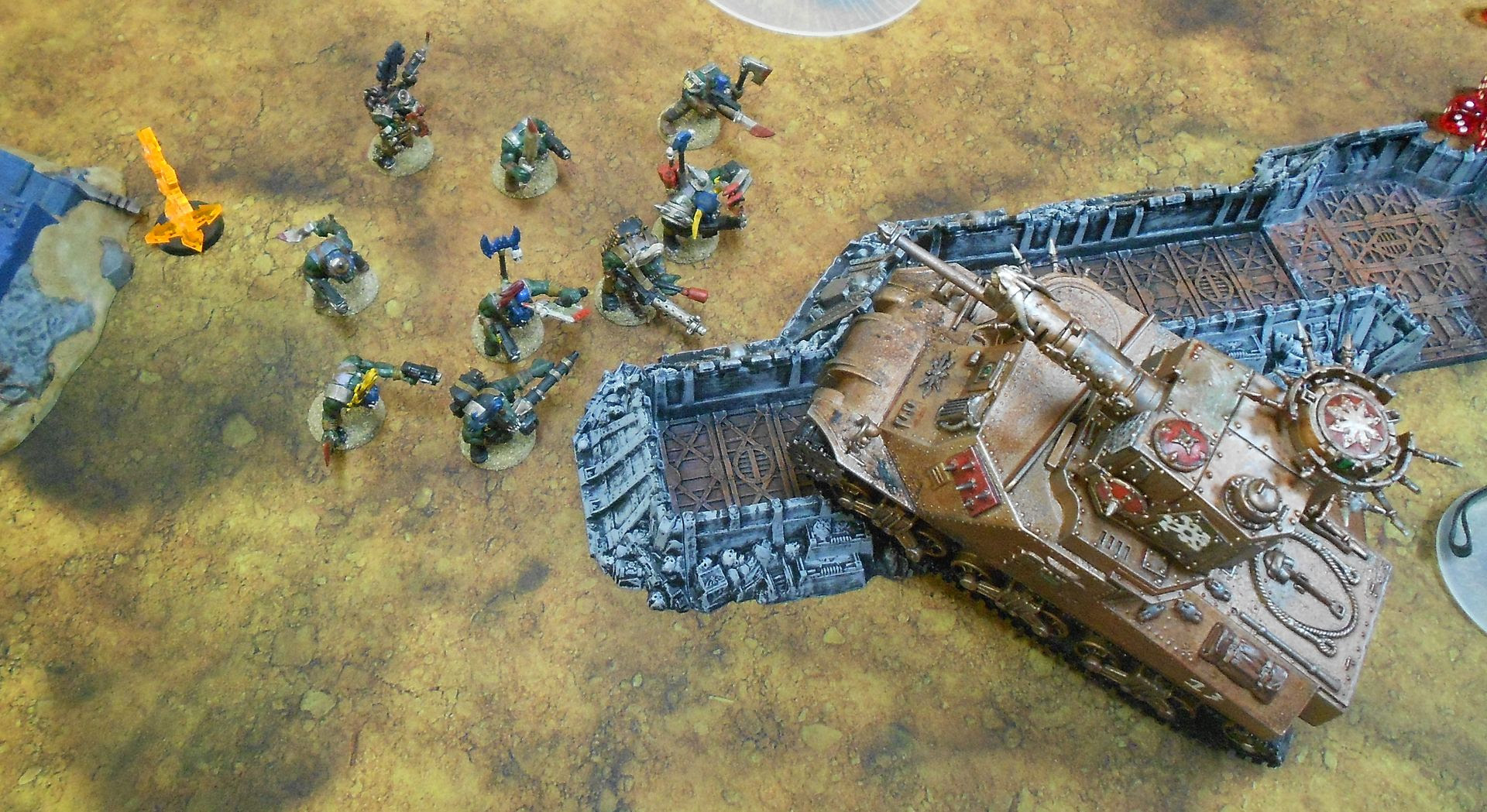 Bereft of infantry support, the Atrocitor tank crew tries to take matters into its own hands.   Hull heavy flamer kills one ork, but the nova cannon scatters away.  Uh oh... 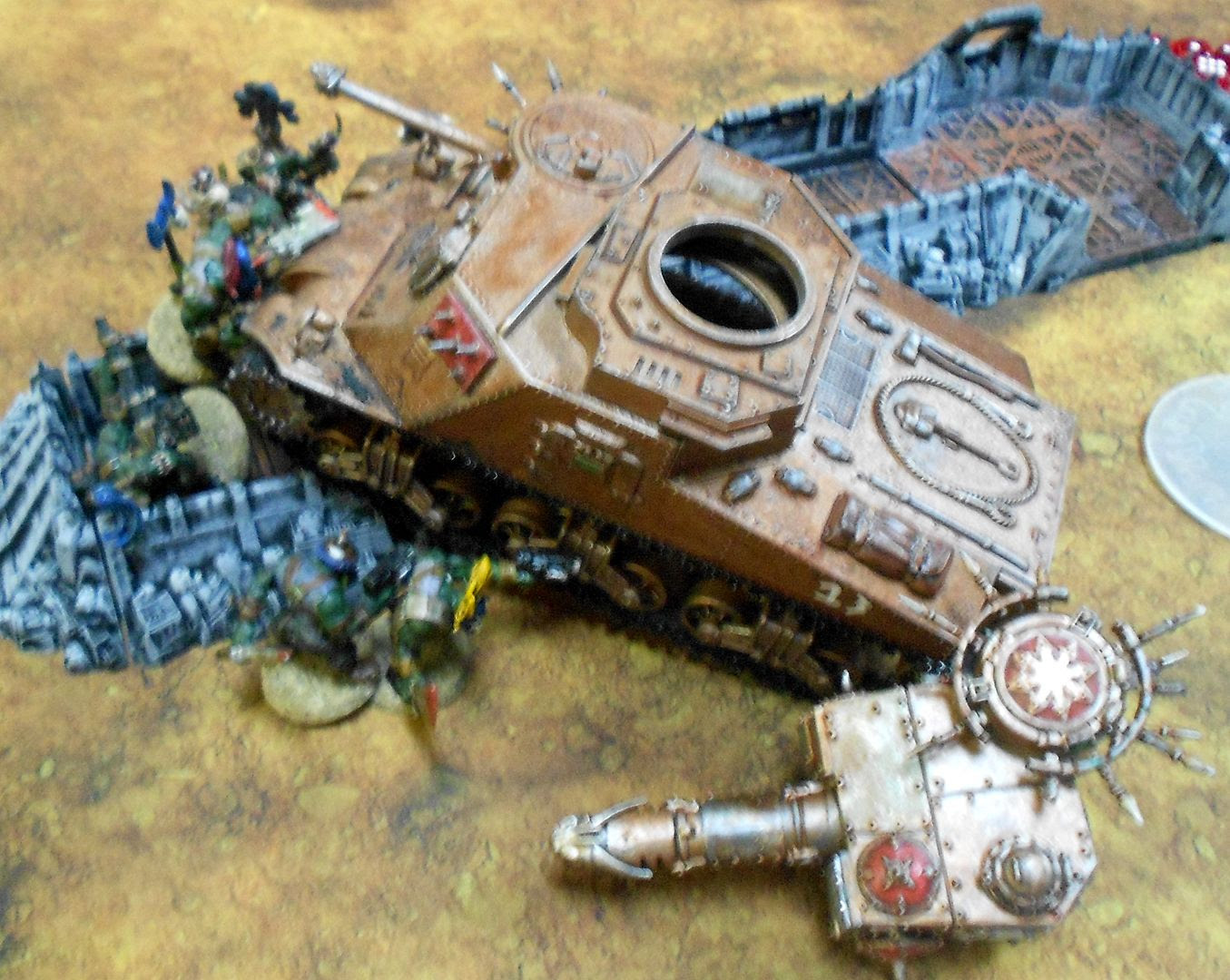 Poor nob.  His boys have done all the work, I don't think he got a chance to swing his klaw all game. In the end I had three objectives, two table quarters and linebreaker leaving the Scythiak victorious.  Leonard was happy to have a chance to add more points to his army after his long winning streak.  Definitely helps to lessen the sting of defeat. 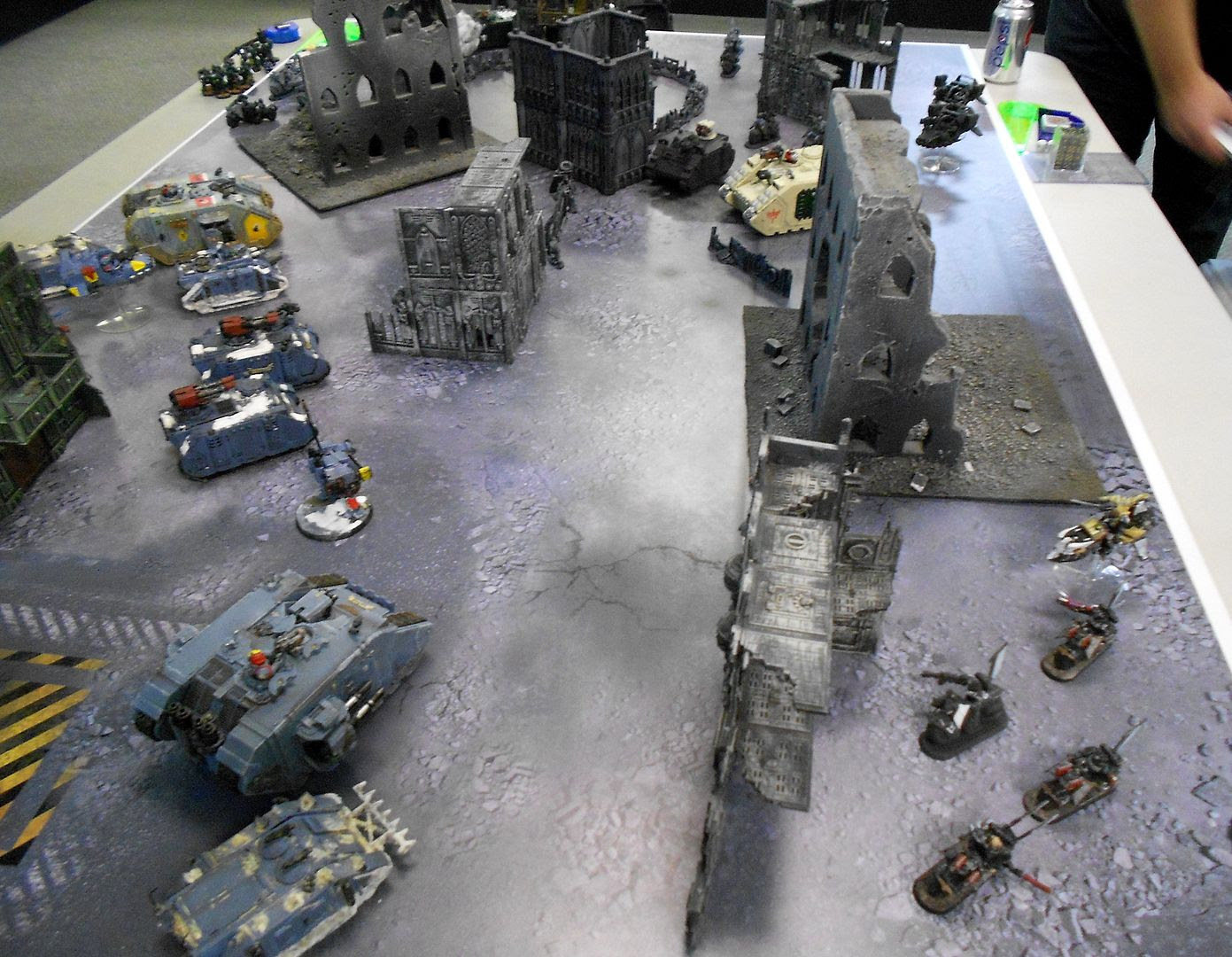 Posted by sonsoftaurus at 7:30 PM