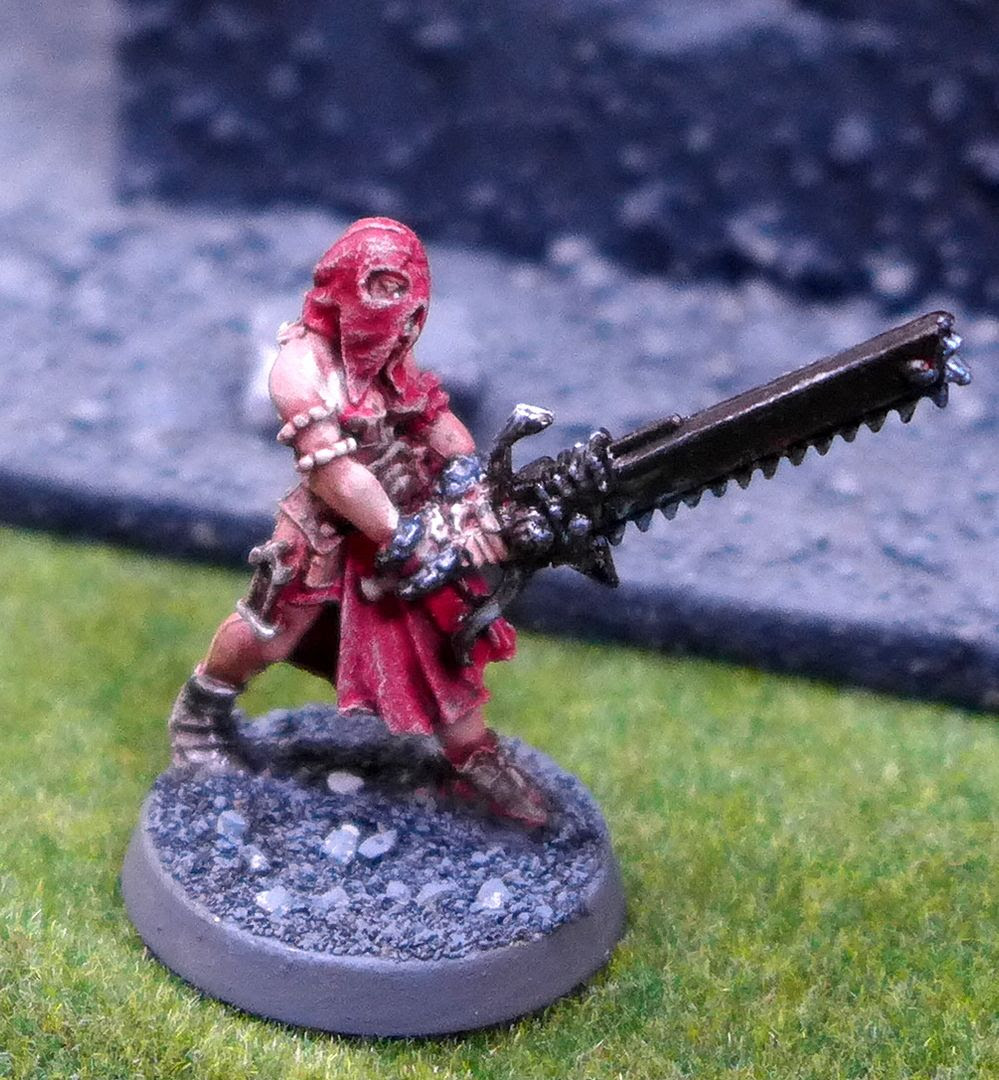 I managed to get a league game in, this time against Josh's Eldar, my 1100pts vs. his undefeated 1000pts in a Relic match.  I reordered things a bit, changing my vets to stormtroopers/scions, dropping rough riders and a sentinel to pick up two priests and a Leman Russ Exterminator, and using my extra 100pts for an Aegis line with quad gun for more anti-skimmer shots. 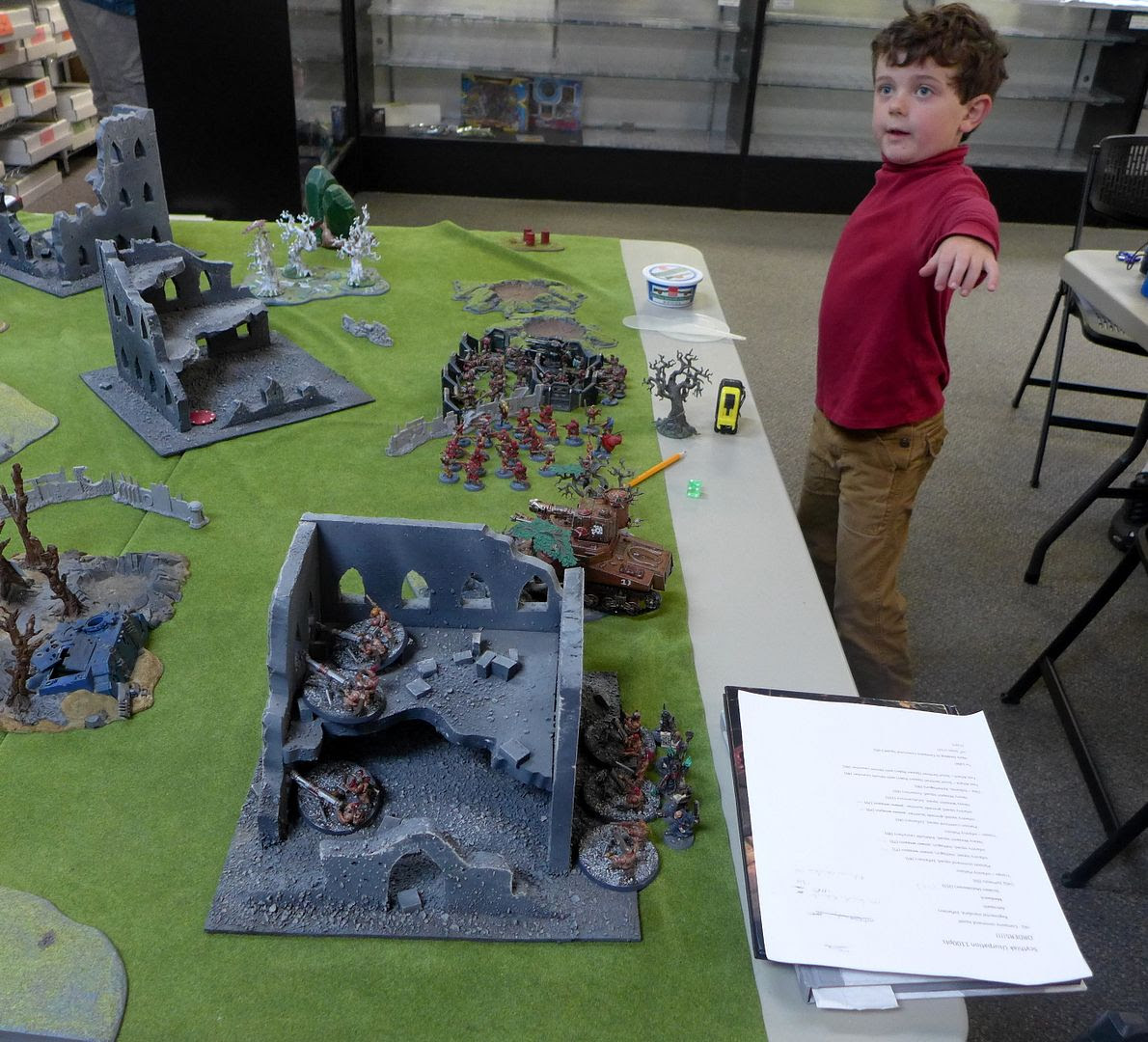 The Scythiak starting positions.  Sonofsonsoftaurus was along today, helping with moving some models and some die rolling in between snacks and his own activities.  I think I even found all the dice afterwards.  Here he is mid twirl, before launching some Tae Kwon Do kicks perilously close to the glass cases. I actually don't get seized upon this game, and manage to go first.  Warp Spiders had infiltrated close to the Relic.  I shot at them a little, but concentrated my fire on the Wave Serpents, actually bringing one down, forcing the Fire Dragons to walk.  Ahead of them, the bike-mounted farseer zips forward and engages some lascannons. 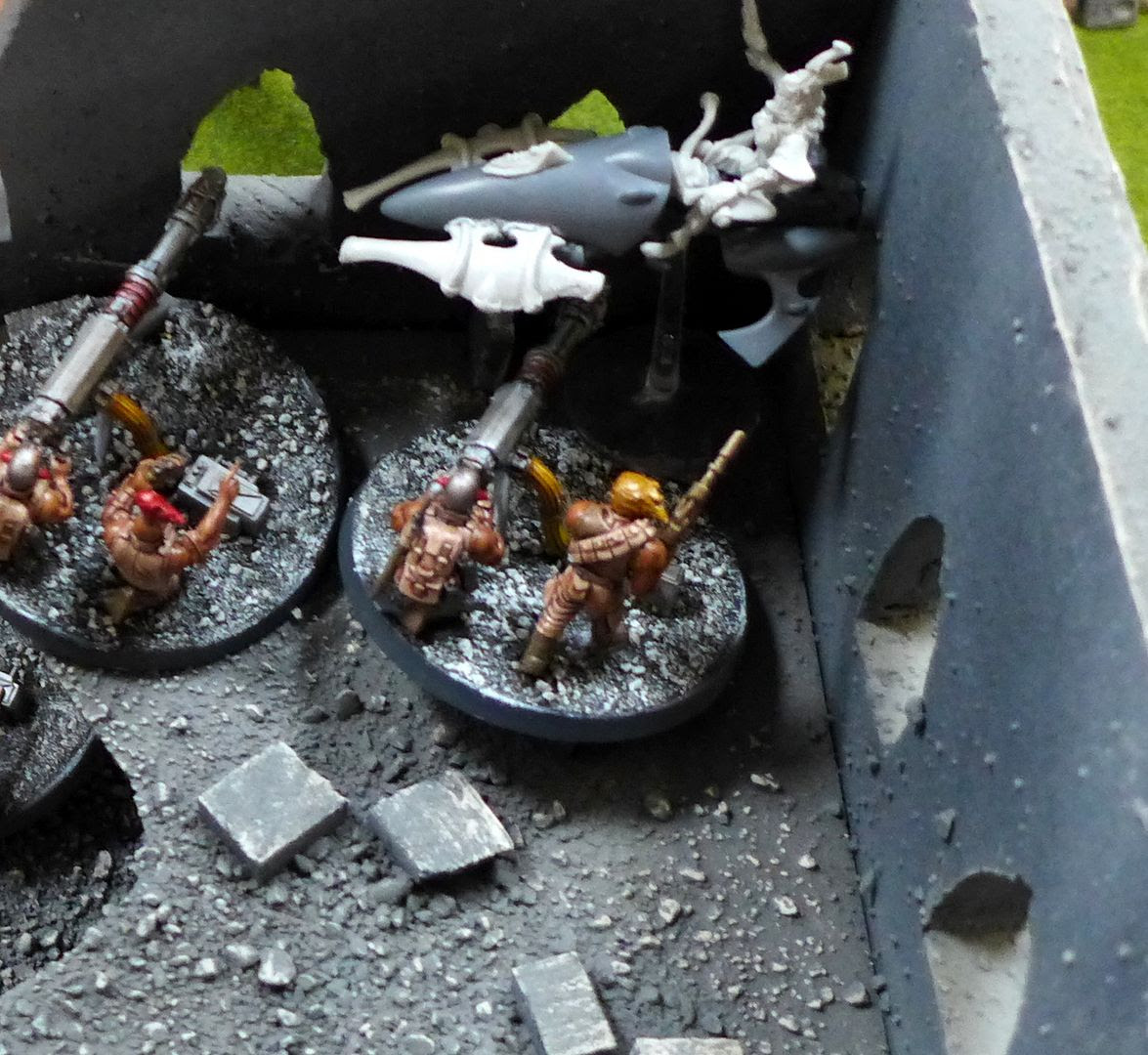 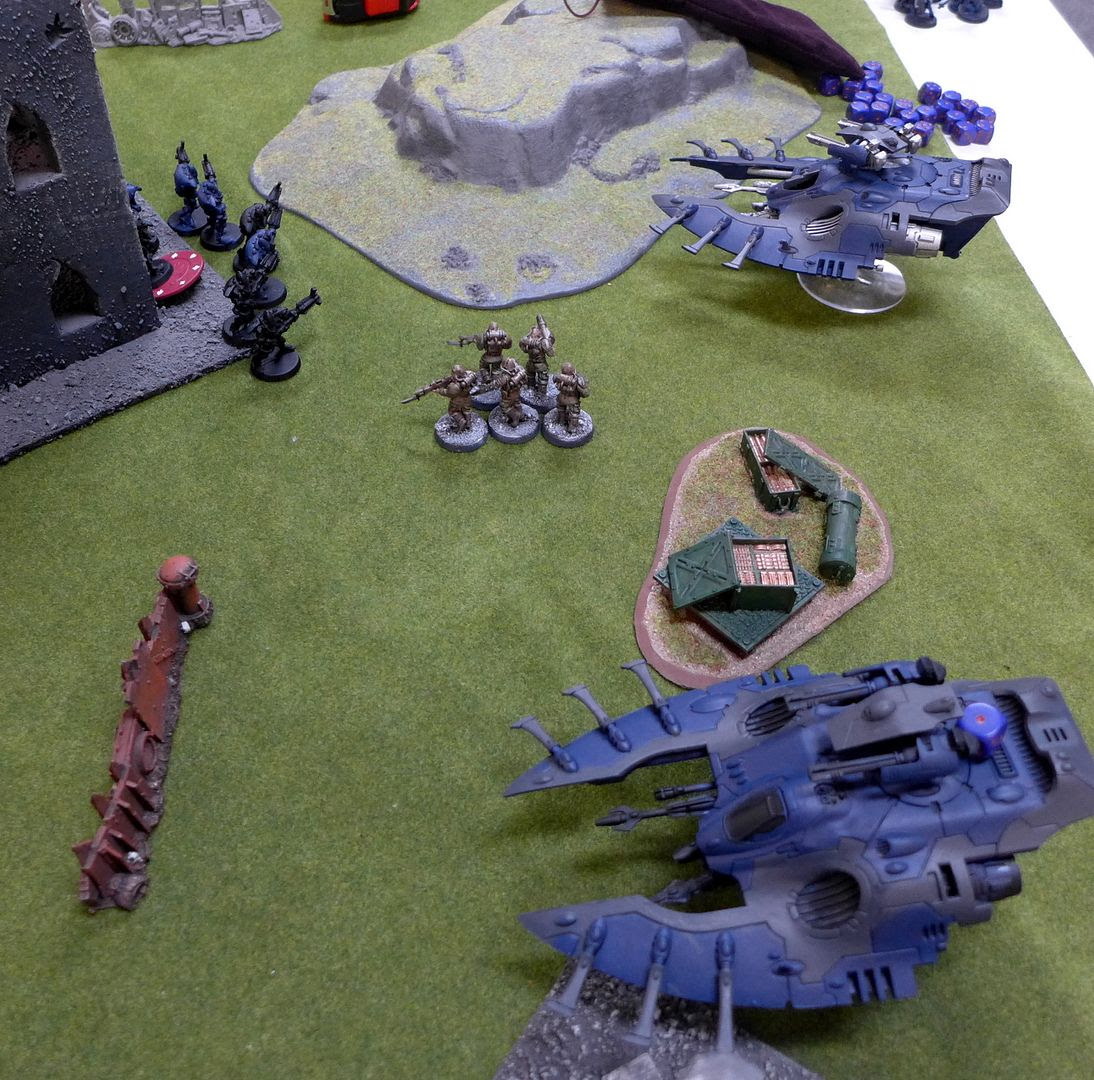 Stormtroopers grav-chute down in the midst of the Eldar. 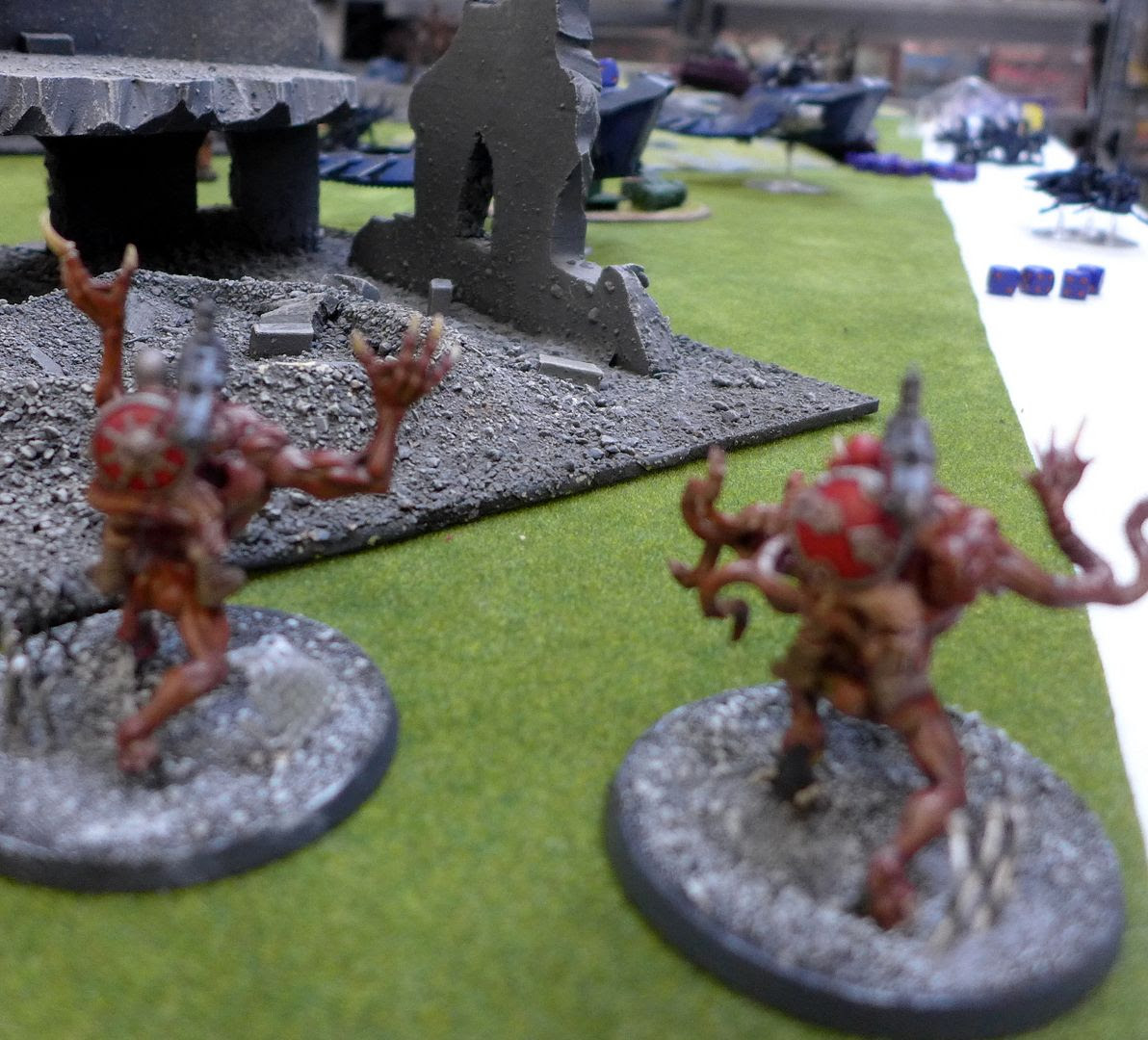 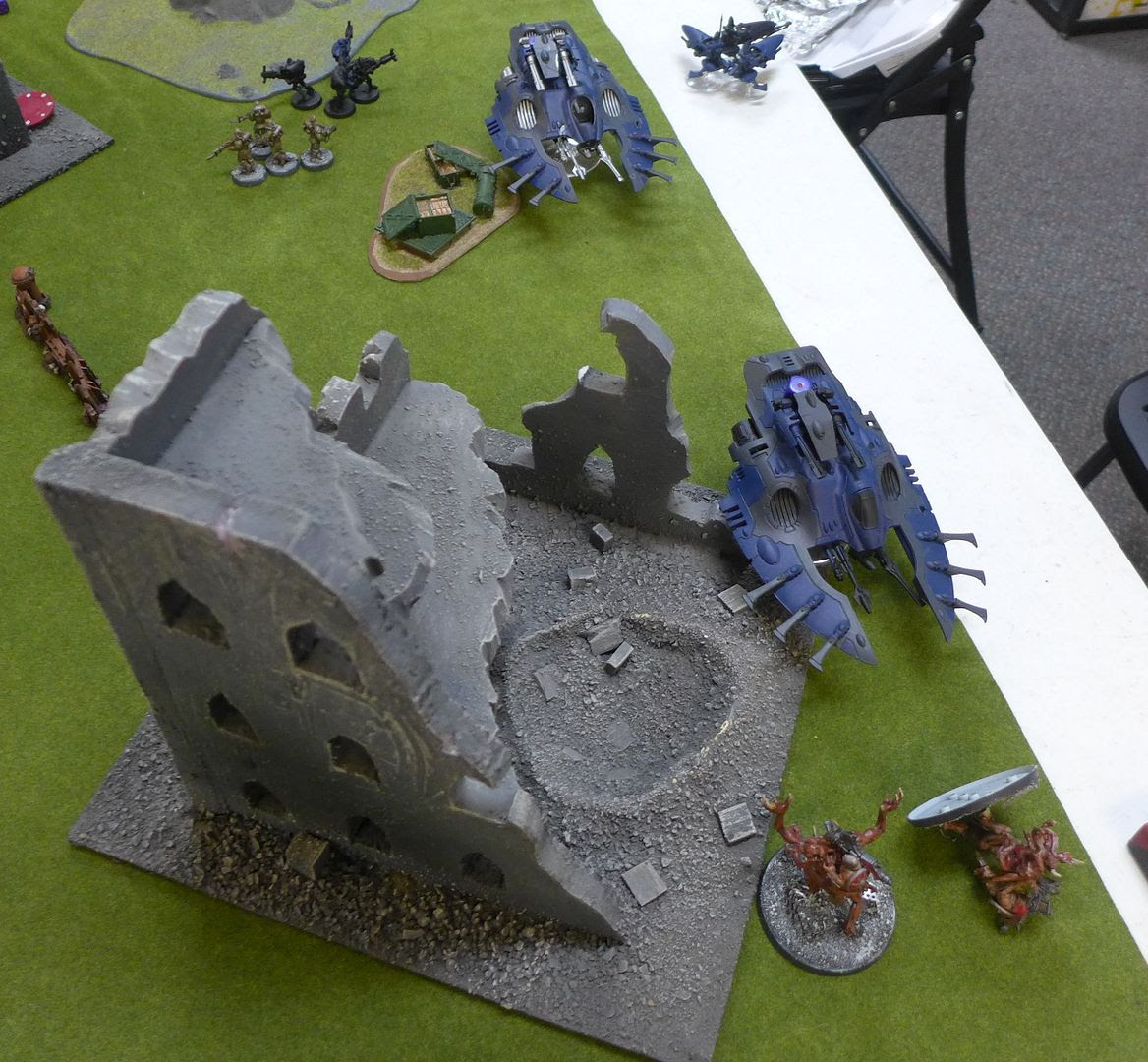 The Warp Spiders take serious casualties and fall back, abandoning their prize in the haste of retreat.  Wave Serpents take down a spawn-rider. 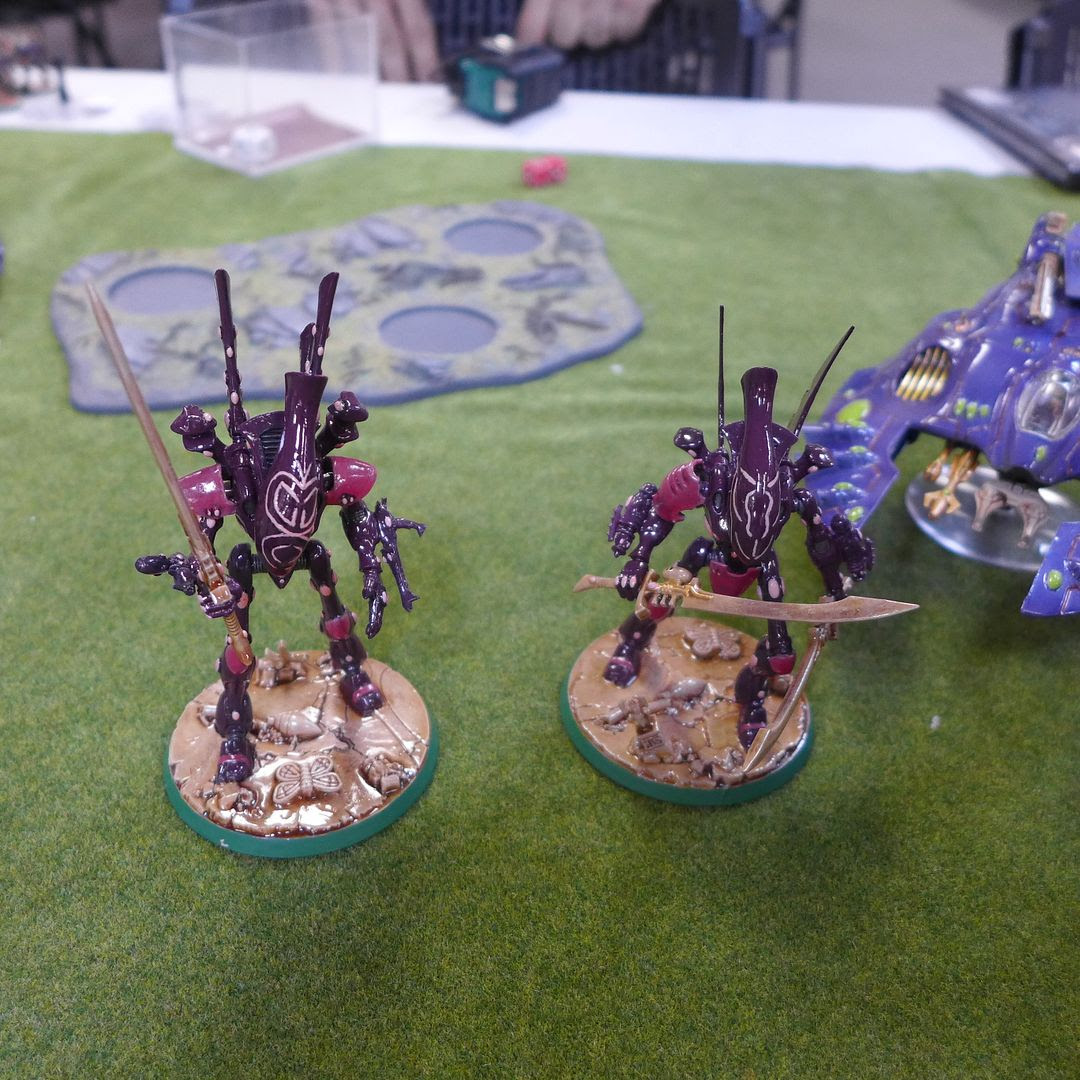 Interlude: some cool Eldar Wraithlords on another table. 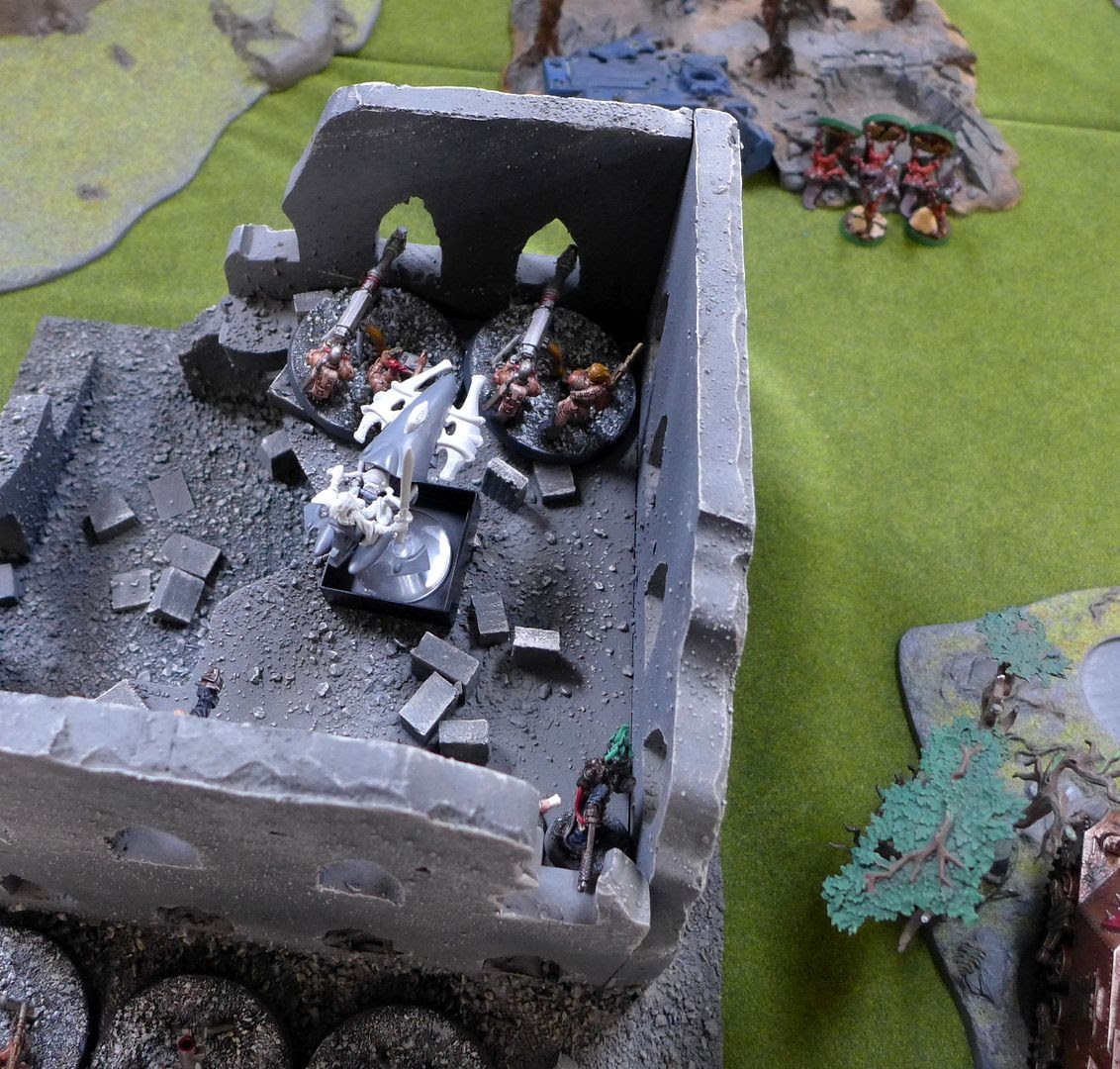 Farseer continues to bedevil the lascannons, hit and running in and out.  My command squad moves up to assist and soon we have a large batch of humans trying to tear down one Eldar. 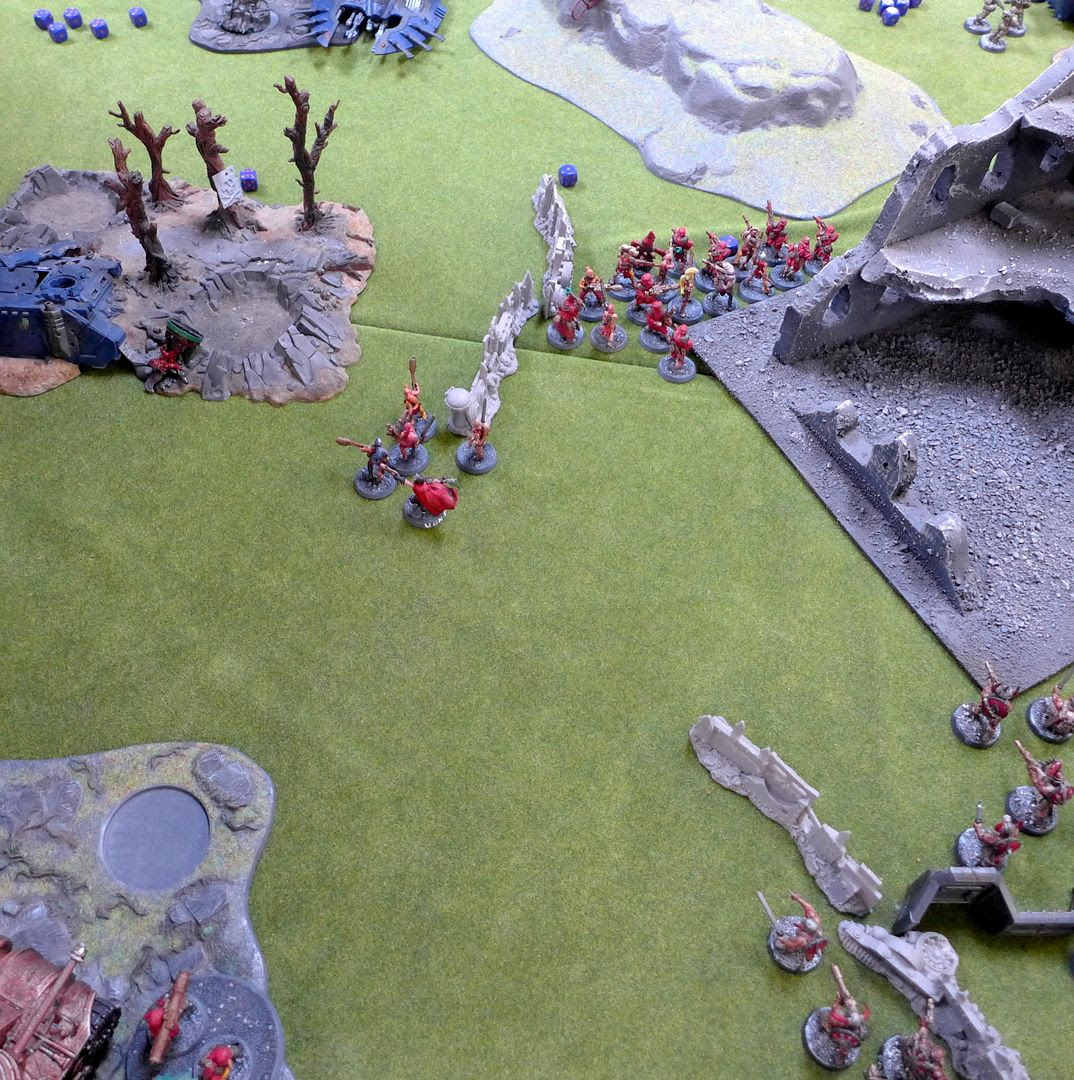 Cultists round the corner and close in on the relic, while the Fire Dragons get cut down to one warrior. 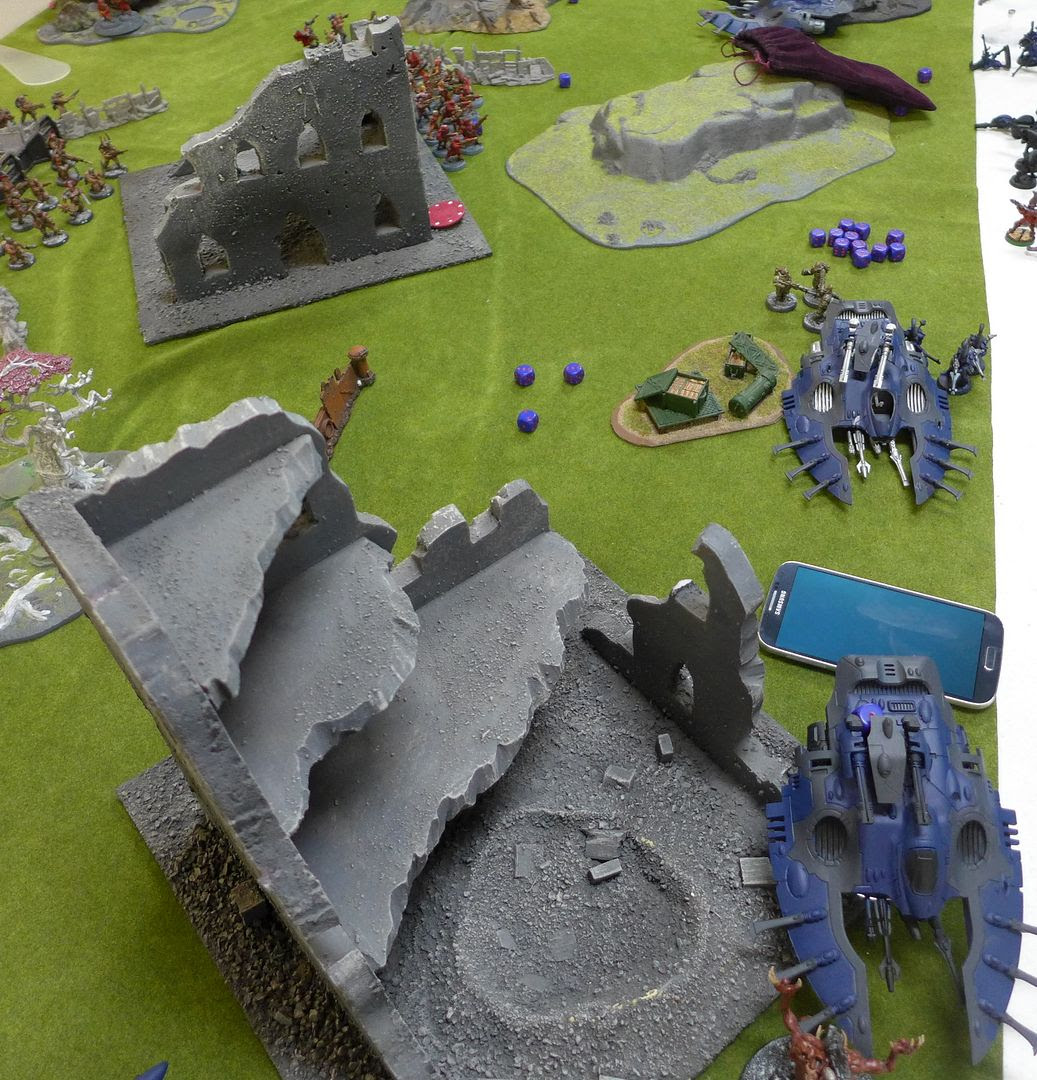 A second wave serpent is downed, while spawn rider tries to claw its way into the third. 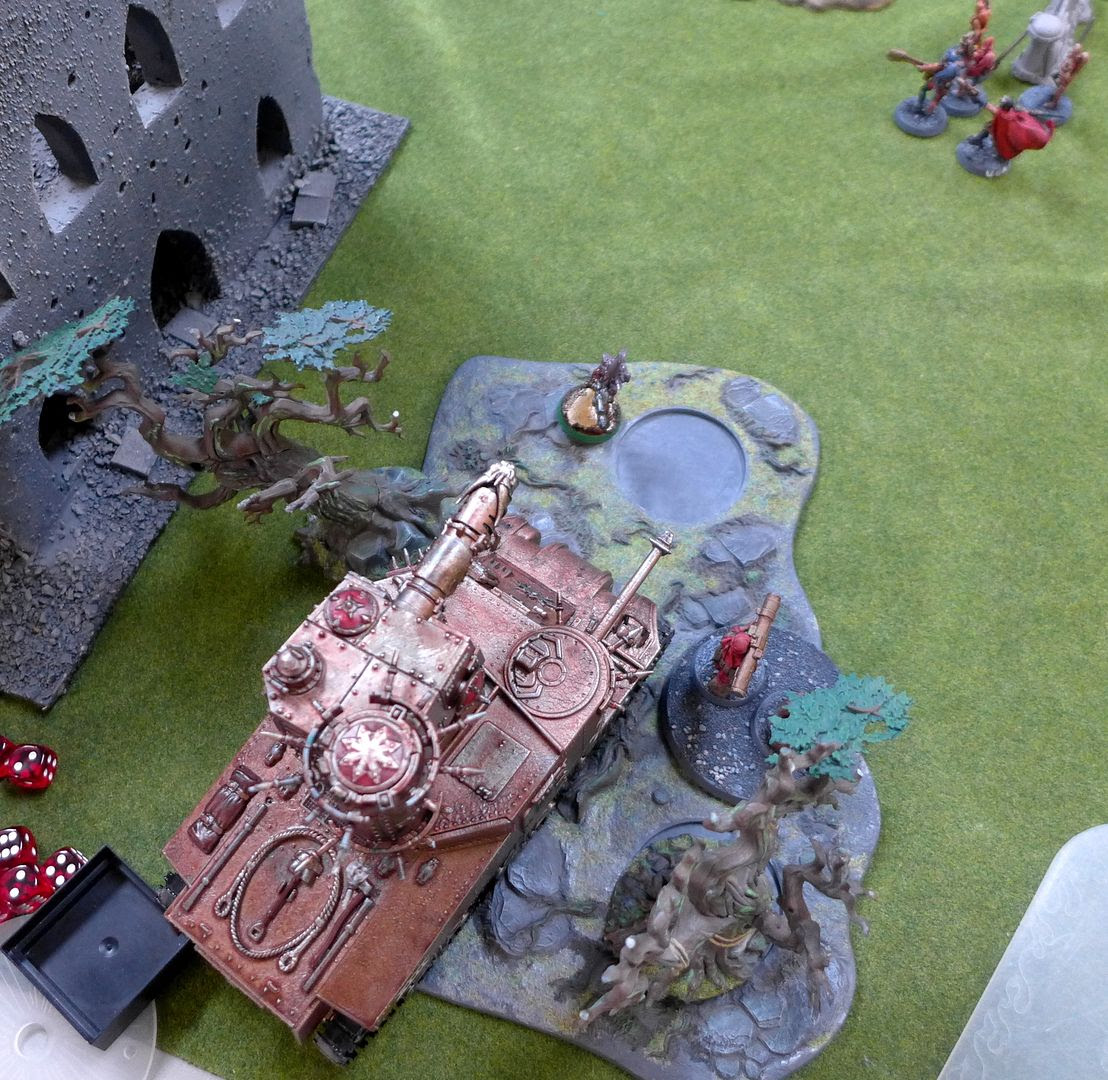 The last Fire Dragon gets up to the tank and...rolls a one.  Having run to get that close, he can't even charge to slap on melta bombs.  He is soon dispatched, insultingly, by flamers. 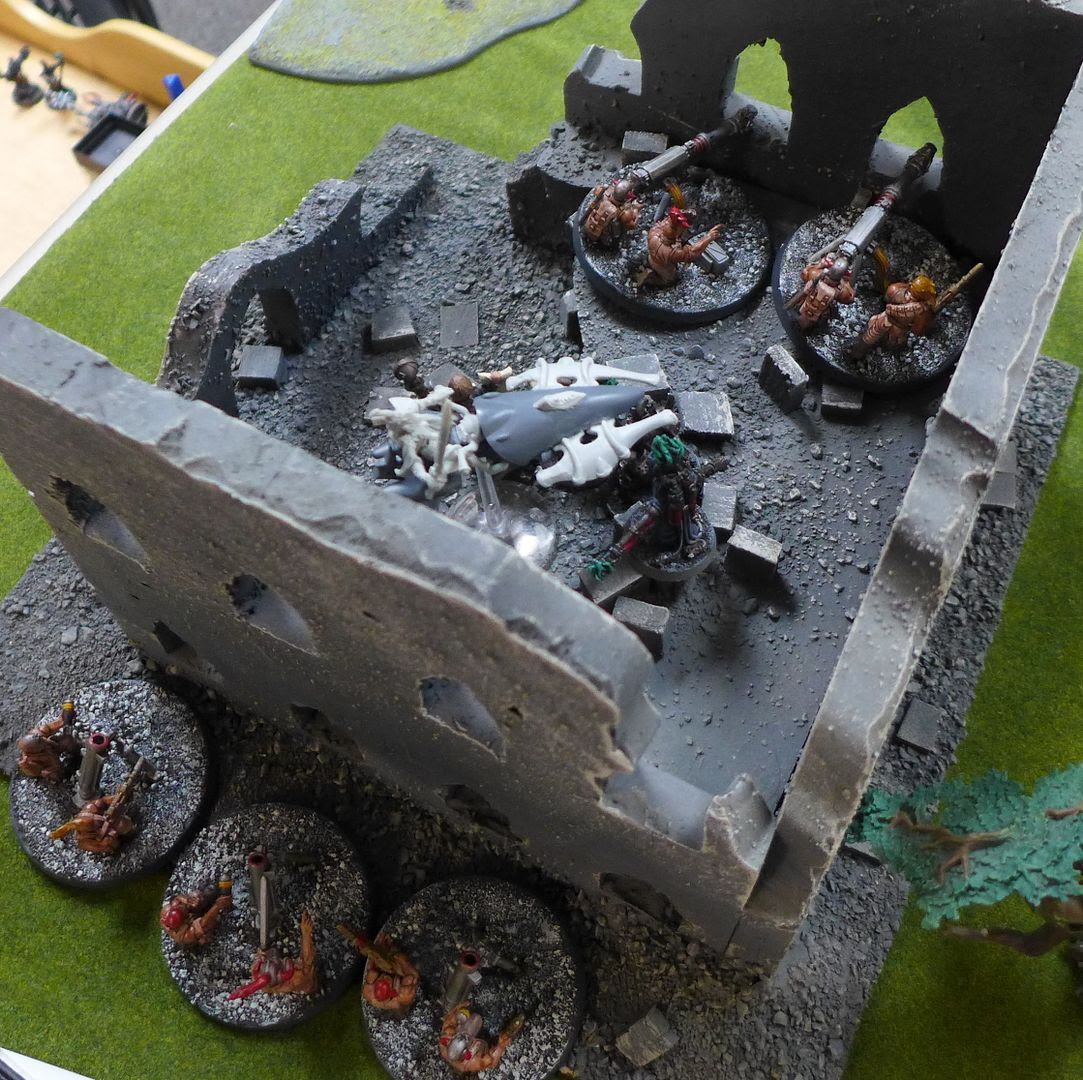 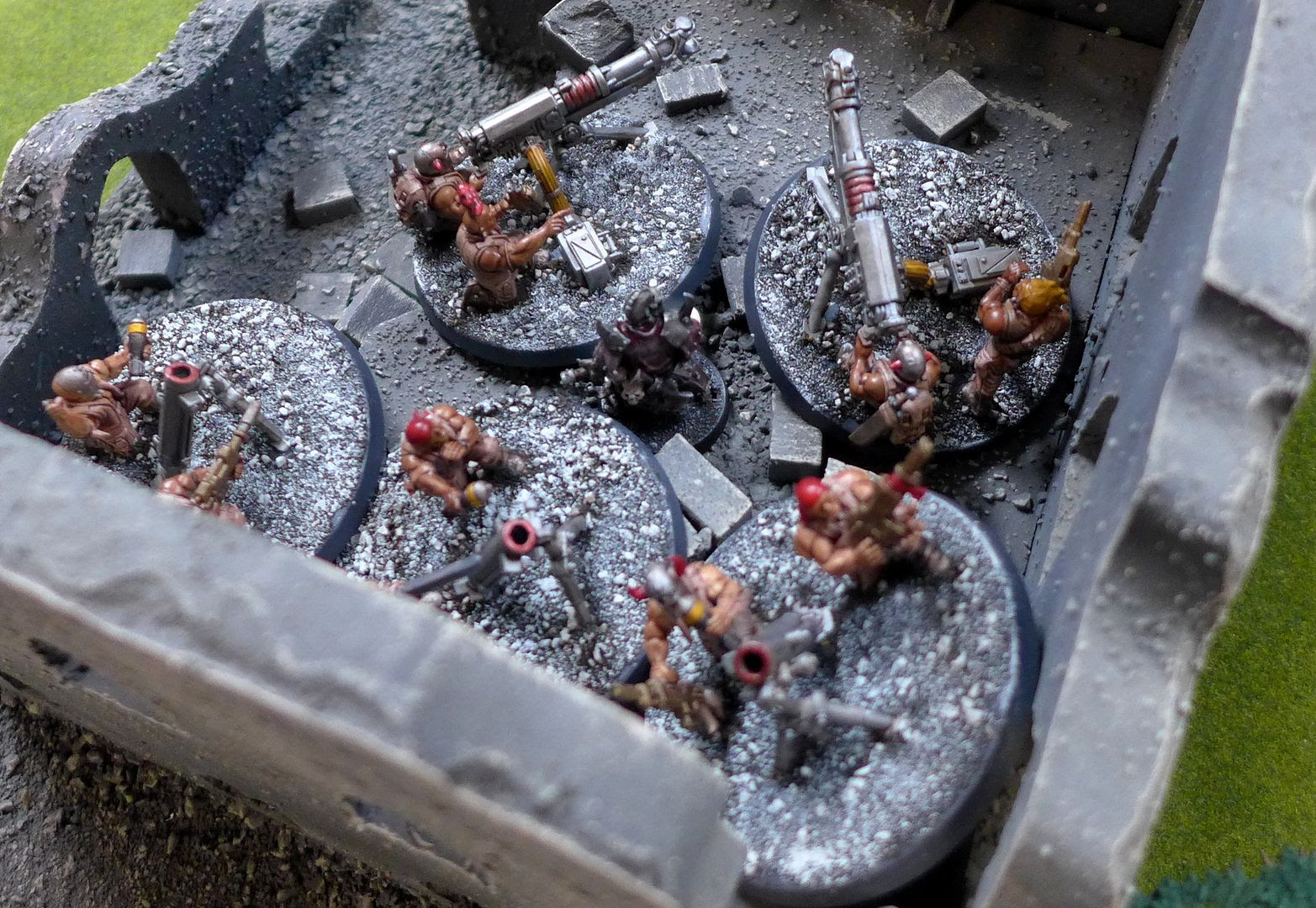 With the mortar squads charging in as well, ultimately there are just too many knives and rifle butts and not enough witchblades.  Scratch one Farseer. 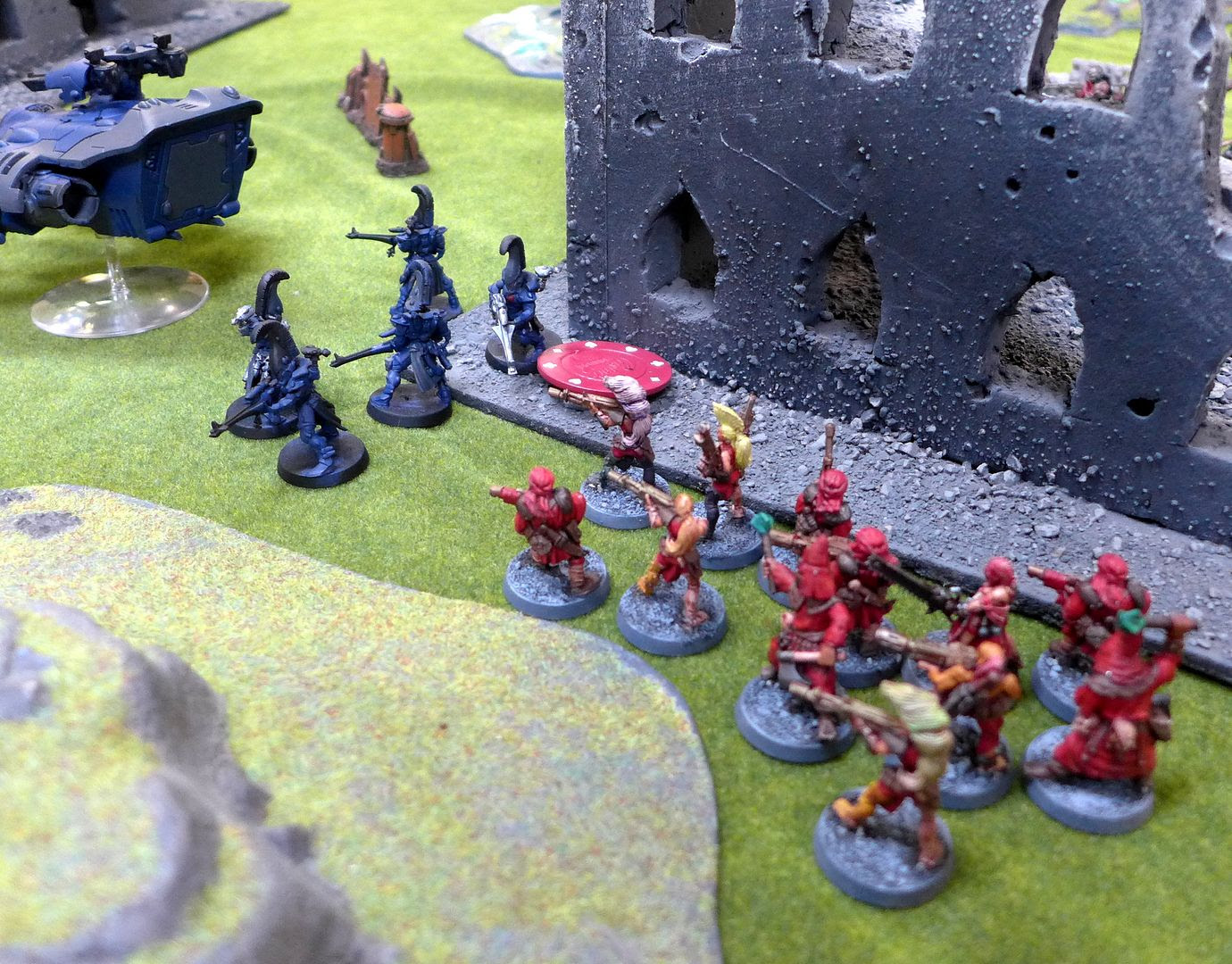 Last Wave Serpent drops off some Dire Avengers to make another play for the Relic. 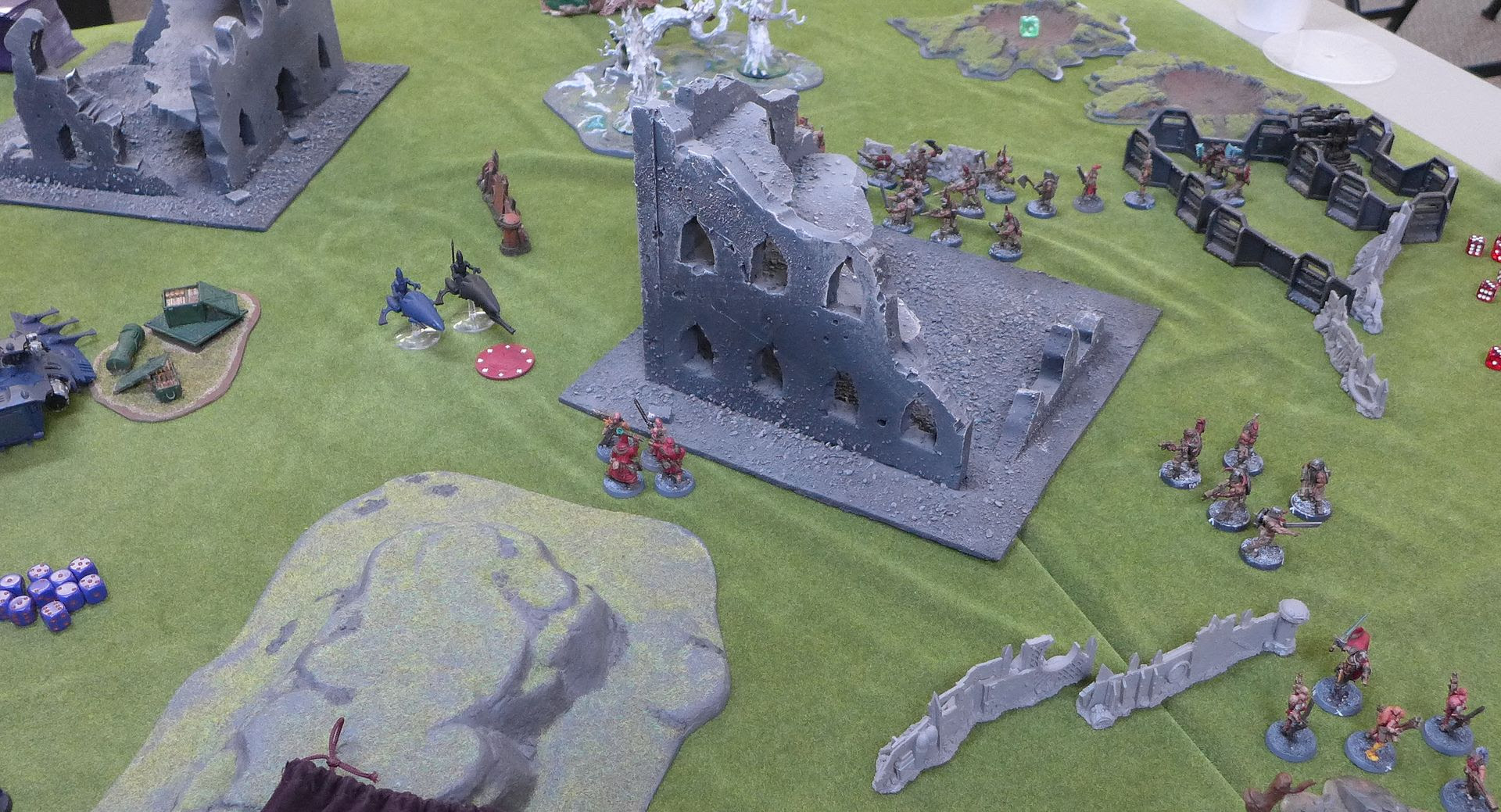 I blow up the last Wave Serpent, which helps kill some Dire Avengers.  Other shooting takes the rest out, but jetbikes move up almost to the relic, and charge into the remaining cultists.  Unfortunately the priest proves incredibly capable despite failing her war hymns check, slaying both bikers.

In the end I won off of secondaries, with some good shooting helping to take out the heavy hitters.  The Farseers psychic shrieks were also ineffective, once rolling zero wounds to the Ld7 guardsmen, failing one psychic test, and being denied on a third try.  Sometimes it doesn't pay to get off the Craftworld.

Always good to play Josh. I was expecting a much different outcome, but being able to destroy one serpent and damage the others early helped me out a lot.  With my amazing hindsight general powers, I think that he would have been better served trying to concentrate more, and maybe use the warp spiders to dish out wounds instead of trying to secure the Relic so early.  Still, I guess if he managed to get it back far enough and eventually onto a Wave Serpent it would have been hard for me to win.  Managing to break the Warp Spiders was a big turning point and broke up his momentum.

Next week hopefully the Dark Angels will take the bait and try to hunt down Astrakenor the Accursed!

Posted by sonsoftaurus at 9:41 PM