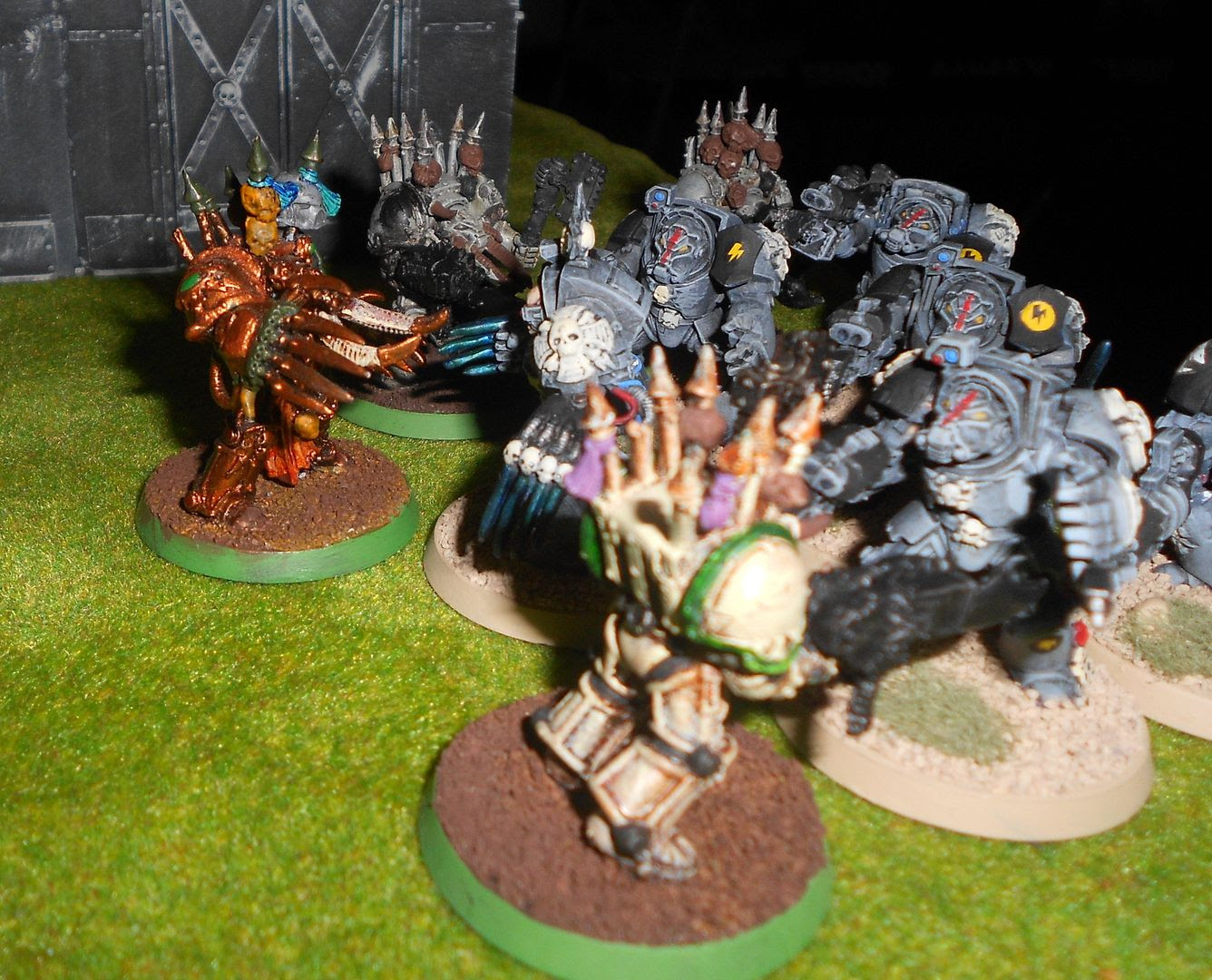 Got in my league game with Scott of My Little World of Dementia and his Chaos Marines.  Look for his version of the report soon at his site. (Edit - here it is) 1000pts, Hammer and Anvil Big Guns Never Tire.

Aside from one area of concentration, terrain was fairly sparse, with most sections only having one piece.  We made up for this somewhat with using a few rather large pieces.  Chaos won the roll to go first and chose to take it, while the Sharks failed to seize. 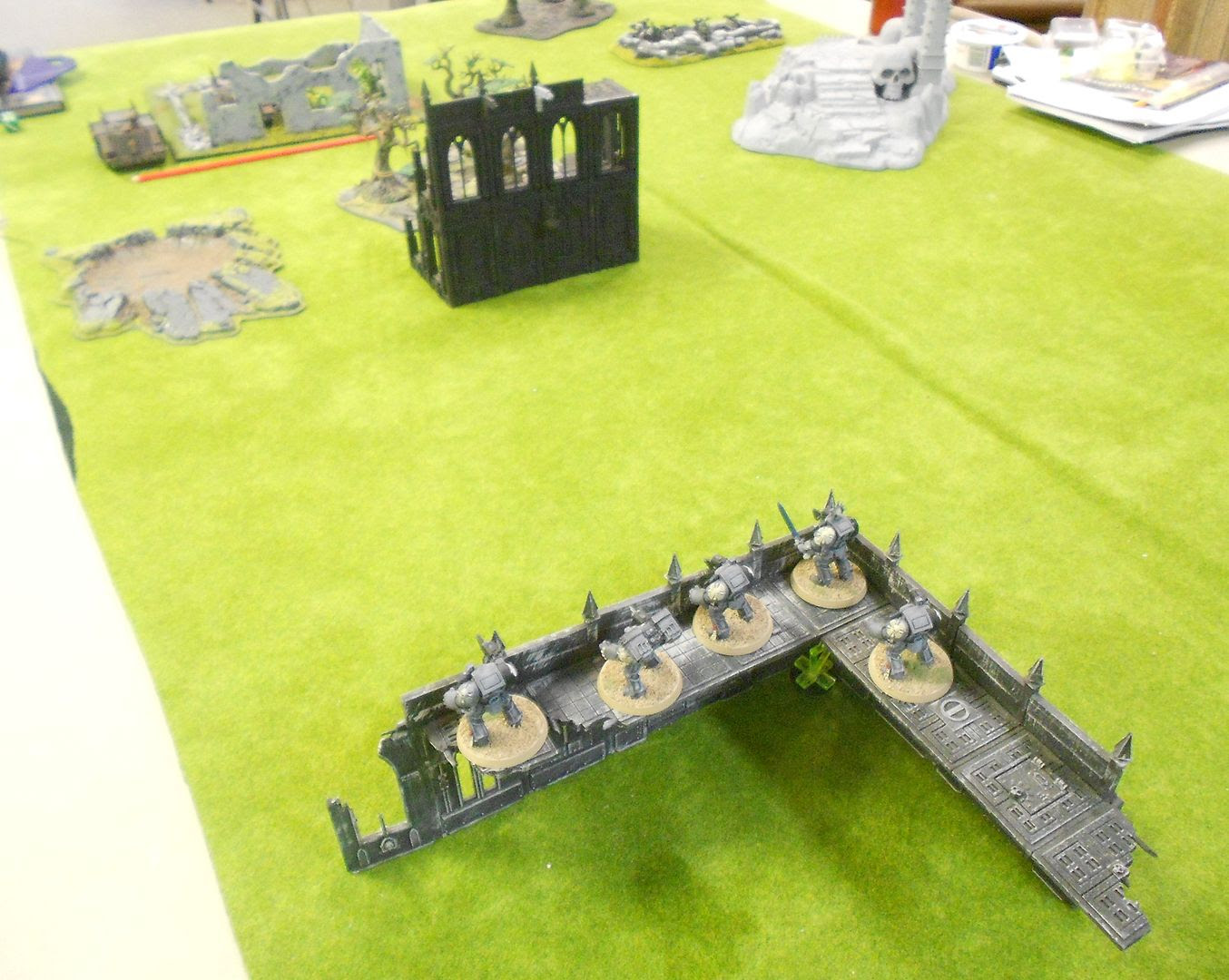 Cyclone squad sets up in firing position.  Other terminators teleporting in.  Across the field the Plague Marines set up along their start line, with terminators and obliterators in reserve. 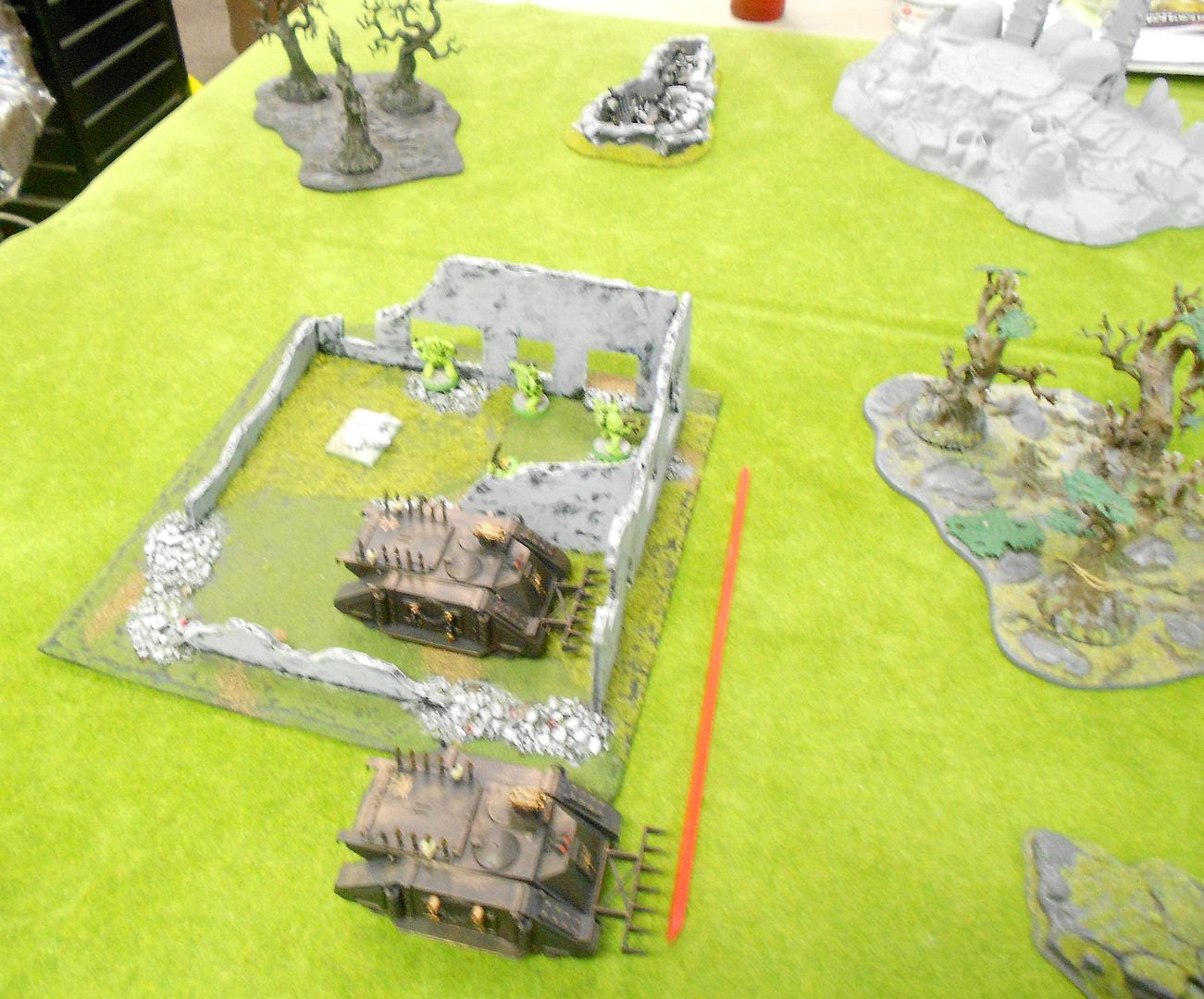 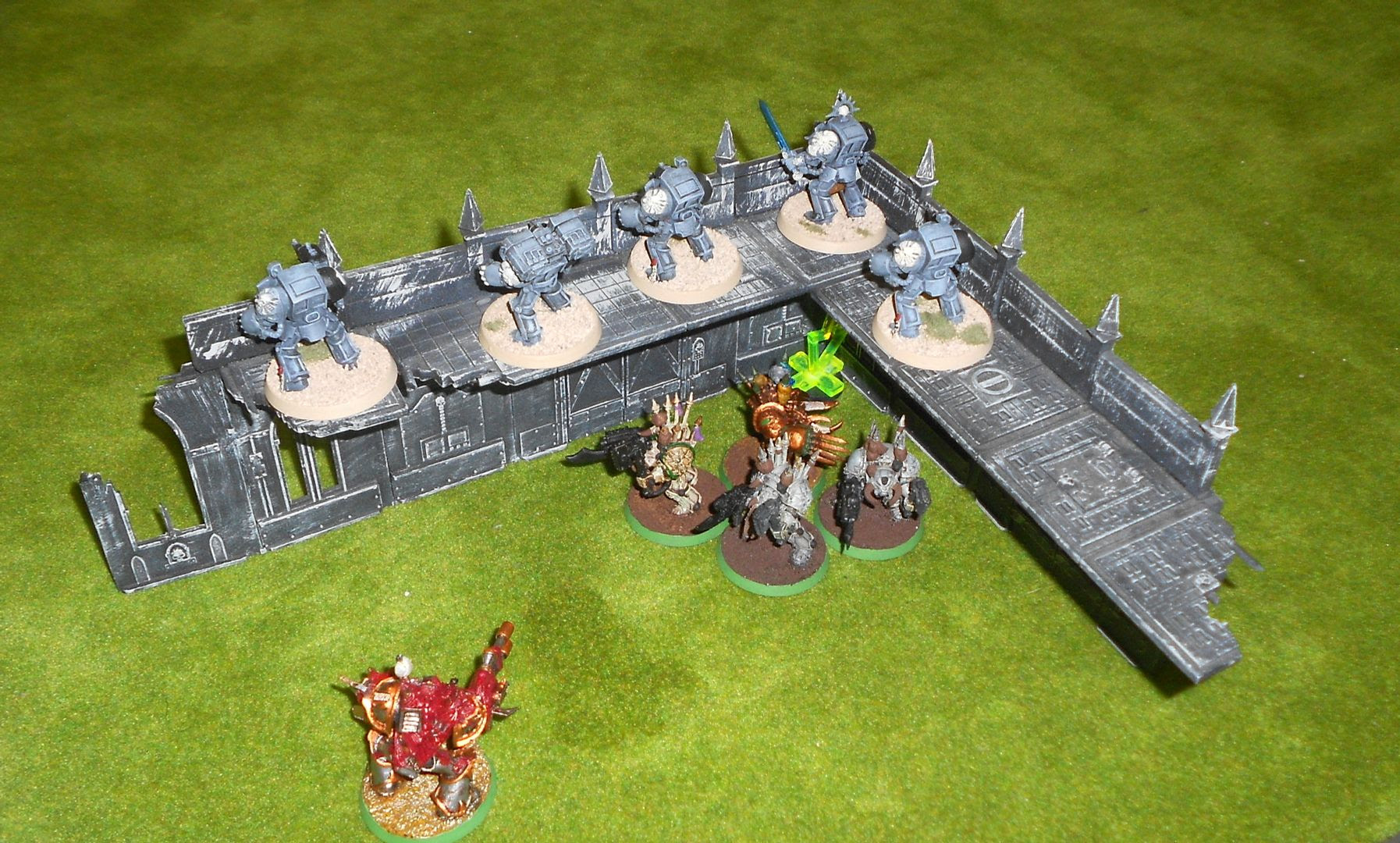 Some plague marines move forward in one rhino, and the cyclone launcher takes a hull point off of the other.  Chaos Terminators and Obliterators teleport in behind the Space Sharks.  One obliterator scatters off the table into oblivion.  The others open up on the terminators above - one dying from a thrown blight grenade, another two from the surviving obliterator. 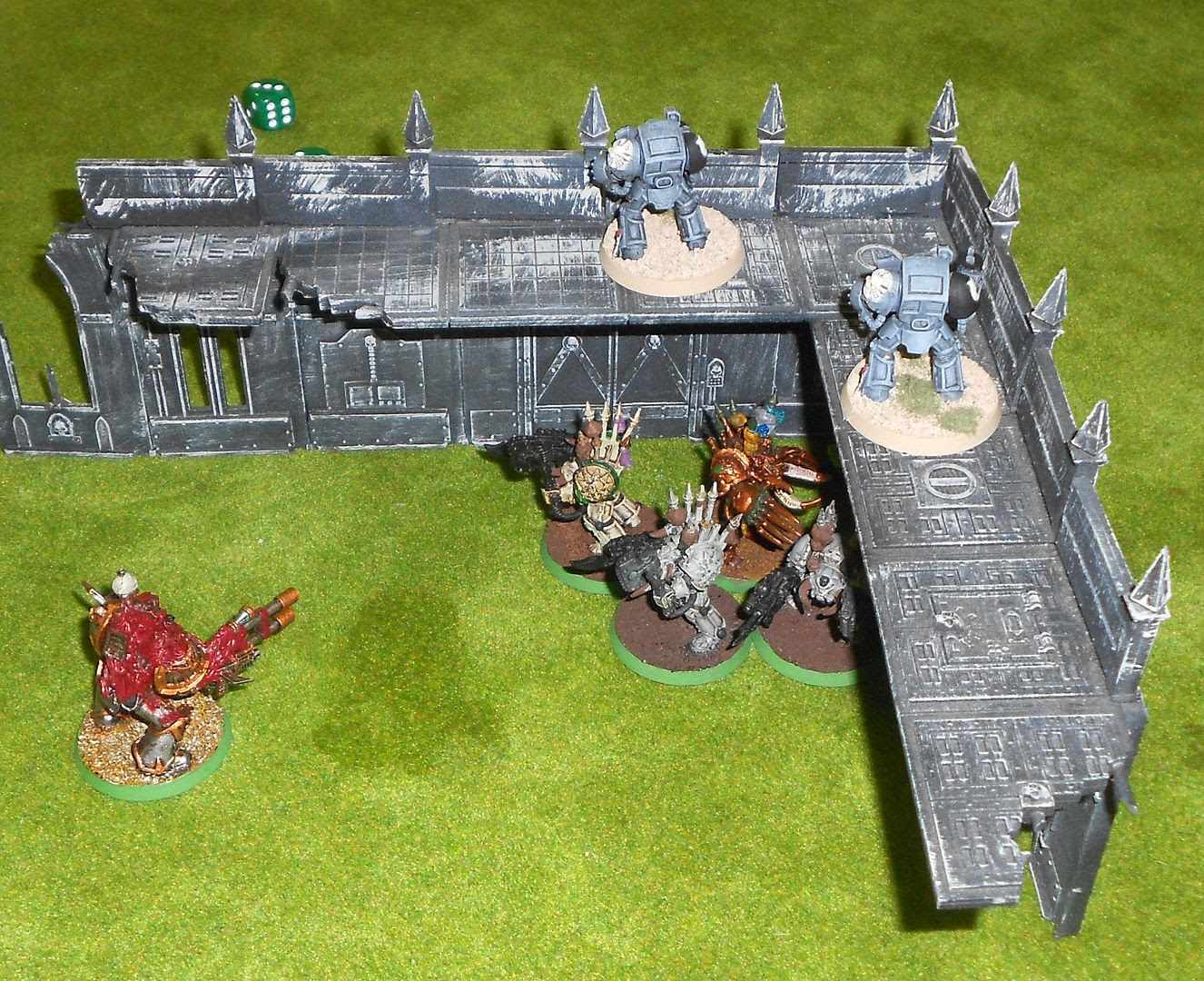 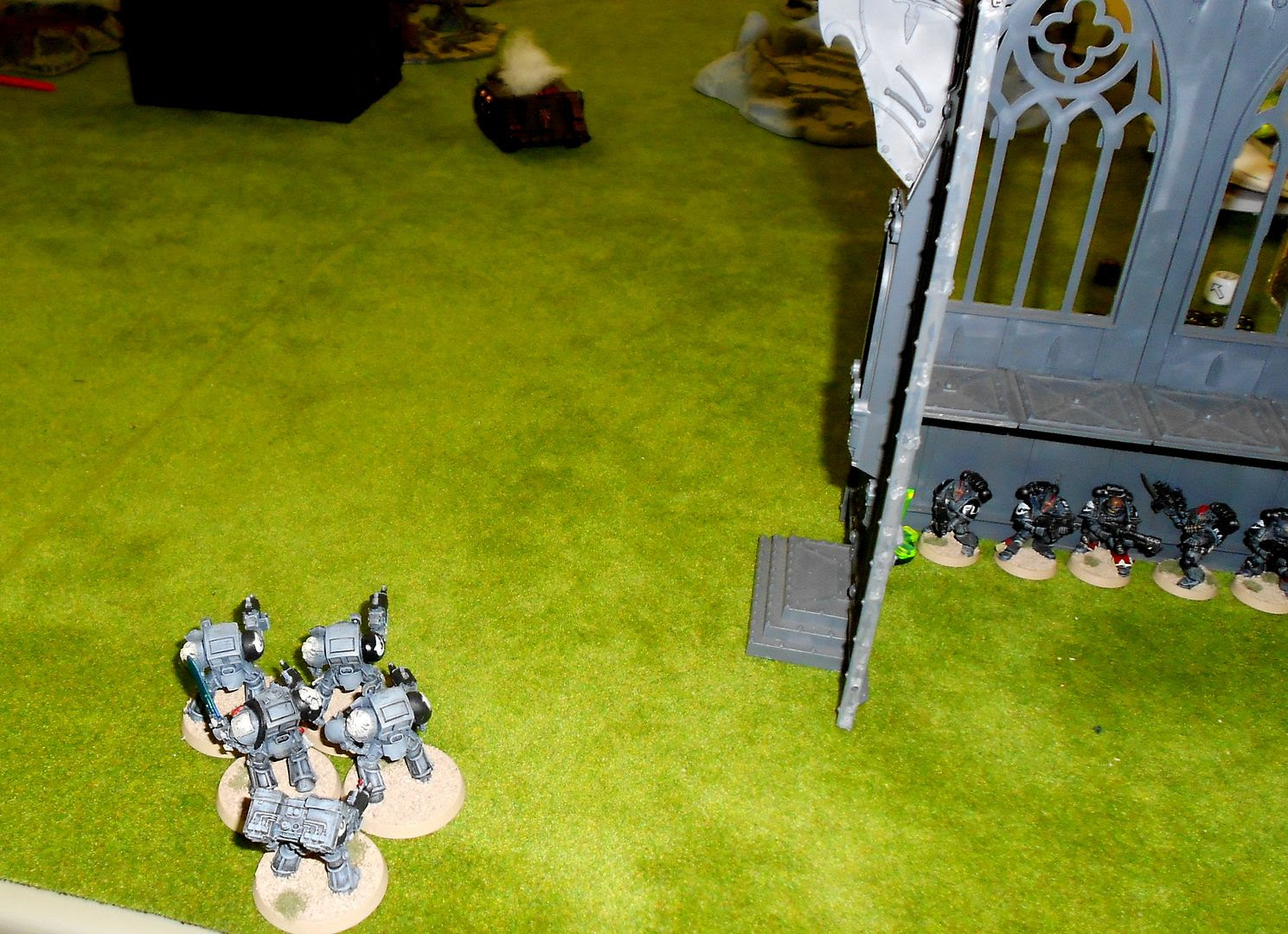 Turn two and terminators arrive - one squad shoots at approaching rhino, but bounces off. 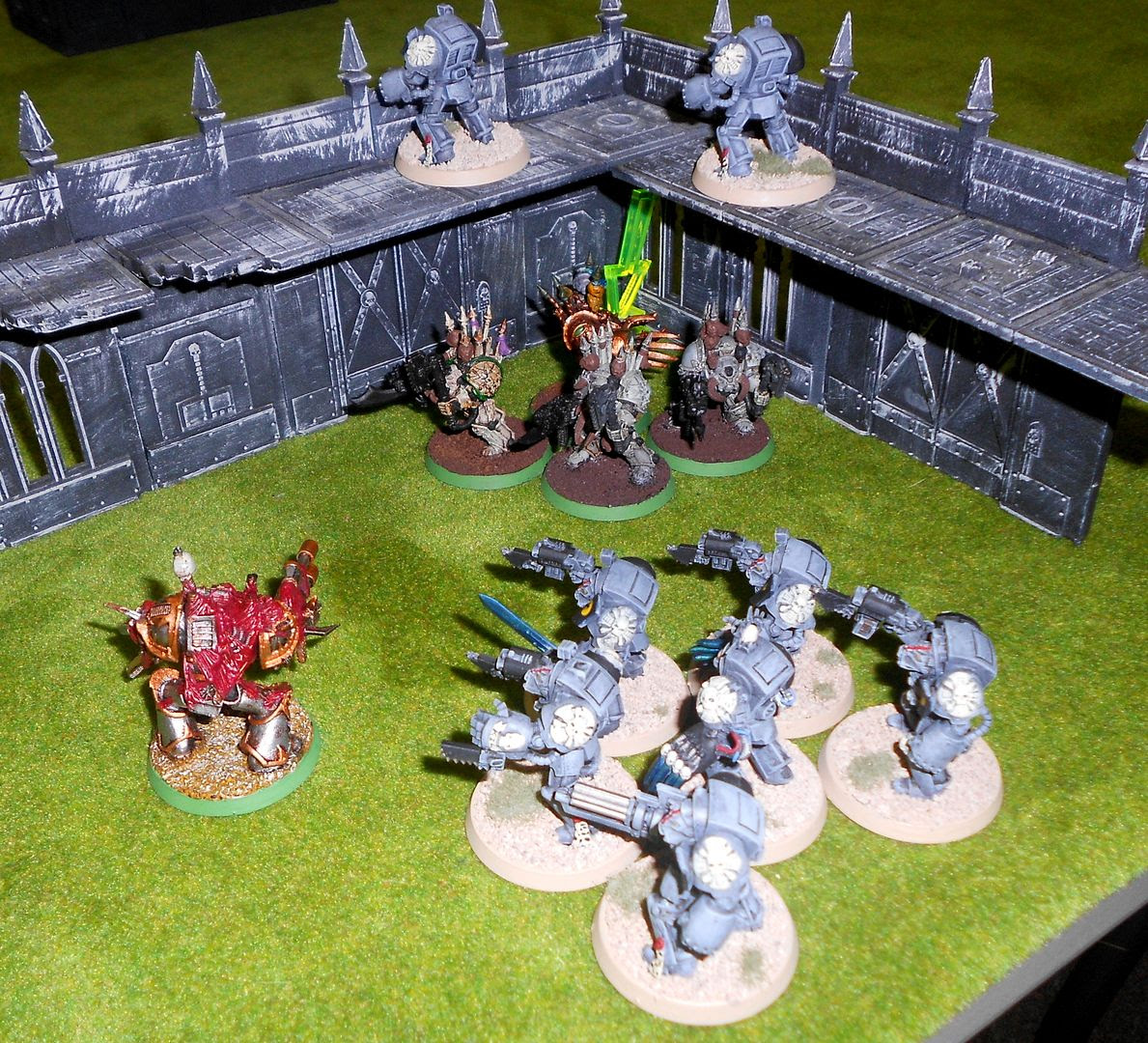 Belial and other squad land to ambush the chaos forces and destroy the obliterator. 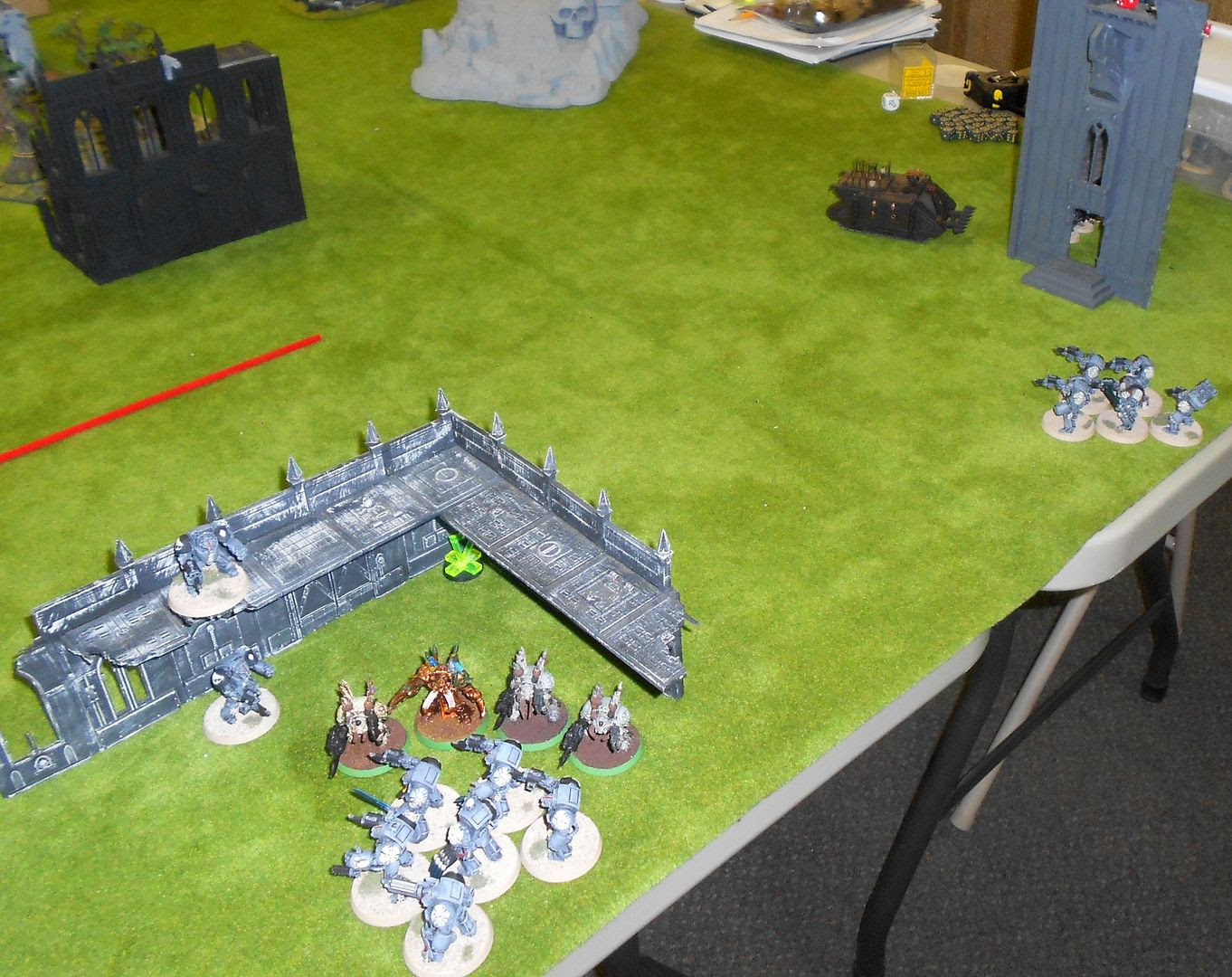 Terminators get ready to throw down as plague marine rhino continues to steam ahead.

Charge!  Chaos terminators smash into their loyalist cousins.  Belial and the chaos lord step into a challenge. 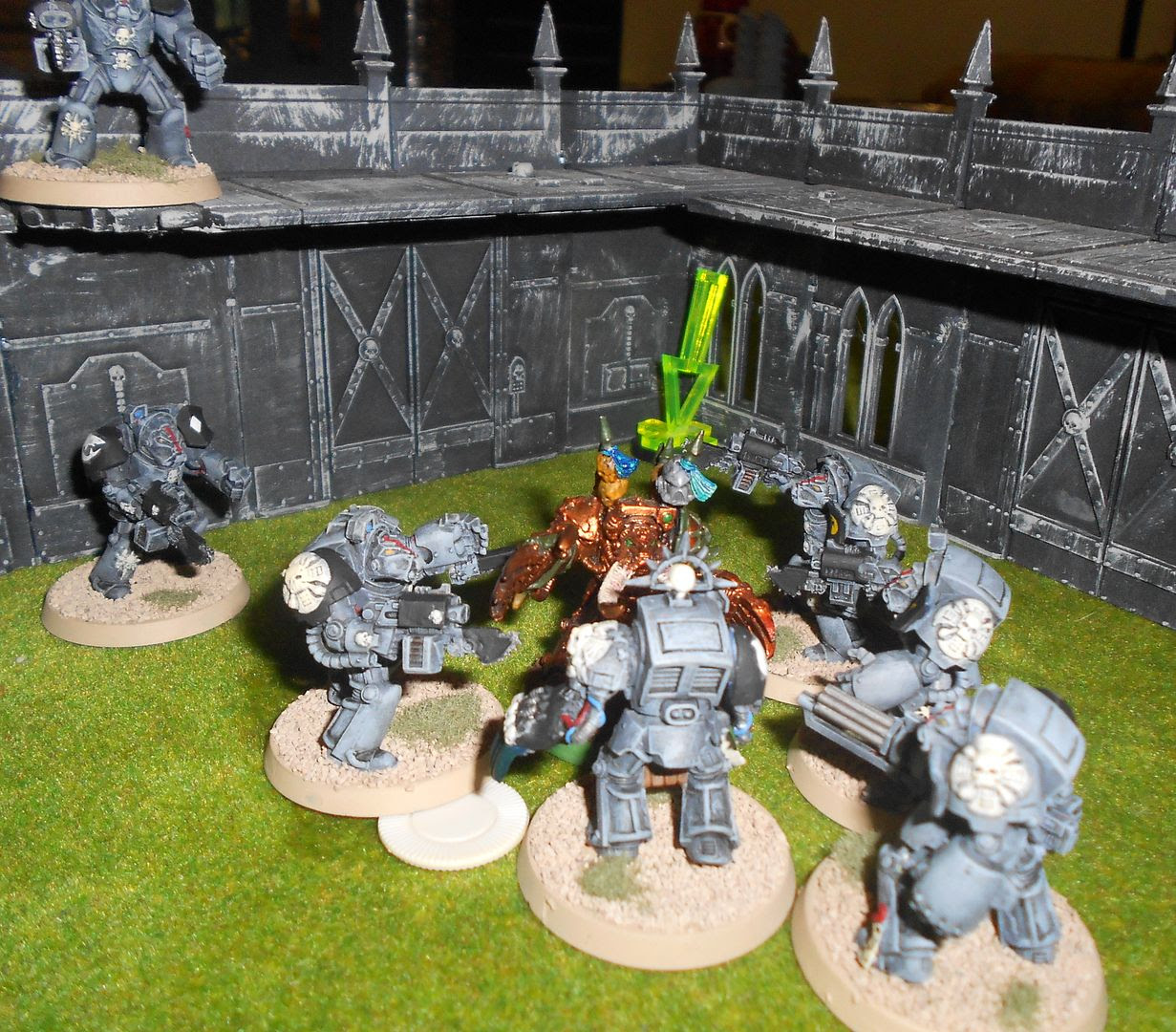 One terminator dies, Belial takes a wound, and the chaos terminators go down to powerfist hits, leaving the chaos lord alone, but relatively safe in his challenge. 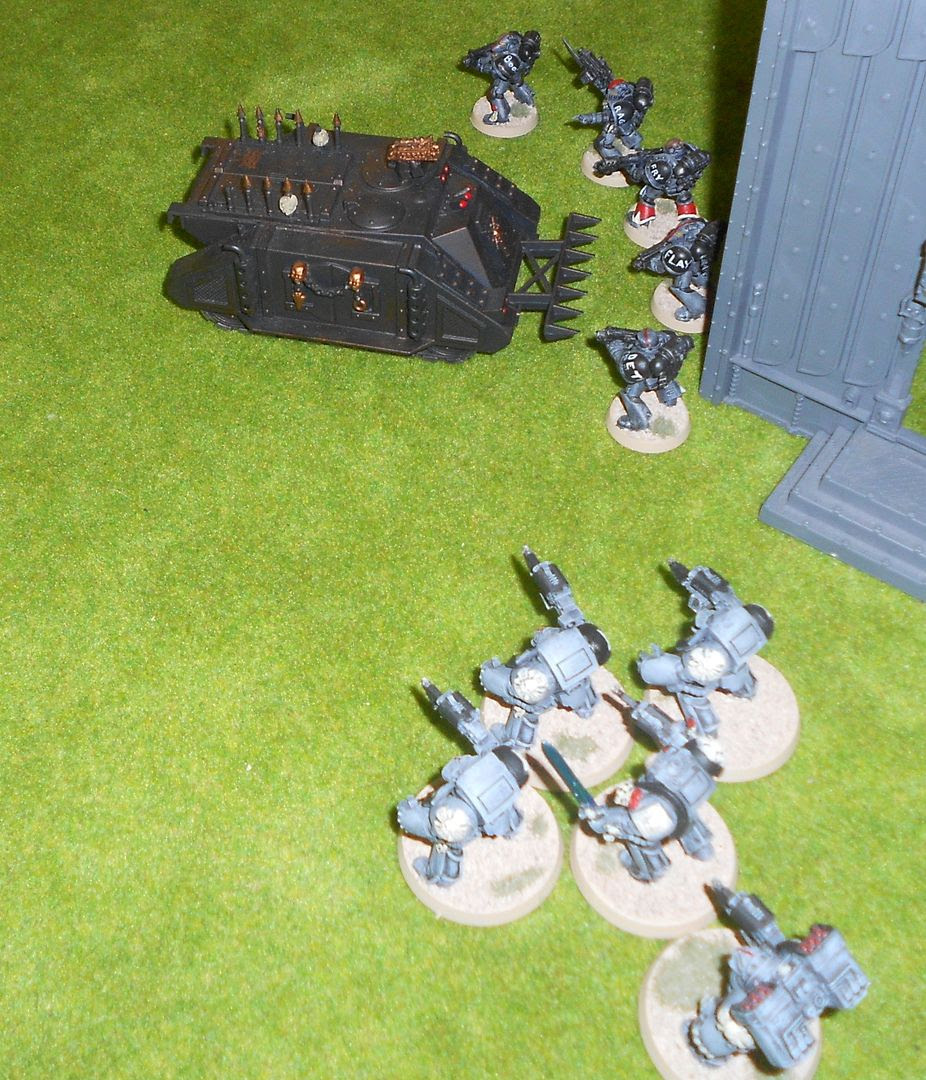 Terminators shoot at the chaos rhino, but again their missiles bounce off.  They try to charge, lose one terminator to overwatch flamers, and with 3" don't make contact.  Tac marines charge and wreck rhino with krak grenades. 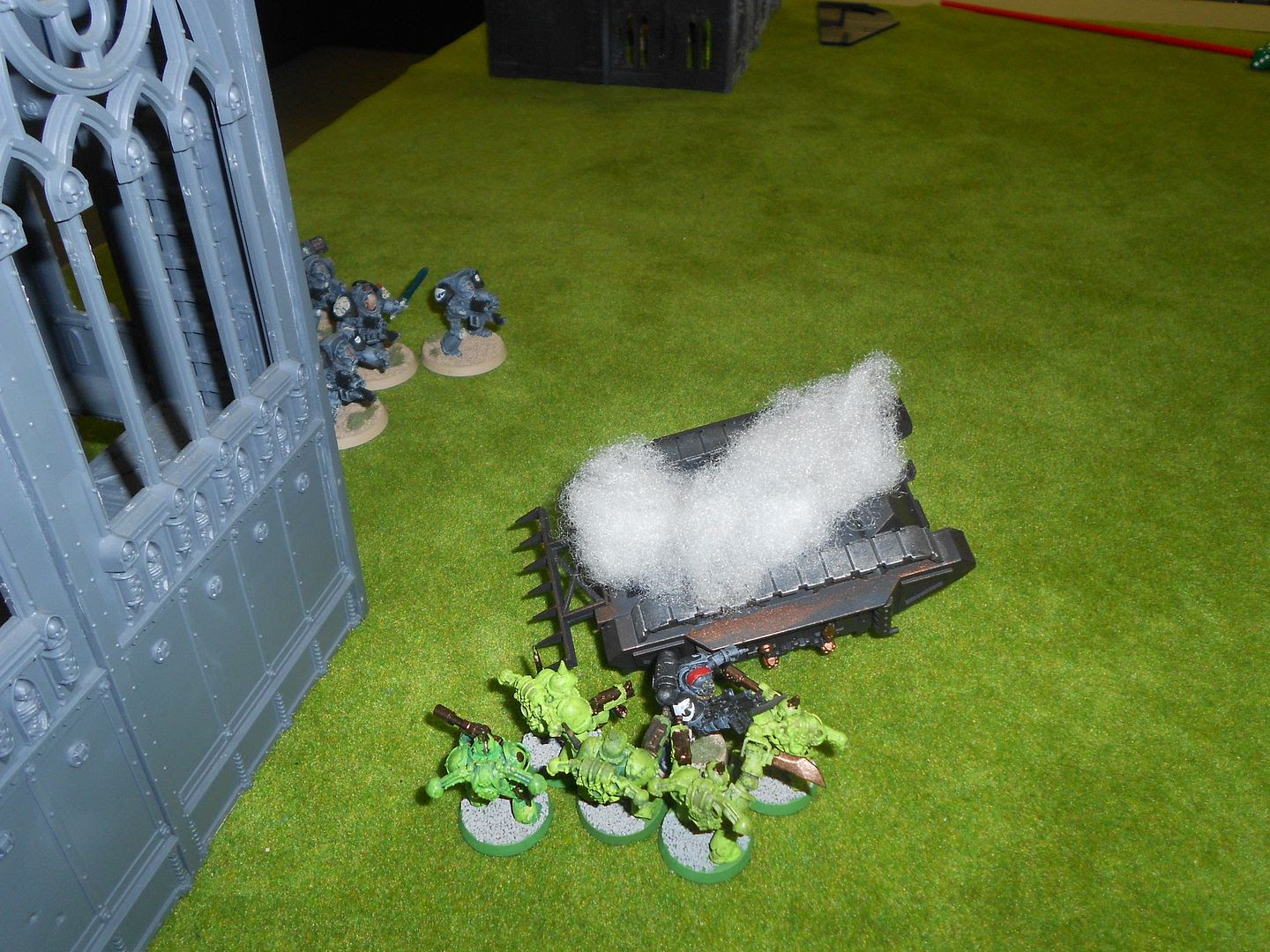 Plague marines flamer and charge tac marines.  Thinking back on it now, they shouldn't have been able to do so since they had been in their transport last turn.  The sgt. declines the challenge lest a daemon prince suddenly appear, but the rest of the squad gets wiped out.  The champion trying to chase the sgt down occupies them as the terminators approach. Terminators charge in, and mulch the plague marines. 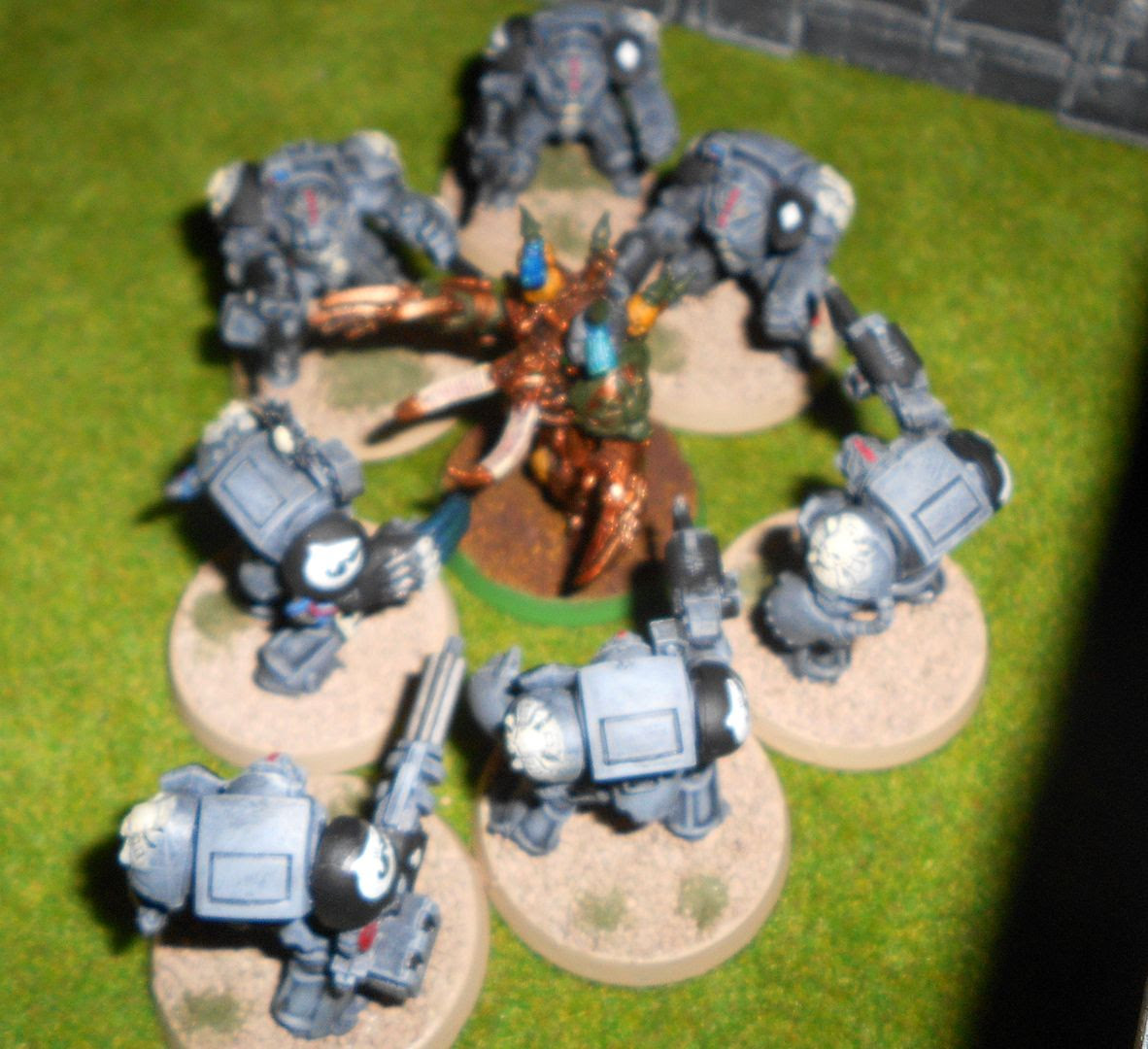 Meanwhile, the two-man terminator squad has joined the fight with the lord, getting Belial a re-roll.  In hindsight, I would have been better off just having them hang out over at the objective (and declining the challenge in the first place!). Other terminators fresh from killing plague marines move towards the scrum, as the tac sgt moves back to cover his objective.  The lightning claw duel continued to drag on, AP3 weapons vs. 2+ saves.

The close combats were nasty, with his Veterans of the Long War fueled Hatred and my Inner Circle fueled Preferred Enemy.  Preferred Enemy on power fists is brutal.

Reminders from this game: 1) Remember the mission!  2) Challenges is a very poor, easily manipulated mechanic.  Don't get caught up in them even though they'd be "cool".  3) Concentrated terminators work better than scattered ones.

I think Scott had a good plan dropping everything where he did, but paid a price with the one oblit's bad scatter.  If both oblits had stuck the landing it would have been rougher over in that corner.  Where I think he made a mistake was not sending more plague marines forward.  He could have used both rhino squads to advance and left the footslogger to hold his objective, especially once all my deep strikers had arrived.  He probably wouldn't have been able to kill the terminator squad helping the tacs, but he could have had a better shot at contesting the objective or pulling all my guys away from it.

Close game, and as always entertaining to play against Scott!  We had some good CSM chat too, and I look forward to hearing how his 1250pt list (Fabius Bile and a 20-man pimped out enhanced CSM squad) will do in the next rounds.
Posted by sonsoftaurus at 9:26 PM