We have met the enemy and he is primarus 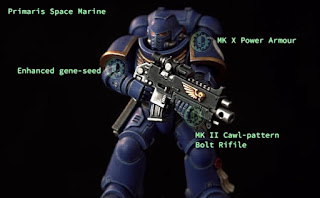 So these guys are coming.  Upgraded Space Marines, bigger, better, with better gear.

From a background standpoint, this is a huge can of worms being opened.  Some of the worms I can see resolved more easily than others.

Developed in secret for 10,000 years?  I can maybe see that with the AdMech.  Perhaps Guilliman made Cawl program himself to not reveal the project until Guilliman told him to, and then G goes into stasis for a few millenia.  Oops.

How will the other Space Marines react to being the old model?  I wonder how many remember stories about the Thunder Warriors. I would expect for there to be significant friction between these new marines that are added to existing chapters and between older chapters and these new Primaris foundings.  This could be an opportunity for a lot of interesting storytelling as the Grimdark reasserts itself, but I doubt they will go down that route. 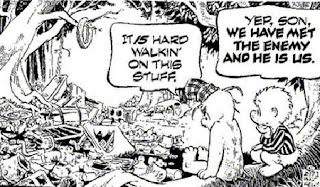 New foundings of Primaris Marines.  How exactly does that work?  A whole unit of rookies?  When they found chapters, don't they bring in leaders from other chapters to run the show for the first generation at least?  Are they going to have old marine chapter masters, captains, chaplains and such and Primaris line troopers?  Or somehow enough of the Primaris have distinguished themselves enough to immediately go to leadership roles, even without experience?  Again, could be fertile ground for stories, as the theoretically elite run into problems with a lack of practical experience to draw on.


Logistically, it seems like a nightmare.  Different armor that all the old chapter serfs and techmarines don't have experience with, weapons that will require different maintenance and ammo, troopers that may have radically different physiology that Apothecaries will have to adapt to.  Will they need different drop pods, transports, etc.? Why not just take all this effort spent on this project and just make a few hundred extra chapters of old marines instead?  Or why not just give all marines the new bolt rifles?  There are bound to be logistic chokepoints and problems.  To an extent this feels like some of the 1980s toy/tv show combos - manufacturer is coming out with new toy, you guys figure out how to feature it in the show.  Yeah, I know the other guys are robot cars and these are robot dinosaurs.  Make it work.

Chaos.  So, Guilliman broke the legions into chapters to limit the power available to any one commander, then forms chapters that are more powerful than the old ones.  And at some point, someone will say the Primaris aren't bound by the Codex restrictions on size.  Some of these guys are bound to start falling to Chaos, creating problems for the Imperium, and another layer of narrative issues as super-renegades start muscling their way around in heretic circles.

Speaking of Chaos, this really makes Fabius Bile look like a chump.  He's been struggling to make better marines all this time, while Cawl had done it already and was just waiting to pull them out of the drawer.  And other experiments like the Cursed Founding went on to disaster while Cawl already had succeeded?  Or perhaps that will be retconned into being part of Cawl's project, with the final perfecting of the process happening afterwards?

I could see them doing a lot with these guys that could be interesting, but I doubt it will happen.  Of course they could surprise me and explore these things or handle them in a different way that works.  It's still early, we have just had a brief reveal, as more comes out some of the holes may fill in.

Despite all of my trepidations narratively...gosh those guys look nice.  And with heads and pads being the same size, they could be beakies, or altered with a multitude of alternative heads and pads, both GW and from other companies.  I look forward to seeing the primaris versions of assault marines and other things.  I'm tempted to start a force of primaris, one of these brave new chapters in a Second Great Crusade.  I expect to become part of the "problem".
Posted by sonsoftaurus at 10:40 PM