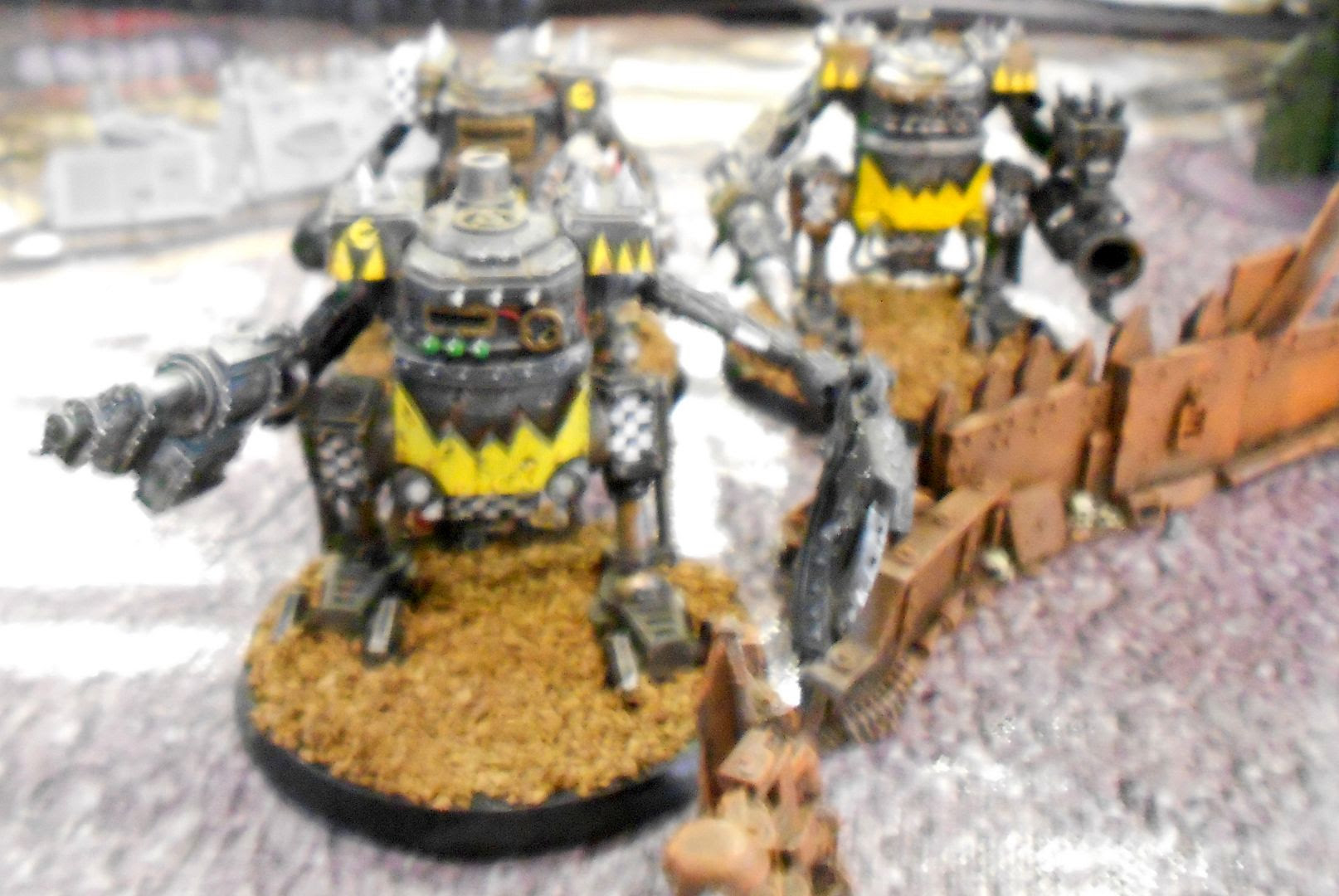 Campaign day down at Gaming Underground.  I was able to stay longer today than normal, and got involved in a variety of games.

First up, campaign game that counts towards last round, 750pts vs. Space Wolves so Eric can get a game in as he was out of town last weekend. 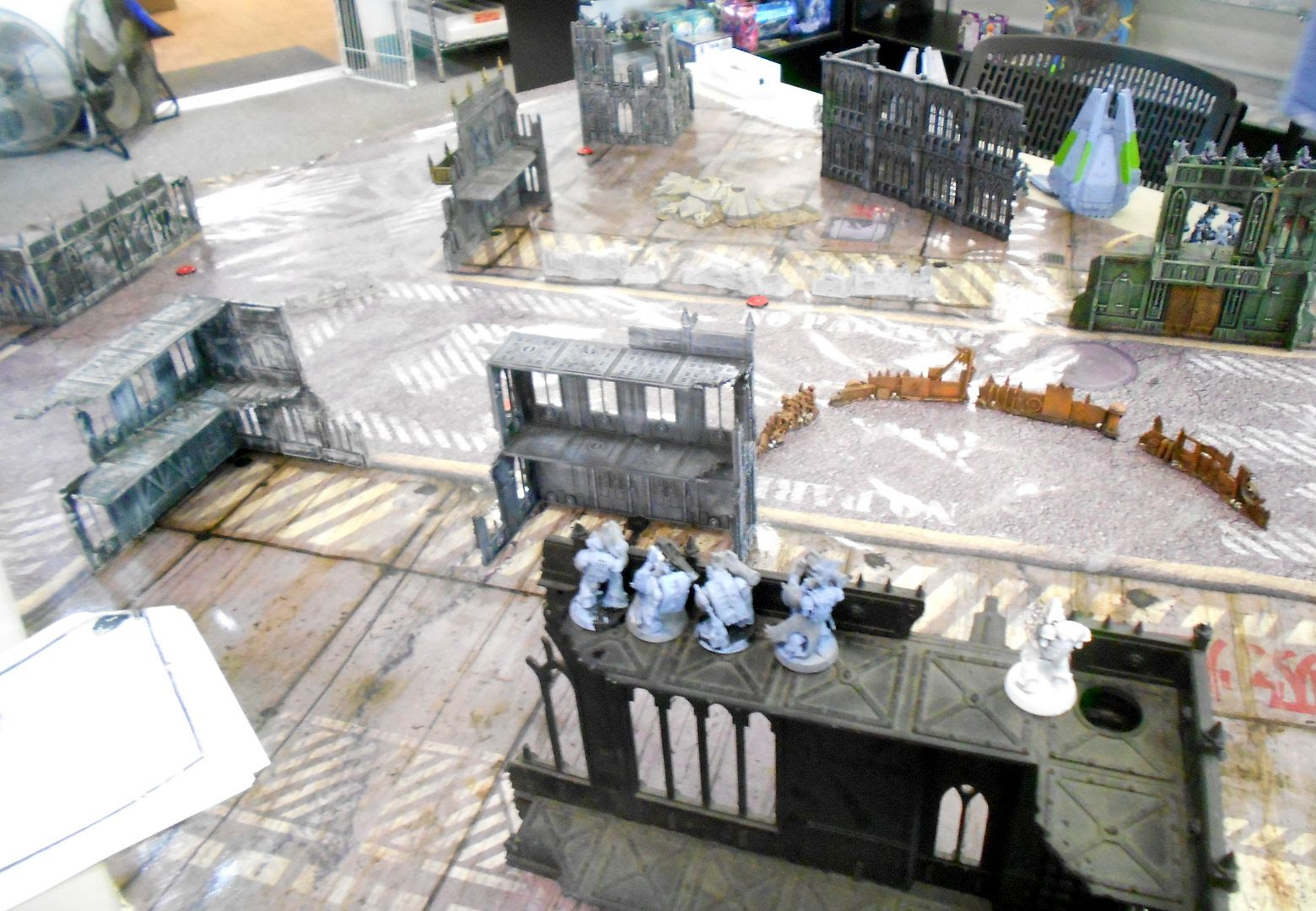 Eric's army was three drop pods full of wolf guard with combi-weapons (and Logan) and one pack of long fangs with missile launchers.  I put ranger squads up in some buildings (top right, top middle) and had two d-cannons behind the ruin top left.  Rest in reserve to try to limit drop-pod alpha strike effectiveness. 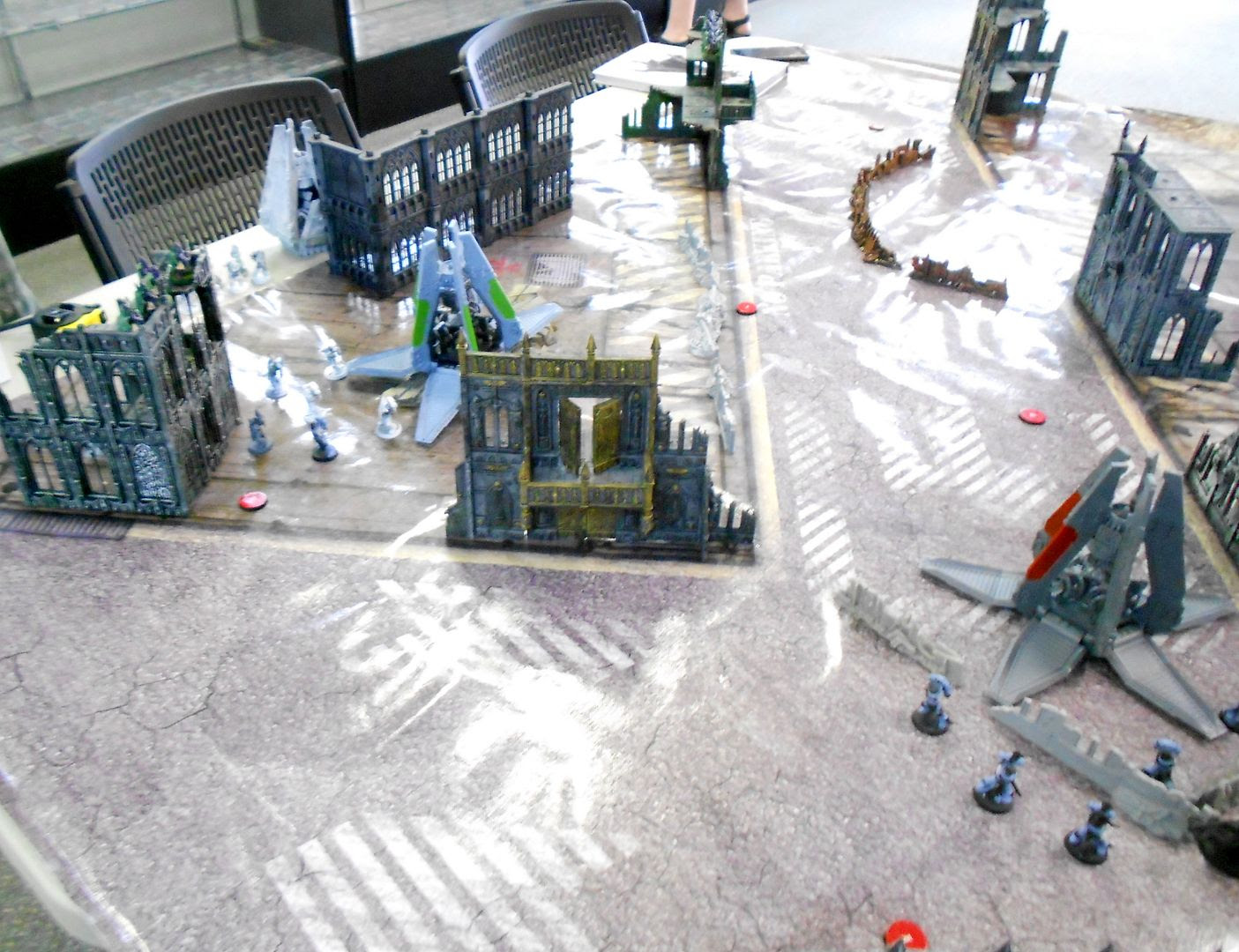 First pods come down, one by a ranger squad, the other with Logan on the right in the middle of the road to tackle the d-cannons. Long Fangs meanwhile get four on-target frag missiles and wipe out the ranger squad closer to them. 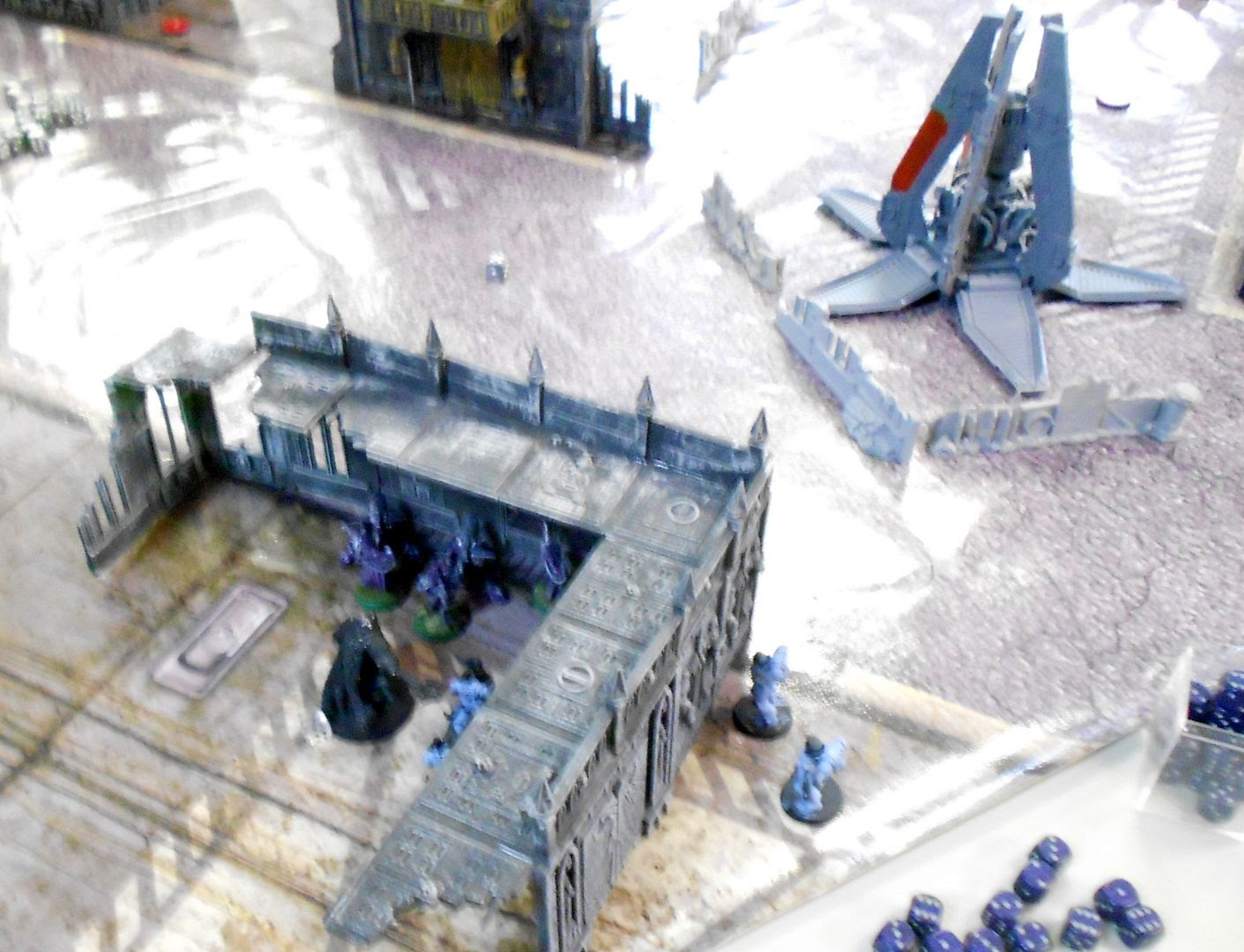 D-cannons shoot at Logan's squad hoping to get lucky and send him off to the warp, but he bats the shots aside, only suffering one wound.  He and his squad move in and charge the cannon crews, chopping them to teeny little eldar bits. 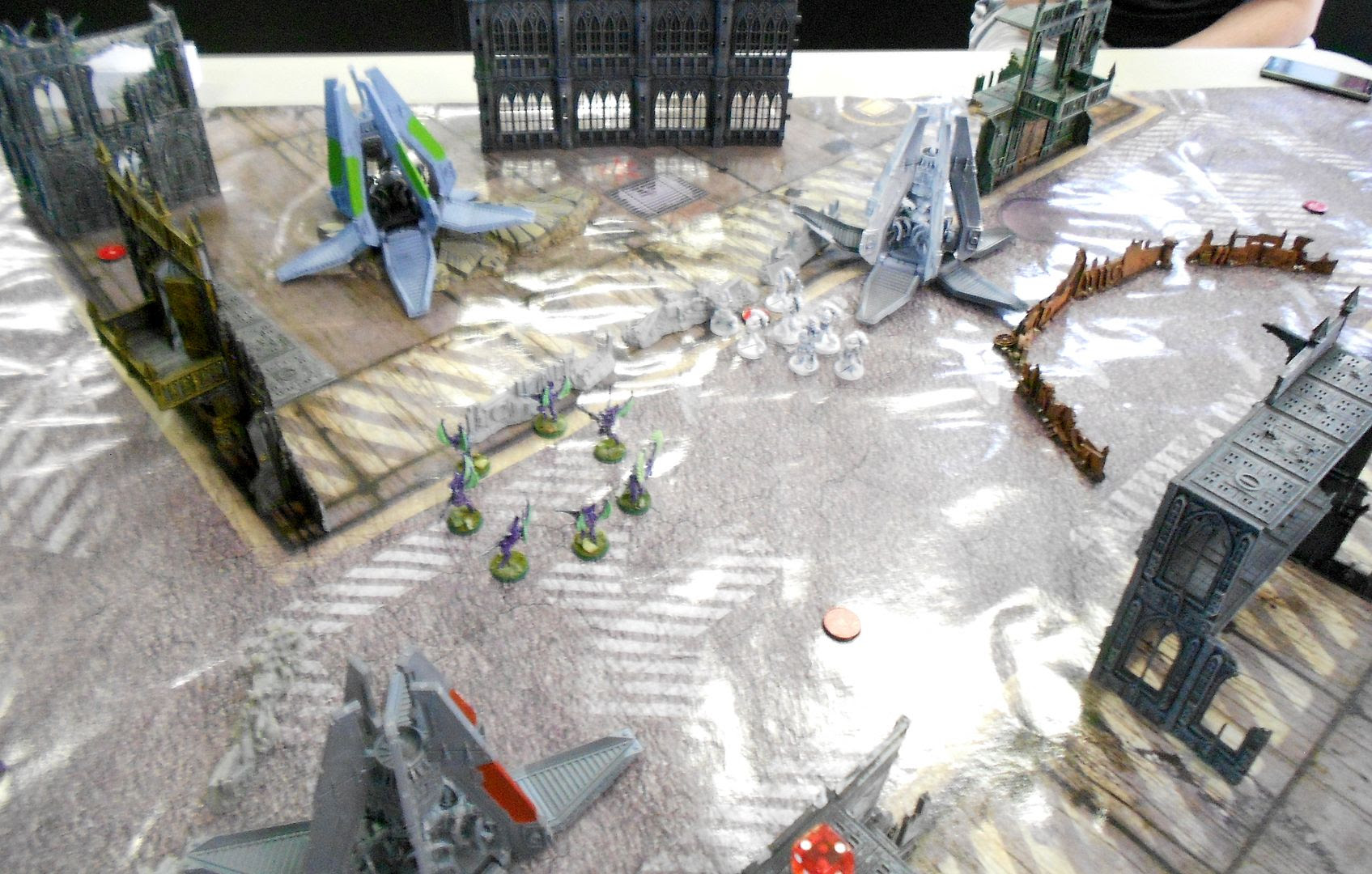 Swooping Hawks land, dropping grenades on Logan, who ignores them.  He's not so resilient to lasblaster fire it turns out, failing two 2+ saves out of three and keels over.  Third pod slams down and helps shoot the hawks up a bit, who skyleap back up in my turn three. 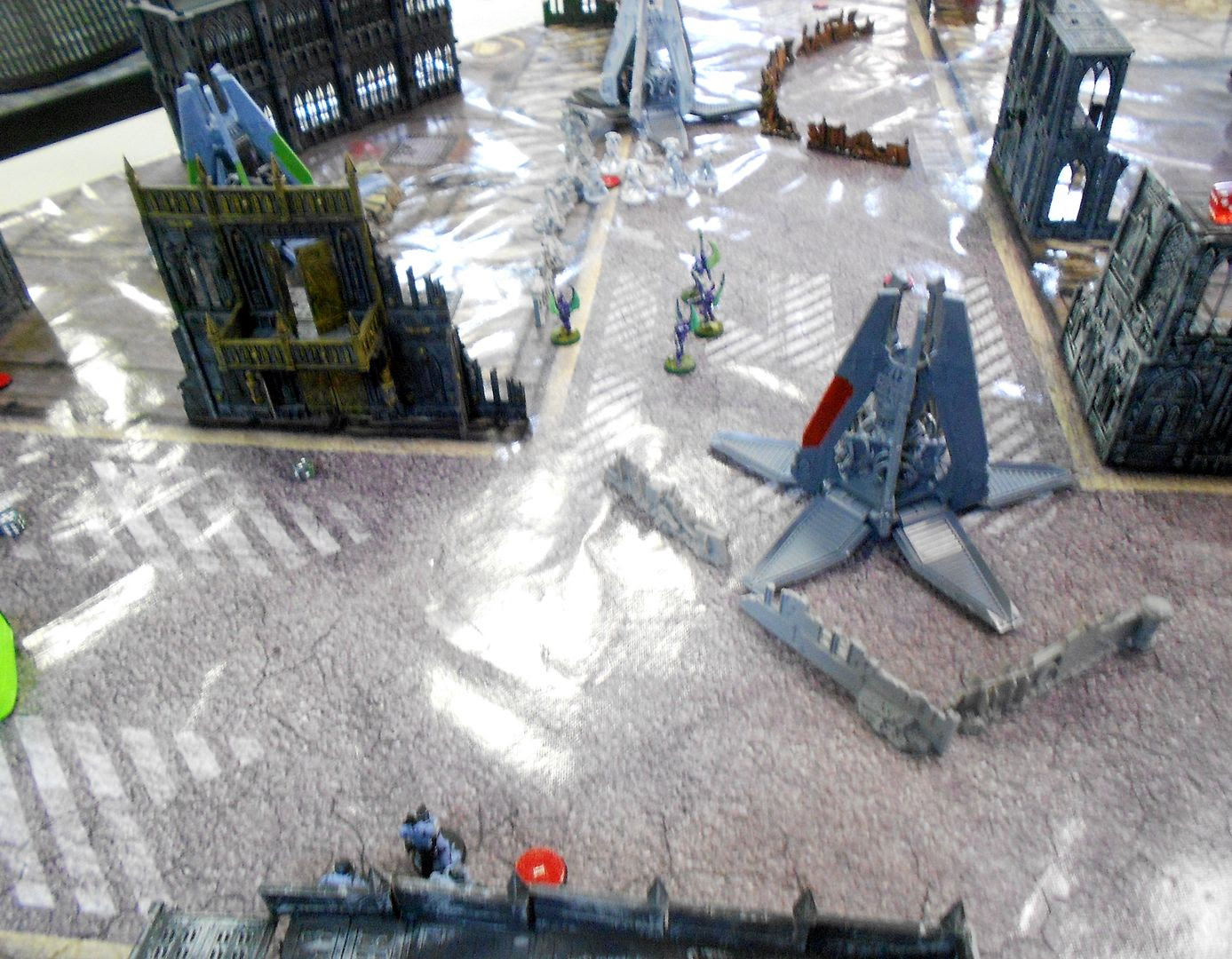 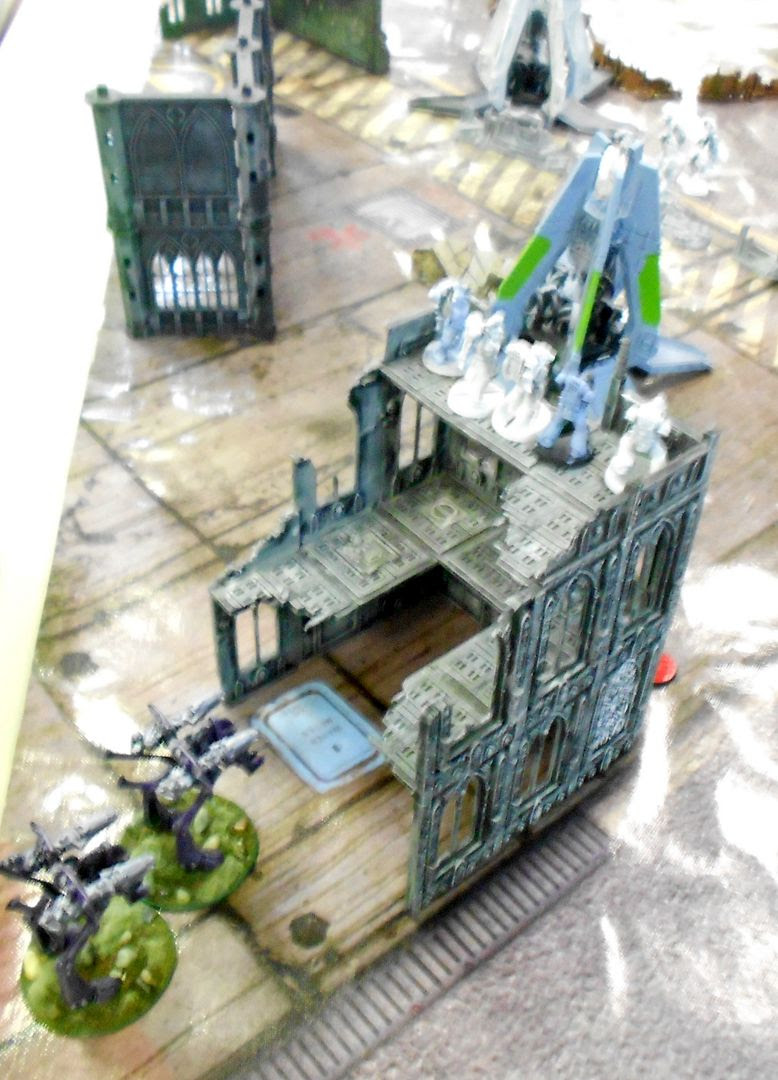 Warwalkers come in and start shooting up wolf guard who had recently dispatch the second ranger squad. 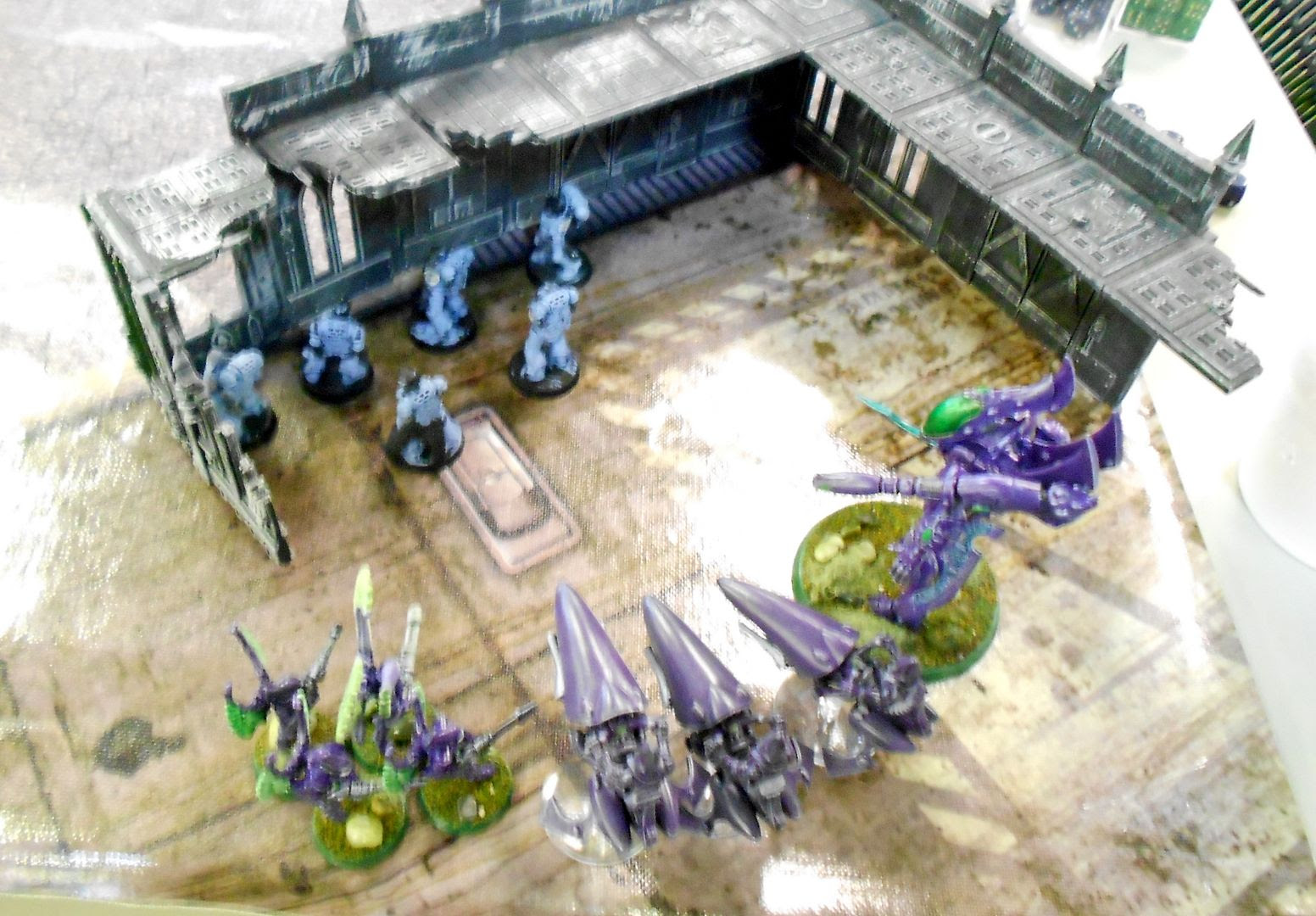 Hawks return turn 4, along with bikers and wraithlord and combined they lay into Logan's old squad. 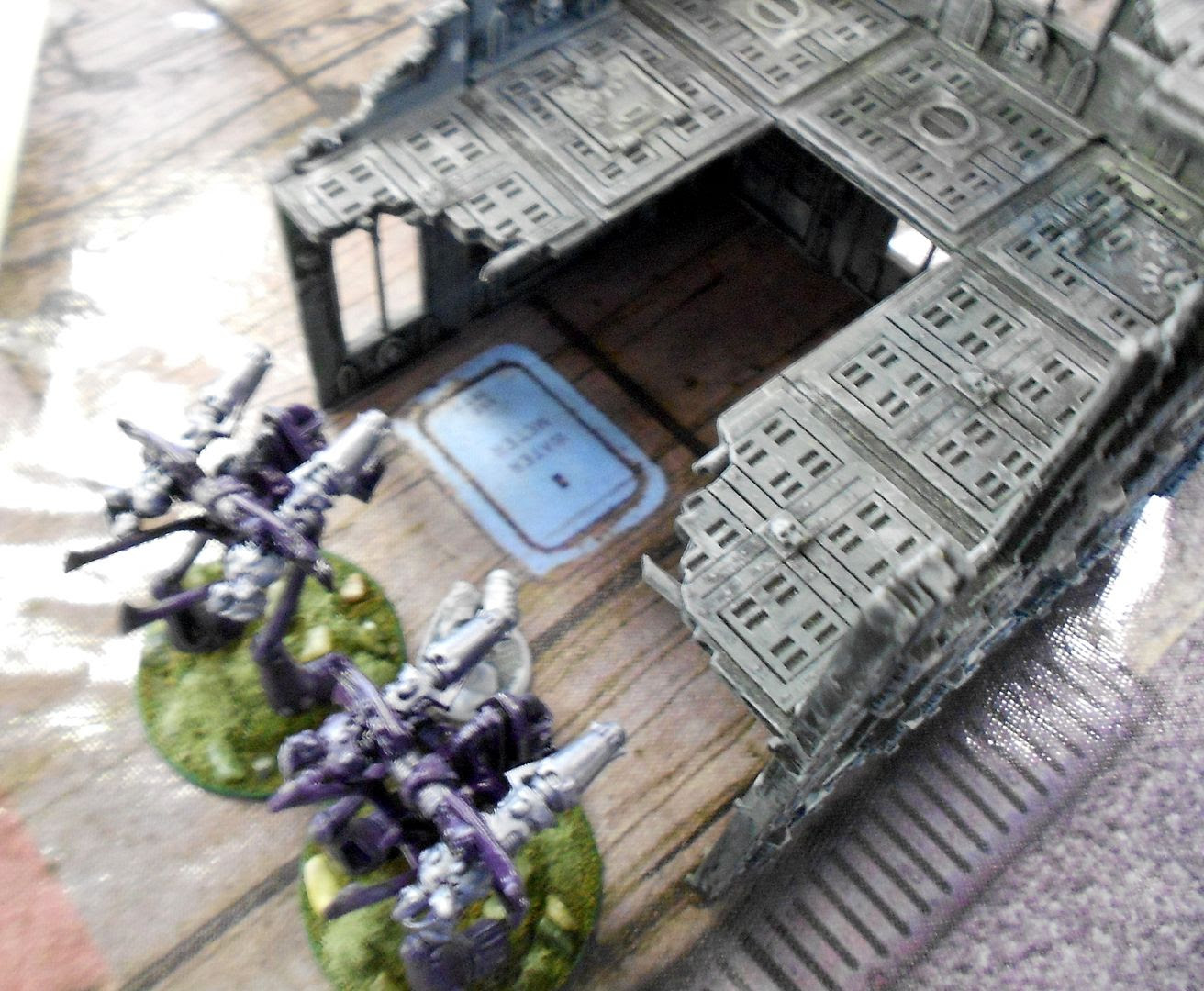 Two wolf guard make it to combat with the warwalkers, but over two combat phases both get stomped to death. 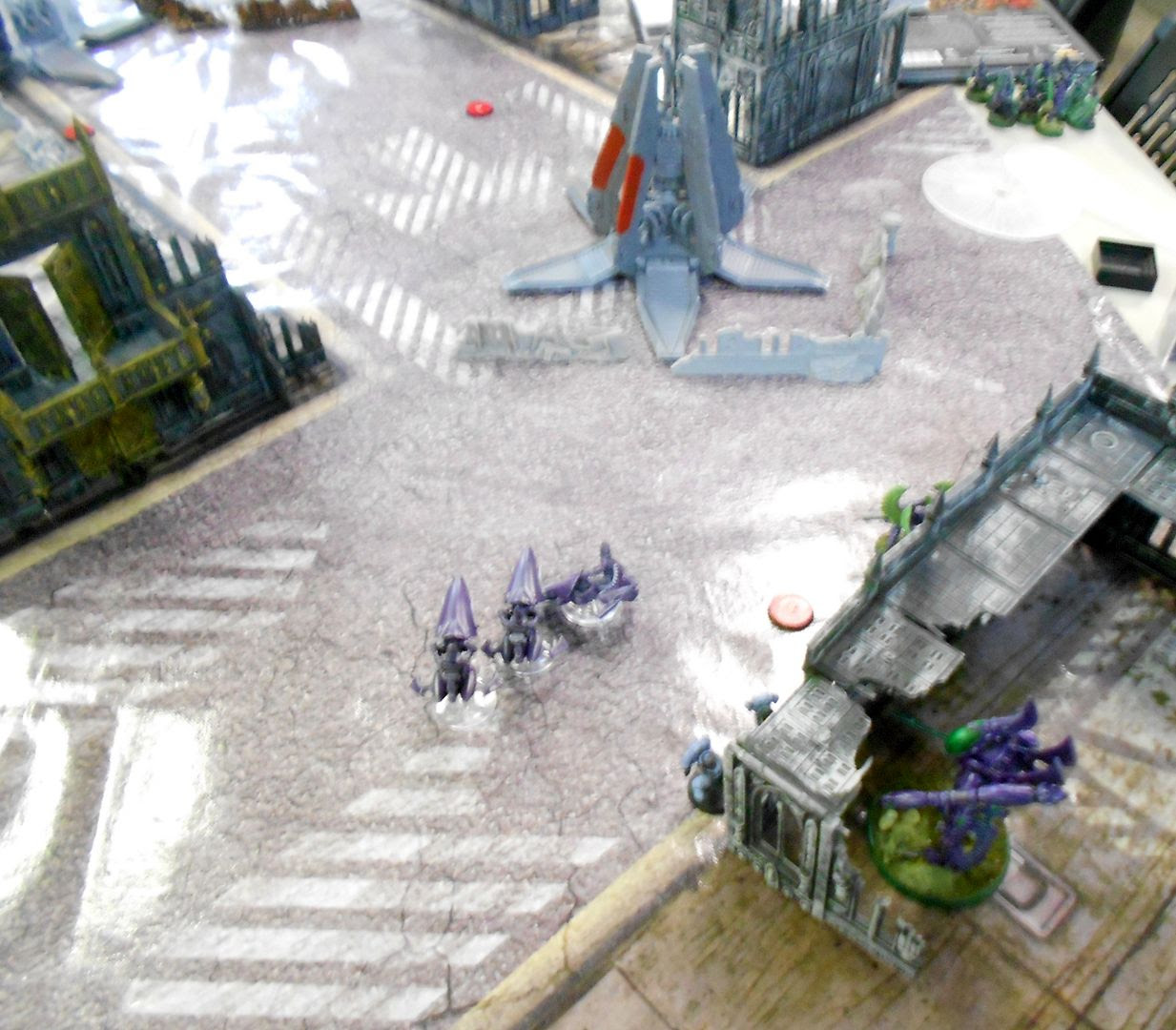 The wolf guard moved outside to try to get away, but the eldar follow and finish them off.  Rest of the game is destroying some drop pods and claiming objectives.  At the end of the game I have the primary (objectives), the secondary (old-style victory points), slay the warlord and linebreaker from a striking scorpion that managed to survive and  lurk underneath the long fangs.  Eric had first blood so was not totally shut down.  With poor reserve rolls, it was a close run thing that I wasn't wiped out turn two or three before the rest of my force arrived!

Next I got in a game with Steven, a returning player who hadn't played in several years, skipping all of sixth ed and then some.  He brought some Orks and a list he had cobbled together with the new codex.  I took the eldar list I had planned for the campaign turn, less my "free" Grand Warlord.  Since it was a learning game I didn't monkey around with reserves, and just set up and waited for the orks to arrive.

And come they did!  A little cautiously at times, which let me fall back ahead of them and keep shooting them up.  His trukk-borne units and koptas swept my left flank away but arrived in the center mass piecemeal and my shooting and wraithlord took them out in turn.  If he had been able to concentrate his forces a little earlier or had rolled better with some things like his loota shots it could have gone differently, even with his unfamiliarity with the new rules.

Third game was against Vinnie's Tyranids for a special campaign game where we were paired up randomly (well, semi-randomly after some adjustments for scheduling were made) against another player fighting for objectives with secret values (each had three objectives, two worth one point, one worth three, you secretly decided which of your objectives was worth three). 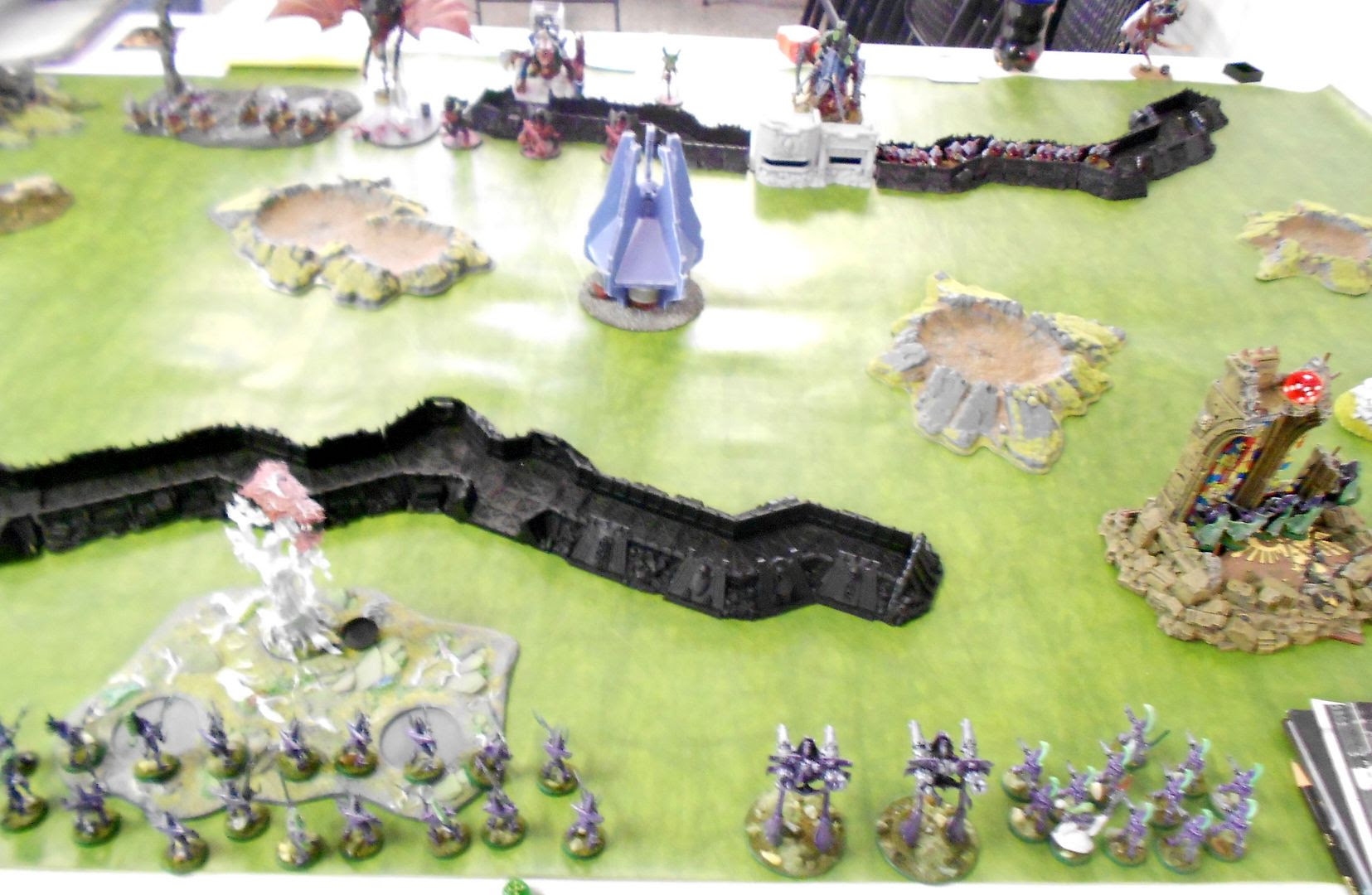 I left some of the eldar at home and brought in Duke Sliscus and a big kabalite warrior squad to help vs. the big bugs.  I was worried about his firepower, especially the hive guard so deployed far back for the most part.  After seizing the initiative I wished I had been a little closer, but did manage to shoot the hive tyrant off the table and do a few wounds to the hive crone before they got up to full speed. 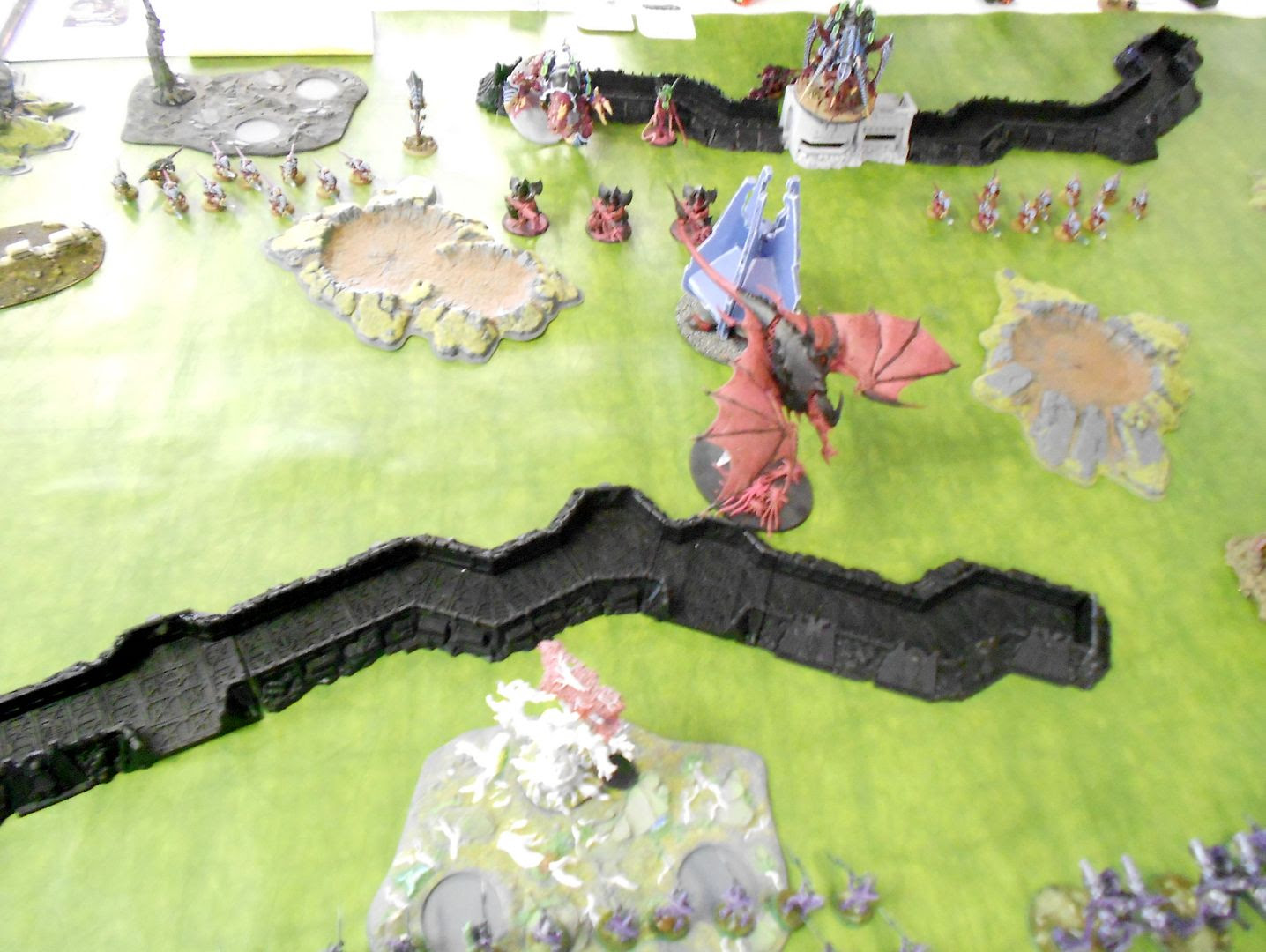 Nids advance, tervigon is exhausted after pumping out five termagants (3,1,1). 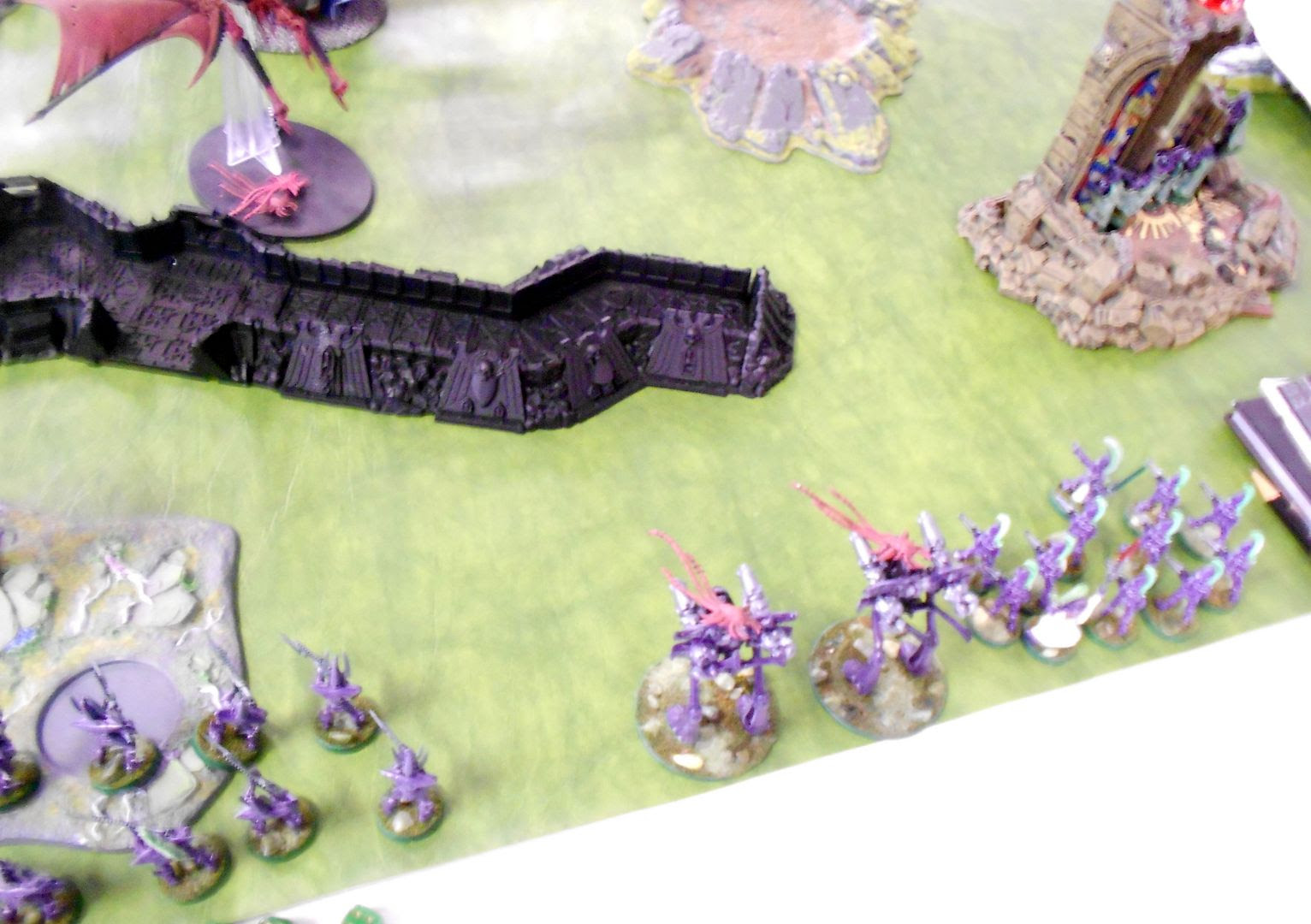 Hive crone shoots haywire bugs at the warwalkers, but misses.  Pull another wound off of the crone with my shooting, but it doesn't ground.  DE warriors kill two hive guard, hawks take out a number of termagants.  At this point Vinnie concedes, disheartened at loosing the tyrant right off the bat and discouraged at the prospect of advancing without a few extra squads of termagants being pumped out.  Disappointing but understandable.

There was also some M:tG going on and a couple games of an X-Wing demo.  The ships do look really cool, but there's only so many money and time pits I can get into at once!

Posted by sonsoftaurus at 10:55 PM