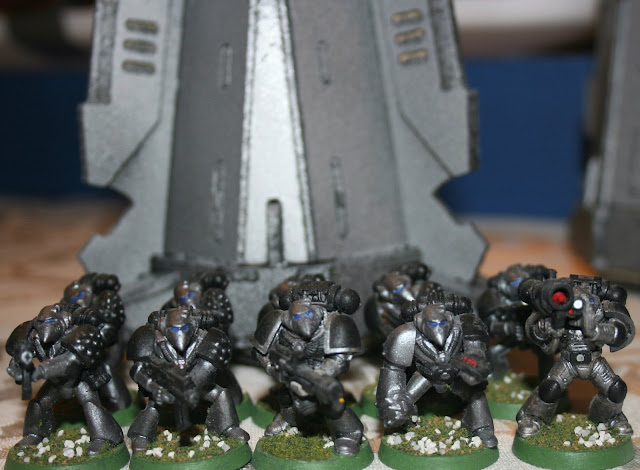 Silver Skulls, Act One
When I got back into 40K in mid-3rd edition, I started collecting stray Chaos figs, but the first actual army I put together was the Silver Skulls.  When I was deciding what Chapter to do it came down to Space Sharks and Silver Skulls, but the Skulls narrowly won out.  I wanted to do an all-beakie (aka Mk VI armor) army, and the force is a mix of old RTB01 box guys, beakie metal figs and more modern plastics with beakie heads. The army has the distinction of having been painted in three countries - the USA of course, as well as Canada and India while I was traveling for work. In fact I bought my 3rd ed. Space Marine codex from a little hobby shop in Kamloops, British Columbia.  I'd enjoyed drop pods in Epic and liked the idea and imagery, so when I saw that 40K SM could do it as well, I was sold on an all-drop pod force and built toward that end.

This was back in the day when drop podding was just deep strike, no model for the pod, no special protections, and deep strike mishaps just killed you - no fancy table that might send you back to reserve or place you somewhere else on the table.  Just dead.  And we had to roll our dice uphill in the snow!  Err, sorry, got carried away there.

Silver Skulls, Act Two
I didn't really use them much at all during 4th edition, but revised them when the 5th edition Space Marine book came out.  I had to add a few guys and reorganize things into ten-man squads and get actual physical pods, but not much changed.  The army went from 1500 in 3rd ed to 1850 in 5th, primarily from the cost of the pods themselves.  I started out with some home-made pods, but switched over to using some from CNC Workshop after finding a cheap ebay deal.

Posted by sonsoftaurus at 5:56 PM